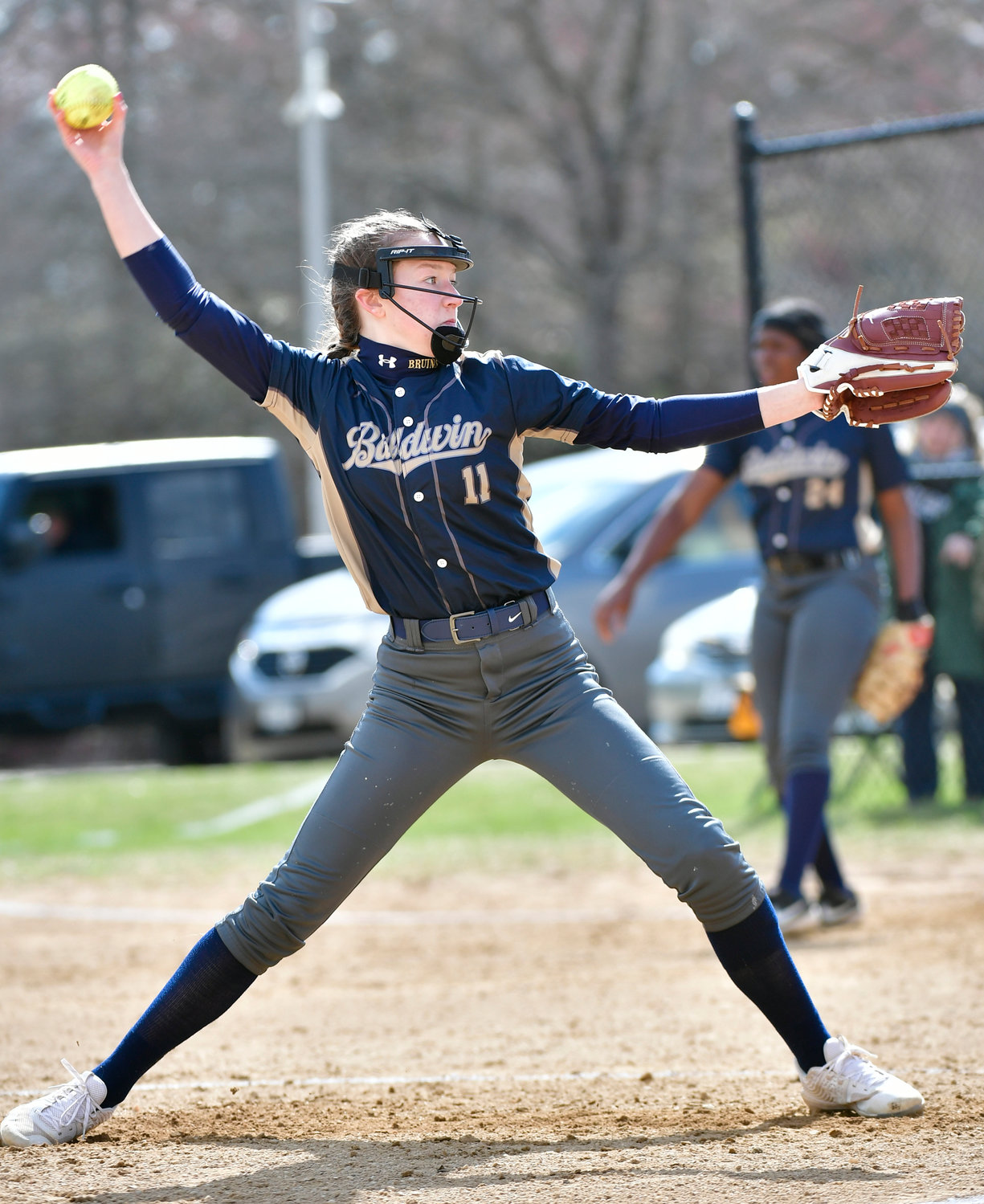 Sophomore Kate Heuser has posted seven wins in the circle as the Bruins’ primary pitcher. She has also shined at the plate.
Anthony Hughes/Herald
By Andrew Coen

A strong finish to the season by the Baldwin softball is laying a solid foundation for next year.

The Lady Bruins entered the final week of the season winners of two of their last three including previously unbeaten Glen Cove and East Rockaway. While the team has already been eliminated from playoff contention, coach Tom Llewellyn is encouraged that the team is peaking late in season with many players set to return in 2023.

“We're surging right now and playing very well,” Llewellyn said. “You want to play your best at the end which we are and the good news is we have 11 girls coming back.”

Baldwin’s late-season success fueled by younger players was evident in a come-from behind 9-8 win at East Rockaway on May 4 when freshman Jadyn Culbreath drove in classmate Erin Timmes for the go-ahead run. Culbreath also smashed a three-run homer earlier in the game.

Junior center fielder Dylan Reyer, who walked to lead off the seventh when Baldwin trailed 7-5, had two hits on the day as part of a season in which she is batting .630. The speedy Reyer is a perfect 14-for-14 in stolen bases while also leading the team in RBIs with 37 and runs scored (24).

“She is having one of the top seasons in the county,” said Llewellyn of Reyer, who earned All-County honors last season. “She has been a big catalyst for us.”

Jess Darcy helped spark the comeback against East Rockaway with a triple that scored Reyer. The junior shortstop, who is hitting .430, anchors the middle infield along with her twin sister Taylor Darcy at second base.

Junior third baseman Emma Grochowski has also been an integral part of the Bruins’ offense with a .435 on-base percentage and leading the team in walks.

Sophomore Kate Heuser has posted seven wins in the circle as the team’s primary pitcher. She has also shined at the plate registering a hit and scoring two runs in a 13-6 victory at Glen Cove on April 30.

“She is starting to hit her spots,” said Llewellyn of his ace pitcher. “She is our pitcher for the next two years so we are set up nicely there.”

Baldwin, which entered the week at 8-8 overall, is looking to achieve the program’s second straight winning season. The team’s 2022 campaign has featured some heartbreaking defeats including a 6-4 loss to Jericho on April 22 in which it held a 4-2 lead going into the final inning.

After hosting Port Washington Monday after press time, Baldwin concludes its season Thursday at Floral Park with first pitch scheduled for 4:30 p.m. Llewellyn said the team remains plenty motivated to end the season strong and set a positive tone for next spring.

“They are always trying to get better and are working hard,” he said. “They are a dangerous team now knocking other teams off and eliminating other teams. There is a lot of heart with this team.”