Baldwinite has kindness repaid to her 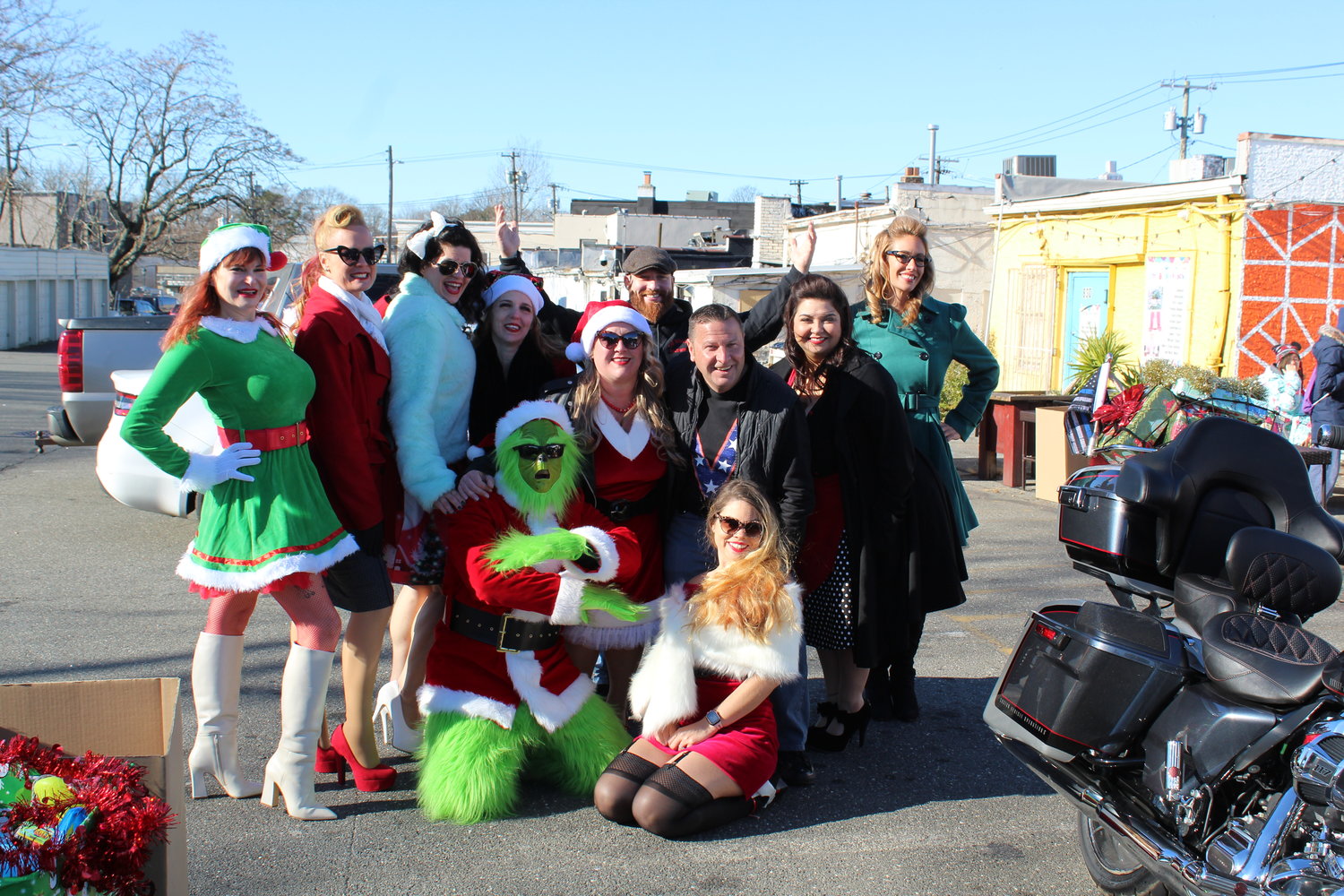 The grinch road in on his motorcycle to spread cheer with the Rescue Vixens, Shawn Sabel, center, and Steven Burke, third from right.
Karina Kovac/Herald

They’ve done so much for this community, not just today but in general.”
Erin Brown, resident
For more information on the organizations present contact:

-Angela Lucas at hangout1happyplace@gmail.com or the Hangout One Happy Place Facebook Page.

-Stop in at the Irish Pub on 834 Merrick Rd, Baldwin and ask for Shawn Sabel.

The Irish Pub in Baldwin saw local residents and business owners come together for two good causes Dec. 12: to contribute to Toys for Tots, a program sponsored by the U.S. Marine Corps, and to help Baldwin resident Erin Brown, who suffers from debilitating liver disease, and her family with ongoing medical expenses.

The Baldwin Hot Rod Association, Hangout One Happy Place, a local group that offers recreational activities for teens and young adults with special needs, and the Rescue Vixens, a cat-rescue group, packed the pub to donate toys, hold a 50/50 fundraising raffle and gather donations for Brown’s biweekly medical procedures.

The procedures include paracentesis, which drains fluid buildup from the abdomen. Brown, in her late 40s, said every two to three weeks on Friday doctors remove 9 liters of fluid. Because of the frequency of this procedure, Brown’s insurance stopped covering it, saying she had exceeded the 32-service limit.

“Bills were piling up…and this was a procedure I had to get done,” she said. The procedure got her through the pain, she said, “one minute at a time, and now it’s an hour at a time.”

Assisting in fundraisers for Thank-A-Cop, a multi-community Facebook group that asks the public to give back to police officers in any way they can, Irish Pub owner Shawn Sabel has long been involved in neighborhood fund-raising efforts and school events around Baldwin.

Brown was preparing a food and drink package donation at her home for donation to Thank-A-Cop in August last year to give to neighborhood police officers when she lifted a Gatorade case and heard a pop. She soon learned from her doctor that she had a hernia and complications from gallbladder surgery in her 20s that caused nonalcoholic steatohepatitis, or inflammation caused by the buildup of fat in the liver.

When Sabel called offering to help raise funds for Brown a few weeks before the event, she hesitated, saying that she appreciated he was thinking of her and her family, “but there are so many other people in this world going through so much.”

She said she soon realized that she shouldn’t be ashamed of her illness, however, and gradually she agreed. As of Sunday, $2,500 had been raised, with people still contacting Sabel to help.

“It takes a village to help people get through tough times. She’s in our prayers,” fundraiser attendee Michelle Welks said of Brown, for whom many people she did not know came up to show their support.

Angela Lucas, who is with the Happy One Hangout Place, had her group of teens and adults with special needs help with decorating and socializing with the public at the fundraiser.

The Hot Rod Association lined the parking lot with classic cars and custom motorcycles to draw people in. And the Rescue Vixens gave an added flair to the affair with their vintage pip-up dresses, hairdos and pumps.

Seeing dozens of attendees, Brown said. “There is always good in everybody…I have a great support, the people at the Irish Pub and the Hot Rod Association, my job, my coworkers, my family.”

Brown asked Sabel to see if he were interested in helping with Thank-A-Cop, and he “jumped” at the chance, she said. Together, they recently provided meals for more 20 precincts in Nassau and New York City. Sabel and Brown also made dinner for NYPD’s 14th Precinct in Midtown Manhattan on Thanksgiving this year. The Irish Pub will keep assisting Thank-A-Cop.

Steven Burke, one of the founders of the Baldwin Hot Rod Association, and Angela Lucas, the founder of Hangout One Happy Place, initially met at a Memorial Day parade earlier in the year. Lucas told the Herald that “he can’t get enough” of the teens and young adults in the program, giving them tasks at the fundraiser like decorating the Toys for Tots boxes and helping to sell the 50/50 raffle.

After being hospitalized in the intensive care unit at South Shore University Hospital in Bay Shore last year, suffering from septic shock because of high ammonia levels in her body, resulting in some memory loss, Brown said she has “new outlook on life. I was given a second chance.”