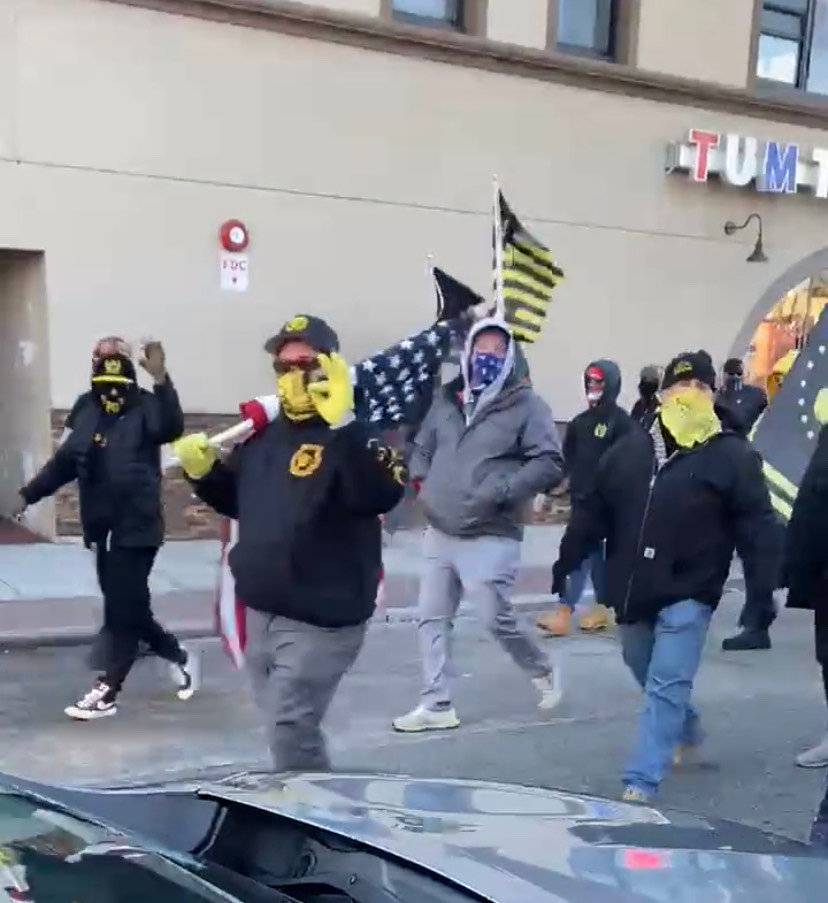 The far-right political group the Proud Boys made a surprise march through the streets of Rockville Centre last weekend during Small Business Saturday.

About 20 representatives of the group marched, many flashing the OK sign, which has become associated with “white power” and was labeled a symbol of hate by the Anti-Defamation League in 2019. As they marched, many handed out fliers near local businesses promoting messages such as “minimal government,” “anti-racial guilt,” “venerate the housewife” and “reinstate the spirit of Western chauvinism.” And in addition to American flags, some marchers waved “Don’t Tread on Me” flags.

In response to the march, a gathering was planned to denounce hate on the steps of Central Synagogue-Beth Emeth on Wednesday at 6:30 p.m., after the Herald went to press. Attendees were encouraged to bring flashlights to symbolize shining a light together.

The Proud Boys march sparked outrage from many residents and elected officials. In an email to the Herald, the Rockville Centre Democratic Club said that hate has no place in the village, and urged elected officials, regardless of their party, to “denounce this despicable action and ensure that it never happens again.”

“We are appalled by the march by neo-fascists last Saturday in Rockville Centre,” club members wrote. “We question why the march was allowed to proceed without a permit, and why our village was selected as a site for the Proud Boys to spew their message of hate including white supremacy hand signals.”

In a tweet, State Sen. Todd Kaminsky, a Democrat from Long Beach, shared a video of the group marching at the intersection of North Park Avenue and Merrick Road, a few blocks from his office.

“I think the latest elections emboldened them — I don’t remember this happening before,” Kaminsky tweeted. “I will not be silent. Their hatred has no place here — this is not the Nassau I know. Who else will speak up?”

“Rockville Centre police were able to ensure that this small protest, whose organizers never sought a permit, was mostly orderly,” Mayor Francis X. Murray said in a statement released on Sunday morning. “The entirety of the protest was less than an hour. Our village is made up of decent, law-abiding residents that denounce groups that spread hate and seek to divide us. I’m confident and grateful that extremist groups like the Proud Boys won’t find support from me or our community.”

“It is extremely concerning that the far-right, neo-fascist Proud Boys held a march through Rockville Centre this afternoon,” State Assemblywoman Judy Griffin, a Democrat from Rockville Centre, said. “Organized groups that espouse violence and hate should not be welcome in our communities.”

Nassau County Legislator Debra Mulé, a Democrat from Freeport, called the march a “brazen display of hatred,” and called it “disturbing.”

“Now is the time to condemn vile bigotry wherever it emerges and come together to declare loudly and clearly that hate has no place in Rockville Centre or anywhere else in our county,” Mulé said.

“I am disgusted that this took place in our district,” U.S. Rep. Kathleen Rice, a Democrat from Garden City, tweeted on Saturday. “I will continue to fight against racism, hatred and white nationalism while serving as your representative.”

The Proud Boys are designated as a hate group by the Southern Poverty Law Center for their self-described “western chauvinism.”

The group took part in the Unite the Right rally in Charlottesville, Va., in August 2017, when chants of “white power” and “Jews will not replace us” were heard throughout the weekend. Several members and supporters of the New York and national chapters were indicted for allegedly storming the U.S. Capitol during the Jan. 6 riot.

Many of the group’s members marched through Bay Shore in October.