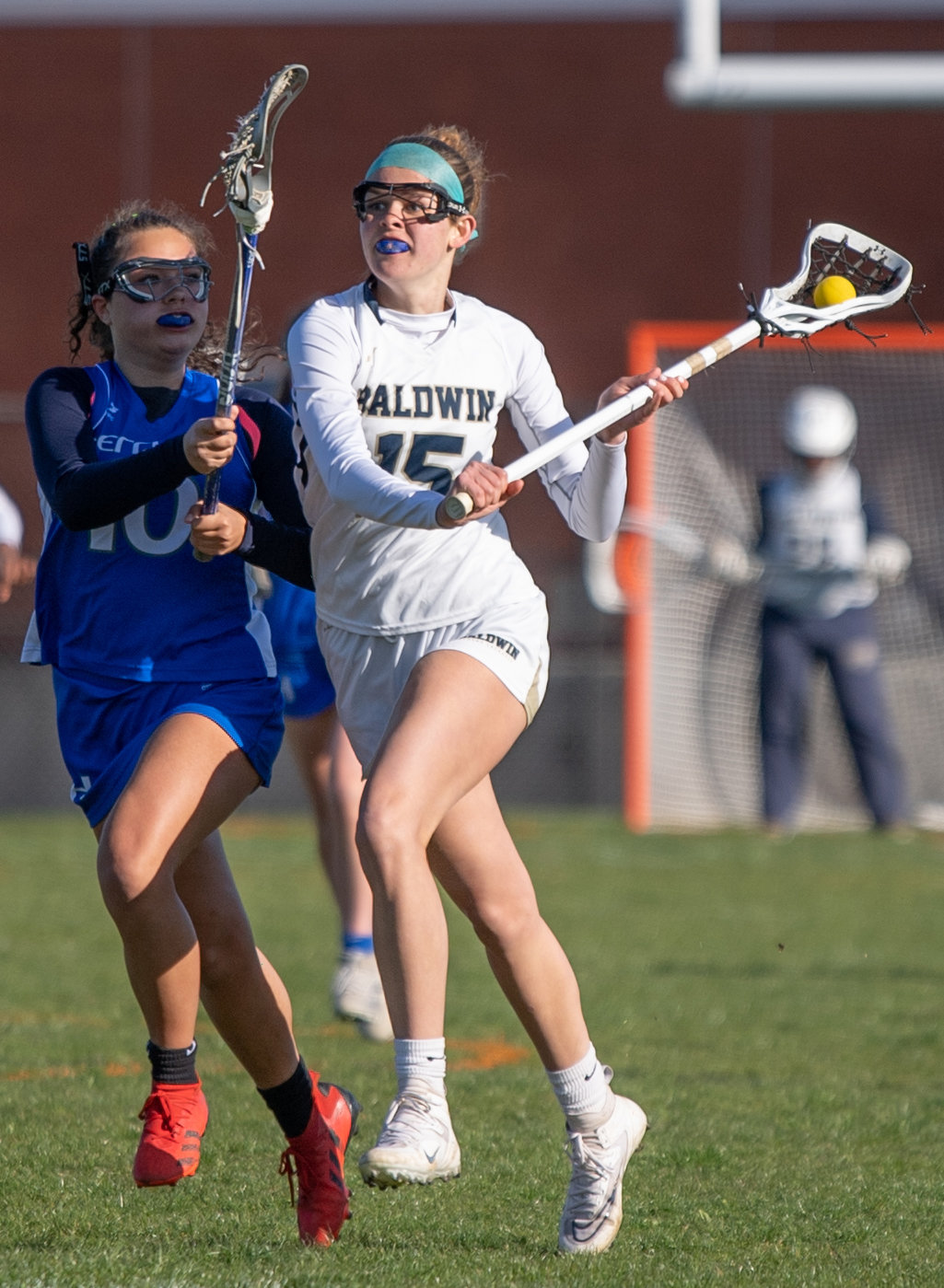 What was supposed to be a rebuilding year for the Baldwin girls’ lacrosse team has suddenly turned into a potential Cinderella story.

Sophomore Emma Ryan scored three times, and seventh-grader Kaitlin Timmes and senior Amanda Antoine added key goals in the second half as Baldwin exacted revenge on Conference IV-foe Jericho and advanced to the second round of the Nassau County Class B playoffs with an 8-6 victory last Saturday.

Senior Kirsten Mahler had two goals and eighth grader C.J. Keryc also scored for the Bruins, who lost 9-3 at Jericho nearly two weeks ago. That day, the Jayhawks jumped out to a 6-1 halftime lead before cruising to a 9-3 victory behind seven goals from star Mark Kate Person.

Person, who finished with a county-best 88 goals, was held to just three in the rematch.

“When we found out we were playing Jericho, we went back to see where we were missing out on beating them,” Baldwin coach Rebecca LaFlare said. “She had seven goals against us, so we knew we needed to lock her off and that’s where we tweaked it. We had to change our zone defense a little bit and it worked. That was a win in itself.”

The start almost repeated itself as Jericho quickly went up 2-0 before Ryan netted her first two about a minute apart to tie it with 12:26 left in the first half. Keryc and Mahler scored later in the session as Baldwin took a 4-3 lead into halftime.

Ryan completed her fourth hat trick of the spring with just over three minutes gone in the second half. Jericho moved to within 5-4 before Timmins restored the Bruins’ two-goal advantage with 11:52 left. The teams traded tallies soon after before Antoine, who scored just twice during the regular season, found the back of the net with 7:41 remaining.

“We just clicked everywhere, on attack, the midfield, our defense played really wonderful, and my goalie was just fired up,” LaFlare said. “She had some awesome saves.”

The pesky Jayhawks again cut the deficit to one with just under three minutes left but couldn’t find the equalizer as the team mobbed senior goalie Maia Goveia immediately after the final horn sounded.

“The last two minutes were so nerve-wracking,” LaFlare said. “We just wanted to make sure we stay composed and we knew if we got the ball, we needed to settle it down.”

The Bruins advanced to the second round for the first time since LaFlare took over in 2013 but the coach was not on the sideline during their second-round matchup against top-seeded and defending champion Garden City (10-3) on Wednesday because was she expected to give birth to her second child days earlier.

Baldwin was at a crossroads after an injury-marred 2021 season when it lost 11 players -- more than half of its roster -- to graduation. But the young nucleus of Timmes (28 goals), Keryc (14), Ryan (19) and fellow sophomore Jasmin Tiong Smith emerged to join forces with the experienced upper classmen to go 5-4 in the conference and 5-6 overall.