Running to honor veterans and the military 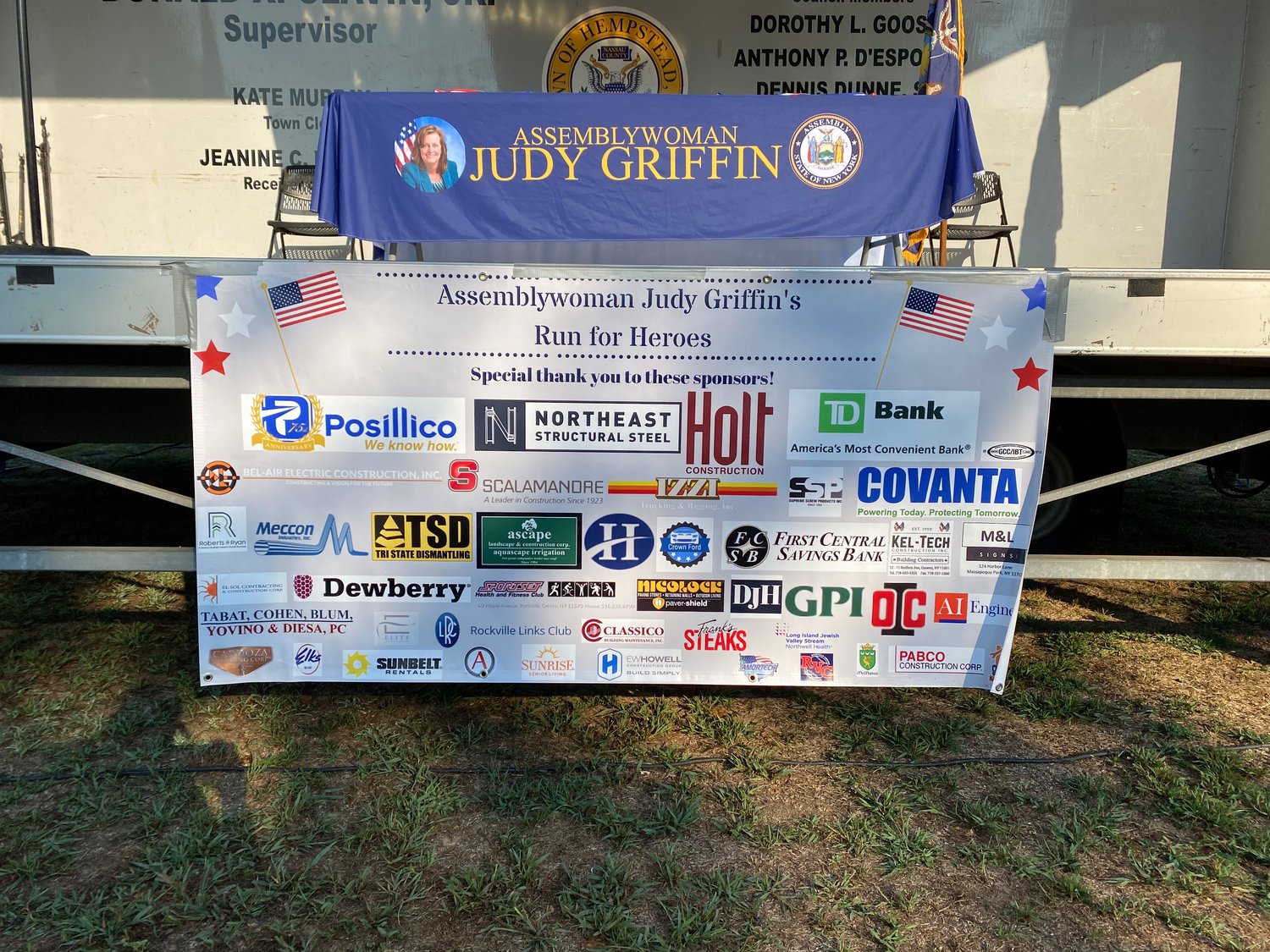 Assemblywoman Judy Griffin hosted the fourth annual Run for Heroes, which attracted more sponsors and participants than ever before.
Andre Silva/Herald 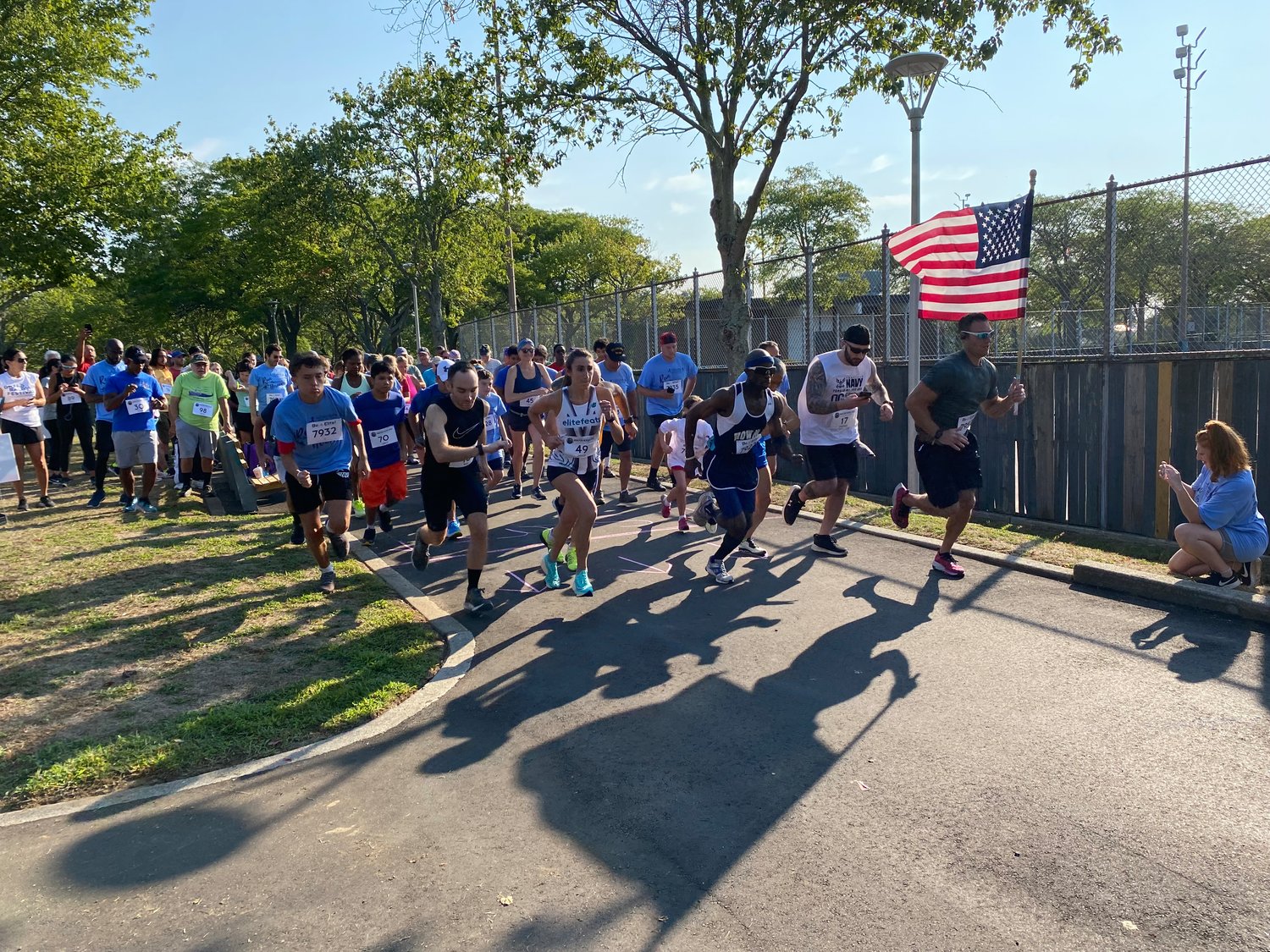 Greg Waxman, holding a flag on the right, Jonathan Davis, to his left, and other participants started the 5K race.
Andre Silva/Herald 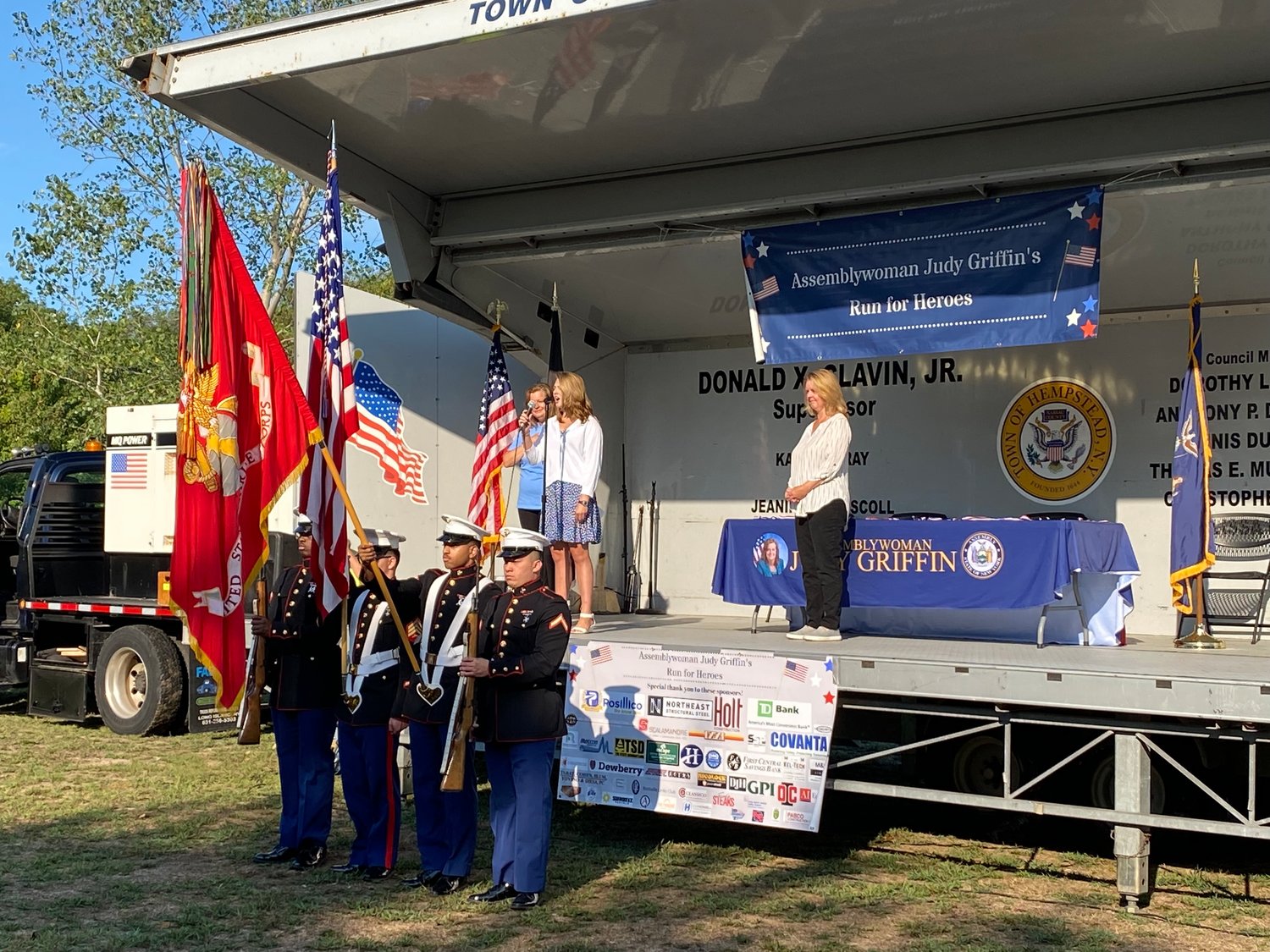 Assemblywoman Judy Griffin spoke before the start of the race.
Andre Silva/Herald
Previous Next
By Andre Silva

As they crossed the finish line, they did not celebrate their personal victories, but instead their support for veterans and military personnel.

More than 100 participants raised money in support of the fourth annual 5K Run for Heroes last Saturday morning in Baldwin Park. Hosted by Assemblywomen Judy Griffin, the event raised over $40,000 for groups like American Legion Post 246 and the Veterans of Foreign Wars.

Sponsors and event staffers manned tents in which runners registered to take part and were offered snacks and refreshments. The racers were a diverse crowd — runners and walkers, adults, children, families, seniors. Before the race, Griffin and a color guard held a small ceremony commemorating the day.

At the start of the race, two men on motorcycles led the runners for about 100 yards before turning off the course. One of the riders was Kevin Tirman, director of Legion Riders Elmont, an offshoot of the Elmont American Legion.

“It’s an honor to be here, and we’d love to do it again,” Tirman said. “One of our riders is running today, and I’m here to support her and all the other veteran organizations.” Tirman said he wanted to make the motorcycle escort of the runners an annual Run for Heroes tradition.

Greg Waxman, of Malverne, finished the race with an American flag held high. Waxman said he tries to run in every race dedicated to veterans; that he has taken part in the 50 Days-Miles for Murph Challenge, honoring the late Navy SEAL Lt. Michael P. Murphy, for the past four years; and that he plans to start his own race in Malverne next year to raise money for veterans.

Waxman said that Run for Heroes is one of his favorite races, because many members of the American Legion and other veterans groups take part. “They took care of us,” he said of veterans, “so we should take care of them when they get home.”

Waxman said he raised $5,500 for the American Legion in Malverne last year, to get a service dog for a veteran. He supports veterans like his grandfather, he said, and regrets not serving in the armed forces when he was younger. To remedy this, he looks for ways to serve his community and shows his support by running.

The second-place finisher, Jonathan Davis, of Hempstead, said he entered Run for Heroes to race and to honor heroes on the eve of the anniversary of Sept. 11. “I’m grateful to be a part of this,” Davis said. “I ran well, and I got to shake hands with some people that are a lot braver than I am. This is my way of saying thank you to those who have sacrificed for our country.”

Likewise, Rob Paskoff, of Lynbrook, a member of the Fortier Family Running Club, said that he and his family took part to support Griffin and her event. Running and supporting veterans groups, Paskoff said, is one way he can honor his father, who served in the military.

Griffin said that the event has grown over the past few years. “Both this year and last year, we’ve gotten a great crowd,” she said. “During the pandemic we had a virtual run, but over the last two years there’s been a big increase in the number of participants and sponsors.”

She said that all the money raised is divided among a number of veterans organizations, to use as they see fit.

Dominick Camendola, a member of Lynbrook American Legion Post 335, was among the runners. Camendola said that he and six other members of the Lynbrook post took part.

“There’s a lot of homeless veterans that need help,” Camendola said. “The money we’re raising goes to a good cause, and it’s good to see veterans supported by their community well after their service.”

Grace Palestino, an elderly Garden City resident, said she and her husband, Dom, came out to support veterans groups like the VFW and American Legion. She said she had supported veterans her entire life: As a child, during World War II, she and a teacher supported the armed forces by knitting scarves.

“My first volunteer work for veterans was when my uncle came back from World War II, Palestino recounted. “I must’ve been 3 years old, and I printed letters to show my support.”

Taking part in the Run for Heroes, she said, is one way she can continue supporting veterans, and although she can’t run like she used to, she and Dom still walked the race.