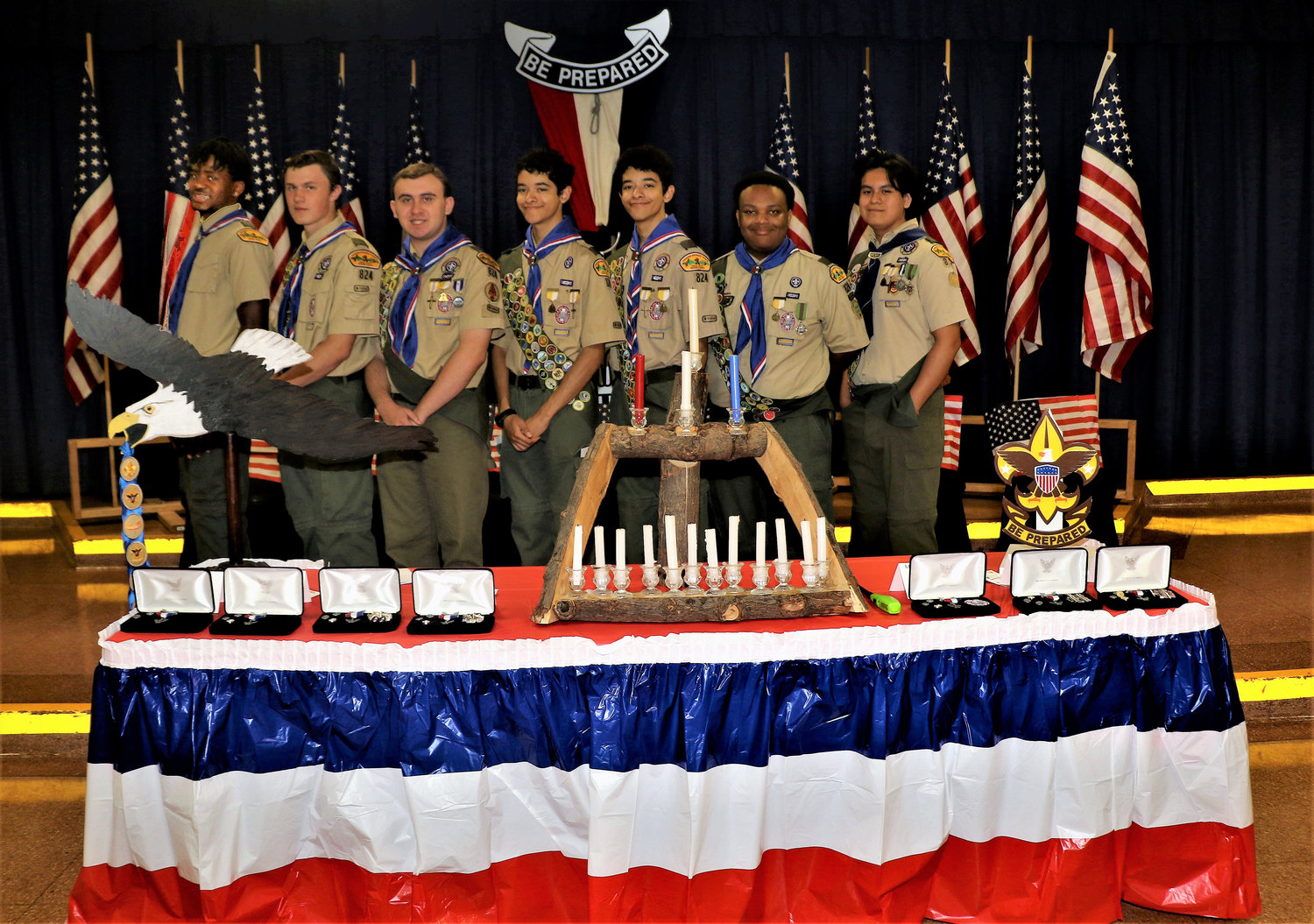 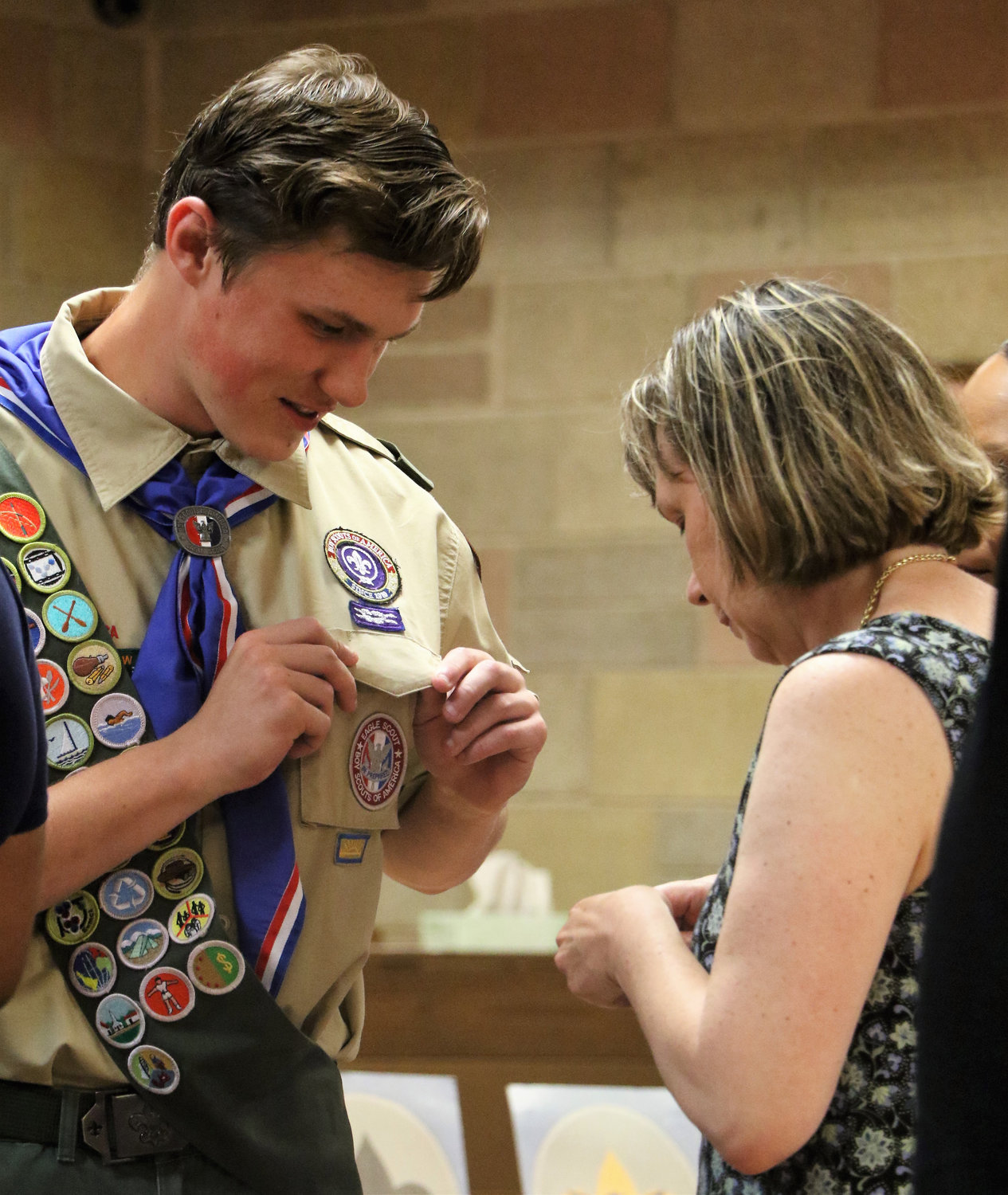 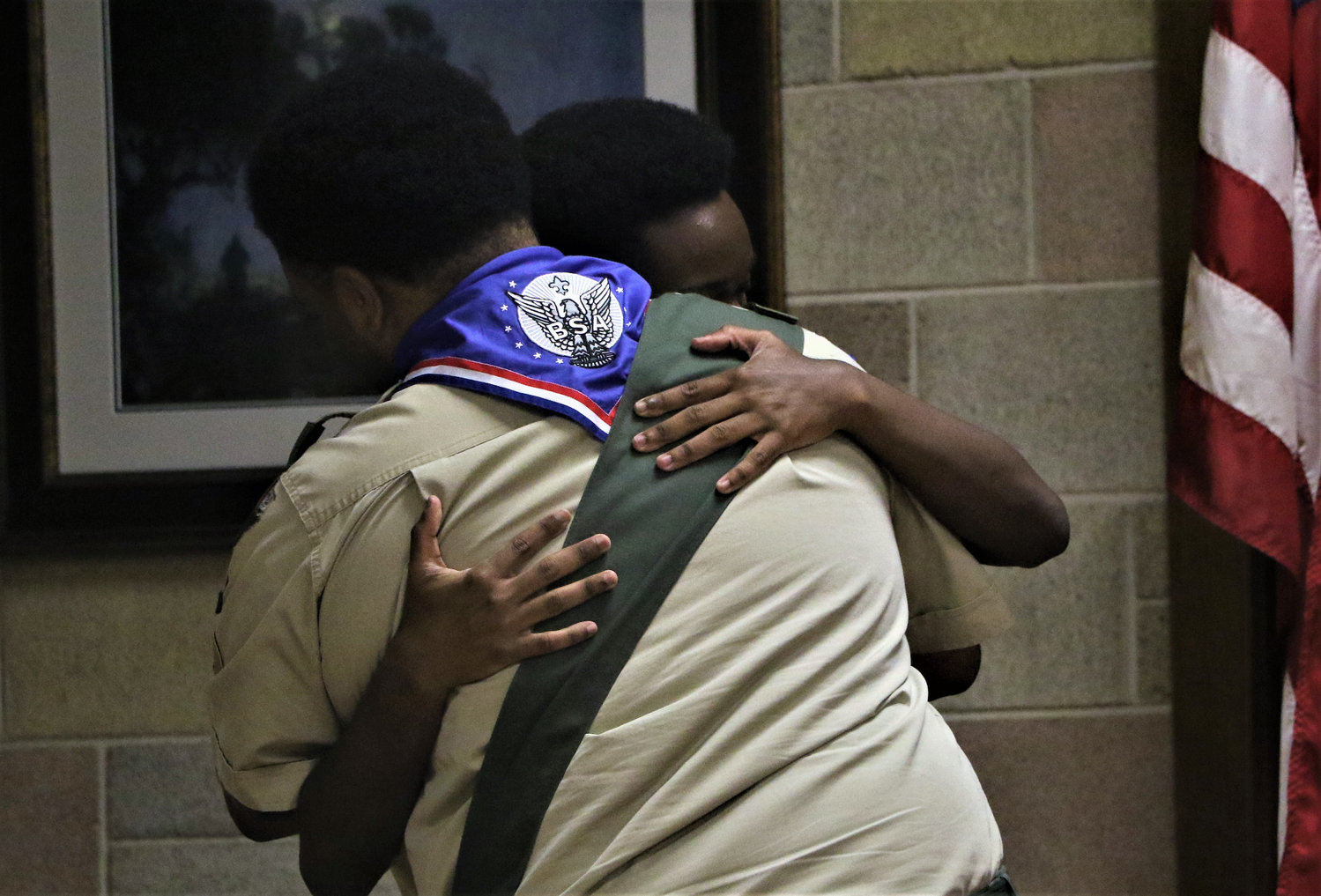 Master of Ceremonies and Eagle Scout Kenneth Bradley receives a big hug and thanks from his brother Trevor J. Bradley.
Maureen Lennon/ Herald photos
Previous Next

I always had a friend here, a community here, even if I didn’t have anywhere else.”
James Evan Kastner, Eagle Scout in Troop 824
By Karina Kovac

It takes a certain individual to be an Eagle Scout. They must display a series of skills, abilities, and characteristics that make them well-rounded contributors to their community and organization. Eight in Troop 824 have reached that honor and were awarded Sunday with numerous certificates, a citation and of course the coveted Eagle Scout medal, badge and Eagle Palms.

Each traversed the path to Eagle Scout, passing through by first becoming a Cub Scout, then a Tenderfoot, 2nd Class, 1st Class, Star, Life and then undertaking the momentous Eagle Scout project to achieve the highest rank in Boy Scouts. Each project untaken individually in the group helped the community it was centered in greatly and will leave a lasting impact.

From the construction of St. Christopher’s vegetable garden in Baldwin to fight food insecurity, benches for librarians to read to children in Uniondale, 104 “Parent Packs” with essential supplies delivered to the Mercy Medical Center newborn intensive care unit in Rockville Center and even the Abaco Island in the Bahamas, which was painfully stuck during Hurricane Dorian and assisted through All Hands and Hearts.

Kastner said none of the good deeds would be possible without the group relying on help and guidance from each other. “We all pushed each other, a lot of it was dependent on each other, everything from our first project to final project it wouldn’t have been done without each other.”

Growing up together in Troop 824, the then boys settled into the young upstanding men they are today and while doing so created lifelong bonds. “I didn’t have many friends, and this was always a place where I could fall back on and rely on. I always had a friend here, a community here, even if I didn’t have anywhere else,” Kastner said.

Twins Antonio and Carlos had to plan their projects strategically, as to not overwhelm themselves and their parents. With a similar concept and different execution Antonio made “Parent Packs” with supplies like toothpaste/toothbrush, activity book with pens, 2 power banks for electronics and other hygienic supplies.

While Carlos equipped 210 learning support kits to special education students at Dodd Middle School of Freeport. The kits enhanced the Chromebooks given by the school to students by fitting them with styluses, a computer mouse, and a headset to provide a more sensory experience. “I worked five hours on planning, and he would work seven hours going to every Dollar Tree in the county just to get all the supplies he needed,” said Carlos.

Mostly a sense of relief was felt by the Eagle Scouts, Bradley told the Herald, especially after completing their respected projects during the pandemic. It took him two years during the pandemic to beautiful Smith Street School in Uniondale. Building two benches and a space for the school librarian to sit and read to children from kindergarten to third grade.

Although his name and troop number are on the bench Bradley said it isn’t about being immortalized, “I don’t do it for myself, I do it for the kids.” With continuing to serve the community in mind, he thinks he may try his hand at being a scout leader in the future.

Eagle charge Larry Vodopivec makes sure that not only are they involved with being a scout, but they also participate in sports, extracurriculars, music and other hobbies and interests in and out of school. “You find that the scouts that does all that is well-rounded and that’s what’s great,” Vodopivec said. If he could offer any advice to the new Eagle Scouts, he would simply say, “keep being who you are.”