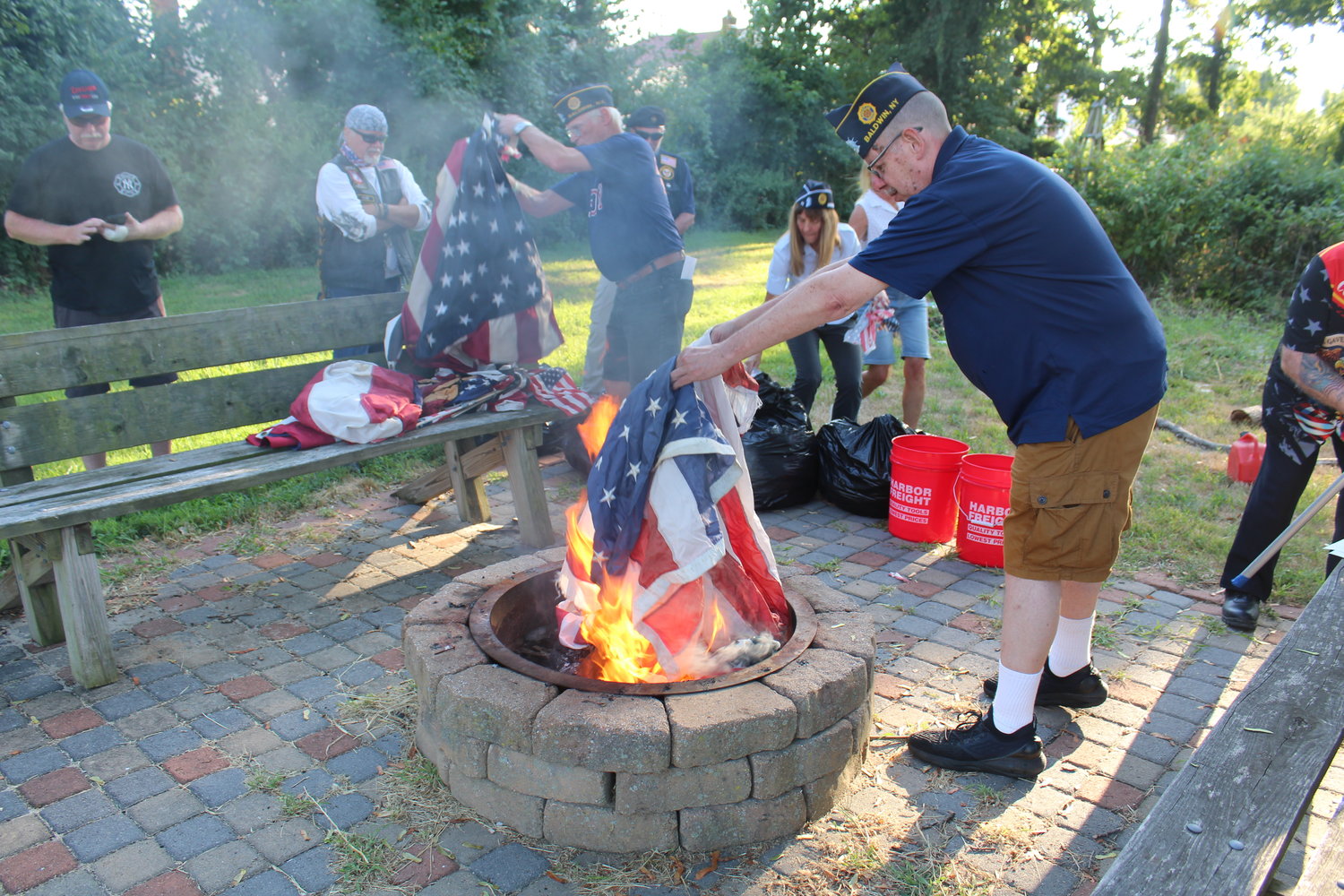 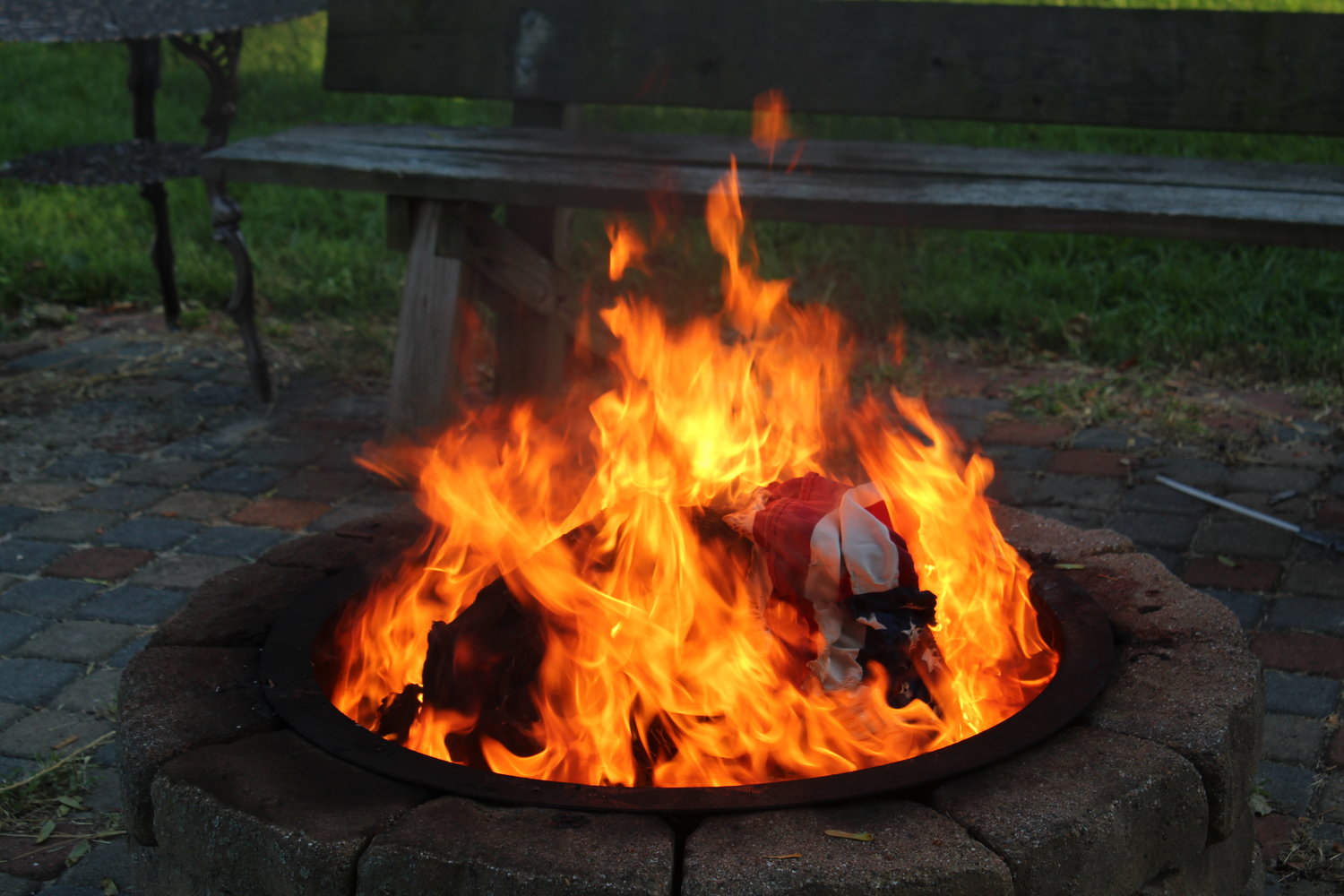 An American flag gets retired in the flames, which is the most respectful and honorable way to dispose of them.
Karina Kovac/ Herald 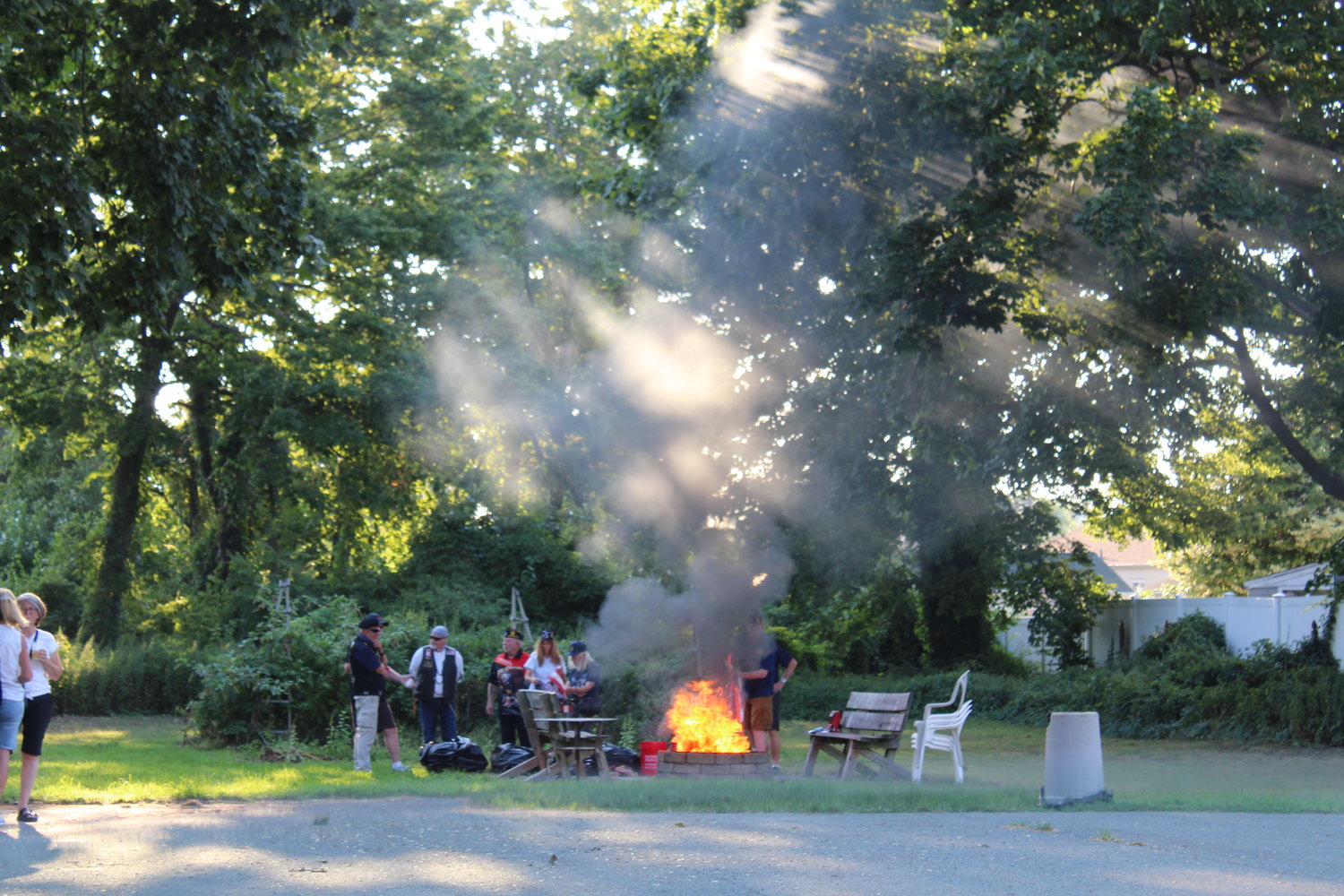 The scene Aug. 11, at the American Legion Post #246 as dozens of flag were properly disposed off after being deemed unserviceable.
Karina Kovac/ Herald 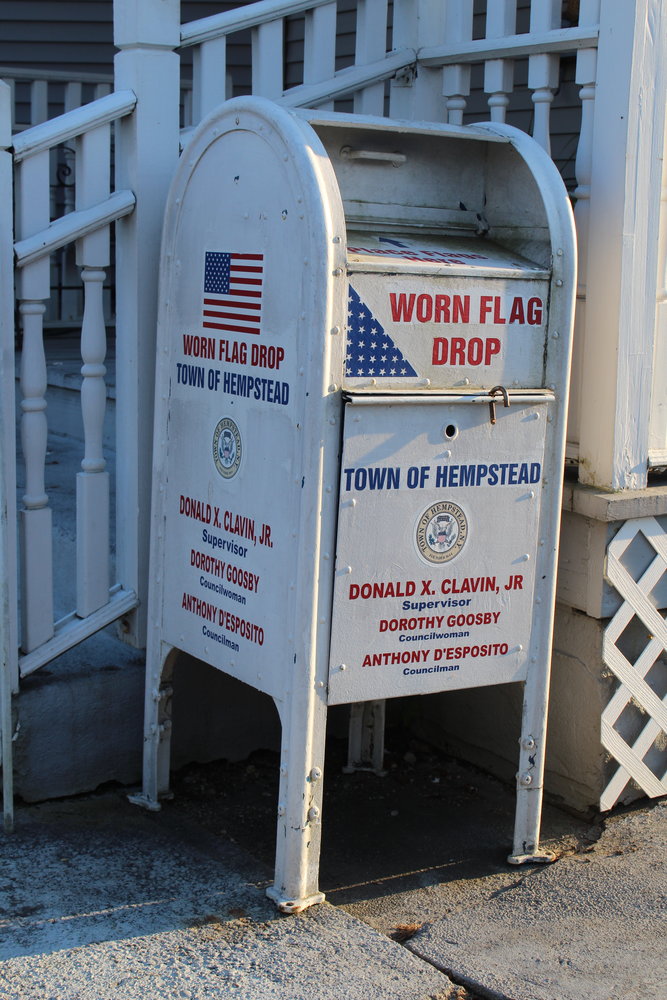 The Worn Flag Drop off box located in the front of American Legion Post #246.
Karina Kovac/ Herald
Previous Next
By Karina Kovac

The American flag is a symbol for bravery, freedom, liberty and the rights of men and women alike. On August 11, the Baldwin American Legion Post #246 underwent the Dignified Disposal of Unserviceable Flags ceremony, which entailed inspecting the flags, determining their need for retirement, and gently placing them into a fiery pit. Spectators watched as red, white and blue transformed into black ash.

The last flag disposal was in June, and since then dozens of new flags have been placed into the Town of Hempstead Worn Flag Drop box located in the front of the legion post. Here individuals and companies can respectfully say goodbye knowing the flags will be properly destroyed.

Bill Forester of the Babylon American Legion Rides attended the ceremony to watch the flags respectfully burn. In his own life he’s “pulled flags out of garbage pails” to make sure they were respectively discarded. One flag he won’t get rid of though is the one he flew at half-mast during Covid for all the lives that were lost. “When covid started I put my flag at half-mast for all the individuals that passed away and I left it up for the year until it frayed, but I saved that flag,” he said.

Seeing flag burnings during protests in the 1980’s, he lived through the changing of flag laws. Before the Fourth of July in 1989, the Supreme Court declared that the government could not stop citizens from desecrating the nation’s flag. In the case of Texas v. Johnson, it was determined that the federal and state laws that protect the flag are in violation of free speech.

Forester, during the same time, was attending college and voicing his opinion in a paper he wrote, “regarding an amendment to the constitution saying its against that law to burn the flag except in a retirement manor, the professor gave me a good grade for the write up, but the content… he didn’t like the ideology,” he said. “I stopped going to college after that.”

Going back to the history of flag rules, in 1923, the National Flag Conference met in Washington to discuss how to properly fly the flag. Its members created the Flag Code, which states that “the flag represents a living country and is itself considered a living thing.” The American Legion passed a resolution about flag retirement ceremonies in 1937, and they’ve been an important ritual ever since.

According to the resolution passed, “The approved method of disposing of unserviceable flags has long been that they be destroyed by burning.”