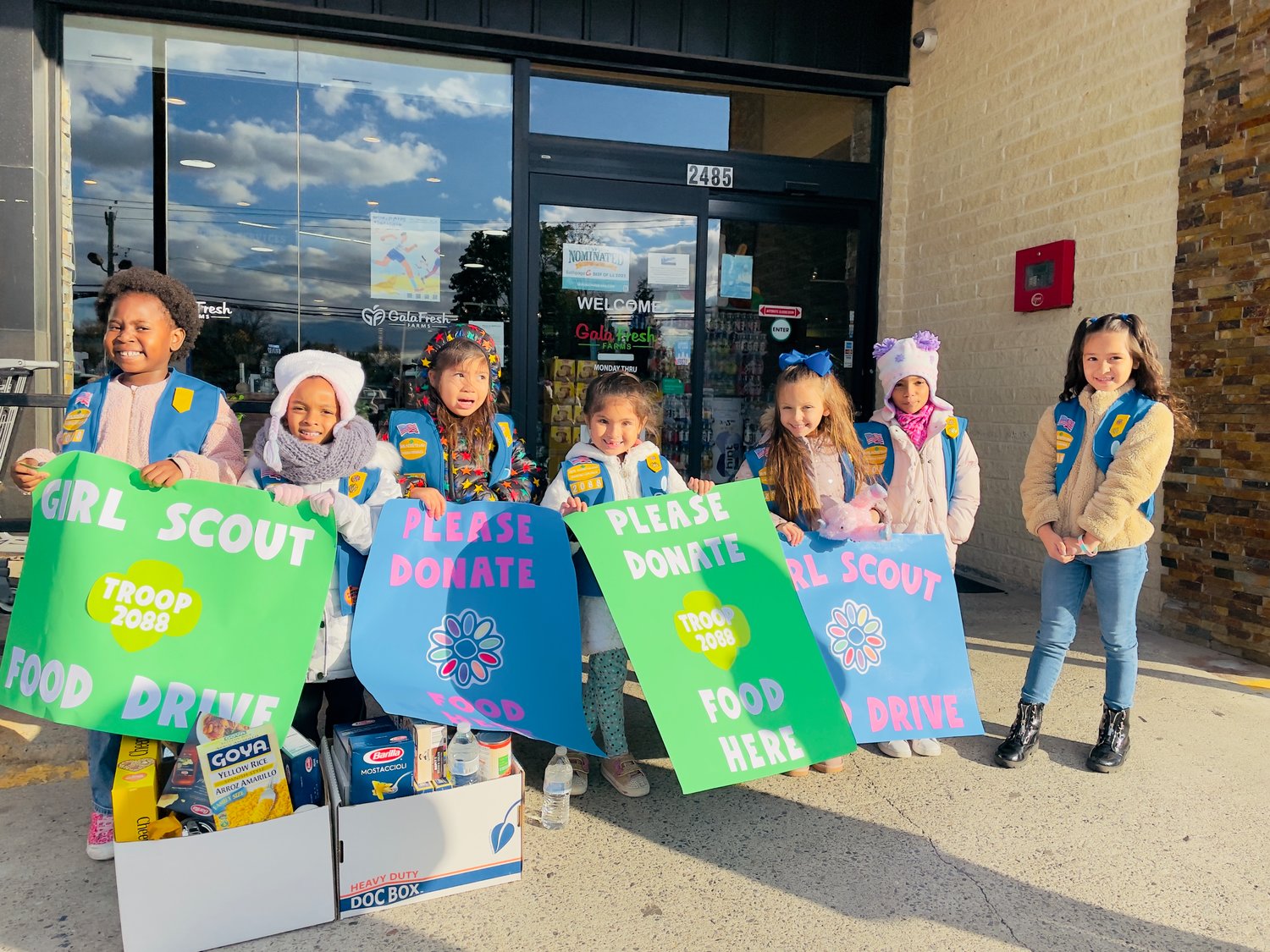 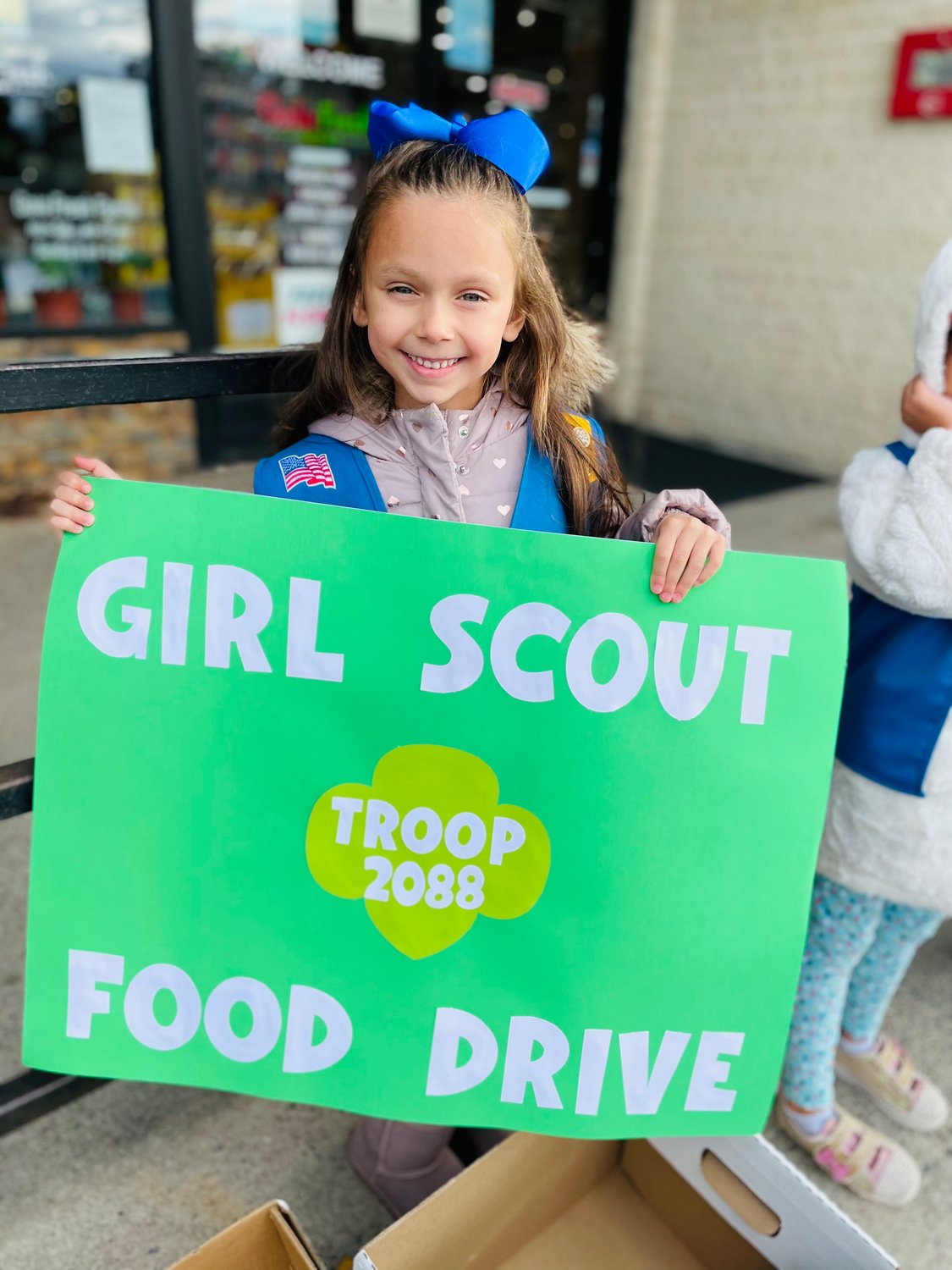 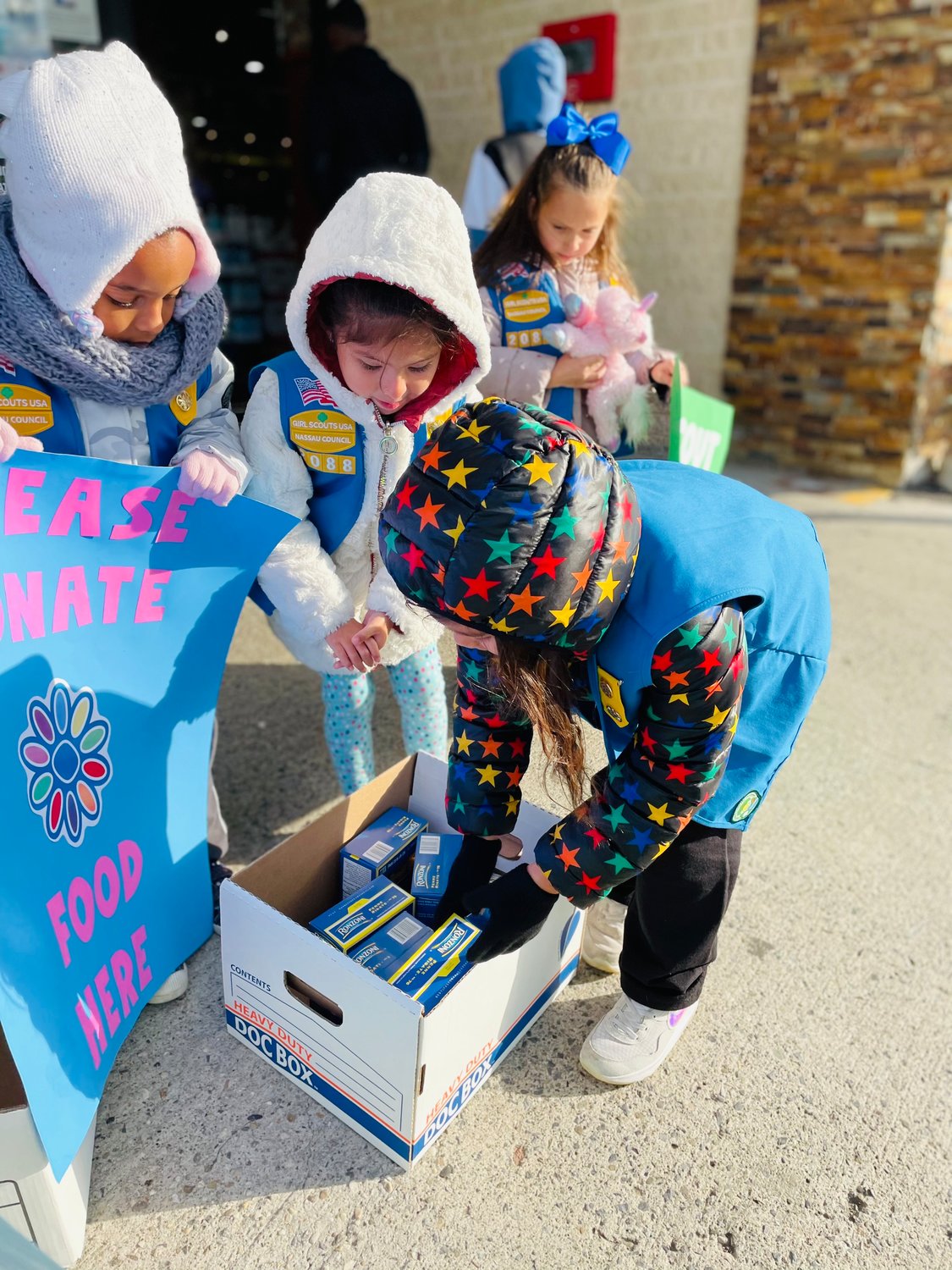 Iwanted them to see that the holidays are more than just that. It’s also about giving to others.”
Nicole Ricca Co-leader, Baldwin Daisy Girl Scout Troop 2088
By Andre Silva

On Nov. 13, the Daisies helped with the pantry’s Baldwin Service Unit Food Drive outside the Gala Fresh supermarket on Grand Avenue.

Members of Troop 2088, 6-year-old Baldwin first-graders, stood outside the supermarket for the afternoon, collecting nonperishable food items for the St. Christopher’s facility. They also collected monetary donations to purchase additional food to donate.

Nicole Ricca, a co-leader of the troop, which is just two months old, said this was the first time it had participated in a community service event. Ricca said she was inspired to get involved with the Girl Scouts when her grandmother Pauline Burke died last year. Burke, Ricca said, was a Girl Scout leader in her community when Burke's children were growing up, and when she died, Ricca was inspired to share the values her grandmother taught her with her children and others. She said she got the Daisies involved with this event to teach them the value of making a difference in their community.

“I think, during the holiday season, kids tend to focus on receiving presents, decorating and other festivities,” Ricca said. “I wanted them to see that the holidays are more than just that. It’s also about giving to others.”

Her charges collected more than four large boxes of food and over $75 in donations for the St. Christopher’s pantry. For their service, the Daisies were awarded a food drive fun patch and a yellow petal, symbolizing a willingness to be helpful and friendly, for their daisies.

The Girl Scout daisy is a large patch that is filled in with petals throughout the year, as the girl’s complete activities and receive commendations. Each petal is a different color, and the Girl Scout’s will earn and wear them on their blue daisy vests and uniform up until its completion.

“The girls flashed signs at customers to collect donations, and were eager to help others in need in their community,” Ricca said. “I think they really understood the impact of their service, and I believe it was really fulfilling for them.”

Jada said she was happy to help feed the needy through her service. “My favorite part of the day was seeing the boxes get filled with food for the hungry,” she said.

Kaylee said she was also proud to help those in need, and that it made her happy to serve the community, because she would be sad if she didn’t have access to food. “So I’m happy to give food to others,” she said.

“I feel very proud to be a Girl Scout,” Kaylee added. “I learned to be kind and helpful, and learned that it’s nice to give food to the hungry.”

Olivia Baque said she was happy to help in any way she could. “My favorite part of the day was being there with my fellow Girl Scouts,” she said. “I learned to help out.”

Celina said that being part of the community service event meant a lot to her because she wants to give back to people that aren’t as lucky as her to have food. “I learned that it’s important to give back to others, she said. “They need to have a happy Thanksgiving too.”

She said she was also really excited to start the cookie-selling season in December. “I can’t wait to sell cookies, Celina said. “My goal is to sell at least 14 boxes.”

Ricca said that along with the cookies, the troop will offer the Gift of Caring option for those who don’t buy them, but choose instead to donate them to military personnel.