A celebration of life and faith at Congregation Ohav Shalom 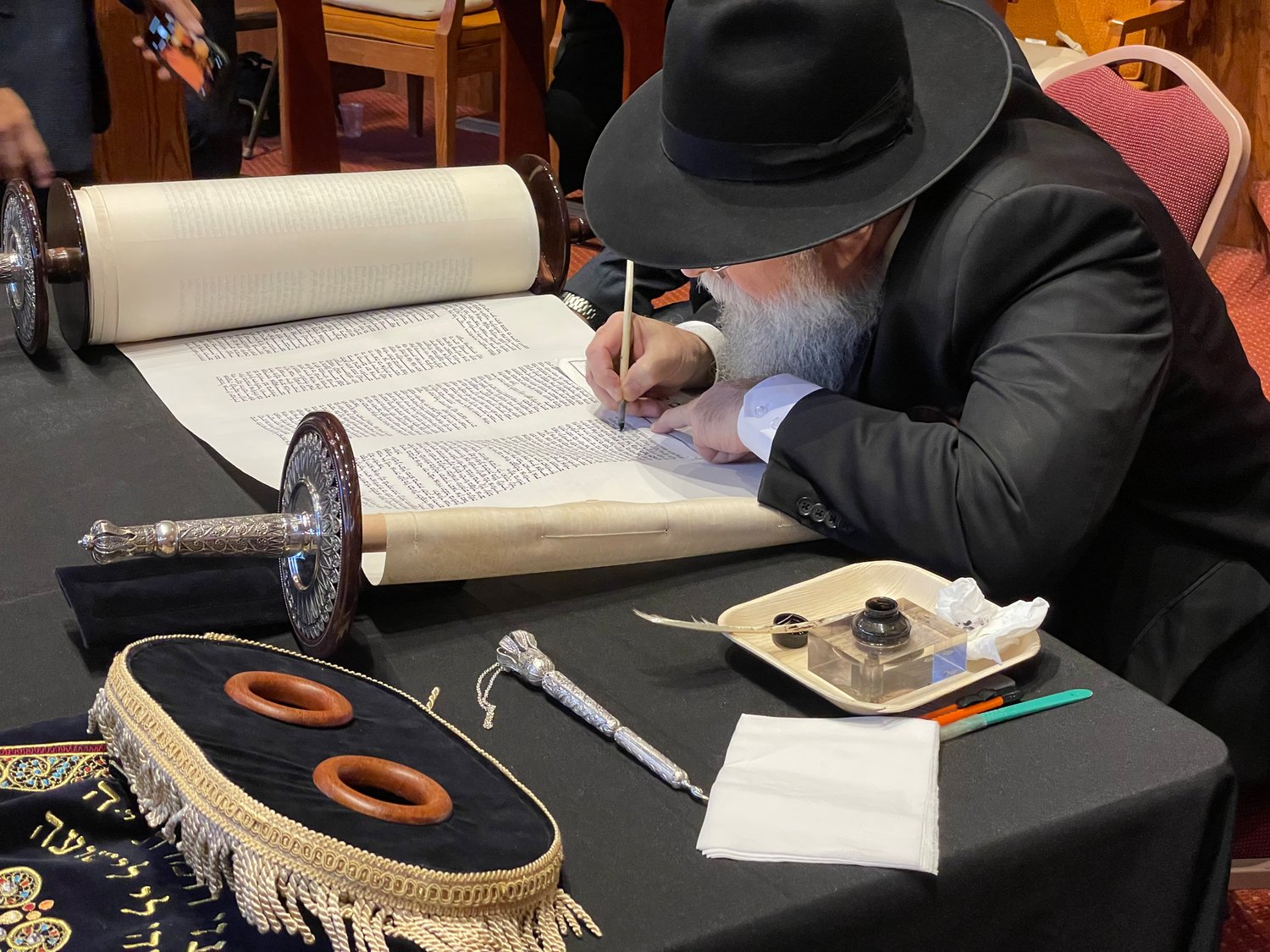 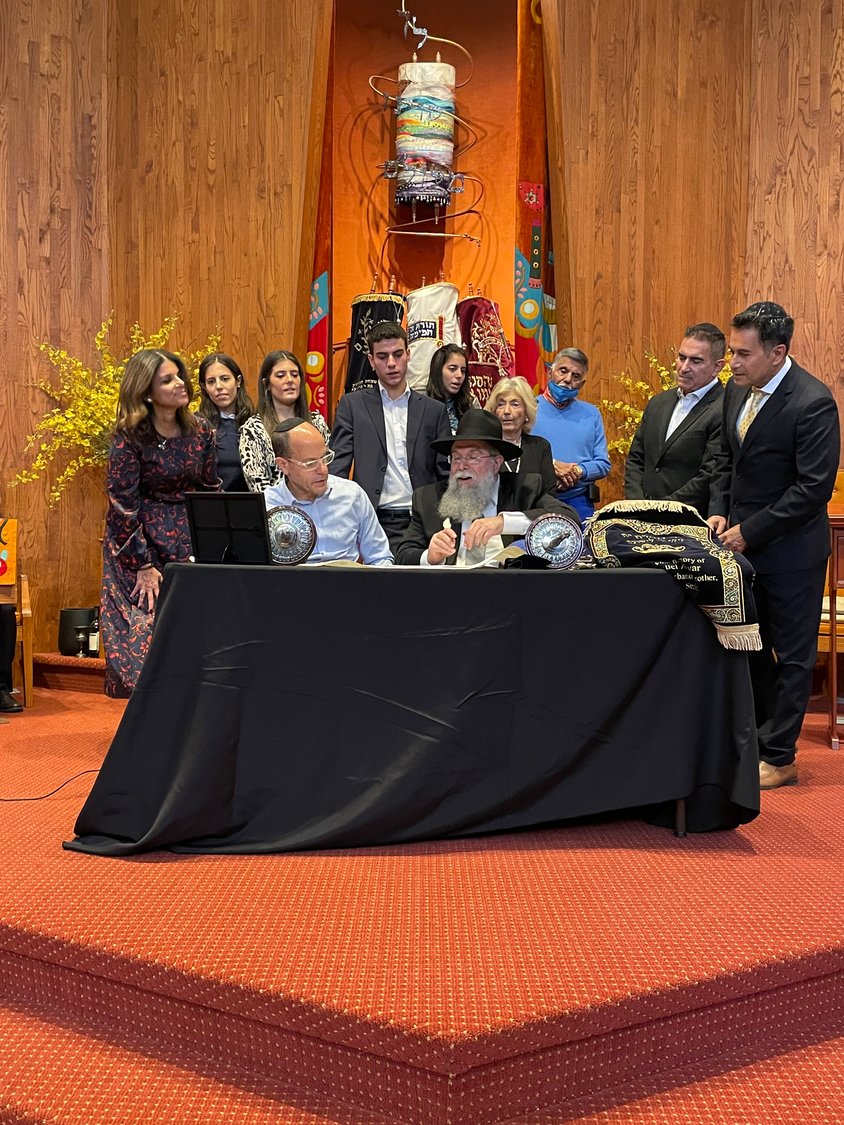 Samuel Adwar’s extended family witnessed the writing of the final letters of the Torah, which took over a year to complete.
Jordan Vallone/Herald 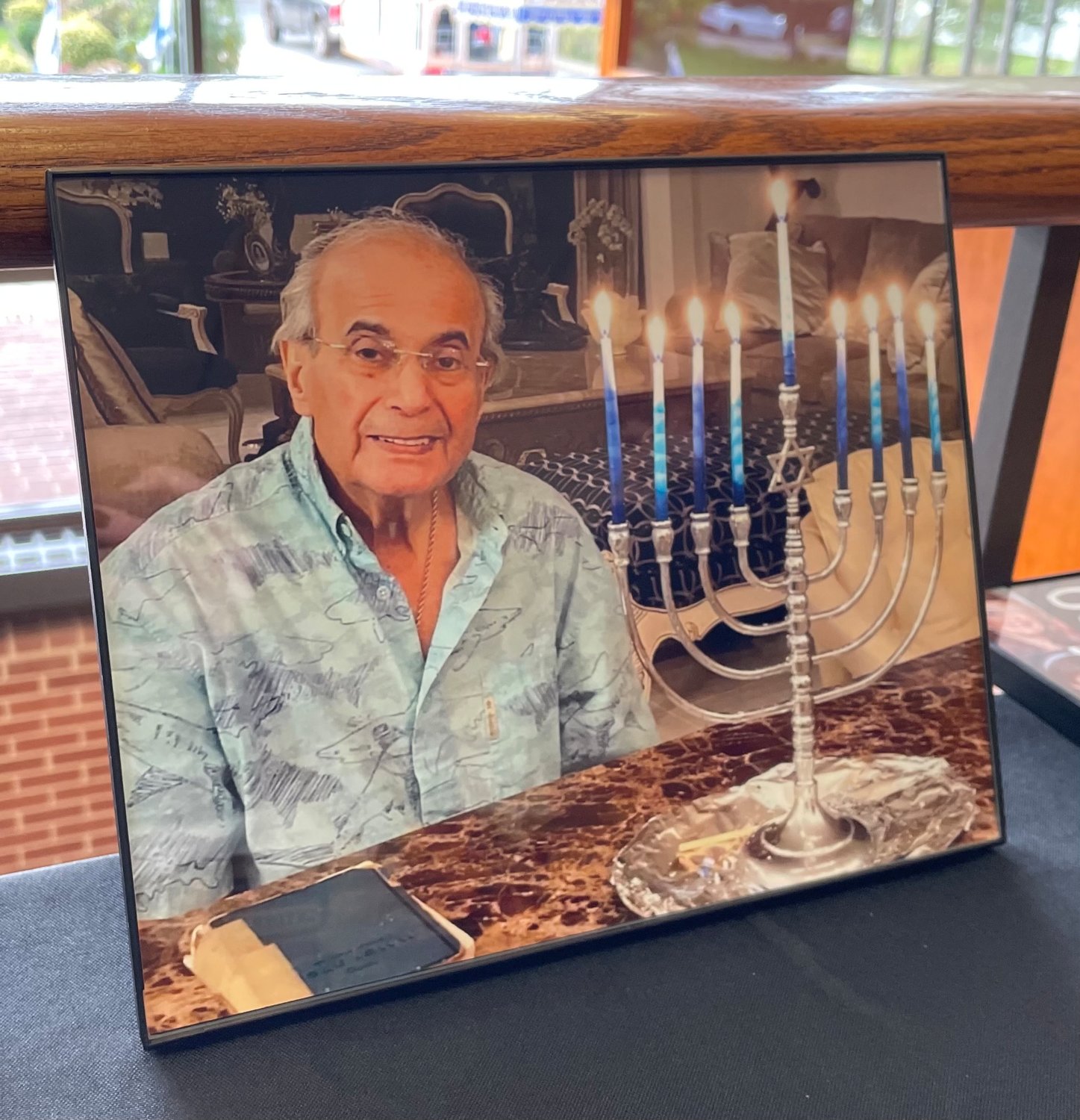 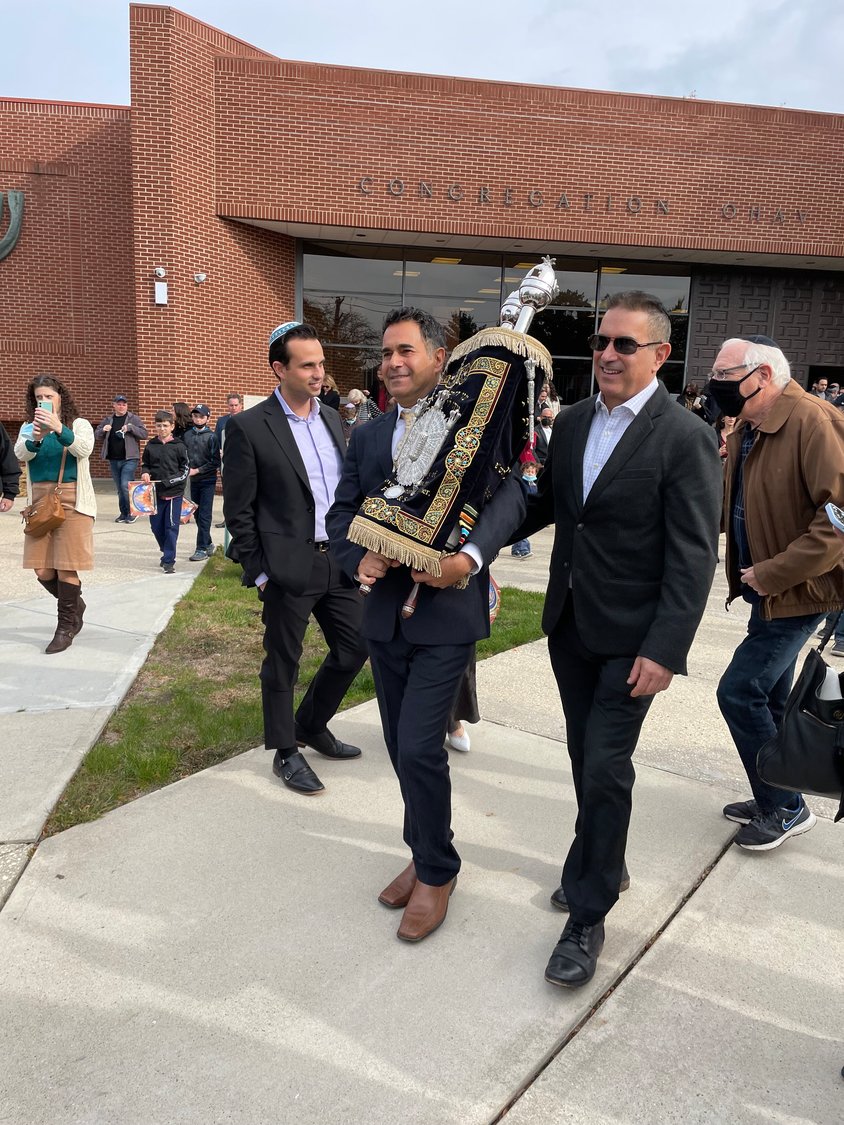 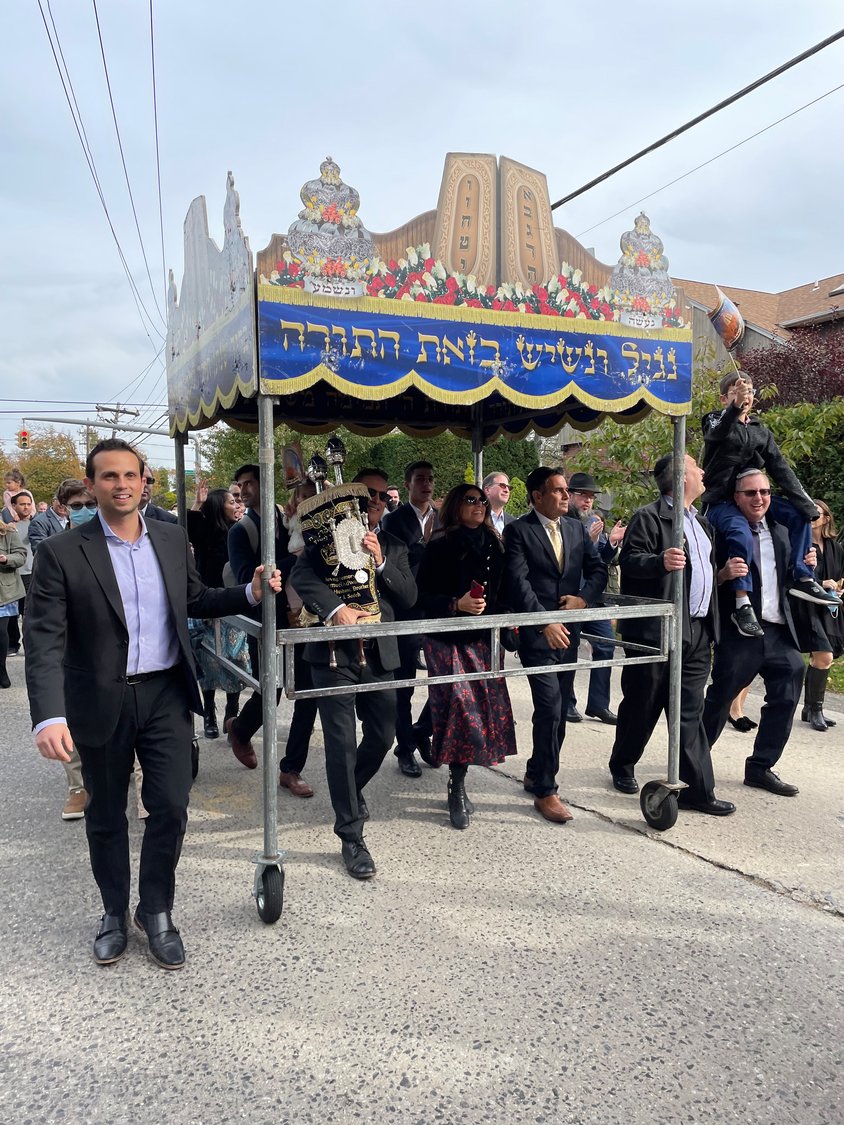 Family and congregation members paraded through Merrick with the Torah.
Jordan Vallone/Herald 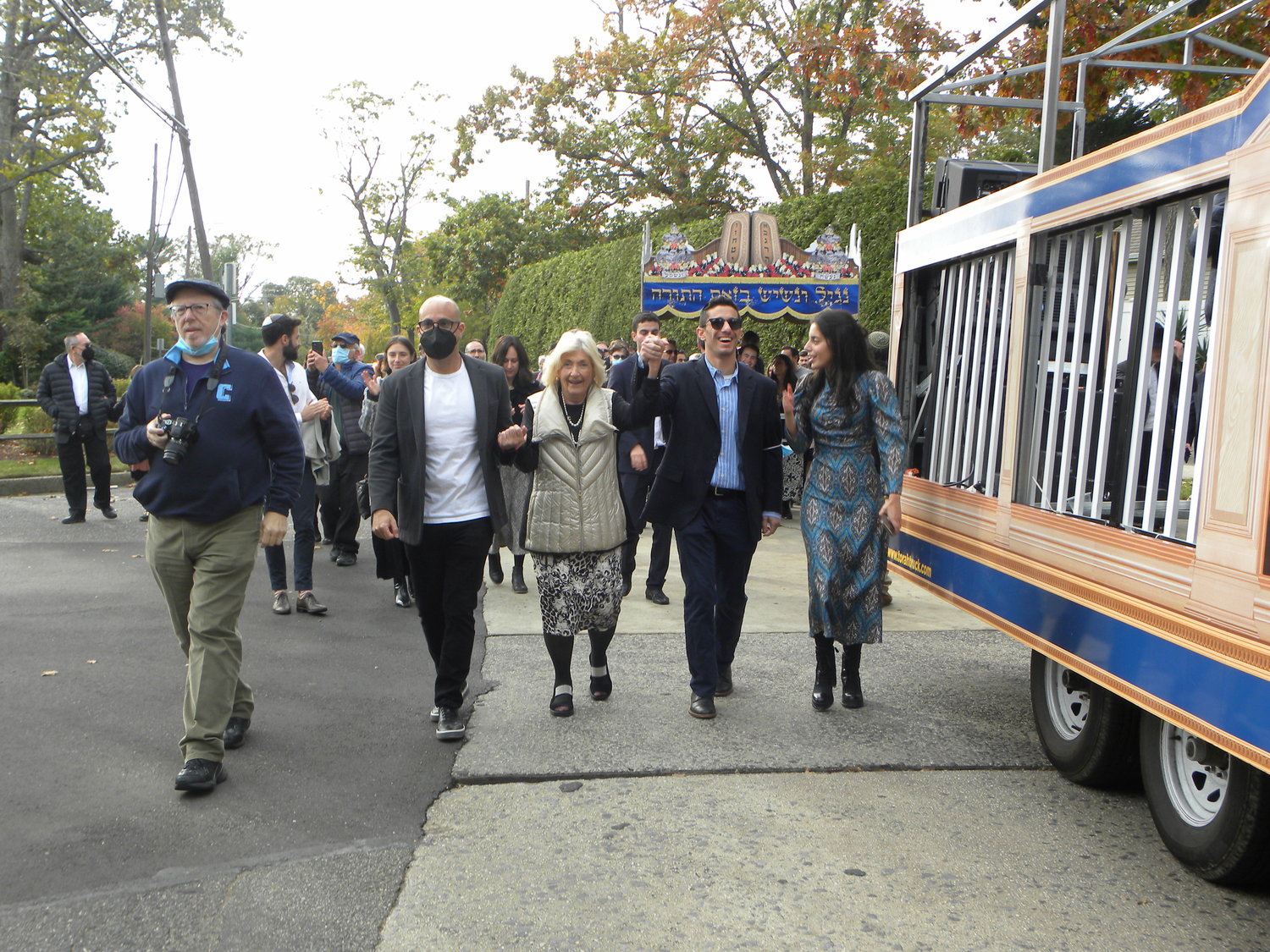 Adwar’s wife, Trudy, second from left, danced with members of the community and her granddaughter, Samantha Breslauer, right.
Jordan Vallone/Herald 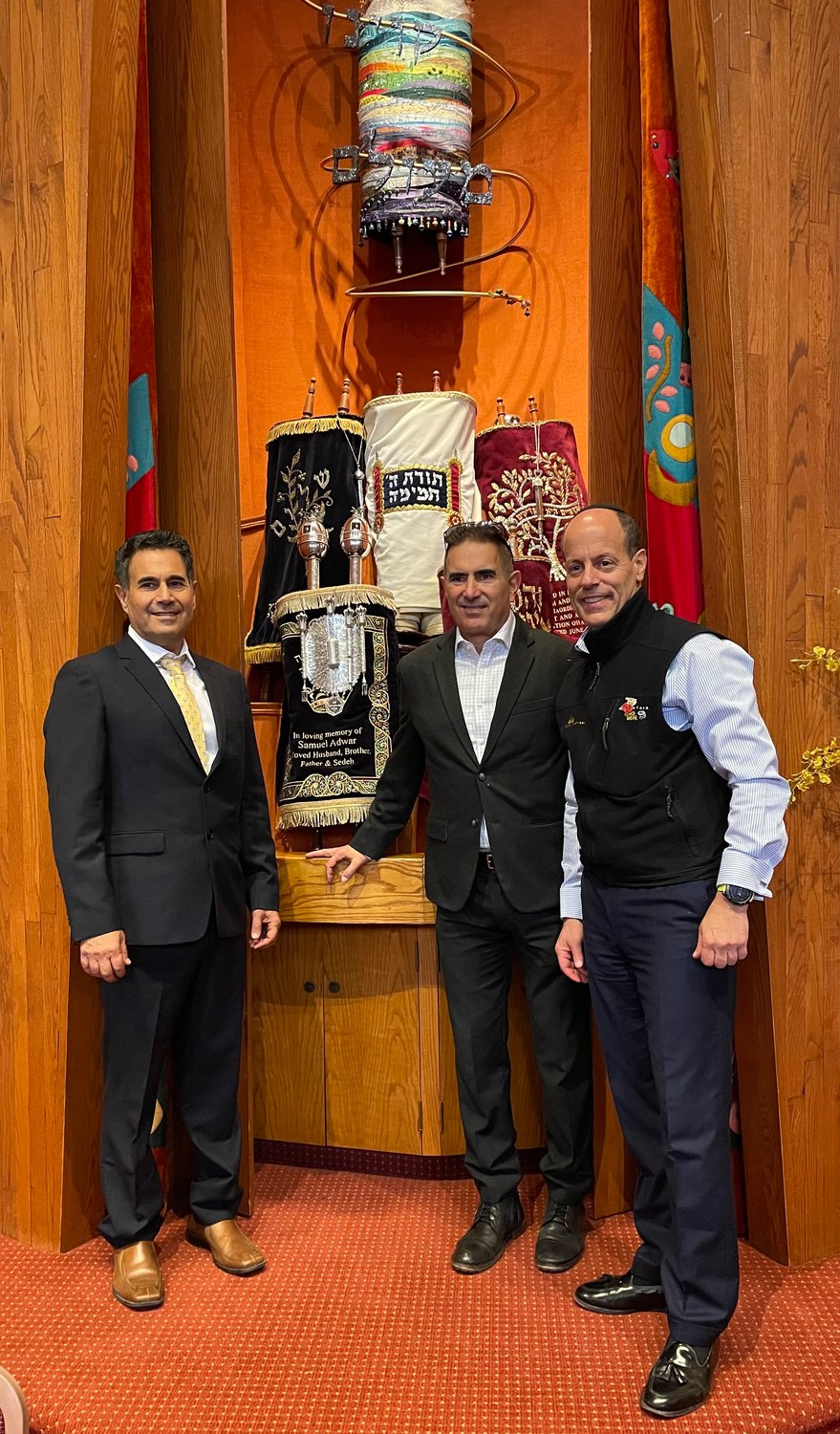 After the parade, Gary Adwar, Michael Adwar and Keith Breslauer placed the new Torah alongside the congregation’s other Torahs.
Jordan Vallone/Herald
Previous Next
By Jordan Vallone

It was a day of faith, family and community last Sunday, as Congregation Ohav Shalom, in Merrick, celebrated the arrival and completion of a new Sefer Torah. The Torah — which took more than a year to complete — was given to the synagogue by the family of Samuel Adwar, a longtime Merrick resident and congregation member who died last year at 85.

“The Torah scroll is one of the most sacred objects in Jewish ritual,” Rabbi Ira Ebbin explained. “It is written meticulously by a scribe with a quill — the parchment is cowhide. It has been this way for thousands of years.

“It has to be written by an expert scribe,” Ebbin went on. “It takes nearly a year to complete. This particular scroll was written in Israel, picked by the [Adwar family].”

The Sefer Torah — which means “Book of the Torah” — is the Jewish bible, comprising the five books of Moses. It contains more than 600,000 letters that must be handwritten by a Jewish scribe, known as a sofer, according to Ebbin.

Though this particular Torah was started in Israel, Rabbi Heshy Pincus, a renowned sofer from Brooklyn, completed roughly the last 100 letters in front of a joyous, grateful and receptive congregation of Merrick and Bellmore residents.

To further connect the writing process to the congregation, members of Adwar’s family and other “honored members” of the congregation were invited to sit with Pincus, and ceremonially appointed him to write letters on their behalf.

Congregation Ohav Shalom, affectionately referred to by Ebbin as the “Bellmore-Merrick synagogue,” was founded in the 1960s. Ebbin, who has been the rabbi for the past 12 years, said that the “vibrant, exciting, modern Orthodox synagogue” is “passionate about Judaism and passionate about the community.”

Given that the process of writing a new Torah is so meticulous, for many people of the Jewish faith, witnessing the finalization of one can be a once-in-a-lifetime experience. Congregation Ohav Shalom had not received a new Torah in more than 25 years, according to Ebbin.

The Adwar family, of Yemenite origin, sponsored the creation of the Torah, and gathered for the event in Samuel’s honor. Yemenite Jewish traditions differ slightly from those of other ethnic Jewish groups, evident in their music, dancing and other customs. The Torah in Adwar’s memory, adorned in vibrant colors with large, silver finishes, reflected some of these differences.

Rabbi Uziel Admoni, a relative of Adwar’s, said that the “Adwar family are giving people” who continue to “support kids in Israel.”

Also in attendance from the family were Adwar’s brother, Harry; Samuel’s wife, Trudy; their sons, Michael and Gary; their daughter and son-in-law, Lauren and Keith Breslauer, and many other relatives.

“My father-in-law passed away a year and a half ago,” Keith Breslauer told the Herald. “This is a way of continuing his memory — every time they use the Torah on a Saturday, on a holiday, it commemorates his blessing, so that’s why we did it.

“I asked, ‘Can we do anything?’” Breslauer recounted of when Adwar died. “The rabbi said, ‘We need another Sefer Torah.’ It is written in a very special way, by a very top [sofer] — so when you read it, it’s very clear. It makes it very easy to read the Torah.”

Adwar’s grandson Aaron Breslauer told the congregation how this Torah related to his late grandfather. “When a Sefer Torah is given to us — God gave it to us just once,” Aaron said. “But we should pass this on to generations to come — to teach it to our families, to our friends, to the people around us, and the only way to really do this is to be passionate about the Torah.

Following the completion of the Torah, the family and congregation paraded through the streets of Merrick behind a large float. The completed Torah was carried by various members of Adwar’s family, under a large canopy that was walked behind the float. There was traditional Yemenite music, and the family and congregation danced and celebrated their new Torah, and the life of Adwar, who, according to Ebbin, was truly a “cherished member of the community.”

“This event today represents everything that was important to my friend Sammy Adwar,” Ebbin said. “Family, the Torah, the shul, Yemenite music — Sammy loved everything about being Jewish. He loved the Jewish people — he had such purity to him.