All of 12, and live from Citi Field

Kidcaster gets his time to shine 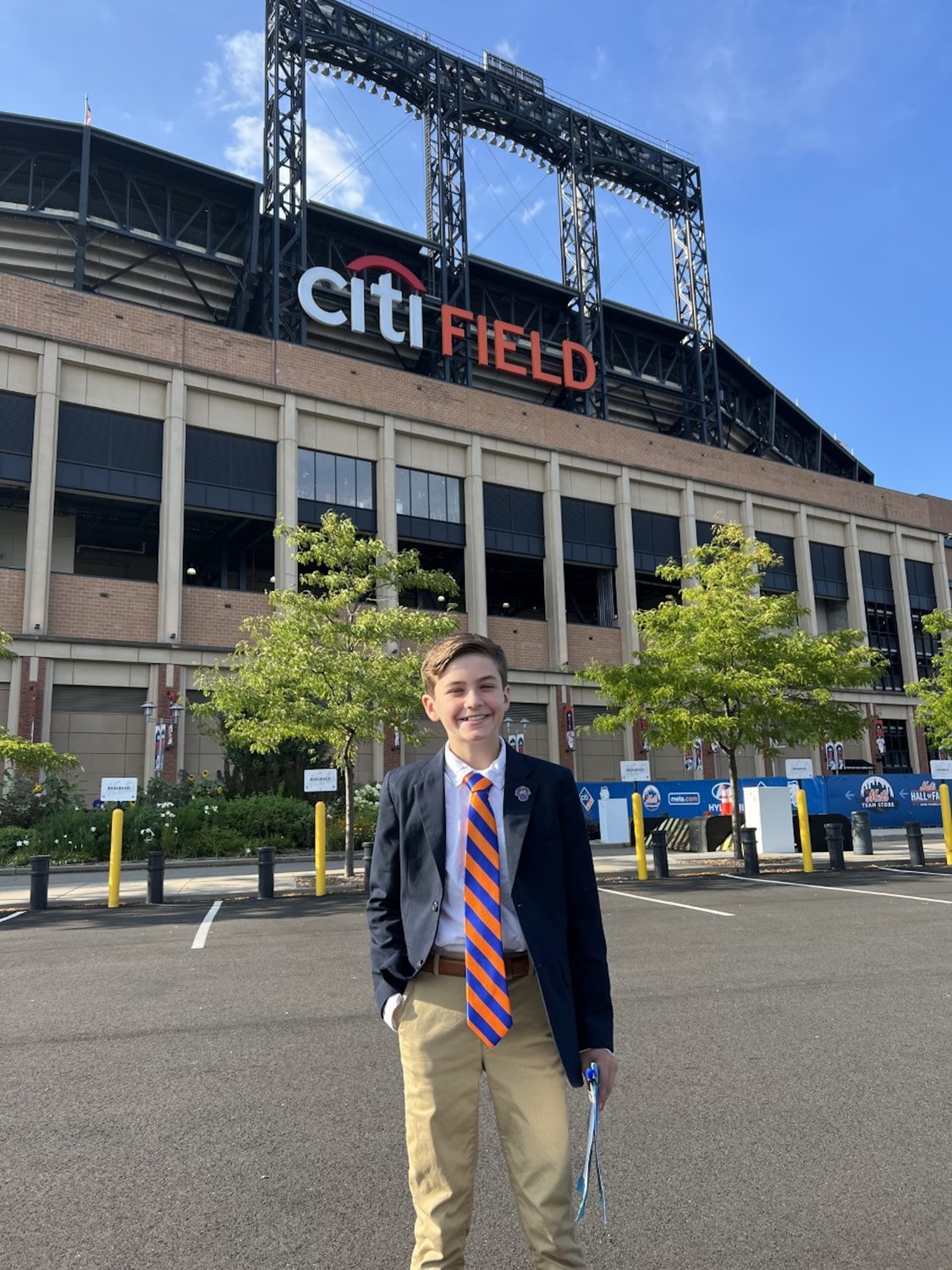 Eddie Kraus, 12, of North Bellmore, was SportsNet New York’s 2022 Kidcaster. Two weeks ago he got to call an inning of a Mets game in the broadcast booth with SNY’s Keith Hernandez, Gary Cohen and Ron Darling.
Courtesy Jennifer Kraus 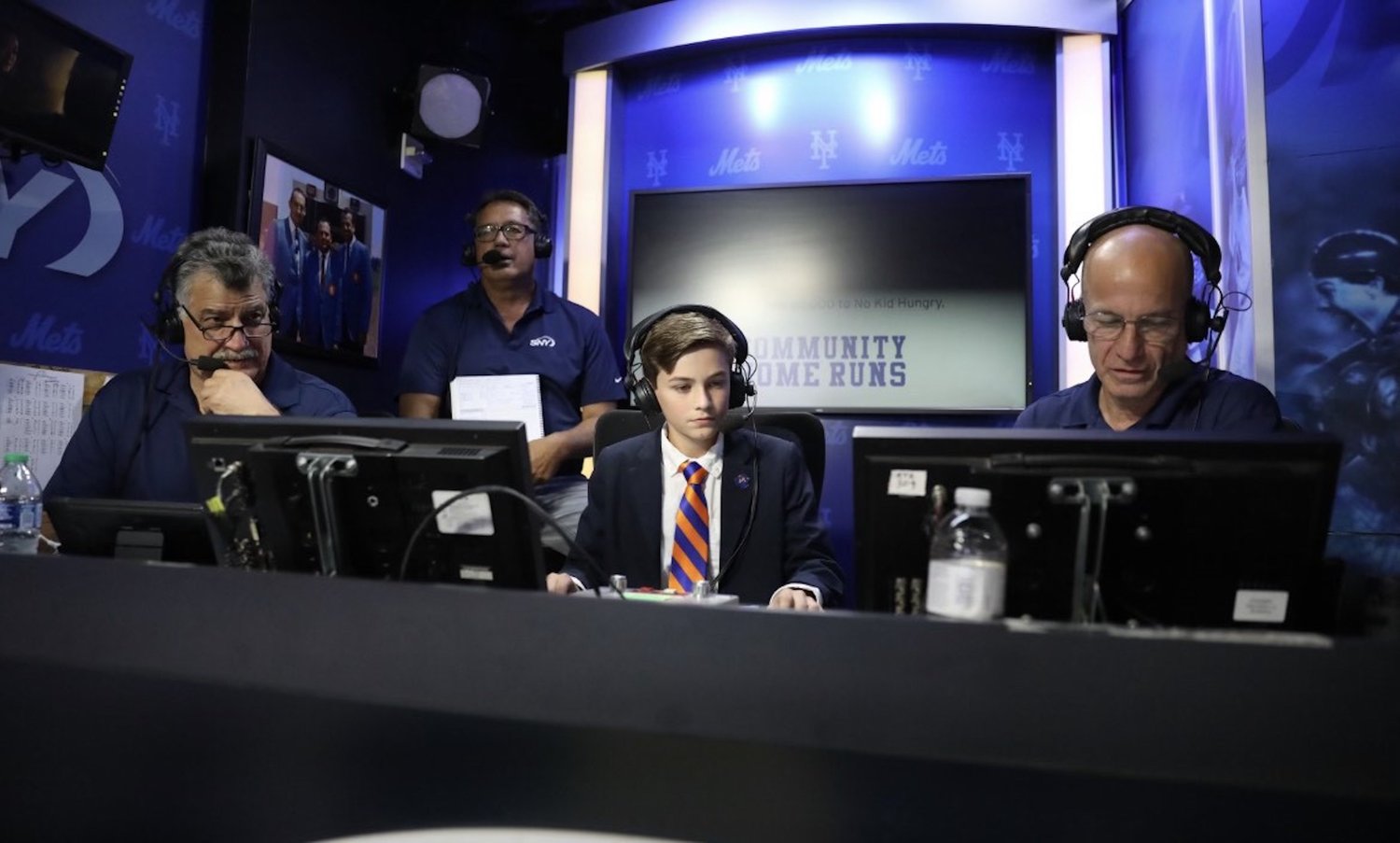 The 12-year-old North Bellmore resident is passionate about sports broadcasting — and the New York Mets. On Aug. 25, he was SportsNet New York’s 2022 Kidcaster. During the bottom of the second inning of the Mets’ game against the Colorado Rockies, Eddie was a special guest in the SNY booth, where he called the game with broadcasters Keith Hernandez, Gary Cohen and Ron Darling.

His love for sports and calling play-by-play started when he was 5, he said. He grew up watching the Mets and New York Islanders play, and, admiring the teams’ broadcasters, was sold on becoming one himself. He started a YouTube channel, simply called Eddie Kraus, where he does game recaps every time the Mets win.

A 2022 graduate of Saw Mill Road Elementary School in the North Bellmore School District, Eddie said that this year, he was finally able to attend a broadcast journalism summer camp at Hofstra University. There he had the opportunity to work with commentators for the college’s basketball team, and meet Kevin Dexter, a sportscaster for News12, and Paul Severino, of MLB Network.

“You get to meet so many people there,” Eddie said. “It’s really cool.”

In early July, Eddie was scrolling through Twitter when he saw an ad for SNY’s Kidcaster program. For over a decade, SNY has given young broadcasters the opportunity to audition for a chance to sit in the broadcast booth for half an inning and call the game alongside the pros.

According to SNY’s Facebook page, kids between the ages of 8 and 12 who live in New York, New Jersey, Connecticut or Pennsylvania can apply, with their parents’ help, and send in an audition clip. The link for auditions usually opens sometime in late June.

“I ended up getting a text from a friend that knew I was interested in broadcasting,” Eddie said. “He said, ‘You need to do this.’ It was that nudge for me to do it.”

He submitted a clip of himself calling a walk-off home run by Mets first baseman Pete Alonzo against the St. Louis Cardinals in a game in May. His audition was well received, and he scored an interview with SNY producers. Early last month, he was told he’d won the spot.

“I was at the airport, on a plane going to Disney,” when he found out, Eddie said. “It took a bit to keep myself together.”

Two weeks ago, in the home half of the second inning of the Mets-Rockies game — a 3-1 Mets win — Eddie got his time to shine. Hernandez, he said, told him to take it all in.

The SNY’s sportscasters let Eddie take the lead. “They said, ‘Take it away — do your thing, man,’” he said.

While calling a home run by a Mets player would’ve been ideal, he didn’t get the chance. “Calling a home run would’ve been the coolest thing in my childhood,” he said. “They came close, but it didn’t happen, unfortunately. But it was just so cool, though — it’s what Keith, Ron and Gary get to do every night, and they didn’t change anything around for me. It was the same exact setup.”

Eddie’s mom, Jennifer Kraus, said he was still “on a high” last week from the experience. He started seventh grade at Grand Avenue Middle School in Bellmore on Sept. 1, and said he couldn’t wait to get involved in programs offered in the Bellmore-Merrick Central High School District. At Grand, he said, he was looking forward to joining radio and journalism clubs.

Two years from now, he’ll be a student at Wellington C. Mepham High School. “I know Bellmore-Merrick Broadcasting is a really good broadcasting program,” he said. “I’m ready to hop into high school in two years.”

As an Islanders season ticket holder, Eddie said he was also able to visit the broadcast booth at the UBS Arena in December. He didn’t call any of the action on the ice, but said it was still a great experience.

And not only is Eddie a baseball fan, but he also plays the game, in the North Bellmore-North Merrick Little League.

Always working to perfect his craft, Eddie practices by muting recordings of old Mets games and calling the play-by-play. For all that he’s gotten to experience this year, he said he’s extremely thankful.

“I am so grateful I got to be this year’s Kidcaster,” he said. “It was just crazy.”

And for young people like him, he offered some advice. “To any kids that want to pursue a career — just go for it,” he said. “What’s the worst thing that can happen? Just go for you dreams.”