Are guns too close to America's heart to discuss? 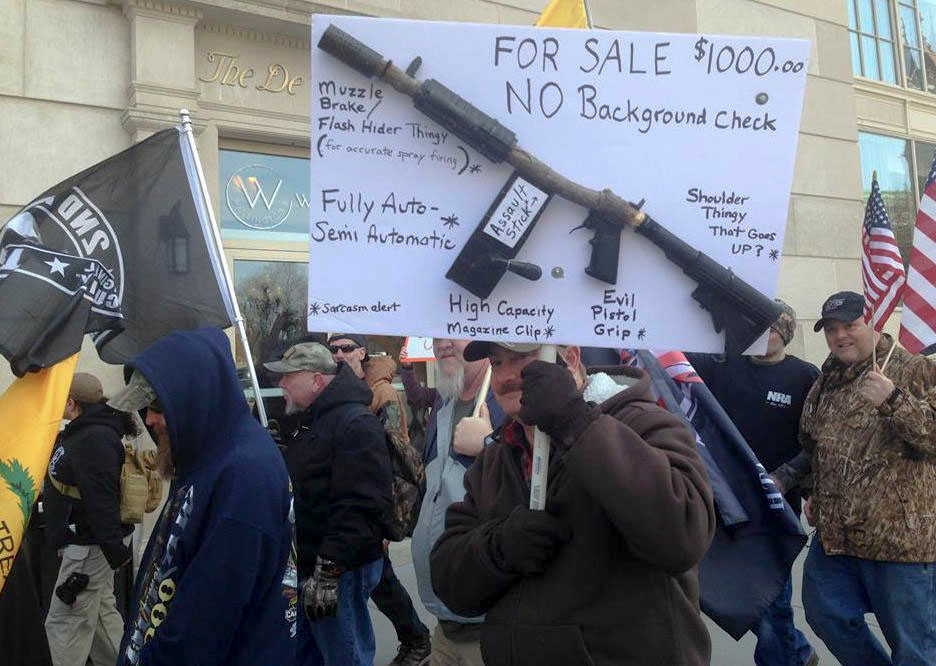 Guns are linked to many Americans’ sense of identity and freedom. At this pro-gun rally in Albany last month, demonstrators held signs that mocked gun control advocates’ perceived lack of understanding about firearms.
Scott Brinton/Herald 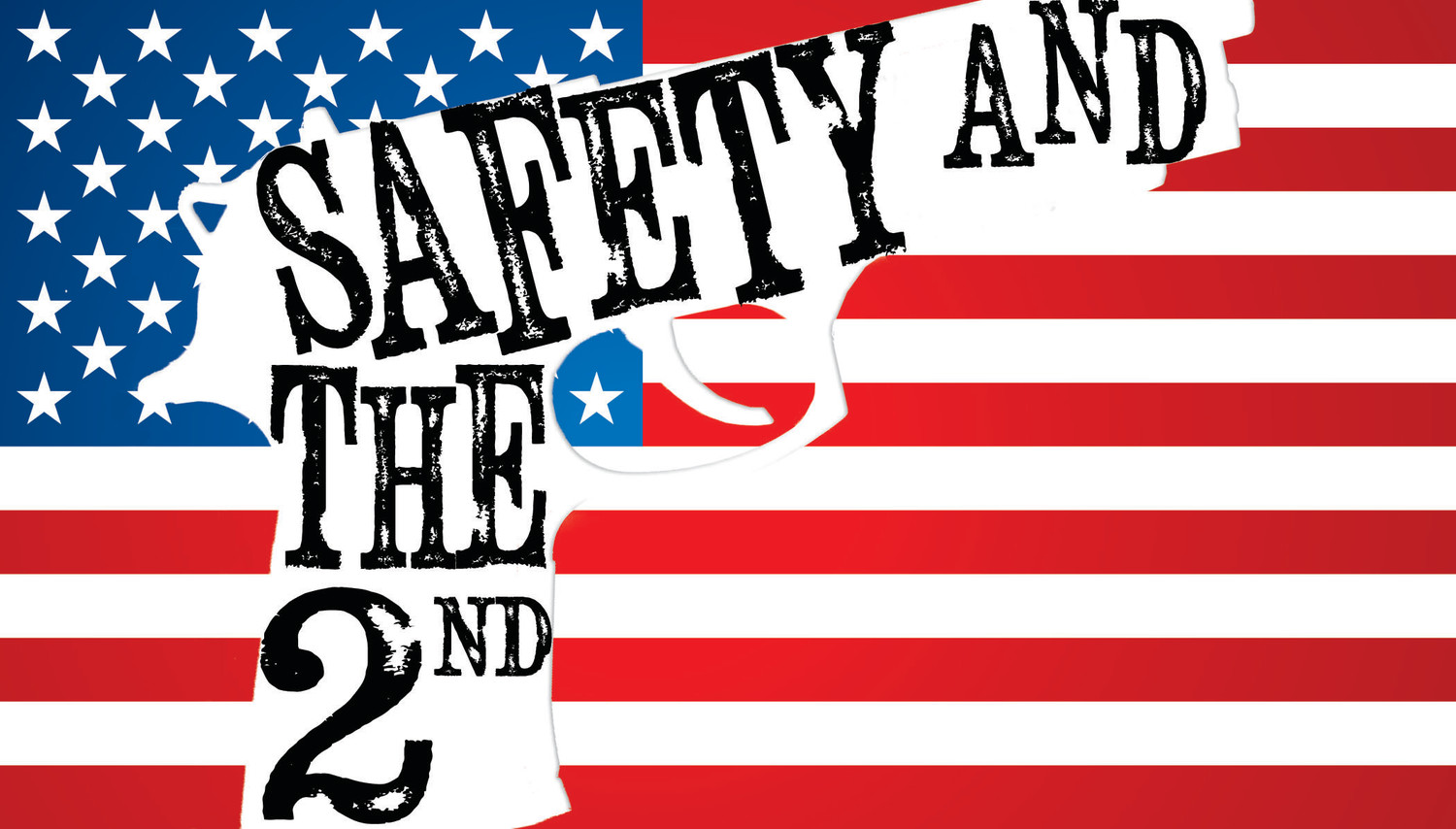 Gun manufacturers have benefited from the branding that action-movie firearms provide. According to the Economist, Smith & Wesson’s .44 Magnum, for example, received a sales bump after Clint Eastwood’s character Dirty Harry gave a nod to the gunmaker. “Die Hard 2” also boosted Glock sales.

“According to Mother Jones, Glock started to give free or steeply discounted guns to Hollywood prop houses in search of ‘its Dirty Harry moment,’” in the words of reporter Paul Barrett, whose book, “Glock: The Rise of America’s Gun,” documents firearm manufacturers’ growth.

Part three in a series.
For many Americans, firearms are linked to the national concepts of self-reliance and individualism — after all, it was with guns that we shook off the yoke of British rule. Even with popular attitudes toward gun control changing, the place that guns hold in the country’s imagination still makes a serious public conversation about how to legislate them difficult, experts say.
Adam Winkler, a professor of American constitutional law and history at the University of California, says that despite strong emotions favoring more regulation, deeply ingrained feelings about the firearm as a quintessentially American right can be even stronger. “When you’re trying to regulate guns, you’re not just trying to regulate a tool,” Winkler said in an interview last week. “You’re also regulating people’s identity. You’re influencing and touching on people’s deeply held values.”
A Pew Research Center poll conducted in March and April 2017 found that 74 percent of gun owners polled said that the right to own guns was “essential to their own sense of freedom.”
Winkler noted that the founders weren’t necessarily thinking about personal self-defense when they wrote the Second Amendment. They were concerned for the maintenance of local militias to defend the nation. He added that the guns of the time would not have been particularly useful in defending oneself against an intruder because of their unwieldiness.


“You couldn’t store a gun loaded … You could only load one round at a time. It was not primarily a self-defense weapon,” he said.
Still, owning guns is a well-established right, with most states guaranteeing it in their constitutions. But a national tendency toward fear and a collective mythology that continues in popular entertainment can “add to the difficulty” of having productive conversations about the best way to legislate guns, Winkler said.

Fear of Crime
Violent crime in America has been steadily declining since the early 1990s, according to Pew. It was down 48 percent between 1993 and 2016, according to the Federal Bureau of Investigation.
Still, 67 percent of American gun owners said that self-defense is a major reason for owning a gun. And 60 percent of Americans surveyed over 17 years by Pew said they believed that crime was up from the year before, despite contradicting data.
Even with crime at historic lows, “the news tends to emphasize the dangers of crime and bad incidents,” Winkler said, adding that it’s possible that since 9/11, Americans could be more on edge and “prone to exaggerate the threats we have.”
“The gun makers and National Rifle Association constantly warn that danger is lurking right around the corner, and you need to defend yourself,” Winkler said. “It’s amazing … There’s still a sense Americans have that they’re in grave danger.”
Kara Alaimo, an assistant professor of journalism, media studies and public relations at Hofstra University, agreed.
“I think there are many narratives in the media and entertainment that do serve the NRA’s interest by promoting a culture of gun ownership in America at a time when it’s not necessary for our national security,” Alaimo said.

Gun mythology
The American idea of the “Wild West” is where the nation’s fascination with the gun begins. Even our understanding of that history, however, said Winkler, is far from the reality.
“We imagine the Wild West as being filled with guns and shootouts at noon every day,” he said. “The truth couldn’t be more different.”
Frontier towns, according to Winkler, had stricter gun controls in place than many American towns today. While gun ownership was nearly ubiquitous, carrying in towns was restricted, and a Wild West town on the frontier would average less than one murder per year.
“We’ve been sold an image of the Wild West that’s far from the reality,” he said. “It’s been designed for the commercial and cultural interests of Americans.”
Further, many Americans’ idea of firearms — how they work and the damage they can cause — is similarly distorted. Winkler said that America’s fetishization of firearms isn’t necessarily unique — American action films play around the world, and Asian cinema is full of gun-heavy melodramas — but its impact on the national conversation is.
“They’re more like toys in the way they’re portrayed,” he said. “You can fire them on end without having to reload. Our imagery is very distorted.”
When gun violence is killing women and children, Alaimo said, “I think that entertainment companies have a real responsibility to look at how they portray these issues.”

New advocates
Still, the prevalence of young voices speaking out in the aftermath of the Marjory Stoneman Douglas High School shooting in Parkland, Fla., may bode well for a change in public attitudes, and eventual legislative action, Alaimo said.
“First of all, kids tend to speak really bluntly,” she said. “And I think that we need people who will challenge politicians and talk about this issue in starker ways. It’s powerful to hear from a child who’s been a victim of gun violence.”
Larry Levy, executive dean at Hofstra’s National Center for Suburban Studies, agreed that the Parkland students, and thousands of high-schoolers nationwide who have joined them in recent protests, are particularly effective spokespeople.
“So many kids were killed in a community that most white middle, upper-class people — the majority of suburban voters — can identify with,” he said.
Seeing the survivors of a school shooting speak out resonates with people: “Cognitive research teaches us that people don’t respond emotionally to statistics; they respond to stories,” Alaimo explained.
The younger voices — who Alaimo said have now “been given a playbook” by Parkland students for the next school shooting — will face entrenched attitudes, even in trying to engage a national conversation.
Winkler said that many law-abiding Americans who would never be prevented from owning a gun, even in the face of expanded background checks, likely will not budge on the issue because of deep-rooted beliefs.
“People are very reluctant to support what we might think of as truly common-sense gun control measures because they feel it’s an attack on their identity and their liberty,” he said. “It’s a very powerful emotion.”

Tyler Marko contributed to this story.
Report an inappropriate comment