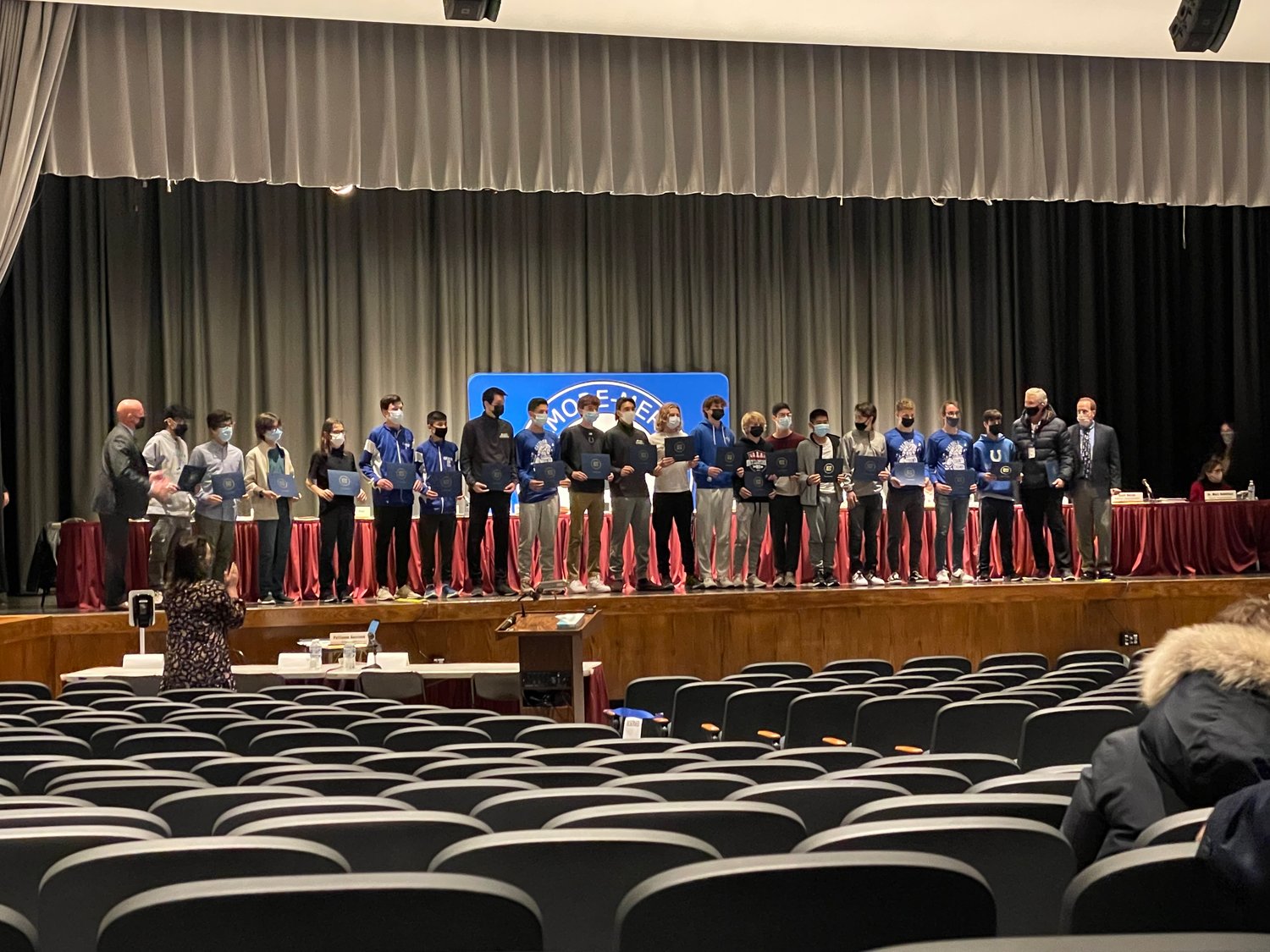 At the Bellmore-Merrick Central High School District meeting on Dec. 1, the Calhoun High School boy’s cross-country team was honored, having won both the county championship and state qualifier meets.
Jordan Vallone/Herald
Previous Next
By Jordan Vallone

It was a busy night for the Bellmore-Merrick Central High School District as the Board of Education held their last meeting before the New Year on Dec. 1 at the Brookside School in Merrick.

At the beginning of the meeting, a handful of students were honored due to recent athletic accomplishments, including the Stanford H. Calhoun High School boy’s cross-country team who won both the county championship and state qualifier meets. Sofia LaSpina, of Wellington C. Mepham High School, who was the first female football player on Long Island to score a touchdown, was also honored.

“This has been an incredible month,” Superintendent Mike Harrington said. “Our fall athletic season was fantastic. We had so many of our teams in the playoffs this year. When we look back — that’s what we wanted. We wanted this school year to be filled with experiences that students didn’t have last year.

Certain events were also discussed, such as the Bellmore Lions Club’s annual children’s holiday party, “The Polar Express,” which took place on Dec. 4 at the Brookside School.

“This is not just a toy drive,” Harrington said. “We have an auditorium full of toys that are going to go to these children in need. It is the treats and the food trucks and the meals and the candy and the characters that are here, and the way these children’s eyes light up when they come to Brookside — it reminds us all of what the holiday should be.”

Also honored at the meeting was Lisa Federici, a Mepham art teacher who was named the “New York State Art Teacher of the Year” in November. Harrington and the board thanked her for her dedication to the district and her students, and presented her with a special certificate on stage.

At every meeting, the Board of Education invites student representatives from each high school to give a short recap of their school’s monthly accomplishments, and present any concerns they may have as students.

The four representatives are Julie Moehringer of Calhoun High School, Amanda Montalbano of the Meadowbook Alternative Program, Nicole Rosen of John F. Kennedy High School and Anthony Scotto of Mepham High School. Each was egaer to discuss the dedication of Bellmore-Merrick students who participated in various drives in preparation for the holiday season. Other accomplishments such as athletic achievements, and upcoming events were also shared.

Another presentation point of the evening was on the “Senior Experience” — a class that senior high school students can enroll in to learn a humanities based curriculum, while also completing an internship and gaining real-world experience. Co-taught by an English and social studies teacher for two periods, three times a week, the presentation included program highlights and reflection statements from previous students.

Lastly, parents were invited to make public comments if they had submitted their name earlier in the evening. A number of concerns were brought up, but one of the more pressing issues was about school safety amid the recent school shooting in Oxford, Michigan, that left four students dead and several others injured.

Though the board or superintendent is not always able to address concerns immediately, Harrington quickly assured parents that Bellmore-Merrick schools were not only safe, but that they had enhanced their safety protocols following the 2018 school shooting in Parkland, Florida.

Harrington explained that his predecessor, John DeTommasso, who retired at the end of the 2021 school year, made sure that the schools were fully staffed with secuity guards who had law enforcement backgrounds. He added that the safety of students and staff is a priority, and that the district also prioritizes the mental health of students.

“This is something we can’t do enough of,” Harrington said of school safety enhancements.

Lastly, the board listened to concerns from parents over mask and potential vaccine-mandates. Parents were asking the board to be “proactive with parents” who might be opposed to vaccinating their child. While the board did not immediately respond to this issue, they thanked everyone for voicing their opinions and concerns.