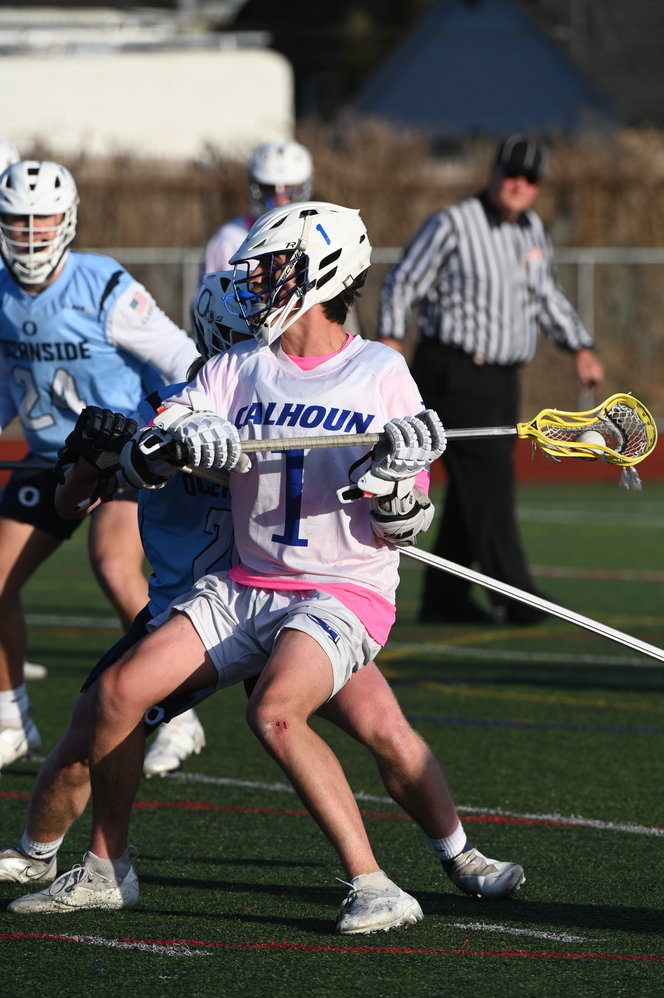 The last time the Calhoun boys’ lacrosse team played in a county final, coach Jim Femminella was about six years old and living in Bethpage.

Alex Vieni scored the tying goal with 6.3 seconds left in regulation and A.J. Molinari notched the winner with just over four minutes gone in overtime as the third-seeded Colts advanced to their first county title game since 1987 with a thrilling 10-9 win over No. 2 MacArthur in a Nassau B semifinal at Hofstra last Friday.

“It’s something we’ve know about,” Femminella said of the drought. “We know we’ve never won a county championship, but we knew we had a special group of young men that have put a lot of time in all offseason long and have done the extras during the season and that it was a possibility.”

Calhoun, whose lone loss in its last 10 regular-season games was an 11-8 setback at MacArthur on May 11, took an 8-7 lead with 9:20 left on Thomann’s eighth goal of the season. But the Generals responded with goals 2:45 apart by Rocco Hogan and James Hegel to regain the lead with 4:15 remaining.

The Colts couldn’t get the equalizer in the final minutes and called timeout with 19.8 seconds left to give themselves one last chance.

On the ensuing play, Vieni took a behind-the-net pass from Lewis at the low right-wing side and carried the ball to the midway point of the MacArthur zone, where he stopped and deked a General defender before rocketing a long low shot into the net for his third goal of the contest and 40th of the spring.

“Jonathan Lewis set a fantastic pick, and that got Alex with the short stick,” Femminella said. “At that point, we teach the kids take two steps back and establish that you have a one-on-one and attack it.”

MacArthur had chances to win in overtime, but Joey Forchelli’s shot from the right crease sailed just outside the left post moments before Restivo got his left leg in front of Hegel’s attempt from down low.

Calhoun long pole Xander Megias gathered the rebound and fed Lewis in General territory. Jayden Finkelstein collected Lewis’ pass further down the left side and found a cutting Molinari, who deked high before depositing his second goal of the game into the lower left part of the goal for the clincher.

“Jayden could’ve shot the ball, but unselfishly he saw that A.J. had a better shot and nobody was going to be on him,” Femminella said. “He makes the pass and A.J. scores a goal that he’s scored seven or eight times this year.”

The game was tied at 2 after the first quarter and Calhoun went up 4-2 with just under eight minutes gone in the second. MacArthur quickly tied it late in the half when Hegel and Forchelli scored just under three minutes apart. The teams split six goals in the third.

Calhoun advanced to the semifinals by defeating Carey 11-6 on May 23.