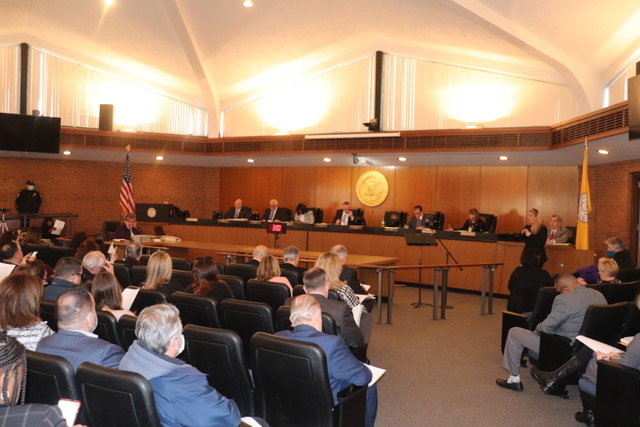 Residents and North Bellmore School District representatives attended the Town Board meeting last week to hear from developers and to share their concerns.
Maria Cestero/Herald

A developer’s proposal to raze the former Temple Beth-El synagogue and replace it with a high-end aparment complex were debated at the Feb. 15 Town of Hempstead board meeting. If approved, a structure similar to the one above would replace the unused synagogue.
Courtesy Melanie Pagano
Previous Next

I’m concerned that the conversations did occur without the input of the school district.”
Marie Testa, Superintendent, North Bellmore School District
By Maria Cestero

North Bellmore residents are voicing their concerns about the possible demolition of the former Temple Beth-El synagogue and its replacement with a 28-unit apartment complex. The three-story synagogue, on Bellmore Road, merged last year with the East Meadow Jewish Center, and is currently unoccupied. A rezoning proposal, if approved by the Town of Hempstead Town Board, would allow the repurposing of the property.

Construction of the apartments would take approximately a year. The proposal was discussed at the Feb. 15 Town of Hempstead Town Board meeting.

The proposal to rezone the property came from the building firm SDL Bellmore LLC, and was presented by its representative, Daniel Baker. According to the presentation, the new building would be only slightly taller than the synagogue.

“Something has to happen with the property,” Baker said. “The temple isn’t going to use it. The reality is that we believe this proposal is the best fit for this property and the community.”

The building he said, would not only provide high-end homes for new residents, but also be an aesthetically pleasing addition to the community.

Board members expressed their concerns about the height of the proposed building, because, they said, it could jeopardize the privacy of its neighbors. And residents said they were worried about the potential increase in traffic created by new residents on the two-lane Bellmore Road.

The firm noted that the 60-student day care facility at the temple accounted for 245 vehicles per day, whereas the apartment building would see only 189 vehicles per day. The statistics were based on data gathered by the state Department of Transportation before the coronavirus pandemic.

The majority of residents who spoke at the meeting said they opposed the builder’s proposal. “I am not for this project — I just think it’s too big for the area,” said Corrie Quaranto, of Bellmore. “I could be stuck on Bellmore Road for a long time. Twenty-eight units [and] three stories is a lot, and I beg you to reconsider.”

Quaranto also said she worried about enrollment capacity at nearby schools. She and others said they wondered how many new students the apartments could bring to the area’s school districts.

North Bellmore Schools Superintendent Marie Testa agreed with Quaranto. An expert on enrollment trends in the district, Testa was adamant that it could not accommodate a large influx of students. The district recently had to rezone its district’s boundaries in order to take in the rising number of students in the area.

“I’m concerned that the conversations did occur without the input of the school district,” Testa said of the rezoning plans. “We are at capacity at all five schools. We cannot take that at this time.”

In a statement to the Herald, North Bellmore resident Nicole Cassara-Tuffarelli expressed additional concerns. “[The developers] gave no advanced notice to our school district’s superintendent, local civic association or media outlets, so we had no opportunity to have a community meeting prior to the hearing,” Cassara-Tuffarelli wrote. “Huge [building] monstrosities should be reserved for commercial areas with proper roadways to support them.”

Town council members voted to review and reserve the decision, for further consideration at a future meeting.