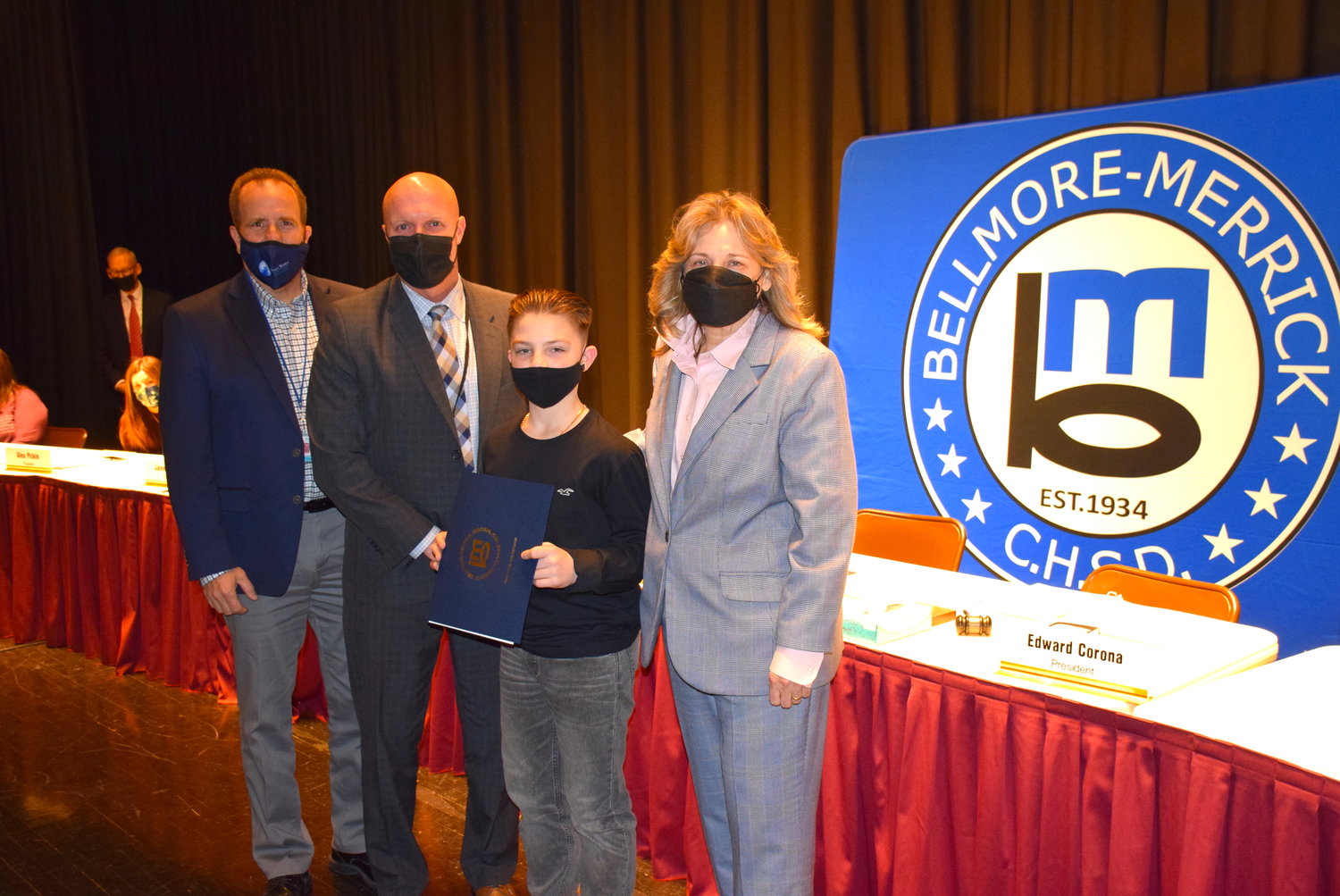 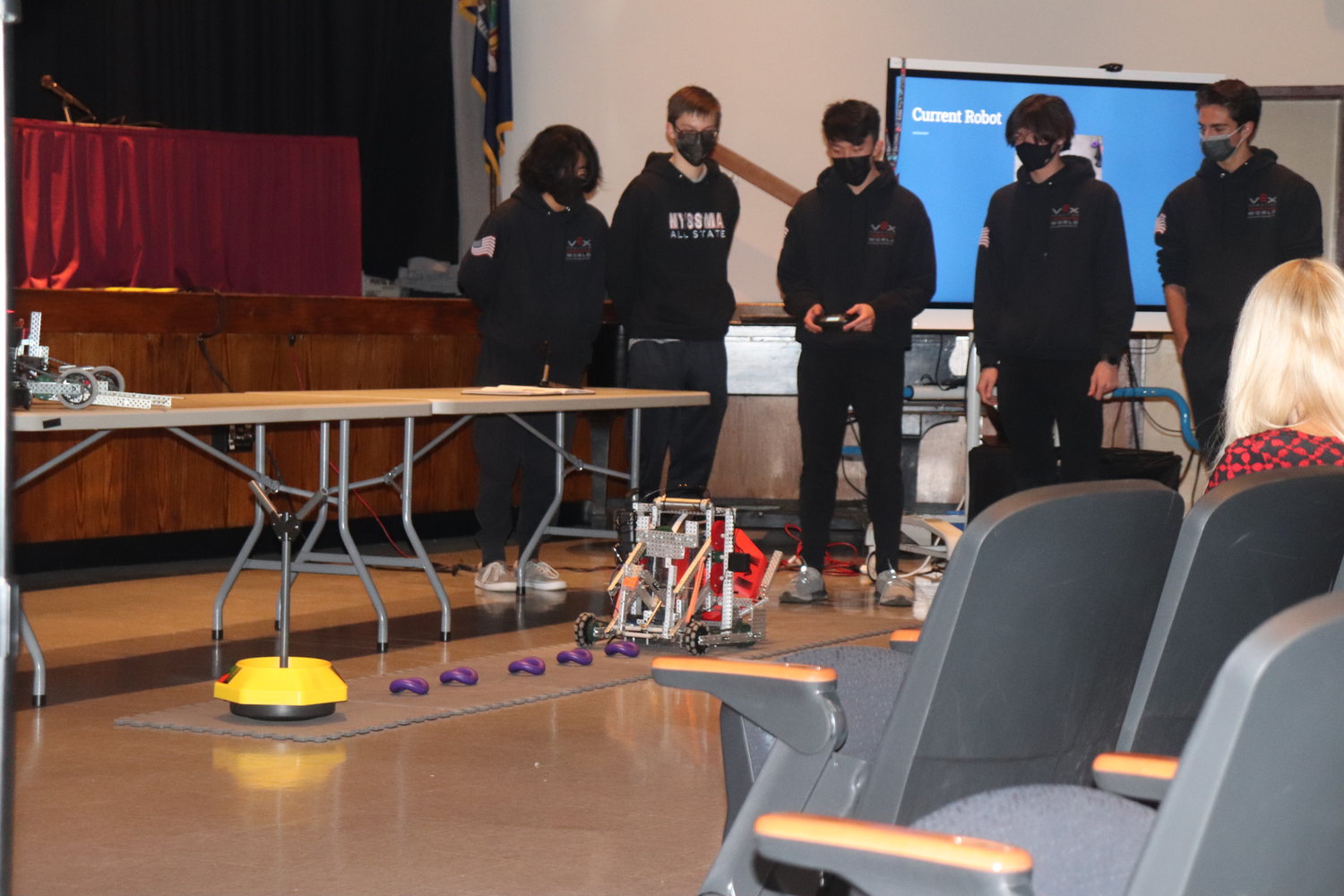 During the meeting, the VEX high school robotics team demonstrated their robot that picks up “ringles,” or rings that look like Pringles.
Maria Cestero/Herald
Previous Next
By Maria Cestero

A small crowd gathered outside the Brookside School in Merrick on Jan. 12, eager to enter the first Bellmore-Merrick Central High School District Board of Education meeting of the new year.

Community members and families who attended the event came out to discuss the recent executive order made by Nassau County Executive Bruce Blakeman regarding the school district’s mask mandate.

Though the weather was cold, some guests heatedly argued with security before entering for the meeting. Attendees argued about the enforcement of mask mandates inside the location as security handed out masks.

As the board members began taking their seats on stage, one woman screamed, “Take the masks off!”

Prior to the meetings’ start, board members asked for a moment of silence for the recent fire in a Bronx apartment building, which killed 17 people, including eight children.

Starting off the evening’s agenda, the BOE members presented a certificate to eighth-grader Luke Fischetti, honoring his volunteerism during the Bellmore Lions Club Polar Express Event in which children received gifts and other surprises.

Later in the evening, the VEX high school robotics team demonstrated their robot that picks up “ringles,” or rings that look like Pringles. This project will be entered in a robotics competition at the end of the month. According to the team, this year’s entry is one of their most complex robots and they plan to add more designs to the “ringle” collector.

The board then passed a series of motions, all uncontested, and opened the floor for public comment. Each having three minutes to voice their concerns, parents and residents of Bellmore-Merrick discussed the mask mandate in the central district.

“At some point weeks, months, or years from now the adults in this room and those on the stage will look back at these past few years and realize the kind of emotional, mental, academic and psychological damage inflicted on our children at the hands of arbitrary, illogical and clearly ineffective government overreach,” a father of three children attending different schools in the district said to the board. “Overreach and sadistic efforts that are conditioning our children to be subservient, antisocial, and germaphobic.”

The parent continued to address the board on account of the mask mandate and insinuated the board would rather “learn the hard way, rather than be self-reflective and humble enough to learn from history.”

Although masks do not provide total protection against Covid-19, surgical masks are better than nothing and research conducted throughout the pandemic confirms this. A study published in the American Society for Microbiology Journals in October 2020, determined surgical masks reduce the amount of Covid-19 inhaled by the mask-wearer by about 50%.

The parents asked the board for their answer and shamed them for “following orders.” The board members responded they will discuss the matter at a later time as the public comments are not back-and-forth discussions. This was met by remarks from the audience, who claimed that the board will not answer parents.

Security roamed the auditorium throughout the meeting, asking guests to wear their masks properly, and the board members asked the audience to be considerate during the public comment session.

Ending the board meeting, board members addressed their inability to answer their questions immediately or to override the state’s policies on Covid precautions. Superintendent Mike Harrington of the Bellmore-Merrick Central High School District previously told the Herald the district was unsure of the legality of Blakeman’s executive order.

The next regular BOE meeting is scheduled for Feb. 2 at the Brookside School in Merrick.