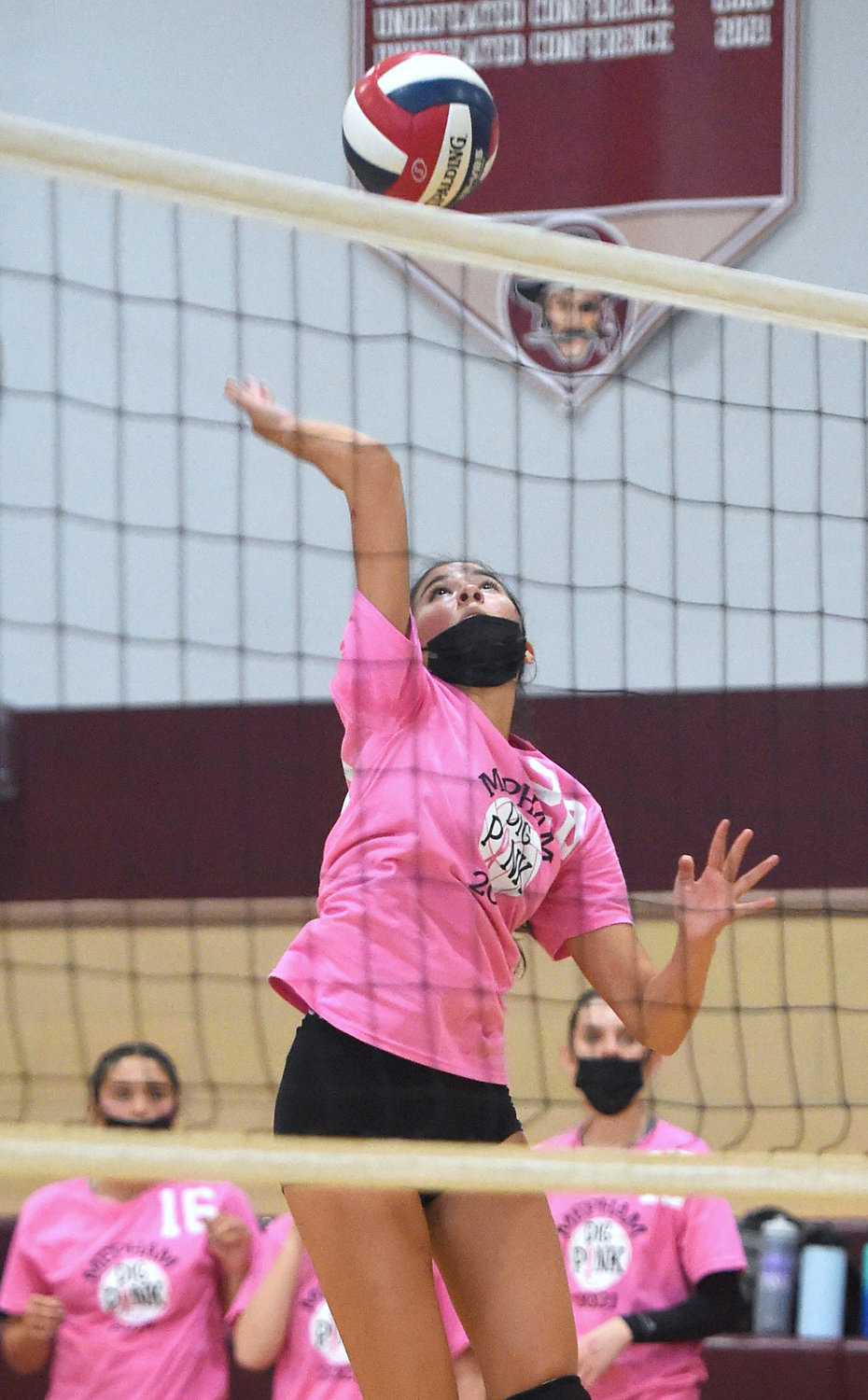 Freshman outside hitter Samantha Raikos has made an immediate impact for the Pirates, who won eight straight matches between losses to Valley Stream North.
Donovan Berthoud/Herald
By Garrett D. Uribe

Two-time defending conference champion Mepham may have to let another girls’ volleyball team get a turn atop the final league standings.
But second-year Pirates coach Tom Wildeman said that such a team might want to enjoy the moment, as Mepham – No. 2 in Conference A/C3 behind first-place nemesis Valley Stream North – may yet have the final word should the rivals rendezvous in the playoffs.
In two matches a month apart – Sept. 13 and Oct. 13 – the Pirates (8-2) ran up against the firewall that is VSN (9-1 A/C3), losing 3-0 and 3-1, respectively, to the supercharged Spartans. Between those bookend blemishes Mepham mowed through everything in its path – winning 24 out of 27 sets in compiling eight straight victories.
“I’ll give (VSN) credit; they’re solid,” said Wildeman, whose team at Herald press time had three regular-season games remaining. “Our matches were pretty tight, though. I think we can contend with them in the postseason. Our chemistry keeps getting better. Our play keeps improving.”
Not much improvement is needed in the play of Pirates middle hitter Lauren Borquin. The Honorable Mention All-County captain is third in Nassau with 51 blocks, while fellow senior Alanna Morse – Newsday’s reigning Nassau Player of the Year in softball – has adapted her All-County hot corner skills to post 21 blocks (fourth in A/C3) for Mepham.


“Lauren’s our team leader,” Wildeman said. “The girls look up to her and revolve around her. Alanna’s probably the best athlete on the team, maybe the whole school. She does it all, plays middle, back row, and is a good server.”
Rising to replace graduated All-County outside hitter Samantha Green, junior Emily Sullivan is fourth in A/C3 with 98 kills, while Green’s sister Sophia – a second year-starting sophomore – leads Mepham with 33 aces. “Emily has the potential to lead the county in kills,” Wildeman said of the outside hitter whose 20 kills against visiting East Rockaway Oct. 1 were a season high. “She’s a stud at outside hitter, and she has a whole year to get better. Sophia’s young but plays like a senior. Her serve gives teams a lot of trouble.”
No less troublesome for Pirates opponents is junior libero Victoria Condoulis, whose 181 digs are tops in the conference and sixth in Nassau. “Victoria covers lots of ground,” Wildeman said. “She can read where a hitter’s going to hit, and puts up incredible passes.”
Surely undervalued at the season’s outset, first-year starter Madsion Weber has had scant growing pains moving up from Mepham’s JV. The junior setter ranks second in A/C3 with 162 assists. Talented freshman outside hitter Samantha Raikos is having a huge season as well, ranking among the A/C3 leaders in kills, blocks and aces.
After early playoff exits in back-to-back seasons, Mepham hopes a third straight high-seeded berth is the charm to help it shatter the first-round ceiling. “I expect we’ll come in second in the conference,” Wildeman said. “We should get a good seed and advance in the playoffs. This year I strongly believe that.”