Molloy College will soon be a university 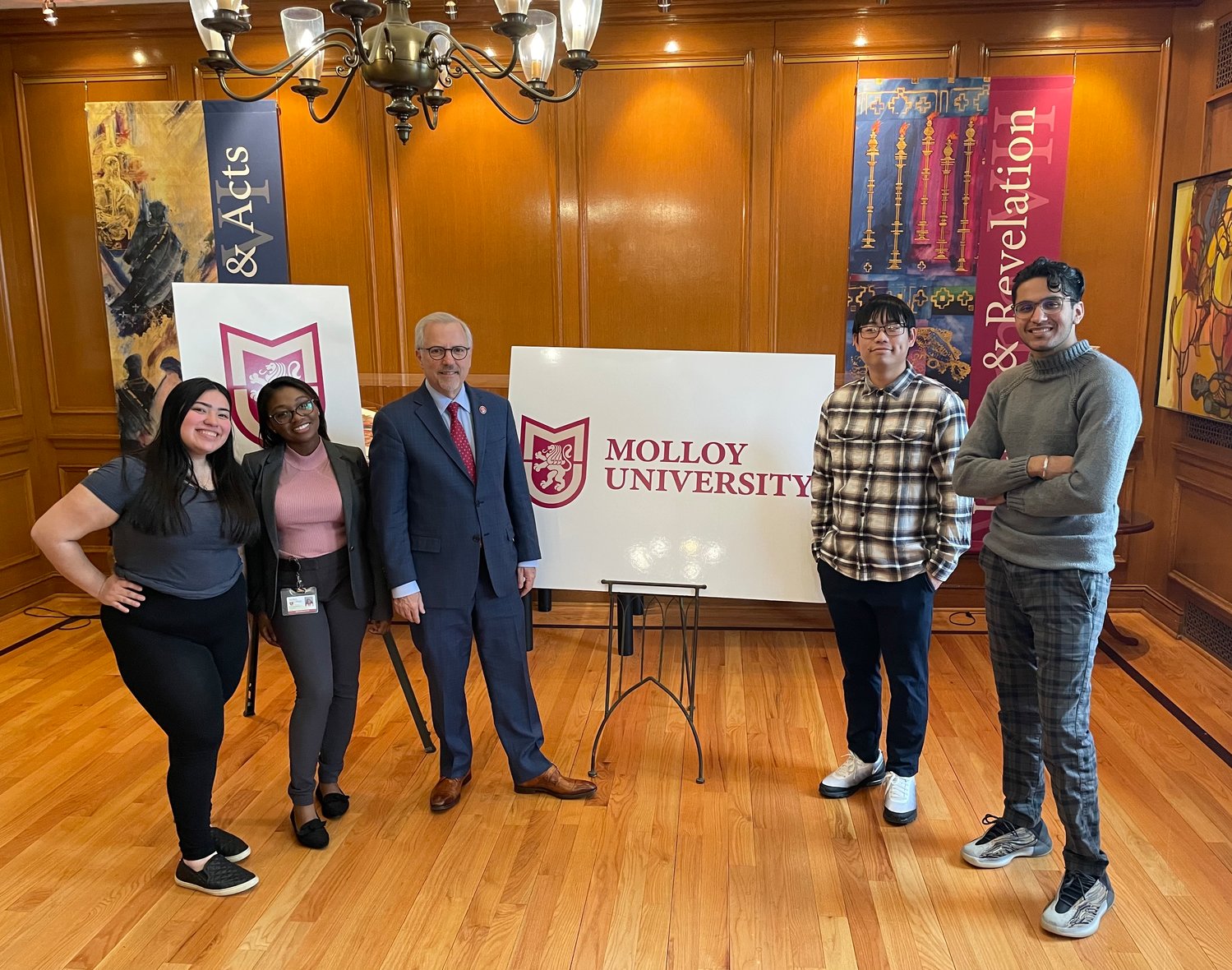 “We’ve been a college. Now I want us to think like a university.””
James Lentini, Molloy College president
By Tom Carrozza

Molloy College has officially earned university status from the New York State Board of Regents, allowing the Dominican institution to adopt the Molloy University moniker beginning June 1. It’s the culmination of work university officials have conducted for more than a decade.

Founded in 1955 by the Sisters of St. Dominic of Amityville, Molloy is known for its strong nursing program that has been especially important during the coronavirus pandemic. Molloy is a private institution with roughly 3,500 undergraduate and 1,500 graduate students.

College president James Lentini unveiled a new logo for Molloy last week, which keeps the school’s burgundy lion mascot, but is now enclosed by an off-white “M” and “U.” This is essentially full circle for Lentini, who said university status was discussed even when he interviewed for his job back in 2019.

“Some of the regents finally softened,” Lentini told the Herald. “I’m probably lucky with my timing a little bit, but I was involved in lobbying pretty hard with our regents.”

Both Lentini and predecessor Drew Bogner — who retired in June 2020 after 20 years in the position — worked with 10th Judicial District Regent Roger Tilles to change some of the language the Regents used to describe universities. New York’s definition was far stricter than the rest of the country, Lentini said.

In fact, if Molloy had been located in any other state, its four schools of nursing, business, education and the arts would have qualified Molloy for university status as early as 2018.

After retiring, Bogner moved on to become an interim president with the Commission on Independent Colleges and Universities in New York, where he lobbied the Regents even more to change its university designation. to it the rest of the country. While a huge moment for his treasured Molloy, Bogner said he was excited to also usher in more New York institutions to take on university status with the refined definition.

Molloy — through Lentini and Bogner — argued that across the country, the definition of university simply meant they had graduate programs. New York’s system, however, required a school to offer doctoral programs in order to achieve university status.

“In many ways, New York was completely out of touch,” Bogner said. The old definition hurt the competitiveness of New York schools not just with other states but internationally.

Bogner recounted a number of times prospective students would be surprised Molloy offered graduate and doctoral programs, while still being called a college.

The name might be changing, but Lentini believes Molloy’s character will remain. Right now, there are no announced plans for the school to expand its current campus, at least when it comes to existing Rockville Centre real estate.

Still, becoming Molloy University is something Jeff Greenfield — a longtime Rockville Centre resident and a 19-year member of the college’s board of trustees —believes will add value to the degrees of past, present and future students.

“It’s very gratifying to see the mission of the sisters who founded the college fulfilled,” Greenfield said, by upgrading Molloy’s status to a university.

But Molloy’s work isn’t over, Lentini said. Far from it.

The next goal for the soon-to-be university is to tailor its nursing programs to the needs of partners like Mount Sinai South Nassau in Oceanside and Catholic Health, which runs Mercy Hospital in Rockville Centre.

“If we have (programs), we’re trying to make them more robust,” Lentini said. “If we don’t have them, we’re going to be developing those.

“We’ve been a college. Now I want us to think like a university.”