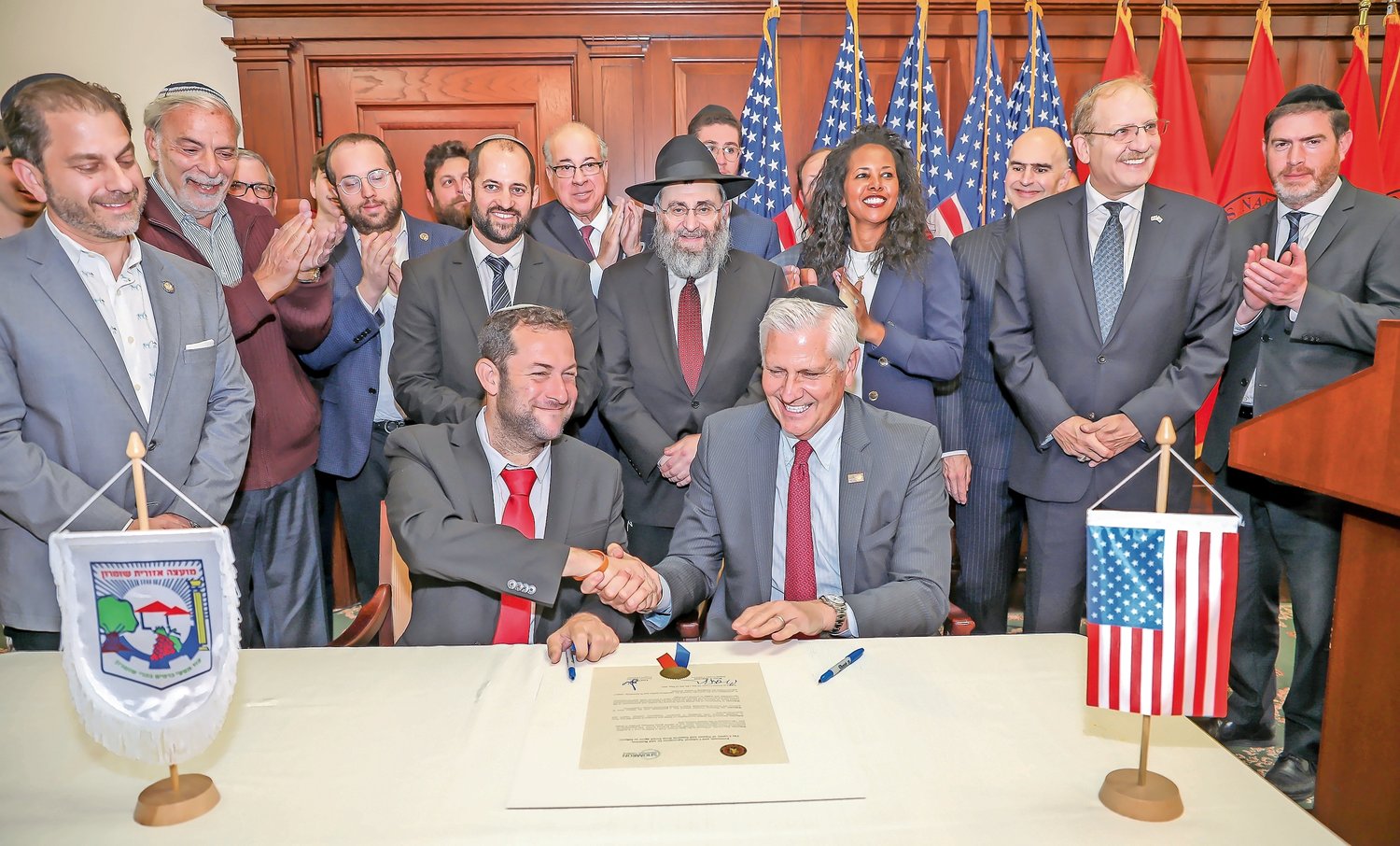 Nassau County cemented its relationship with Israel last week, signing an economic and cultural agreement with the Shomron.

It’s an area in the northern part of an Israeli territory commonly referred to as the West Bank, or Judea and Samaria.

“This is an agreement of friendship, understanding and solidarity,” Nassau County Executive Bruce Blakeman proclaimed during a ceremony in Mineola.

Blakeman’s Israeli counterpart, Shomron Regional Council chair Yossi Dagan, says his region has been the Jewish heartland since the days of the religion’s forefathers and prophets.

Mazi Melesa Pilip, a Great Neck-based legislator and a former Israeli Defense Forces paratrooper who emigrated to the Jewish state from Ethiopia during Operation Solomon in 1991, said the agreement would “continue an important and meaningful partnership and friendship based on social, economic, security and cultural” links.

“This event perfectly exemplifies the beautiful relationship between Israel and America,” Assemblyman Ari Brown said. At a time “when people are trying to put a wedge between us, the county executive brings us together.”

In fact, that’s an aspect that sometimes gets lost, said Davidi Ben Zion, deputy head of the Samaria Regional Council.
“These are not easy days in Israel because of the attacks and the terrorist campaigns,” he said. “And sometimes for you, it is not easy days. But if we move together, we can win.”

Dov Hikind, the firebrand former Assemblyman from Boro Park, applauded what he called Blakeman’s leadership in joining with Israel.

Yet, it takes more than simply saying, “I support Israel,” the onetime lawmaker said, although it’s “a good start.”
“But this is called action,” Hikind said. “This is called doing something real. You are saying to over half a million people in Judea and Samaria, ‘You are not alone. We the people of Long Island — of America — we are with you.’”

Judea and Samaria is a subject of international controversy, with some referring to it as “occupied territory,” where development by Israel violates international law. Others maintain Israel is acting legally.

Blakeman, who’s visited the Shomron, described the area as critically situated relative to the rest of the country.
“It’s the high ground overlooking the Tel Aviv airport,” he said. “To give away that strategic area would put all of Israel in danger.”

Meanwhile, Israeli development there boosts everyone.
“What you won’t hear in the media is how many Palestinian Arabs are employed in Judea and Samaria in the factories, earning three times what they would if they were in the Palestinian Authority areas,” Blakeman said, explaining that Israelis “are providing a lot of economic opportunity for their Palestinian neighbors as well as for Israelis.”

While Judea was not represented at Thursday’s event, Blakeman — whose wife is Israeli — emphasized his support for them as well. Blakeman highlighted his latest personal link to the Jewish state, introducing his daughter, Ariel, a former student at Bar-Ilan University near Tel Aviv. Just last week, he announced Ariel’s engagement to a former defense forces paratrooper.

In 2016, the Town of Hempstead proclaimed the Region of Shomron a “sister municipality.” Blakeman, a Hempstead councilman at the time, said then that “they are truly on the front lines.”