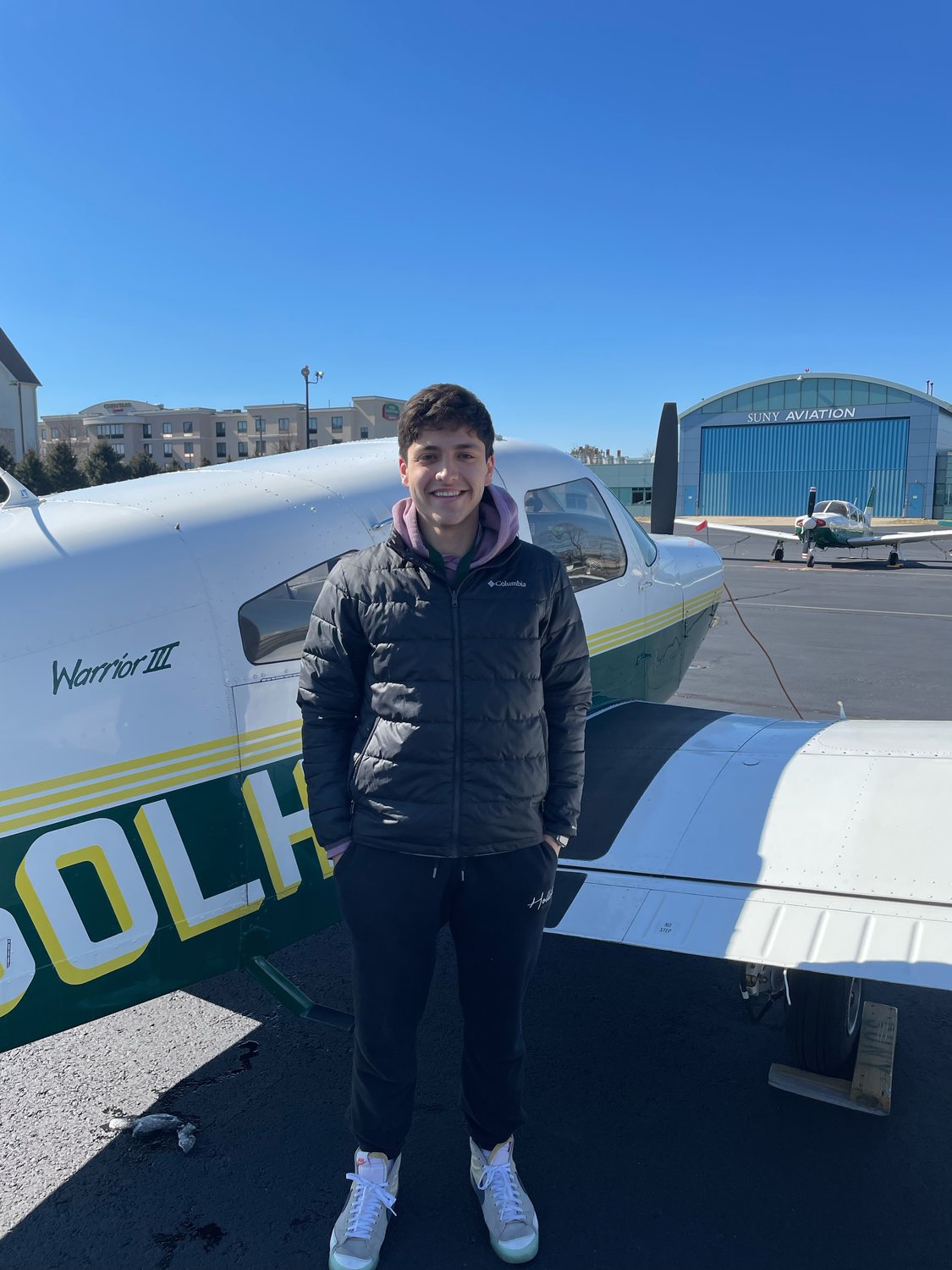 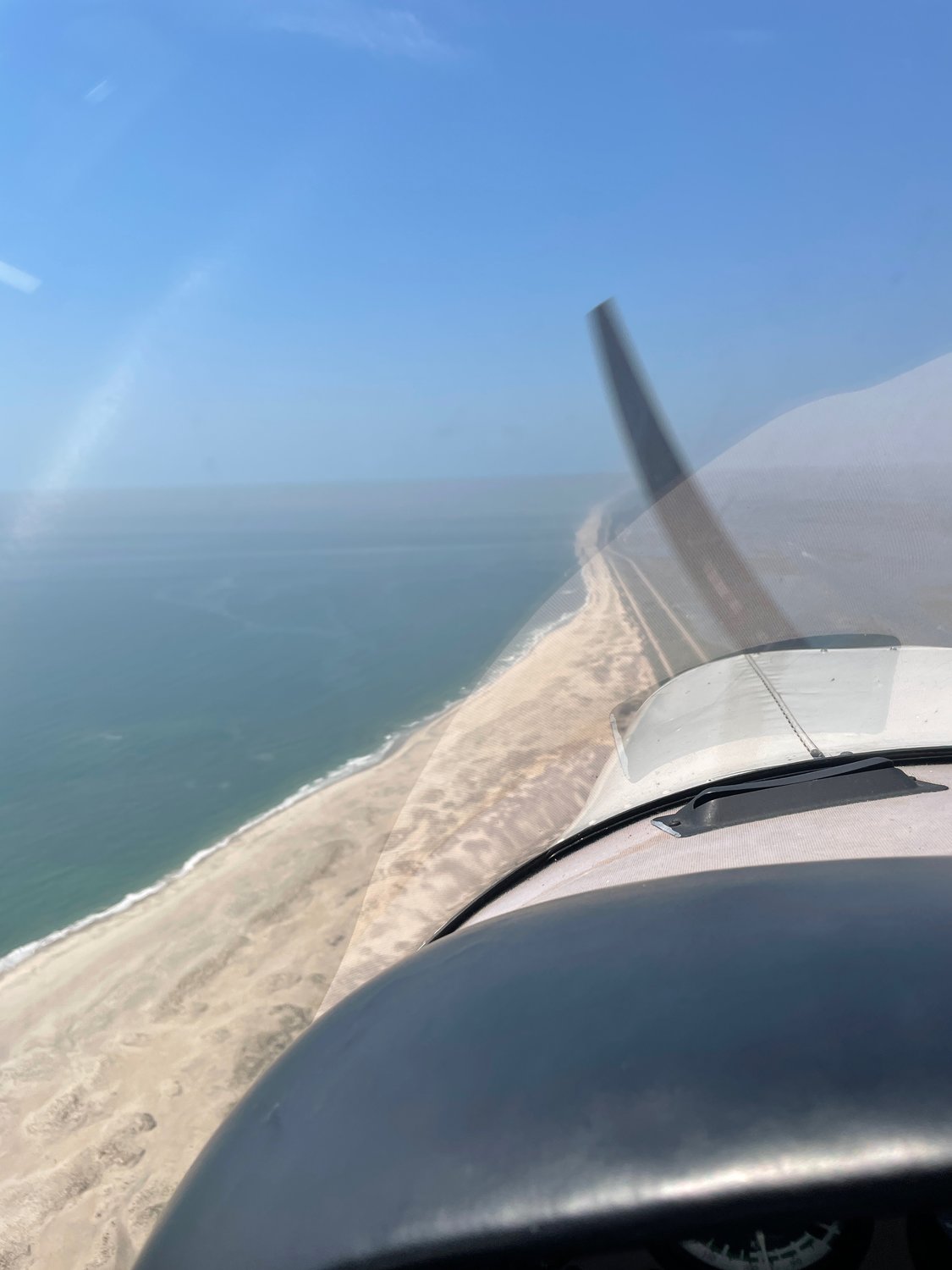 A view from above: Barsallo flies single-engine, two- or four-seat planes, typically staying within the Long Island region as he continues to learn.
Courtesy Alessandro Barsallo
Previous Next
By Jordan Vallone

Alessandro Barsallo has been flying on planes for as long as he can remember.

His mother is from Brazil, and his father is from Peru. When he was just 3 months old, Alessandro was already taking six- or 10-hour flights to visit family, and “living at the airports in the summer,” he said. Fascinated by airports and airplanes, his introduction to them at a young age is what later sparked his interest in flying — and last month he completed his first solo flight.

Barsallo, 19, of Bellmore, graduated from Wellington C. Mepham High School in 2021, and is now a student at Farmingdale State College, where he is working toward a bachelor’s degree in Professional Piloting, which is part of Farmingdale’s School of Engineering.

While at Mepham, he was also a student at Nassau BOCES Barry Tech in New Cassel, studying Aviation Operations, a course offered to high school juniors and seniors. The program prepares students to take the Federal Aviation Administration Private Pilot Written Exam, and gives them aircraft flight training.

Kathleen McCloat, Barsallo’s guidance counselor at Mepham, explained that BOCES offers several trade programs, and students with good academic standing and character are usually eligible to apply during their sophomore year. Barsallo learned of the aviation program late, at the start of his junior year, McCloat said, but because he was so enthusiastic about flying, she reached out to BOCES, and helped him get into an open seat.

“His school counselor helped us so much to get him into the BOCES program,” his mother, Patricia, wrote in an email to the Herald.

Students enrolled in trade programs spend half their school day at the BOCES school and the other half at their home school. McCloat said that when Barsallo was looking at college programs for aviation, Farmingdale was a standout choice, because it is among the best in the area and difficult to get into.

“The Farmingdale aviation program is really competitive — it’s a big deal,” McCloat said. “He took on extra math and science classes to make sure he could handle it academically.”

Those courses at Mepham included honors physics and college-level pre-calculus, McCloat added. “I can’t say enough about his character,” she said. “He’s just a great guy. I told him I’d get in a plane with him, and I don’t just say that to anyone.”

Barsallo said that Farmingdale accepts between 25 and 30 students every year, and he is one of 28 students in his class. While he said there are a few different routes people can take to complete a solo flight and eventually get a pilot’s license, at Farmingdale, the steps students take are regimented. The program involves rigorous course work — including aviation history and law, meteorology, physics and engineering, ground training — and a certain number of lessons in the sky.

After a student completes 29 two-hour- long flight lessons, a flight instructor can certify that he or she is ready for a solo flight. “Your first solo flight is really just around the airport,” Barsallo said. “It’s nothing crazy, nothing far.”

The plane that students like Barsallo fly is a single-engine two- or four-seater, with just enough room for the pilot and an instructor. Typically, he flies out of Republic Airport in Farmingdale, but when he completes a “cross-country” flight, meaning one that is over 100 miles long, he can fly into other nearby airports, such as MacArthur Airport, in Islip or Sikorsky, in Bridgeport, Connecticut. There are other airports on the island, he added, in Westhampton Beach and Shirley.

When Barsallo finishes the program at Farmingdale, he will have compiled roughly 300 hours of flight time, and then have new opportunities, such as getting a commercial pilot’s license or joining the Air National Guard, the reserve force of the U.S. Air Force. There’s a base on Long Island in Westhampton Beach, he explained, but it is hard to get into. “Hopefully, one day, I’ll get into it,” he said. “If not, I’ll definitely go corporate and fly for airlines.”

Barsallo still needs to finish certain flights, and take a “road test” before he earns his private pilot’s license, he said, but he hopes to earn it by the end of this year.

The feeling of being in the air is incredible, he said. “It is really tight — you are pretty much pushed against your instructor. But sometimes it’s like a roller coaster, when you go up and down. It really is just surreal.”