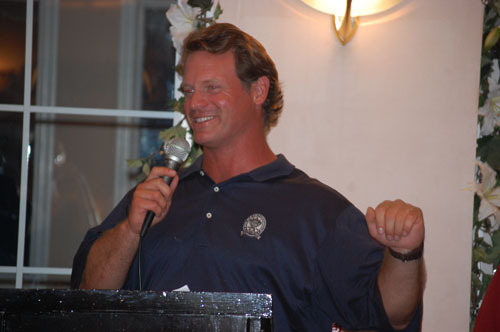 Boyd, A 1990 graduate of Central High School graduate, thanks everyone who came to share in his honor.
Andrew Hackmack/Herald 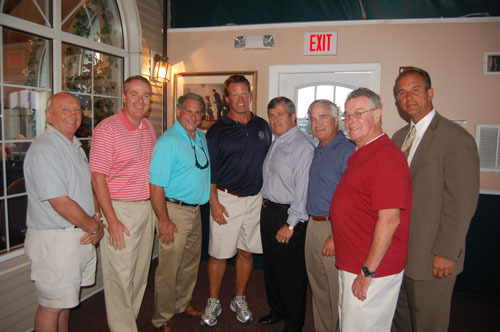 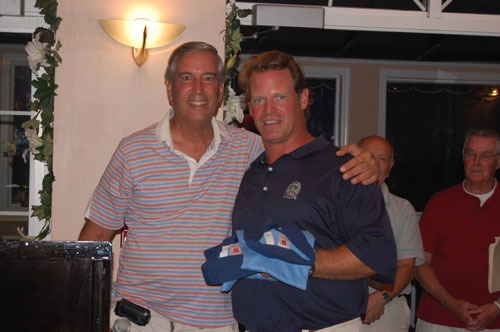 In his three years at Central High School, Stephen Boyd was a stand-out football player, and led the school to its only conference championship. But it was only the beginning for the man who would go on to become a feared linebacker in the NFL.

Last week, the Valley Stream Republican Committee honored Boyd following its annual golf outing at the Lido Beach Golf Course. John DeGrace, in his 30th year as the local Republican leader, has been hosting the golf outing for more than 15 years but this was only the second time honoring a hometown legend.

Boyd played for the local Green Hornets youth football league from 1979 to 1986, and graduated from Central High in 1990. He was captain of both the football and lacrosse teams, and made the All-State football team in 1988 and 1989.

After high school, Boyd went on to Boston College where he continued playing football. He was the team captain and most valuable player in 1994, and would later be inducted into the school’s Varsity Club Hall of Fame.

His NFL career began in 1995, and Boyd would play for the Detroit Lions for seven seasons. He was named to the Pro-Bowl team three times and the All-Madden team twice as a middle linebacker.

“He’s a great guy and we’re very proud of him,” Barra said. “This is a tribute to him and what he’s accomplished. If there were a Hall of Fame in Valley Stream, I think he’d be the first inductee.”

Boyd, who now lives in Atlantic Beach and coaches football in at Chaminade High School, has fond memories growing up in Valley Stream. He acknowledged that many people at last week’s golf outing have been longtime supporters and leaders of the youth organizations that he and others grew up with.

The Green Hornets, and other youth programs, are very important, Boyd explained. “It was a great way to start your life,” he said, reflecting on his early football days. “I was fortunate to grow up in a town with so many people who are dedicated and give back the community.”

Boyd said after retiring from football, it was his goal to coach for seven years — as long as he played in the NFL. But now that he does it, he can’t imagine giving it up. He said as he got older, he realized how important it is to give back and make a difference in the lives of children and teenagers.

Harry Schloss, the athletic director at Central when Boyd went to school there, remembers the former star as not just a standout athlete, but as someone of great character. “A tremendous, tremendous person,” Schloss said, “which only goes to prove nice guys do finish first.”

Schloss said it was a treat to follow Boyd’s football career through college and eventually in the NFL. He noted that Boyd was as tough as they come on the field, but as nice and caring as one could be off of it.

Boyd once organized a fundraiser for the families of victims of the Sept. 11 terrorist attacks. He is also active in charities in New York, Boston and Detroit.

Don Steinert, a committee leader for the golf outing, said Boyd was one of the first people who came to mind when thinking about who to honor this year. As someone who went though Valley Stream’s school and community programs, Boyd was an obvious choice, Steinert noted. “We felt that he’s contributed to the community and been a good role model for youth,” he said. “Valley Stream is great place to grow up and it has groomed a lot of great people in our society.”