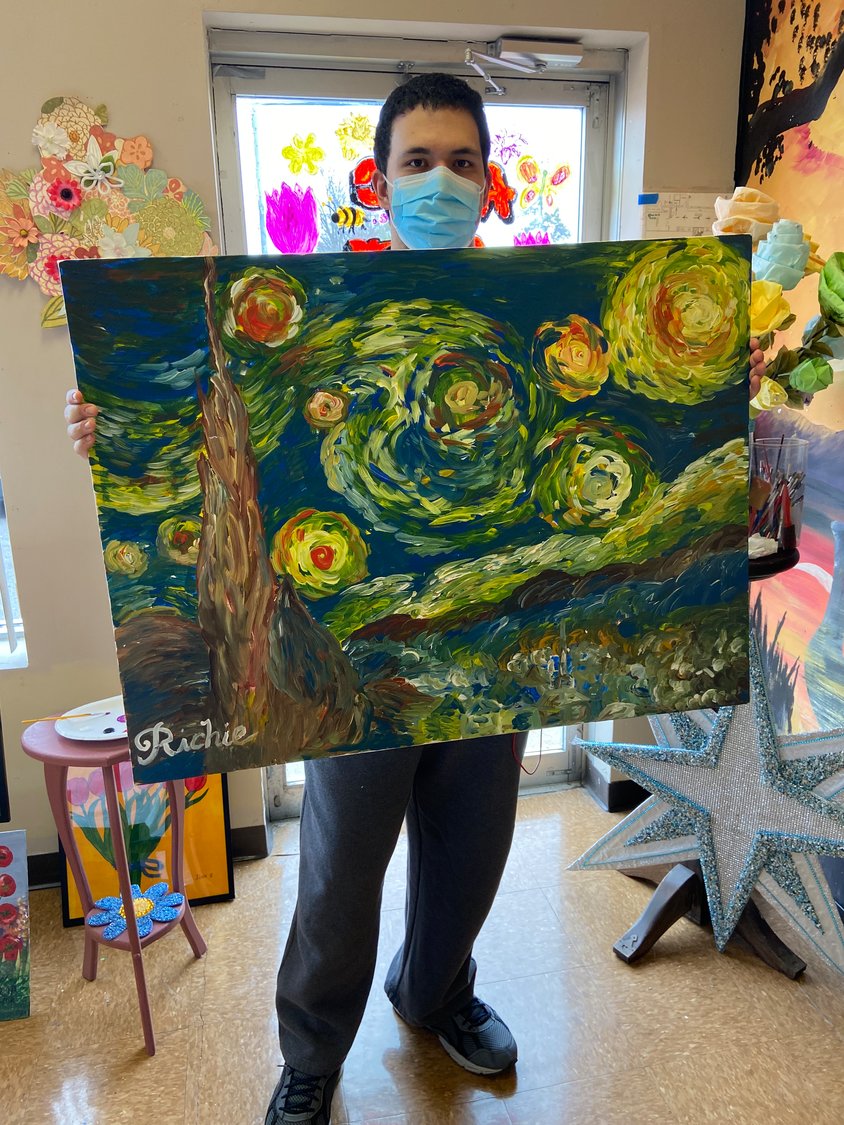 Richard Infante, 29, is one of the artists who help put together the exhibits.
Mallory Wilson/Herald 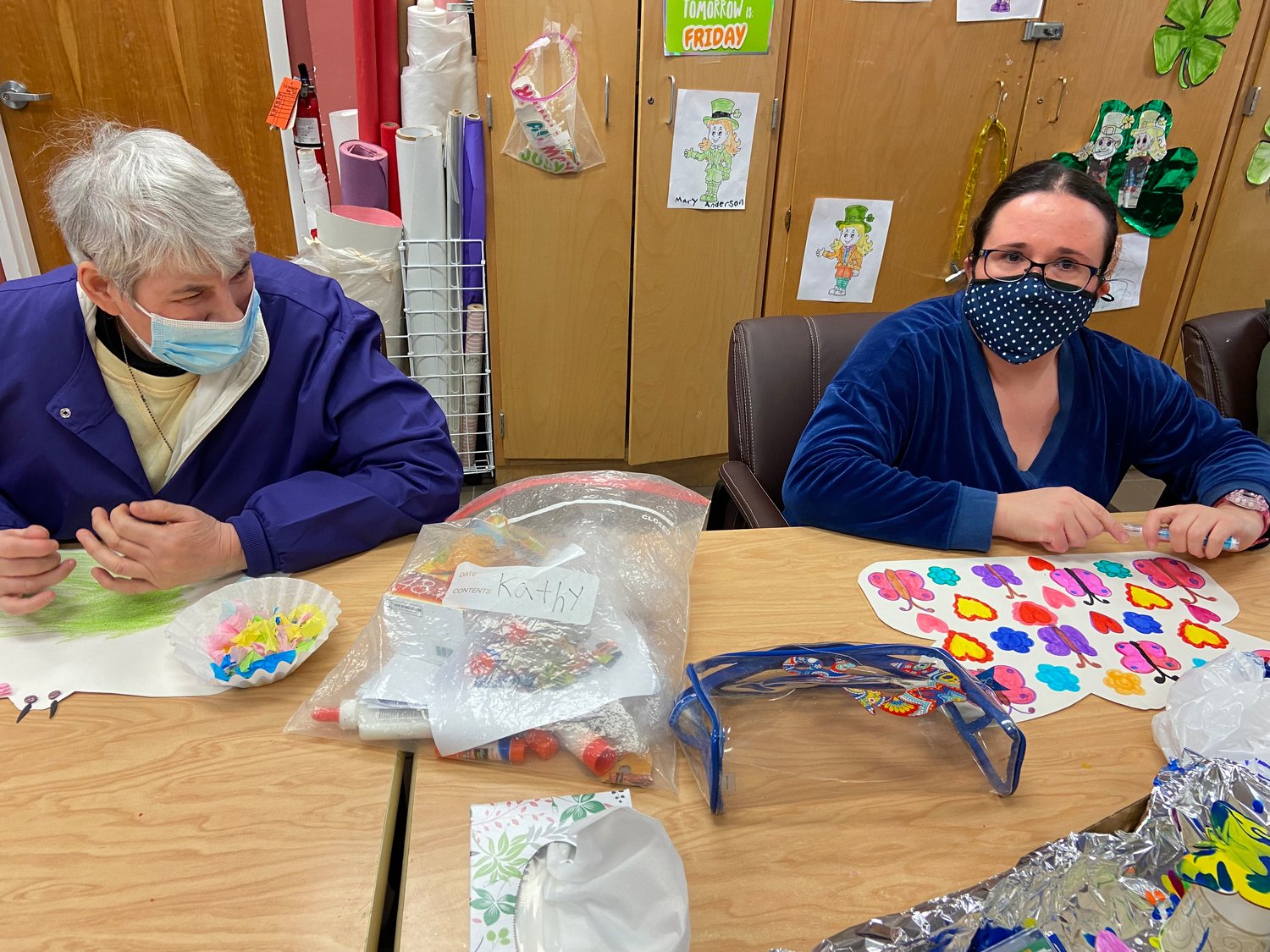 Kathy Staudter, from North Merrick, left and Donna Nowakoski, from Franklin Square, helped create the butterflies that will go in the “Garden of Dreams” exhibit. 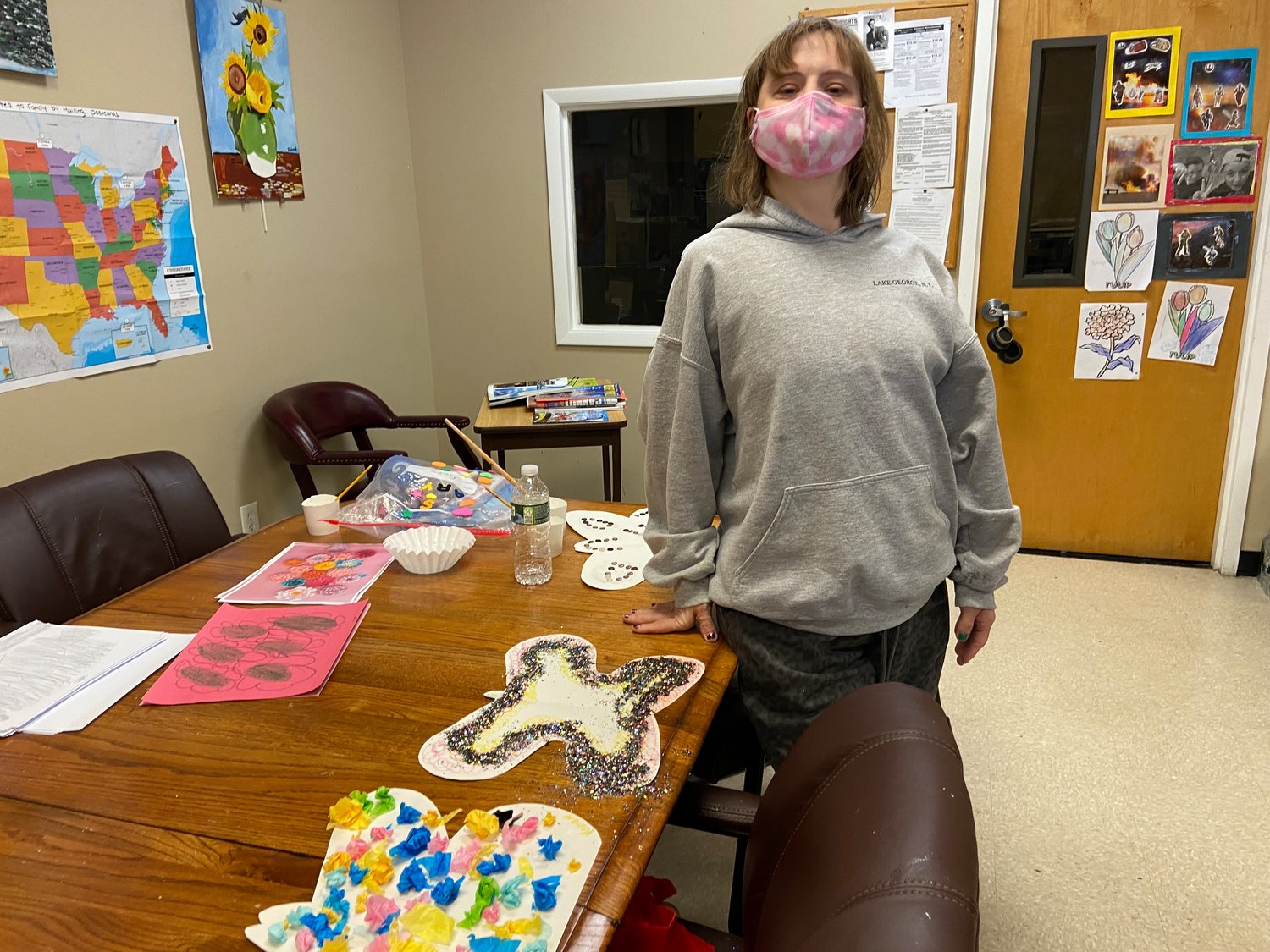 Yonah Piedagnel, 46, of Westbury, was proud to show off her butterflies.
Previous Next

We here make sure you know to always give them opportunities to really showcase their talents.”
Lisa Moosmueller, Director, AHRC Nassau East Meadow Art gallery
By Mallory Wilson

The AHRC Nassau East Meadow Art gallery is getting ready for its upcoming exhibit “Garden of Dreams,” which is set to open in June. The exhibit will feature art from the members of AHRC, who live with intellectual and developmental disabilities.

This is not the first exhibit for the gallery, which is located on East Meadow Avenue. In the past it has displayed artwork inspired by Vincent Van Gogh and by safari life. The group of artists who make up AHRC’s art gallery vote on the theme and then work on their pieces — either with a mentor or individually — with all types of media.

This exhibit has been a work in progress since before the new year, said Jason Diana, the program coordinator. “We usually try to do two to three exhibits a year,” Diana said. “It depends how ambitious we want each exhibit to be, and how much time it takes to prepare.”

AHRC Nassau is a chapter of The Arc of New York, a nonprofit organization that helps people with developmental disabilities. There are about 32 other AHRC programs on Long Island, but the East Meadow location is the only one that has a specific focus, Lisa Moosmeuller, the gallery manager, explained. The other locations focus more on community service. The point of these programs, Moosmueller said, is community integration and self- advocacy.

“These guys are being their own self advocates, and they’re speaking up and letting everybody know what’s important to them,” she said. “Through the day program we tried to link them to that interest so we’re kind of like an arm out into the community.”

The exhibit will consist of all aspects of a garden, Diana said, and right now the artists are working on butterflies and flowers. Every artist, regardless of ability, creates something for the exhibit. Some include flowers made out of the bottom of Coca-Cola cans and butterflies made out of small crystals.

“Every day these artists come in here and no matter what level of talent they have, they are so proud of what they’re doing,” Moos-mueller said. “And we here make sure you know to always give them opportunities to really showcase their talents.”

Some artists even go on to sell their artwork, Moos-mueller said, like Richard Infante, 29, of Roosevelt. “We’ve got Richard who comes to this program and looks forward to producing these grand pieces of art and he sells them, he makes money and he wins contests,” she said. “It gives him a sense of pride, it gives him a sense of purpose.”

When asked if he was surprised that his painting — a portrait of President Biden — sold, Infante said not at all. For an exhibit that the gallery did in 2018, Infante painted a huge mural of safari animals. Diana said that Infante even helps to teach some art classes. “Not only does he do a great job creating his own work, but he does a wonderful job teaching,” Diana said.

Moosmueller said that she loves coming into work every day and supporting the artists and their work. “I tried to explain to my staff that when you go to work everyday, don’t you like to leave work knowing that you contributed and that you’re important and that you feel proud about something you did that day,” she said. “And that’s our goal here at the gallery and we love to do that.”

She said that it has become increasingly hard to keep the direct support professionals that work at the gallery due to budget cuts from the state funding. “They assist every artist every day, not just with the art, but with everything that they need support with, whether it be eating, bathroom assistance or art,” she said. “We are still providing a wonderful day for the individuals, a wonderfully productive day, but we are doing more with less.

“It puts a lot of strain on the staff members,” she added.

Saundra Gumerove, the board president of the AHRC Nassau Board of Directors, said it’s really upsetting that these AHRC Nassau centers are having trouble keeping staff. “A lot of it has to do with the fact that they can make more money flinging hamburgers at a hamburger joint than they can helping people lead good lives,” Gumerove said.

A degree isn’t needed to be a direct service professional, Gumerove said, and it’s a really fulfilling position. The centers rely on government funding and “we can’t pay people more than we receive,” she said.

Gov. Kathy Hochul, in her 2023 budget, has increased state funding for the office of people with developmental disabilities from $500 million to $4.5 billion, which Gumerove said makes her hopeful that things will change soon in terms of staffing.

The “Garden of Dreams” exhibit will be open June 1 for people to visit at 189 East Meadow Avenue. In July the exhibit will be moving to the Forest City Park in Wantagh to be on display in the park.