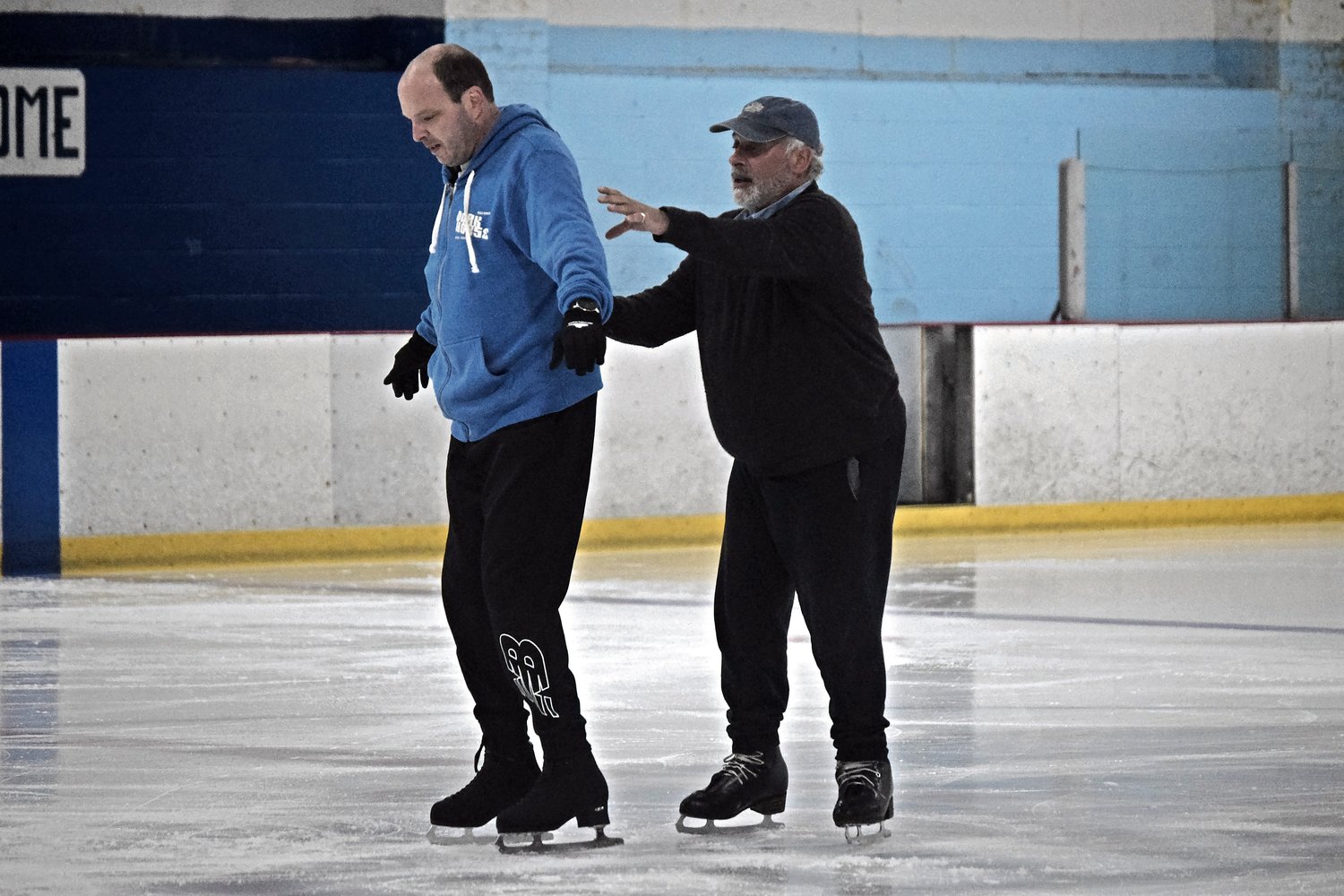 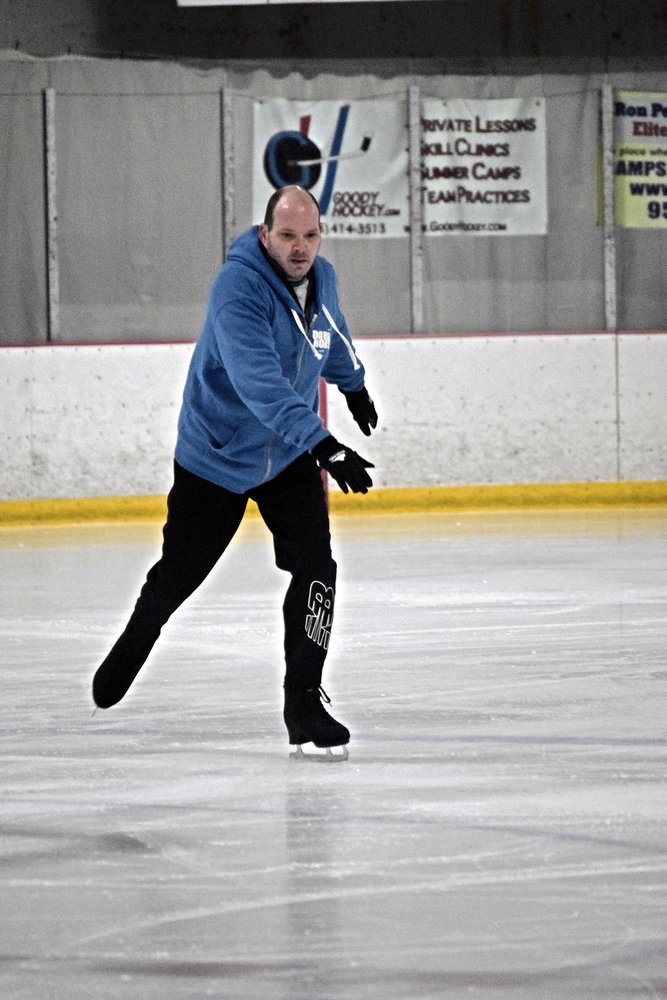 Practice makes perfect and Mark Getman is putting in the time to perform the best he can on the ice.
Jeffrey Bessen/Herald
Previous Next
By Jeff Bessen

Two men stood near the boards on one side of the ice rink as a young girl skated and twirled past them and an adult woman skated on the far side. One man instructed the other on the finer points of skating as the other aimed to apply the instruction.

As the chilly air enveloped those inside Iceland, a skating rink in New Hyde Park, on a Friday morning in early June, Cedarhurst resident Mark Getman, 49, looked to recapture a portion of his youth when he was a pretty fair figure skater.

“I’m doing it because I stopped, maybe there was peer pressure,” Getman said, adding that he and his twin brother Steven were nearly 17 when both stopped figure skating. “It just wasn’t popular with boys at the time. We were teenagers, we wanted to do other things. Growing made is so difficult to do and I got frustrated and just stopped.”

When we think of figure skaters the first images that come to mind are lithe young women twirling like a dervish in sparkling costumes or tall, muscular young men moving elegantly to a variety of musical genres. Not a solidly built middle aged man making the clubhouse turn to 50 (in September) who is a background investigator for General Dynamics, an ordained rabbi who serves part-time as the spiritual leader of Temple Emanuel in the Canarsie section of Brooklyn and as the volunteer public affairs director for the New York State Guard.

“I kept skating all these years in regular skates because I enjoyed being on the ice, and when I saw this (older adults competing) I said I want to go to back and do the best I can,” Getman said.

The embers of a youthful career that reached the intermediate level still burned. Watching the Olympics and finding an adult ice skating Facebook page renewed Getman’s interest in figure skating and competing. In March, he returned to the ice.

On the rink, Getman listened to coach Adam Leib, 59, a native Long Islander from Roslyn who was one of the top United States figure skaters in his youth.

Leib trained Olympic champion Sarah Hughes, from Great Neck, and as a skating analyst for The New York Times was at the center of a storm when he wrote an article “How Sotnikova Beat Kim, Move by Move,” and analyzed the performances of Adelina Sotnikova and Kim Yu-na at the 2014 Olympics in Sochi, Russia.

Taking a hands-on approach, Leib grabbed the front of Getman’s skate to demonstrate better technique. On the sidelines, Leib sketched out step by step advice and movements for Getman to practice.

“I think it’s wonderful,” Leib said, when asked what he thought of his student’s attempt to resurrect an activity from his youth. “Aging is about taking things off the table, staying young is about keeping things on the table, so it’s a way to stay young.”

Leib noted all that goes into figure skating from the physical demands, including have to move like gymnast with what he called “cat-like reflexes,” while having to start and stop with all the power and torque of a motorcycle, he said. “It’s fun, exhilarating and it’s challenge,” Leib added. “Every day you look inside yourself and say how do I make myself better?”

Getman will take part in a show of adult figure skaters at The Rinx in Hauppauge on July 10. Yesenia Gilroy, who heads the figure skating program, said there are at least 30 adults who aim to compete and roughly 100 recreational figure skaters participating in The Rinx’s program.

“They are returning to figure skating and others are getting back into exercise,” said Gilroy, adding that the skaters are looking for a “less traditional” way to be more active.

Gilroy, who is aware of Leib’s reputation in the skating world, shares a similar perspective when it comes to coaching. Children are easier to teach than adults who are more likely to be hesitant to take the direction until they see some success. “Adults know too much and need convincing,” Gilroy said, “they see risks and every aspect has to be explained. You have a relationship and build trust.”

For Getman being on the ice is, “cool, refreshing and calming.” But there is also work to do as he is grandfathered in at a higher level because of his past skating history and will be required to perform double jumps.

“The other day I was doing combos one jump after another jump and it takes a lot of energy, but when you do it it’s like wow I did that,” he said, smiling. “I have to do it again. It’s invigorating. If I could stay on the ice all day I would.”