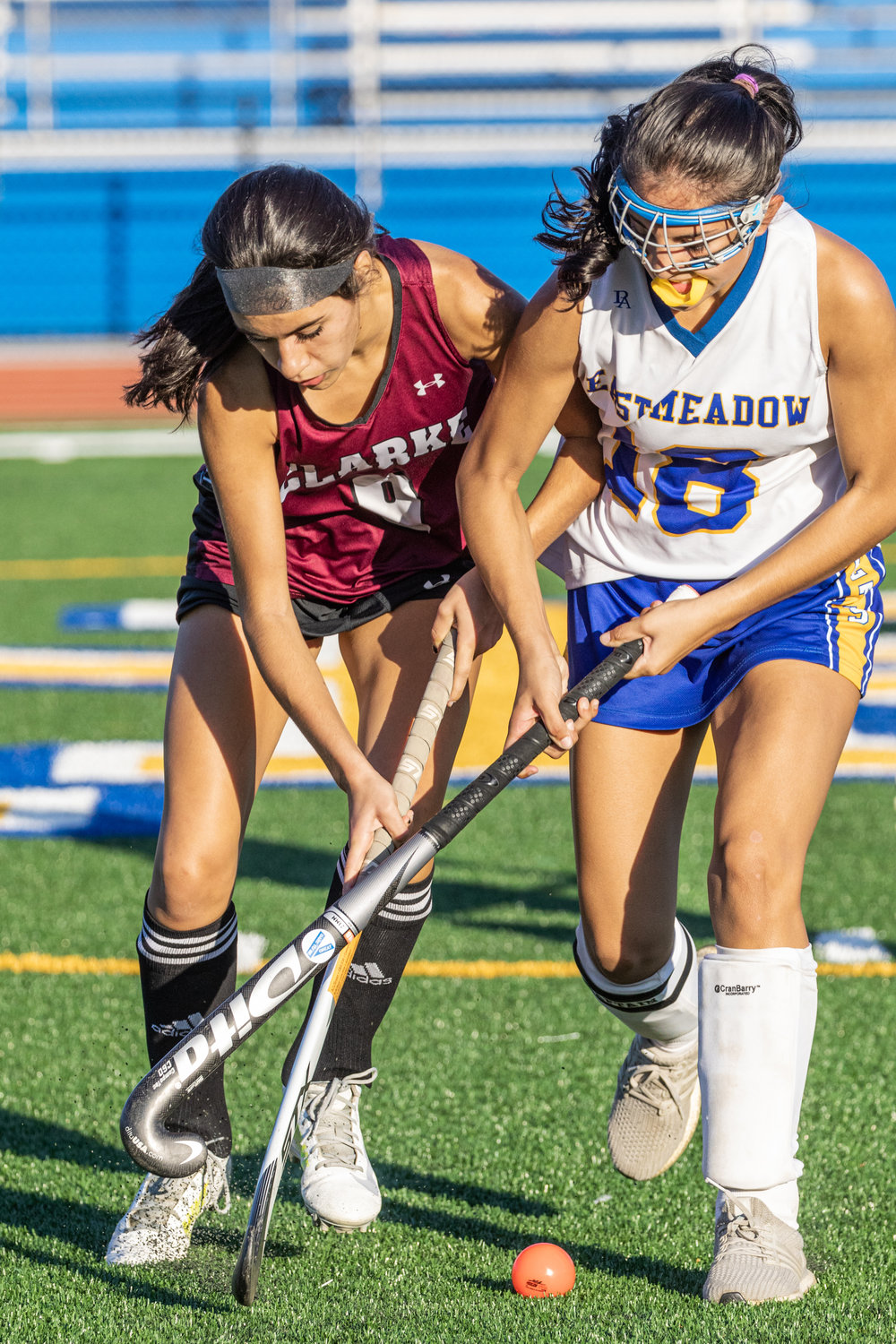 Though Clarke managed a tie and squeaked out a couple of one-goal wins over a six-day span, the second time around the Nassau Conference II field hockey schedule proved much tougher than the first.
Then on Oct. 20, the Rams were rejuvenated, coach Brittany Dougher said, by a matchup with rival East Meadow and put together their best offensive performance of the season to seal the conference title. Sophomore Sophia Papacostas scored four times and her senior sister, Andrea, and sophomore Lina Resende added goals as Clarke rolled to a 6-1 road victory.
“It’s always a good matchup and a fun rivalry with East Meadow,” Dougher said. “We hadn’t lost games or lost confidence, but I felt we were in a little bit of a lull and playing East Meadow helped fuel the fire we needed re-lit.”
Senior Catherine Amini added three assists for the Rams, who improved to 10-0-1. “We’re playing a lot of strong teams and most of them we saw twice,” Dougher said. “We surprised ourselves a little bit with how well we were doing. We have a lot of raw talent and athleticism.”
Sophia Papacostas has been the ignition switch for the offense, scoring 15 goals, and has a “sibling chemistry” with Andrea and together they lead the attack, Dougher said. Andrea Popacostas has 5 goals. “Sophia is a constant threat and just has a knack for putting the ball in the net,” the coach said. “She got varsity experience and confidence in the spring. She practices and plays at 100 percent.”


Amini, a captain and three-year starter, serves as the quarterback on the field and leads the team in assists with seven. “She’s a level-headed and solid two-way player who helps our defense and generates offense,” Dougher said.
Additional keys to the midfield are defensive-minded Angelina Ferrara and offensive spark Gianna Smith. Both are senior captains and the latter has three goals.
Junior Nicole Servider is a tremendous defender but also a weapon on corners. She has a couple of goals and a few assists. “It’s tough for anyone to get by her,” Dougher said. “Nicole has great stick skills and is quick, smart and patient yet aggressive.”
Junior Sophia Ruperto is one of the team’s best communicators and “keeps everyone focused and positive,” Dougher said.
Servider, Ruperto and sophomores Lauren Henning and Britney Roller “create a wall” in the back, Dougher noted, that makes it tough for the competition to keep the pressure on senior goalie Shanza Ahmed, who has more than 40 saves and a large hand in six shutouts. “Our defense stands out,” the coach said.
The Rams played two intense overtime games against Friends Academy, winning both. Amini set up Sophia Papacostas for a 1-0 win in the first matchup on Sept. 24, and the rematch was a 2-1 shootout victory Oct. 6. Ferrara scored in regulation with an assist from Servider.
Clarke will be part of the six-team field in the Class B playoffs, which open Friday and conclude with the county championship game Nov. 4.