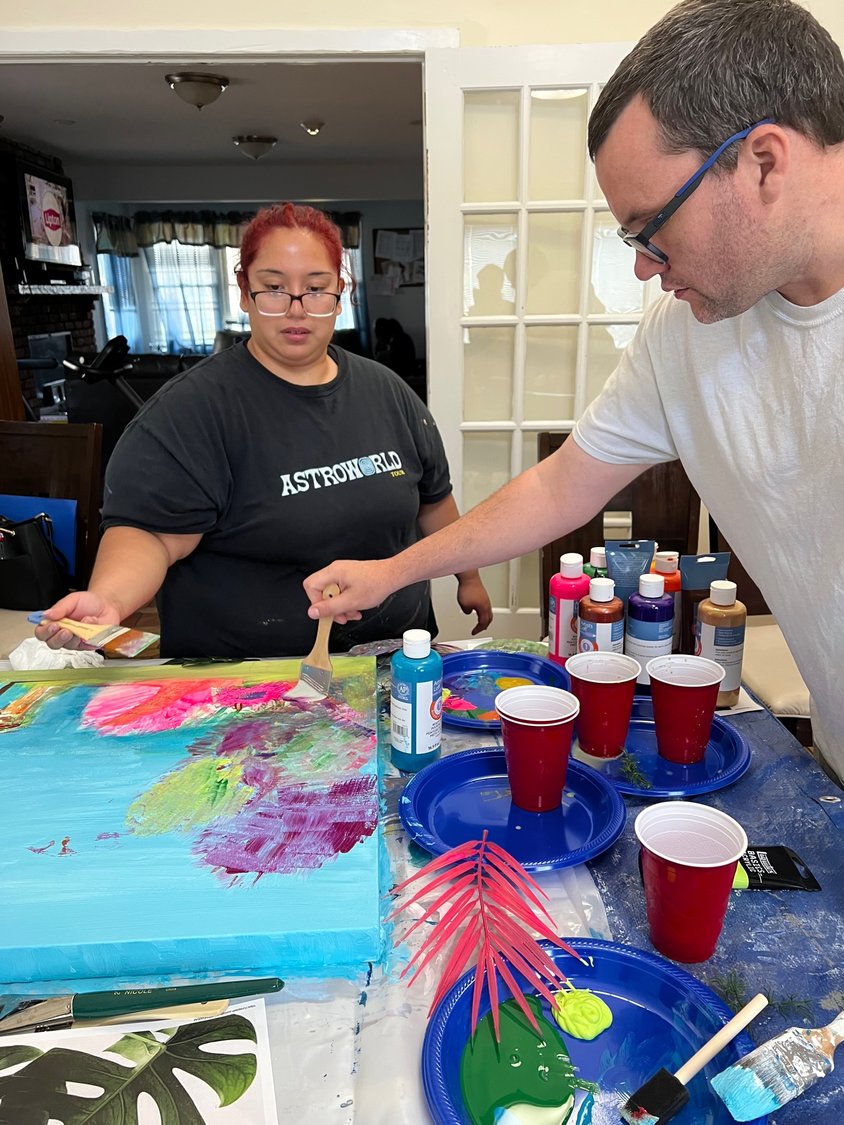 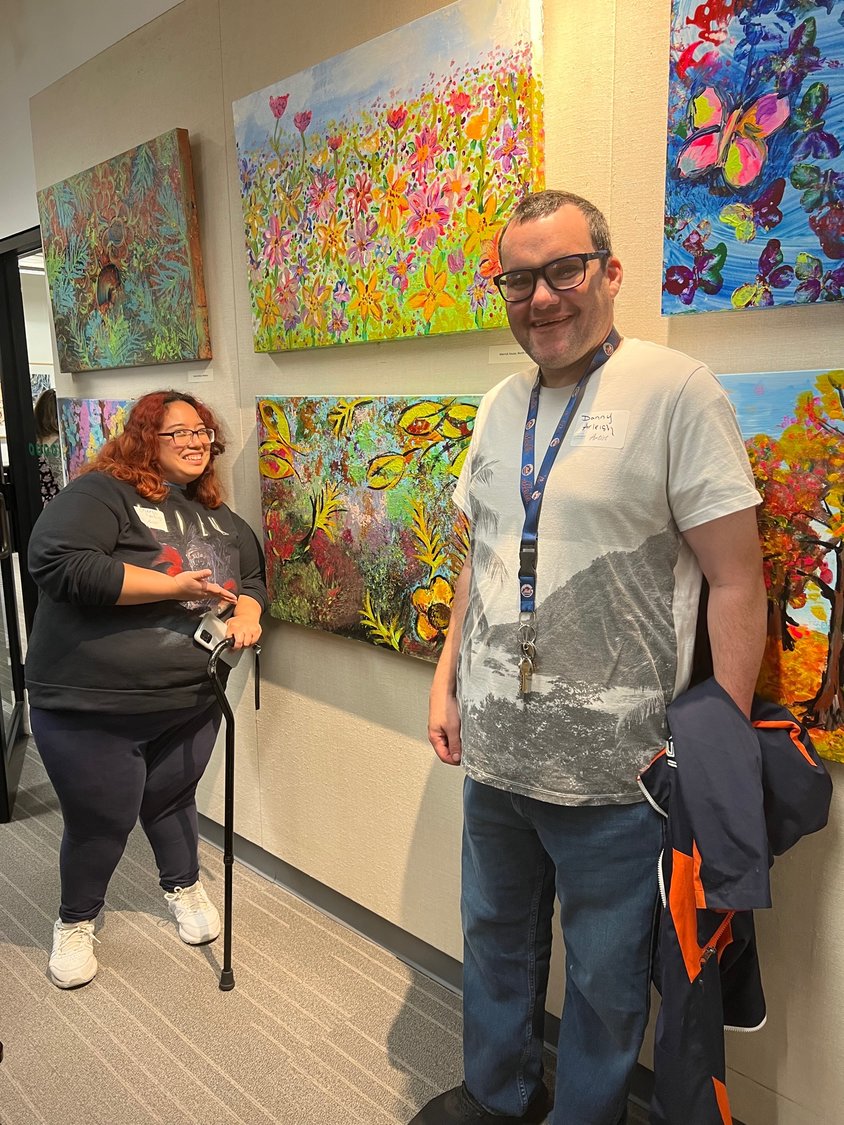 Cheryl Leonardo and Daniel O’Shea showed off their art piece at the art show on Sept. 28 at the Port Washington Library. 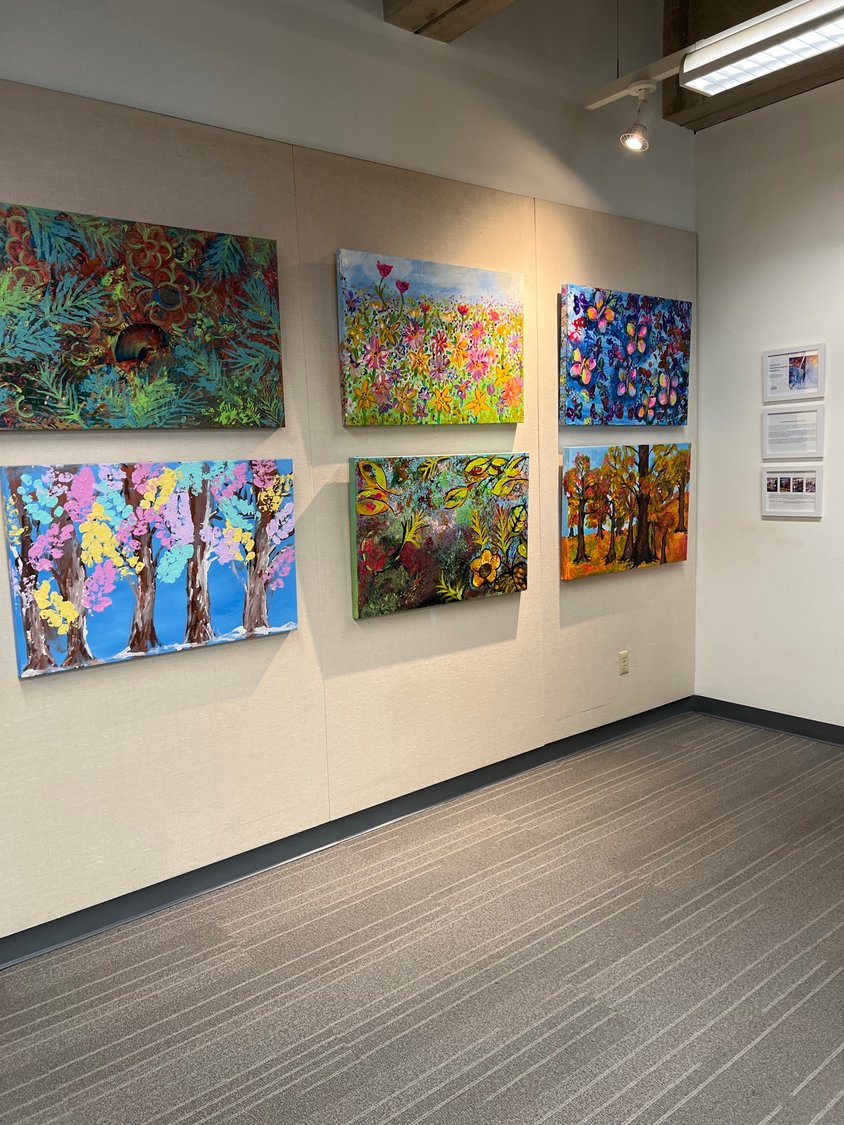 Fifteen of CMA’s houses created art that was displayed at the show. After the art leaves the library, it will head to multiple locations before ending its travels at the house where it was created.
Previous Next

I cannot express how profound an experience it was for me. I know that the residents got a lot out of it, but I got as much, if not more.”
Michelle Stack, Director of Development and Communications, Community Mainstreaming Associates
By Mallory Wilson

A group of six adults living in an East Meadow group home have come together to create art for an innovative creative experience.

Residents of 15 different group homes, all part of CMA, worked on a large collaborative painting — in their respective homes — with staff and CMA instructors Michelle Stack and Nicole Facey.

Residents of the Arleigh House, in East Meadow, created a large floral piece that was showcased at a reception at the Port Washington Library on Sept. 28.

“The guys here, they love doing art projects, they love arts and crafts, they love when people come visit them and do fun things with them,” Jacquelin Moore, the house manager at the Arleigh House said. “I’m not just saying this because I work for the organization, but it looked like a professional painting.”

The houses maintained by CMA host neurodiverse individuals ranging from those who are fairly independent to those who need a lot of support due to their severe physical and cognitive disabilities. Moore said that she got involved beccause she loves to help people.

The East Meadow house has six adults in residence. Some have jobs and some go to programs, but at the end of the day they come back to the house and live like anyone else — cook meals, clean their rooms and watch TV.

“We use the model that we do with and not for them,” Moore said. “We will assist and help them, but we don’t do things for them.”

The art project was the brainchild of Stack, the director of development and communications at CMA. When she started with CMA, she explained, that since she was an artist, the organization’s Executive Director Eileen Egan asked her if she would ever want to do a painting in any of the houses. Stack was thrilled with the idea.

Stack said that she hit up Blick and Michael’s art stores and they donated the canvases, paint, brushes and anything else she needed. “It was wonderful,” she said. “I decided to do a large painting with each group as a team and collaborative project.”

She and Facey,the manager of Supportive Living, went to two houses a week from June to August assisting residents with their paintings. The painting they created was determined by the personalities at the house, Stack said.

“I cannot express how profound an experience it was for me,” she said. “I know that the residents got a lot out of it, but I got as much, if not more.”

Stack said that residents were enthusiastic with the experience of painting and collaborating with their roommates. She noted one man from a house in Port Washington, who never left his room or socialized with his roomies, blossomed once he got involved with the painting.

“When he came to the art reception, I was shocked to see him there and he told me he was nervous,” she said. “I told him not to worry that I would protect him.

“It was life changing for him. The organization had been working so hard to bring him out of his shell a little bit so it was wonderful.”

Moore said that the paintings were unreal, and that seeing them hung up felt like an actual art show.

“They were amazed when they saw it. I was amazed with the finished work” Moore said. “The fun thing is that they’re such creative people. Some people look at them and just see their disability and they label them, but oh my god they’re so creative.”

Stack said that she never expected the paintings to go anywhere other than the art show — that closes on Oct. 5 — but there was such an outstanding reaction to the paintings that the show will be traveling to other places on Long Island for a year.

The organization’s sponsorship program, allows the exhibit to travel. The next stop is The Muttontown Club, a county club in East Norwich, before heading to three different corporate CMA offices, and to a gallery in Brooklyn. Stack also said she’s been talking to two different museums on Long Island.

After the pieces are done traveling, they will reside in their respective houses.

“We never expected this outcome, and we are thrilled,” she said. “I can’t tell you the pride in the residents and their parents.”