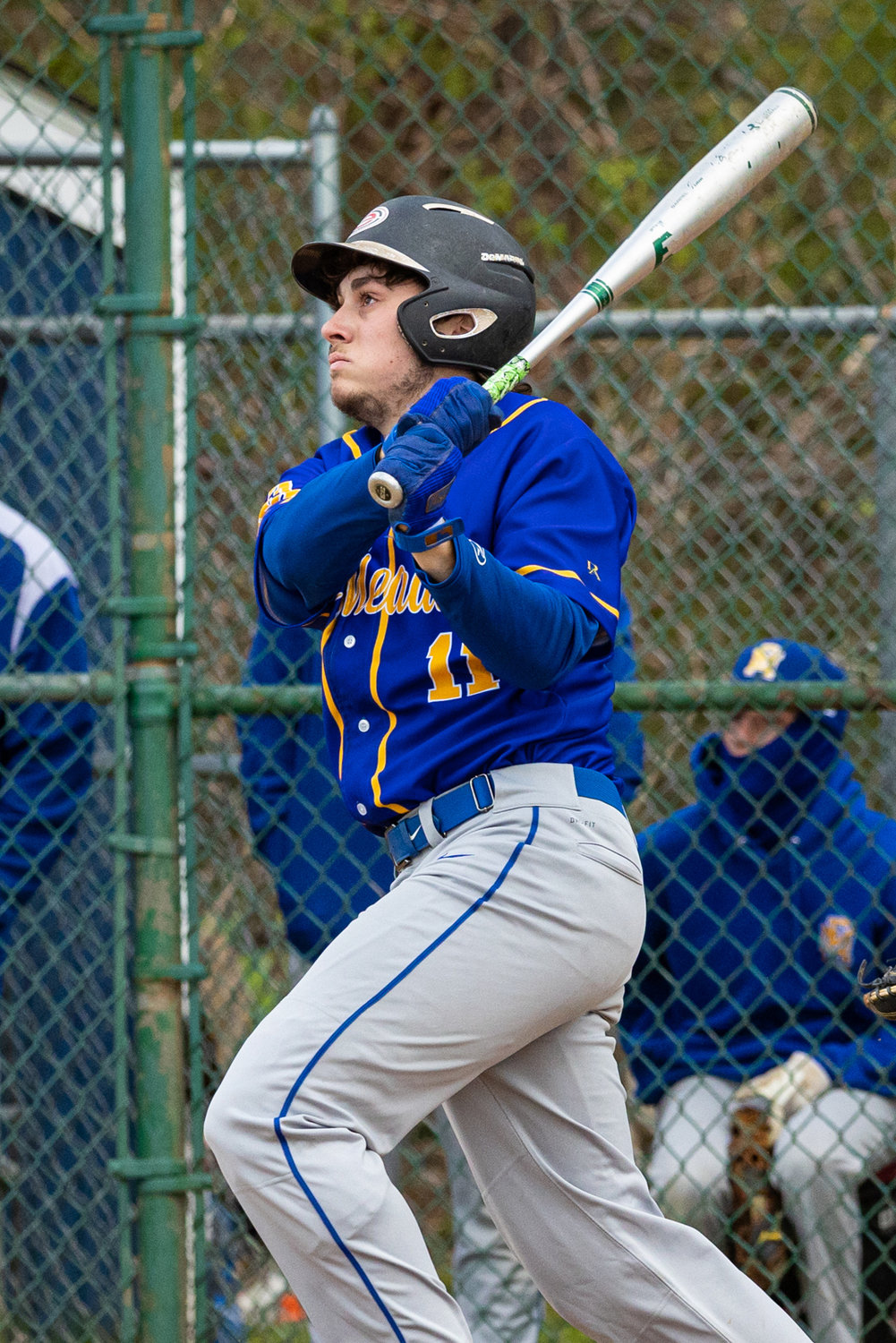 James Reilly is one of East Meadow’s three senior starting pitchers and also ranks among its offensive leaders.
Karen Millindorf/Herald
By Tony Bellissimo

It’s been a positive start to the Conference AA-II baseball season for East Meadow.
The Jets, who were up-and-down throughout 2021 and finished 9-7, experienced many more highs than lows this April and all but assured a trip to the Nassau Class AA playoffs. They sandwiched sweeps of Herricks and Valley Stream Central around dropping two of three games against conference-leading Plainview to take a 7-2 mark into May.
“We brought back only two starters but I thought we had a chance to be very competitive,” East Meadow coach Vin Mascia said. “We’re off to a nice start and I think we’re pretty safe as far as the playoffs are concerned. But we still have areas to improve and we want to get the highest seed possible.”
The Jets have some rarities on the roster — three senior starting pitchers working with a freshman catcher, and a successful switch-hitter at the top of the lineup.
Shawn Haber takes the mound in each series opener and has split four decisions, including non-leagues. He was a reliever a year ago and throws a fastball with pop and a quality breaking ball, Mascia said. “He doesn’t get hit hard and when he’s throwing strikes and getting ahead of hitters, he’s tough,” Mascia noted.


Daniel Jasmin is a southpaw power pitcher who handles the middle games against conference opponents. He earned his fourth win in as many decisions April 26 when the Jets pushed across two runs in the top of the sixth inning without the benefit of a hit at Valley Stream Central to pull out a 5-4 victory. Jasmin struck out 13 and has 30 Ks in 21 innings. He’s also a talented outfielder. “Daniel has a cannon arm and does a nice job of keeping the ball down in the zone,” Mascia said.
James Reilly pitches the third game of each series and earned the win April 28 in a 12-2 victory over Valley Stream Central that saw senior Steven Edwards drive in three runs. Heading into May, Reilly was tied for the team lead in runs (10) and RBIs (9) while hitting .360. He also has a pair of outfield assists.
Behind the plate, freshman catcher Joe Lanza made the leap from middle school ball to varsity and has already proven an “excellent receiver and blocker,” Mascia said.
Anchoring the infield and stepping into the batter’s box first for the Jets is junior shortstop Alex Rodriguez. He can hit from both sides of the plate and is aggressive on the bases, leading the team with 6 steals. Junior Dom Steinmark has bolstered the offense, hitting .400 in 16 plate appearances while starting at first base. Senior Joe Piano starts at second, and there’s a rotation at third.
Of the seven conference wins last month, Mascia pointed out a 6-4 triumph over Plainview as the highlight. East Meadow suffered mercy rule losses in each of the first two games in the series. Steinmark drove in two runs, and junior Devin Lake recorded the final out to save the W for Jasmin.