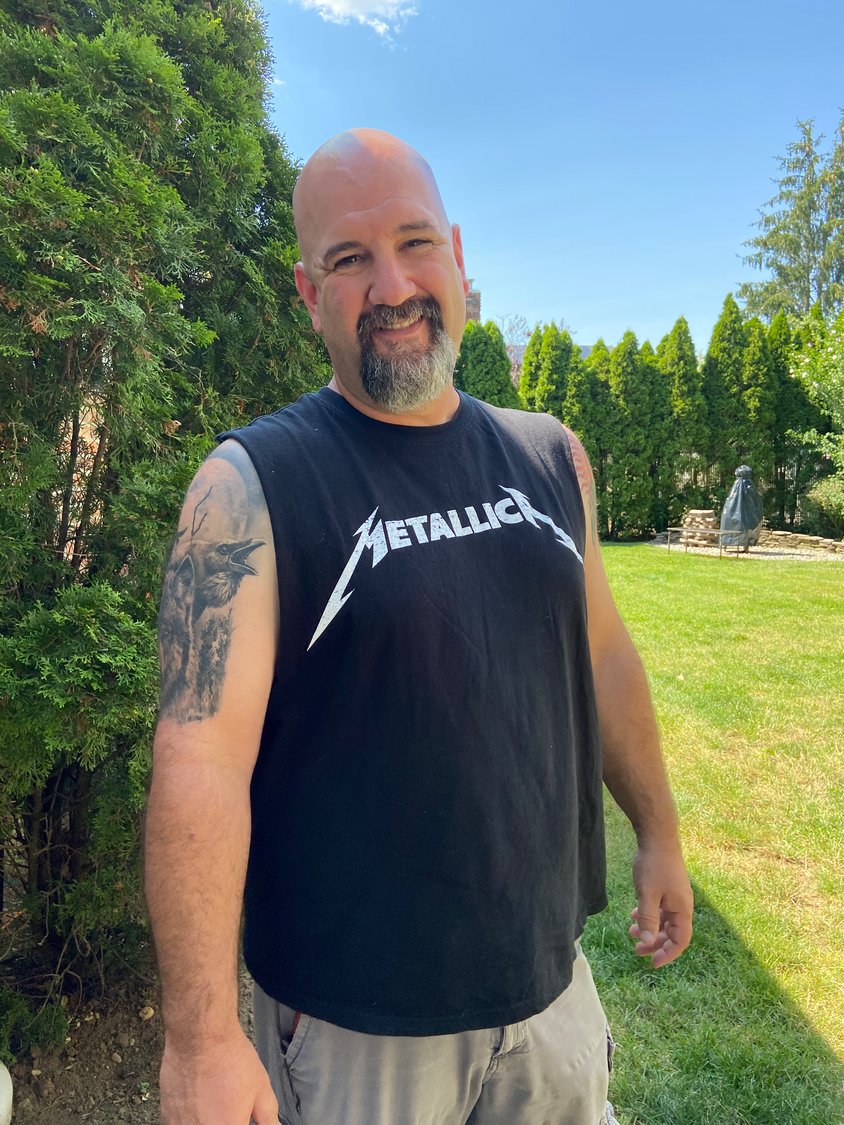 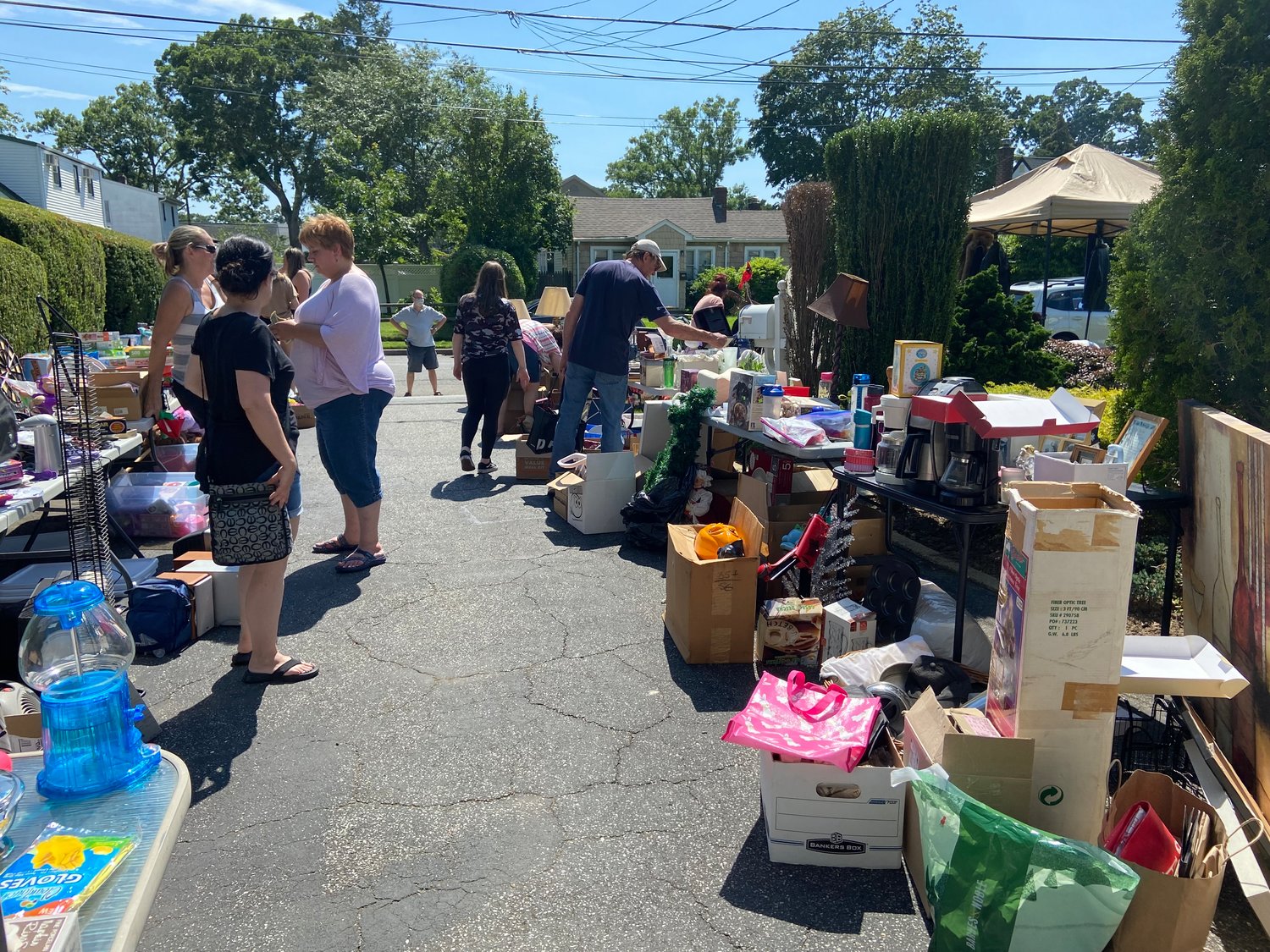 Friends, family and neighbors offered Justin Weiss money and other donations at his garage sale on Saturday.
Mallory Wilson/Herald
Previous Next
By Mallory Wilson

Weiss, who has multiple sclerosis, hopes to join the 501st Legion, an international organization dedicated to the creation and wearing of detailed replicas of villains from the “Star Wars” universe. This includes Sith Lords, clone troopers, bounty hunters and other villains from the movie series. There are legions worldwide. The New York City and Long Island legion is called the Empire City Garrison. Its motto is “Bad Guys Doing Good.”

According to its website, the 501st’s mission is to promote interest in “Star Wars,” facilitate the use of costumes and contribute to society. Its members often volunteer in hospitals, charity events and fundraisers.

Weiss, 49, has been obsessed with “Star Wars” since he was a child. The first movie in the series premiered in 1977, when he was 5. His father took him to see it, and the rest is history, he said. “It’s always just on in the background,” he said. “It’s just fun, and it takes you out of reality.”

Weiss said he couldn’t count how many times he has seen the “Star Wars” movies. He has seen every one in a theater. “I sat through all the movies with him when we met,” said his wife, Nancy.

Although the 501st Legion is not affiliated with Disney or “Star Wars” creator George Lucas’s production company, Lucasfilm, the companies are familiar with it. Some members were even hired as extras in the Disney+ series “The Mandalorian.”

In order to join the legion, which was founded in 1997, a screen-accurate costume is required. The costumes don’t come cheap, costing upward of $2,000. Every piece of the costume is acquired from vendors whom the 501st recommends, to get the most accurate look, Justin explained. When you acquire all of the pieces of the costume, the 501st must then approve it.

Justin’s costume of choice is a biker scout. “I’ve always been one to root for the villain in the movie,” he said. “I love what they do and all of the events they go to.”

He first saw the 501st Legion at a convention in 2011 called Eternal Con.

For 10 years he ran a fundraising group called Team Phoenix, which raised money to fight multiple sclerosis. It has donated over $200,000 to the cause. Justin was diagnosed with MS when he was 36, and his mother, Lyndi Weiss, died of the disease when she was 53. Justin and his family and friends have held garage sales, bar events and more to help raise money for MS research.

After he collects all of the pieces of his costume, he says, he wants to walk around town and run errands to show it off. “My friends and family are ecstatic for me to get this costume,” he said. “I have no pieces yet, and I’m excited to start collecting them.”

Weiss once owned a landscaping company, but gave it up to pursue other opportunities. He accepted a job as a custodian at McVey Elementary School. “Originally I was thinking about a night job,” he said. “When they offered me a day job, I took it. It’s less money, but it’s more satisfying.”

He has volunteered at McVey in the past, often helping at the Halloween festivities. His daughter Megan, 18, grew up in East Meadow, and he loved helping out and being around children, which was what moved him to take the job.

In addition to funding Weiss’s custom costume, the proceeds from the garage sale will go to the Make A Wish Foundation (by way of the 501st Legion) and to the Vietnam Veterans of America.

Weiss’s good friend Anthony Carbone was the primary organizer of the garage sale. Other friends and family helped out as well. “They know how much I’ve wanted this, and they wanted to help make it happen,” Weiss said. “The response has been incredible. I’m so overwhelmed. I was almost in tears over the support.”

“He’s been into this for as long as I’ve known him,” Carbone said. “We always talked about getting the community together to support him. He does so much good for everyone else. It’s about time the community came together for him.”

The garage and shed at Weiss’s house were filled with donations, Carbone said. “He’s a good guy,” he said of his friend. “He deserves this, and it’s awesome that everyone actually came together for him.”