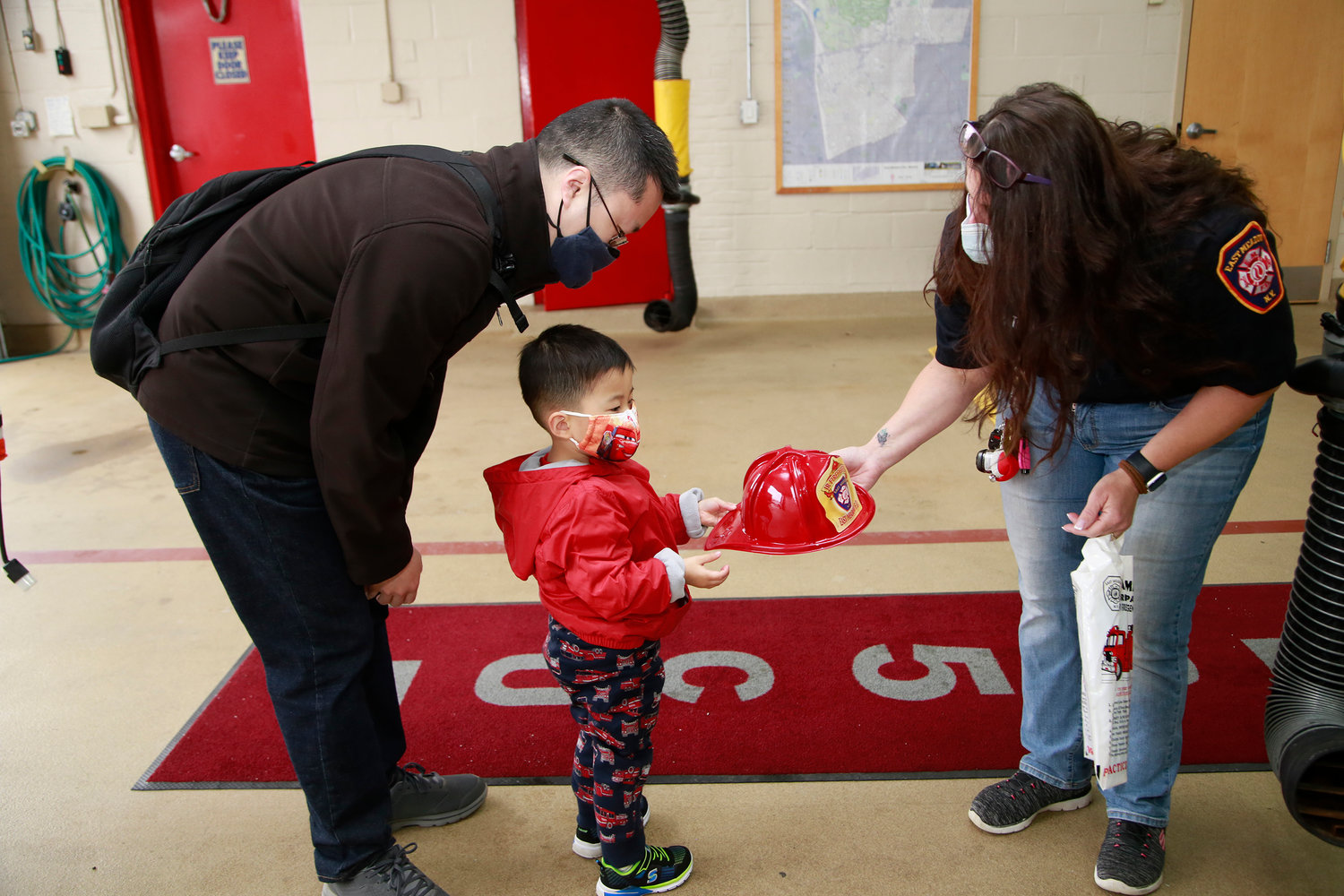 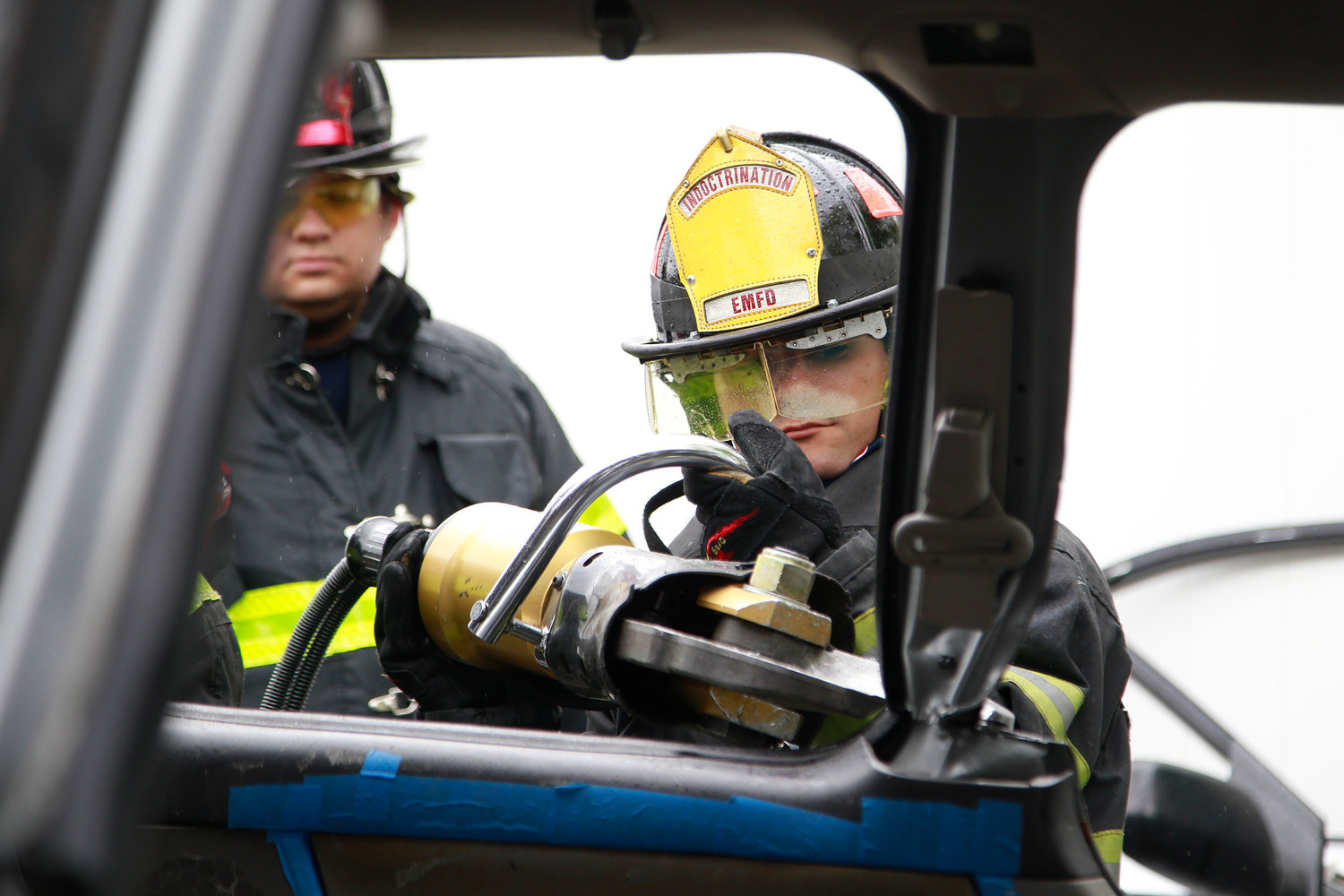 Firefighter Ionut Koshar, of Ladder 1, cut through an SUV’s window frame in one of the demonstrations.
Photos by Sue Grieco/Herald 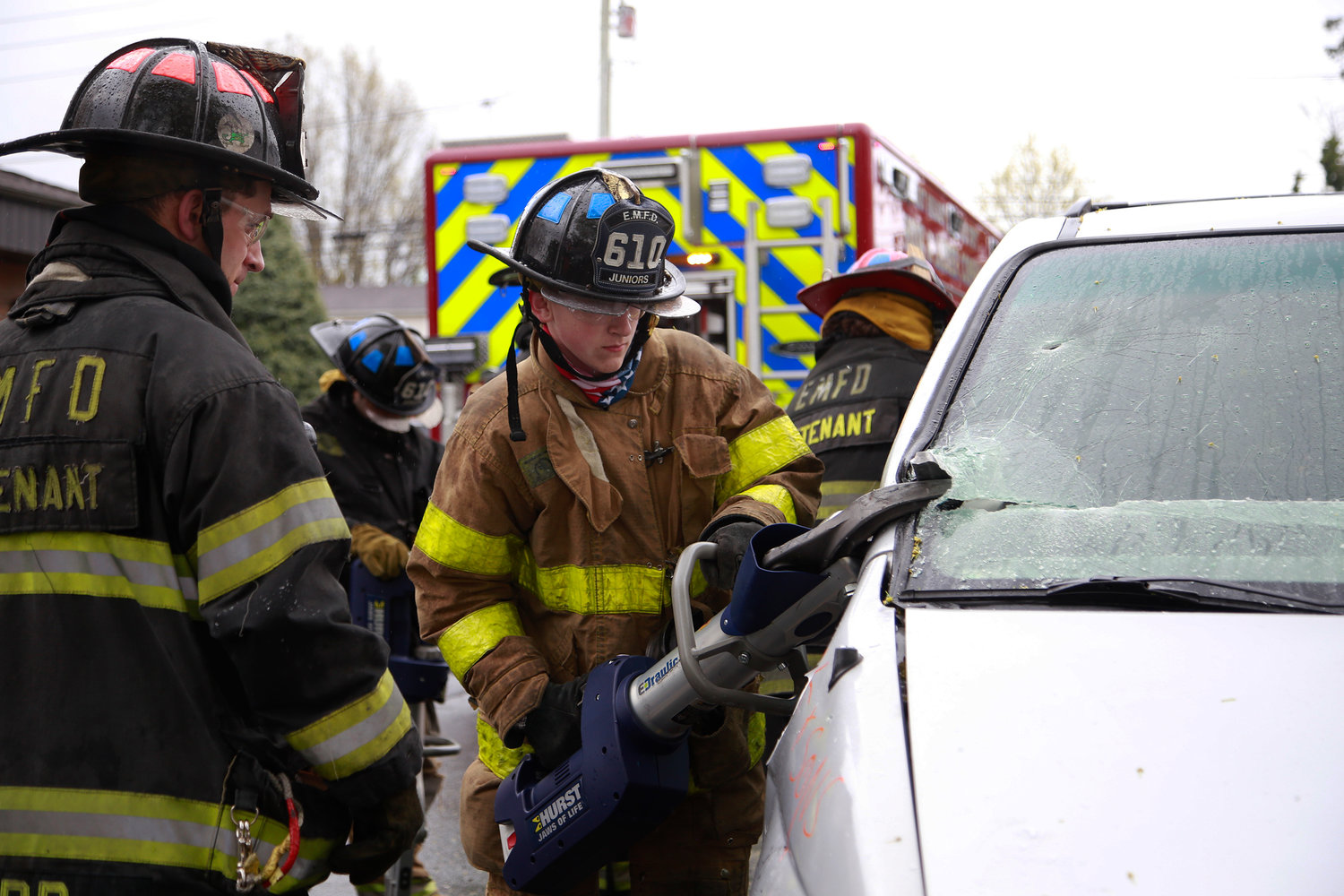 Danny Corr, a lieutenant at Ladder 1, left, supervised junior firefighter Aidan Finneran, 16, when he used the Jaws of Life on a vehicle during one of the demonstrations.
Photos by Sue Grieco/Herald
Previous Next
By Laura Lane

Last Sunday, the East Meadow Fire Department gave those who’ve wondered what it would be like to be a firefighter or an emergency medical technician an opportunity to find out. As participants in RecruitNY, an annual statewide initiative to encourage recruitment, five EMFD firehouses opened their doors to the pubic in East Meadow and Salisbury.

“We open up our doors to show what we do and how we do it,” said Tom Tergesen, an EMFD ex-chief from Company 4 in Salisbury. “We all have different backgrounds at our Fire Department. One of our members, who’s from India, came here to talk to us about joining. After he became a citizen, he joined.”

Unlike many other fire departments, the EMFD has not seen a drop in membership in recent years. In fact, people continue to join, Tergesen said. At RecruitNY, five people applied to become firefighters. That’s a good thing, because Tergesen said there has been an increase in the number of people needing help. “Our ambulance calls went up,” he said. “We’ve had 220 so far this year. That’s a lot of calls.”

He attributes the increase to pandemic-induced changes in people’s lifestyles: Many now work from home, and others avoid going out and risking infection. Three-quarters of the calls the EMFD receives are Covid-related, Tergesen said.

“Last year, not many of us went into a house,” he recalled. “And we had to ask the residents a lot of questions. People were scared and didn’t know what to do.”

Answering a call has changed for firefighters since the outbreak of Covid-19. Now, if it is determined that the virus is or could be present, firefighters will don personal protective equipment to augment their uniforms. The PPE — a white suit, mask and goggles — is discarded after the call. Decontamination procedures are followed as well, including sanitizing the ambulance, firetruck and the gear used by EMS workers.

RecruitNY gives residents a chance to meet their local firefighters. “Volunteer firefighters and EMTs are everyday heroes who dedicate their spare time to helping people in their times of need,” James Walsh, the chief of the department, said. “We’re always looking for new members, and it’s our hope that after seeing the incredible camaraderie of the firehouse up close, more people will be interested in becoming a part of our very special family.”

There were several demonstrations, including a simulated car fire in which the Jaws of Life were used for rescue, and firefighters responding to a call that didn’t involve a fire. Tergesen also delineated the two types of EMTs, basic life support and advanced life support.

“BLS EMTs give oxygen, aspirin and nitroglycerin to patients with certain heart issues, and glucose to diabetics,” said Tergesen, who is a BLS EMT. “ALS EMTs can start IVs to administer medicine fluids and manage an airway that’s been compromised by trauma or any type of medical condition.”

Charles Messina, 3, the son of ex-captain Brian Messina, wore his “firefighter suit” to the event — a red plastic fire hat, a reflector vest and powder blue rubber boots, which matched his eyes. Asked if he would like to be a firefighter someday, he had a lot to say, although it was unintelligible.

“Charlie has the suspenders and fireman pants at home too,” said his mother, Diana Messina, who was keeping an eye on her other two children, Anna, 7, and Alexandra, 5. “I bring my kids here every year for this and have been doing this since they were babies. They love coming to this.”

Ed Licciardo has been a member of EMFD’s Company 4 for 13 years. He put his training to use on March 4, when, while eating dinner at a restaurant, he rescued a toddler who was choking.

“The trainings we receive and have to do to get certified is top notch,” Licciardo said. “We want it to be like muscle memory for our members, which it was for me when the child was choking.”

Next year, Licciardo, who is a first lieutenant, will become a captain of the department. “I like being a firefighter because I like giving back to the community,” he said, “and I like helping people too.”

There is one request that firefighters always have, Tergesen said. “If you see an ambulance or a fire truck,” he said, “please keep your distance. We need the room to work.”