Chamber of Commerce to hold fundraiser this month 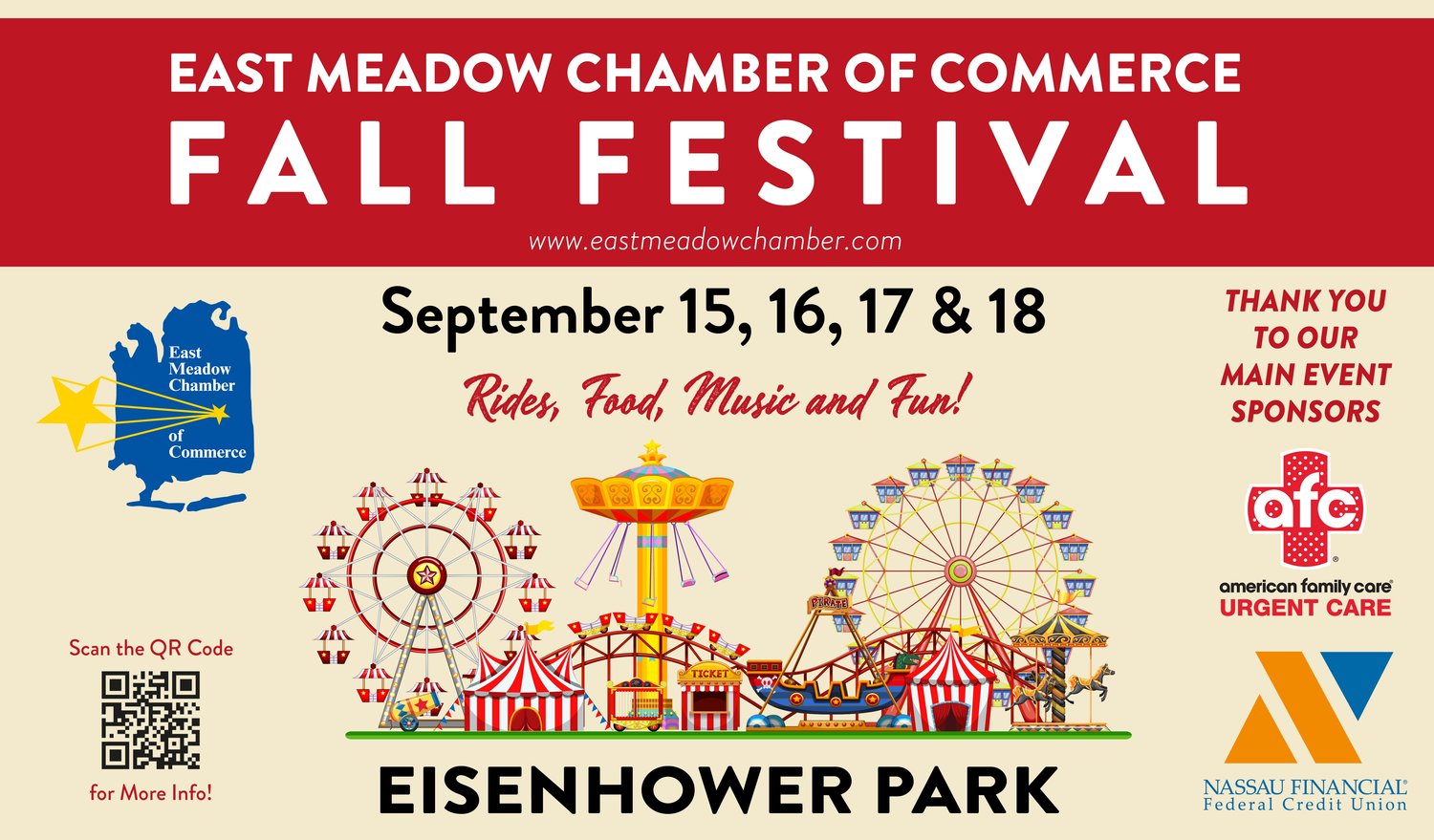 The East Meadow Chamber of Commerce is getting ready to hold its first fall festival for residents in Eisenhower Park, Sept. 15 to 18. There will be rides, food, crafts, entertainment, and more.
Courtesy Lyndsey Gallagher
By Mallory Wilson

ust in time for the fall weather and back to school season, the East Meadow Chamber of Commerce will host its inaugural fall festival in Eisenhower Park Field 2.

The four-day festival, from Sept. 15 to 18, will feature rides, games, food, entertainment and more.

“Since before I was chamber president, I had always said that East Meadow needed something like this,” Mitchell Allen, the developer and senior chairperson for the event, said. “But we never really had the town street to do something like this like other areas do.”

Allen, who was chamber president in 2015, said the idea to host the festival in the park came about four years ago.

“I remember him calling me years ago with this idea,” current Chamber President Richie Krug Jr. said. “He spent countless hours talking and collaborating with other chambers who’ve done the same thing to make sure ours was the best it could possibly be.”

Eisenhower Park, East Meadow’s big backyard, was the ideal location to hold the festival, so Allen went to work speaking to the right people. He got the thumbs up from then-County Executive Laura Curran about two and half years ago.

“Well, two and half years ago, everyone’s life changed,” he said of the Covid-19 pandemic. “And the world went on hold.”

The plan for the upcoming festival has been in the works for about a year. The date for the festival was picked earlier this year.

“We’ve been working feverishly to make this happen,” he added.

For all four days, there will be rides, but on the Saturday and Sunday dates, there will be live music, face painting, balloonists, and magic shows. There will be food trucks as well as dozens of arts and crafts booths. Chamber members will have booths set up as well.

All of the performing musicians are local to the island and are donating their time, said Debbie Kirsh, entertainment chair. The N95 band, a group made up of workers from Nassau University Medical Center, will be performing as well.

“I was happily surprised with the amount of people that wanted to donate their time,” Kirsh said. “We reached out through the chamber members and we also put something out on Facebook, and we got a lot of responses.”

Everything is free at the festival except the rides and food, Allen said. The chamber partnered with a few organizations in East Meadow such as the Parent Teacher Association, the East Meadow Baseball and Softball Association, NUMC, and Kiwanis, to sell tickets. For every ticket sold, the organization gets a portion of the profit, the rest will be going right back into East Meadow for projects.

This way, Allen said, everyone in the community benefits.

“Every dollar that’s generated goes back into the community, not one dollar is being kept by the Chamber of Commerce in any way, shape, or form,” he said. “It’s all going to our membership.”

At the end of the day, it’s all about the community, Allen said. “It’s really about the business community,” he said. “The entire community receives the benefit of the function.”

Allen said the chamber is optimistic the festival will be a huge success, and if it is, they intend to do it bigger and better next year.

“I hope we have a lot of kids there having fun,” he said. “If we could bring everybody together and have some fun, some good times and some music and social togetherness, I think that’s a good move, especially after the last two and a half years.”