From walking to running 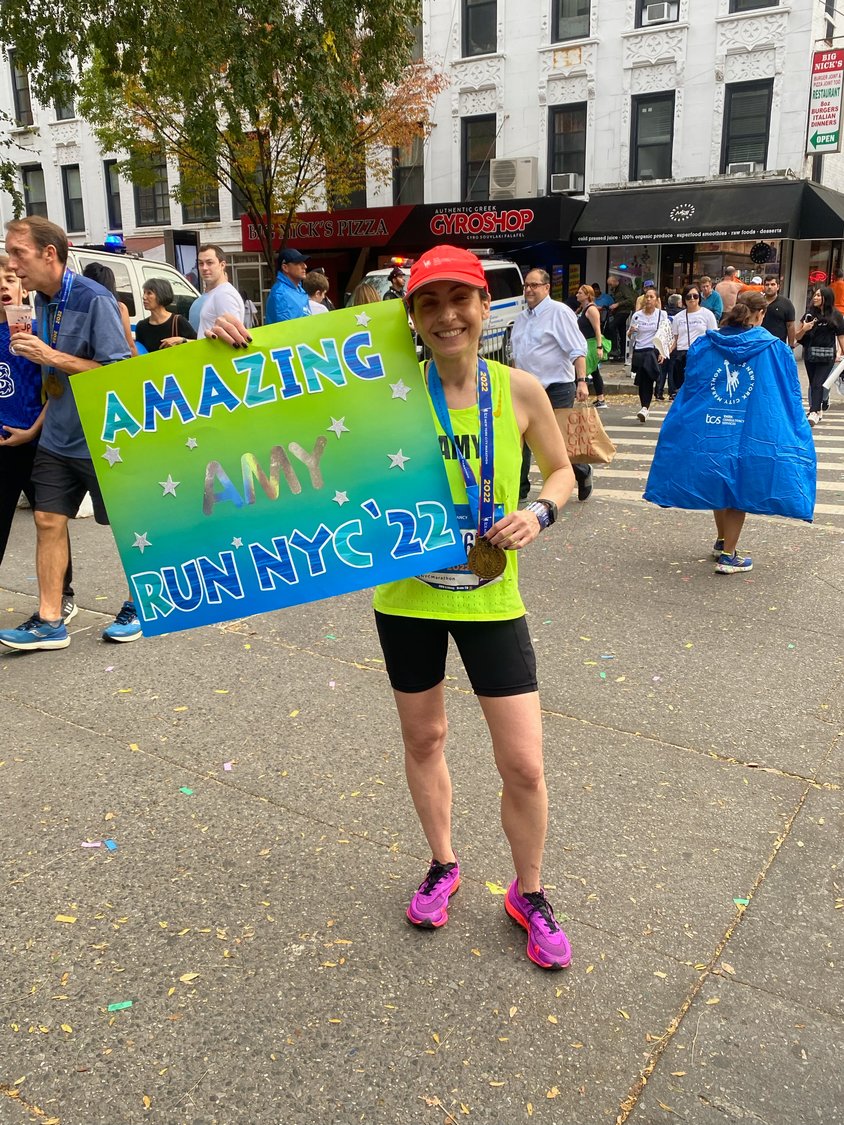 Amy Gruenhut spent three months in Mount Sinai Hospital in Manhattan in the beginning of the year. Slowly but surely she started to walk and run again, and last Sunday she finished the New York City Marathon.
Courtesy Amy Gruenhut 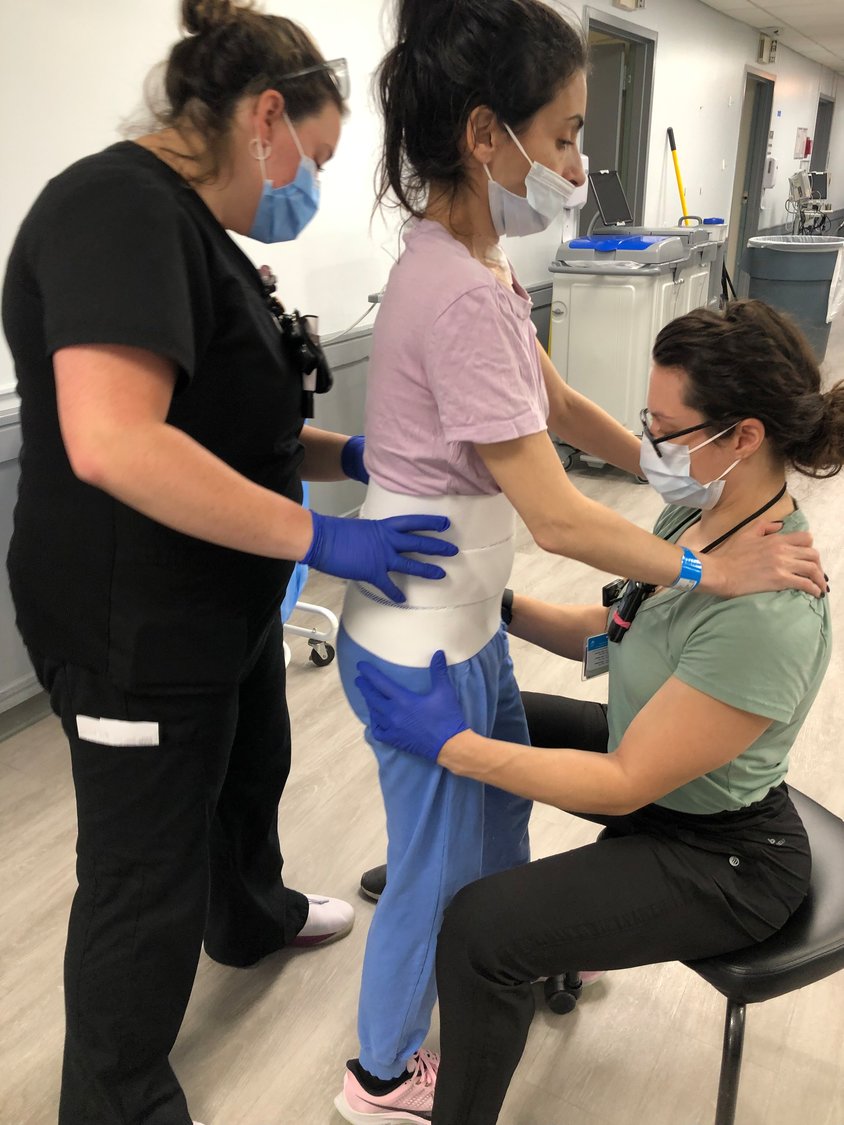 After being diagnosed with viral encephalitis in January 2021, Gruenhut had to relearn how to walk, talk and eat.
Courtesy Amy Gruenhut
Previous Next
By Mallory Wilson

East Meadow native Amy Gruenhut long despised running, but surprisingly ran her first New York City Marathon on Nov. 7, 2021. She started enjoying running in 2019, and ran her first half marathon in April of that year after a friend forced her to sign up.

She continued running throughout the pandemic as a way to stay healthy and positive. In total, she ran 20 in-person and virtual races in 2020 alone. So when it came time to sign up for the 2021 marathon, she was ready.

“I told my friends — and I’ve never used this statement before about anything in my life — that I’ve never been so ready for something before in my life as I am for this marathon,” Gruenhut, 43, recounted. “I trained so hard, I was really focused, and I absorbed any and all information from coaches, friends who are great runners, movies about running, to reading about famous Nike runner (Eliud) Kipchoge. I was like a sponge.”

What she wasn’t ready for was being admitted to the hospital on Jan. 7, 2022, exactly two months after she ran the marathon, with viral encephalitis.

Viral encephalitis is an inflammation of the brain caused by a virus or infection, or autoimmune condition, and is relatively rare. The most serious potential complication is permanent brain damage. Gruenhut first saw symptoms in December, and felt like she had a cold she couldn’t shake.

“I think it was like an upper respiratory infection that my body just couldn’t fight, and then I caught this enterovirus and somehow, someway, it attacked my brain,” she said. “Doctors told my parents that they didn’t think I was going to survive, and somehow I made it out alive.”

She went to the hospital for her symptoms in early January, but was given fluids and told to go home to her Manhattan apartment — where she’s lived since college.

When she felt worse the next day, her parents came and took her back to the hospital. Her speech was slurring, her vision was doubled, and she felt like she was dying.

“I was really scared and nervous,” she said. “They gave me a spinal tap and from there I don’t even remember what happened.”

Following the spinal tap, Gruenhut went into a coma and didn’t wake up for about two weeks. The doctors in the neuro-intensive care unit of Mount Sinai Hospital in Manhattan treated her with intravenous immunoglobulin infusions.

“I was attached to all these machines and on the ventilator, I couldn’t speak, I couldn’t move obviously, and I had all of these doctors and nurses around me,” she explained. “I even got Covid in my coma.”

She was bedridden for eight weeks, couldn’t speak for six, and definitely couldn’t walk.

“I had to use a double-sided laminated card and would point to letters to spell out words and it was exhausting,” she said. “My arm hurt at the end of the day because I was trying to spell out every word to get my thoughts across and explain how I felt.”

When doctors took her off the ventilator, they had to perform a tracheostomy, a surgically created hole in her windpipe that allowed her to breath.

For two months, Gruenhut was a patient at Mount Sinai and couldn’t do much herself. She was eventually able to go to the hospital’s acute rehabilitation center to learn how to walk again. When she was discharged in March, she walked with a cane. She then spent time at an outpatient rehab center on Long Island. Her only lingering symptom is nerve damage in her tongue.

“I was so weak I had to move back to my parents’ house in East Meadow,” she said. “The physical therapy, the occupational therapy, and the speech therapy was great. I didn’t think it was going to be a full-time commitment to get better, but it was.”

To get back in shape, she started walking with her parents’ dog, a 4-pound tiny Maltipoo, and would walk more and more each day. Eventually, she found herself walking with the Long Island branch of Achilles, an international organization which empowers people with disabilities to participate in mainstream running events. With them, she started running again.

“They’re amazing,” she said. “With my guides I ran my first race in June, a 5K in Eisenhower Park.”

She started running 5Ks pretty frequently in Eisenhower as part of her rehab routine. “It was like a weekly activity to get better, and I was like, this is in my backyard,” she joked. “But it really was part of my rehab routine, every week, I would do it.”

The journey back to last Sunday’s New York City Marathon was literally one foot in front of the other, and Gruenhut had a mix of feelings about her return.

“I’m totally excited nervous,” she said. “I want to embrace the experience. It’s so fun, and you feel like a celebrity running through the streets of the five boroughs.

“This marathon is a rebirth in a way. Some people are not as fortunate as me, somehow, some way, my life was saved, and I got another chance to live again and run again.”

The race last Sunday was unseasonably warm and humid and not ideal running conditions by any means. There were 50,000 people who ran through the five boroughs starting in Staten Island and ending in Central Park. Not everyone crossed the finish line.