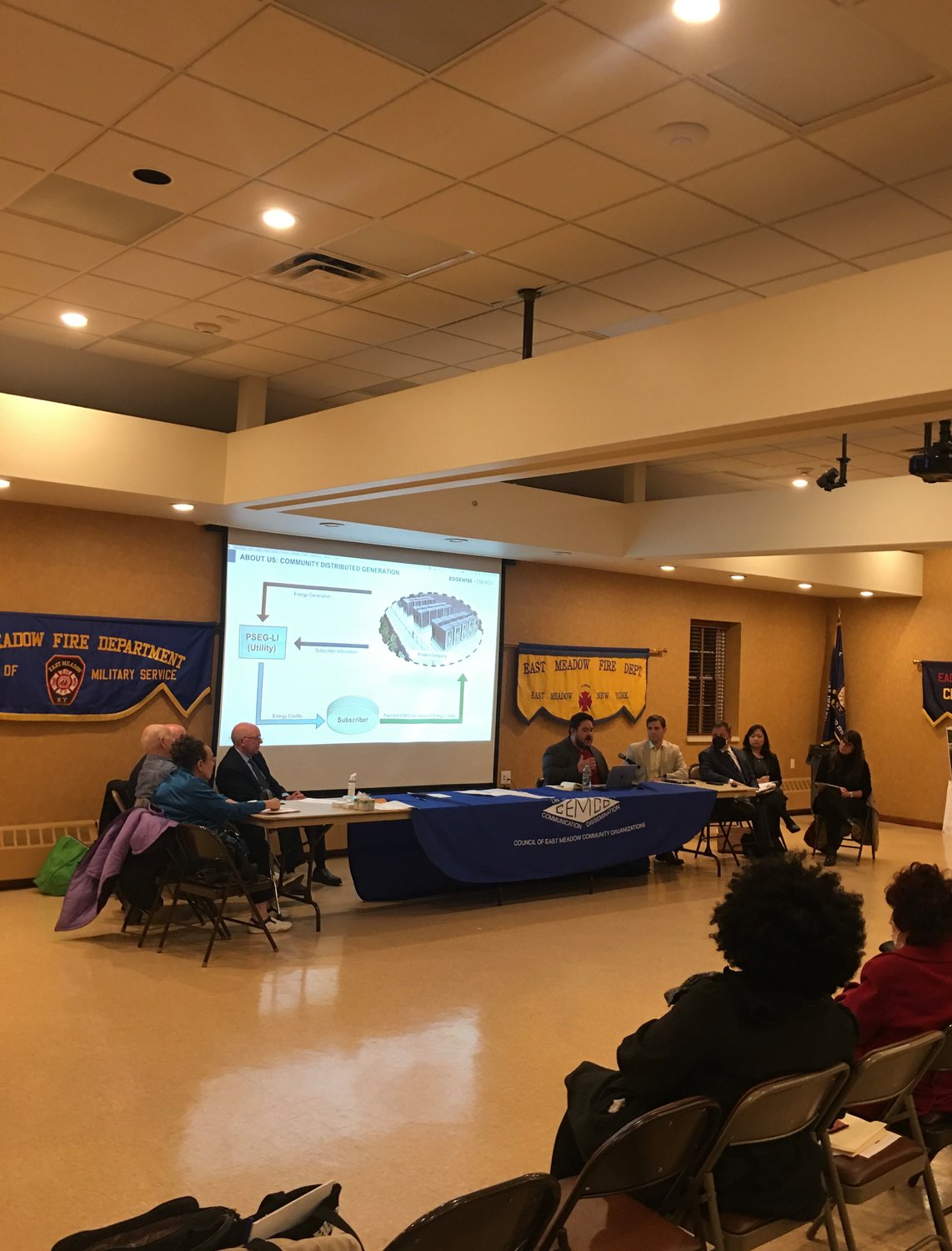 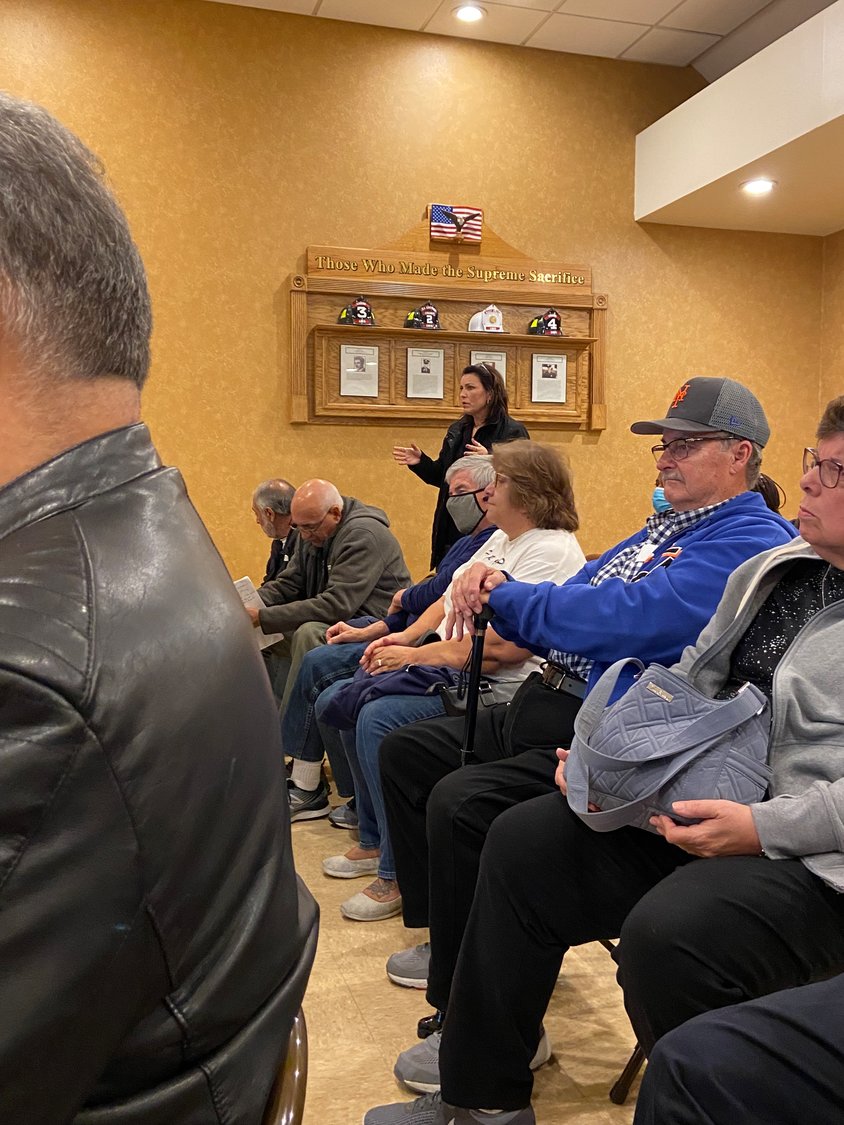 Tracy Pulice, an East Meadow resident, asked questions at the end of the presentation.
Mallory Wilson/Herald
Previous Next

were to happen to this pod, it would just destroy us. We’re too congested here.”
Helen Meittinis, Community Association of Stewart Avenue
By Mallory Wilson

A new type of green energy could be coming to East Meadow. Edgewise Energy, a Long Island-based energy equipment and solutions company and Bloom Energy, a California-based green energy company, presented information supporting the idea of green-energy servers to the community on Nov. 4 at the Council of East Meadow Community Organizations meeting.

Residents filled the second floor room of East Meadow Fire Department headquarters to learn what was being proposed and to share their thoughts too. The East and West Coast companies would like to implement fuel cells on concrete pads and associated underground electrical, gas and water services. The fuel cells use natural gas to generate electricity that would be sent to the grid.

There is a residential community on the south end of the property line, which Helen Meittinis, of Salisbury, said is a concern.

“This is just not going to be a good thing for us,” said Meittinis, a member of the Community Association of Stewart Avenue. “If something were to happen to this pod, it would just destroy us. We’re too congested here. Maybe if it was in another, area people would be more open to it.”

Edgewise, which was founded in 2015, would develop the project. Bloom Energy, the  applicant, would seek a special exemption from the town to become a public utility in order to complete this project.

The project is being funded by 100 percent direct private investment, Sammy Chu, CEO of Edgewise Energy, said. There would be economic benefits that would come with this project, he added.  Edgewise Energy would make a $10,000 annual donation to East Meadow with guidance from CEMCO.

Bloom Energy wants to use Community Distributed Generation to provide electricity to subscribers for 10 percent less than what they would typically get it for. CDG allows for an electrical production facility, such as a Bloom Energy site, to share benefits through a subscription with residential and business participants who are unable to use solar.

“There are no fees, there are no long-term commitments, and there is installation at the residence itself,” Chu said. “This is a credit transaction that gets placed on a bill, and you are still connected to the PSEG-LI grid. You’re simply purchasing credits for energy for 10 percent less that are also much cleaner.”

Seven hundred green energy sites across the world, of which 24 are Long Island locations, use Bloom Energy, including at a Stop & Shop in Amityville, Long Island University and a Home Depot in Setauket.

“You’ve probably passed these without knowing,” Chu said. “...We showed you these to show you that these technologies have been used safely in close proximities to residential areas.”

According to Chu, the project would eliminate annually roughly 28 million pounds of carbon dioxide. It would also eliminate “virtually all” nitrogen oxide and sulfur dioxide emissions, which is the equivalent to 1.4 million gallons of gasoline consumed. And roughly a million gallons of water would be saved.

Chu addressed certain community concerns that were previously brought to him by Joe Parisi, president of CEMCO, when they originally met on Sept. 13. The fuel cells would be 8 feet tall, with a 7-foot fence surrounding it, and the perimeter fence would be 6 feet high, making the site’s curb appeal objectionable to a number of residents. Chu said that a fence would be put up and foliage added, which would include some colorful perennials.

But several residents remained annoyed, saying the view from their backyards would be unsightly. Alfred Amato, from Amato Law Group in Uniondale, who represents Bloom Energy, said that  much taller buildings could go up at the site without residents consent, which would create a great deal of traffic. Fuel cells would do the opposite.

Another big concern for the community is noise. Joyce He, a civil engineer from Cameron Engineering, a Long Island-based engineering firm involved in the project, shared a sound study completed at the proposed site, comparing the current noise levels at night to the noise levels of fuel cells. The study, performed from midnight to 7 a.m., studied ambient nighttime noise, measuring it from the north, south and east sides of the property lines. It found that the decibel levels would be significantly lower than the levels permitted by the town.

Tracy Pulice, East Meadow PTA Council’s community liaison, said she was concerned that her children, who are hearing impaired, would be affected by the low humming noise that the cells emit.

“Part of my role is to come down and represent our PTA, and I go back and report to our other units,” Pulice said. “This is also personal, because my house is one of those that is in this vicinity . . . If they’re talking about a certain decibel level, then I need to be aware of whether or not it will affect my children or anyone else, for that matter, that may wear hearing aids or have disabilities that it may affect.”

Chu and the engineers said they would look into the question.

Safety was also a concern among residents. Bloom Energy meets all national and global certification standards.

“The project has been presented to the East Meadow Fire Department as well as the Nassau County Fire Marshal,” Kristin Grillo, senior permitting specialist for Bloom Energy, said. “The project has been discussed in detail, including the operation of the systems, the emergency shut-off controls along with fire truck access to the site in case of any sort of emergency… they have been reviewed and our current site plan has been approved.”

The site would be monitored 24/7 by Bloom Energy’s remote-monitoring center. Additionally, the system is equipped with internal safety mechanisms to detect any problems. Four CCTV cameras would be installed to ensure security.

The cells are resilient, having survived hurricanes, earthquakes, fires and even a forklift falling on top of the systems. In all cases, the system shut off.

Many residents said they were skeptical about the project. Tempers flared, with some yelling at Amato and Chu when they attempted to provide answers.

But other residents were interested in the proposal. “I would be in favor of the project,” Warren Kalmenson, of East Meadow, said. “It’s cleaner energy so why not? I believe in solar energy and even wind power. Anything to clean the environment is good.”

The next step is for the project to be submitted to the Town of Hempstead Board of Zoning Appeals.

“Residents have the opportunity to submit their comments to the BZA,” Parisi said,  “and [they can say] how they feel about the project, either in favor or not.”

The BZA hearing date had been set for Nov. 10, but there was a recommendation that it be  adjourned until Dec. 8 to allow for the public to express their concerns.

If the plan goes through, the project will break ground in March next year and have the servers fully functional by August.