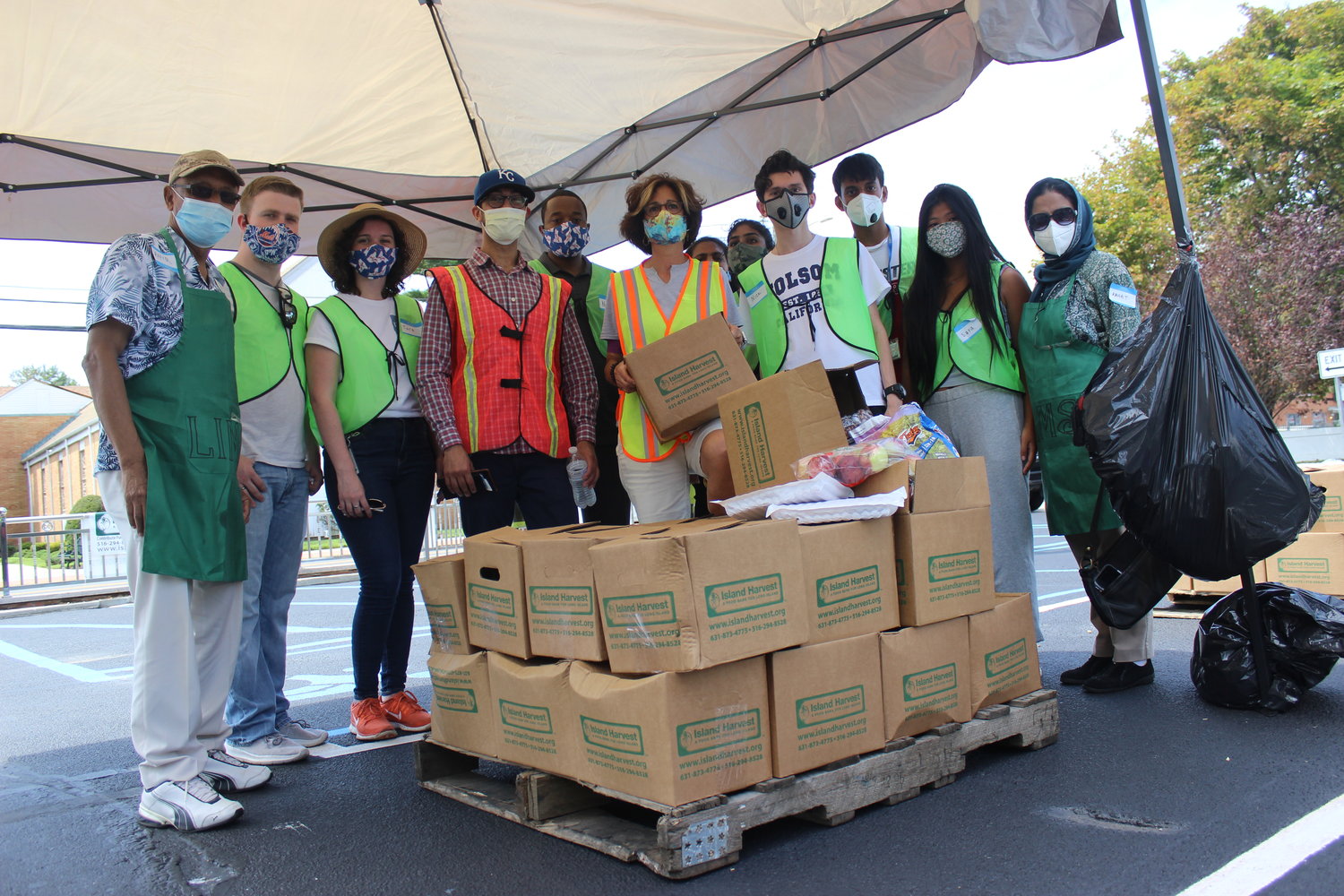 Volunteers from Island Harvest and the Long Island Muslim Society, in East Meadow, handed out boxes of food to roughly 150 local families during a joint food distribution event at the mosque last Saturday.
BRIAN STIEGLITZ/HERALD 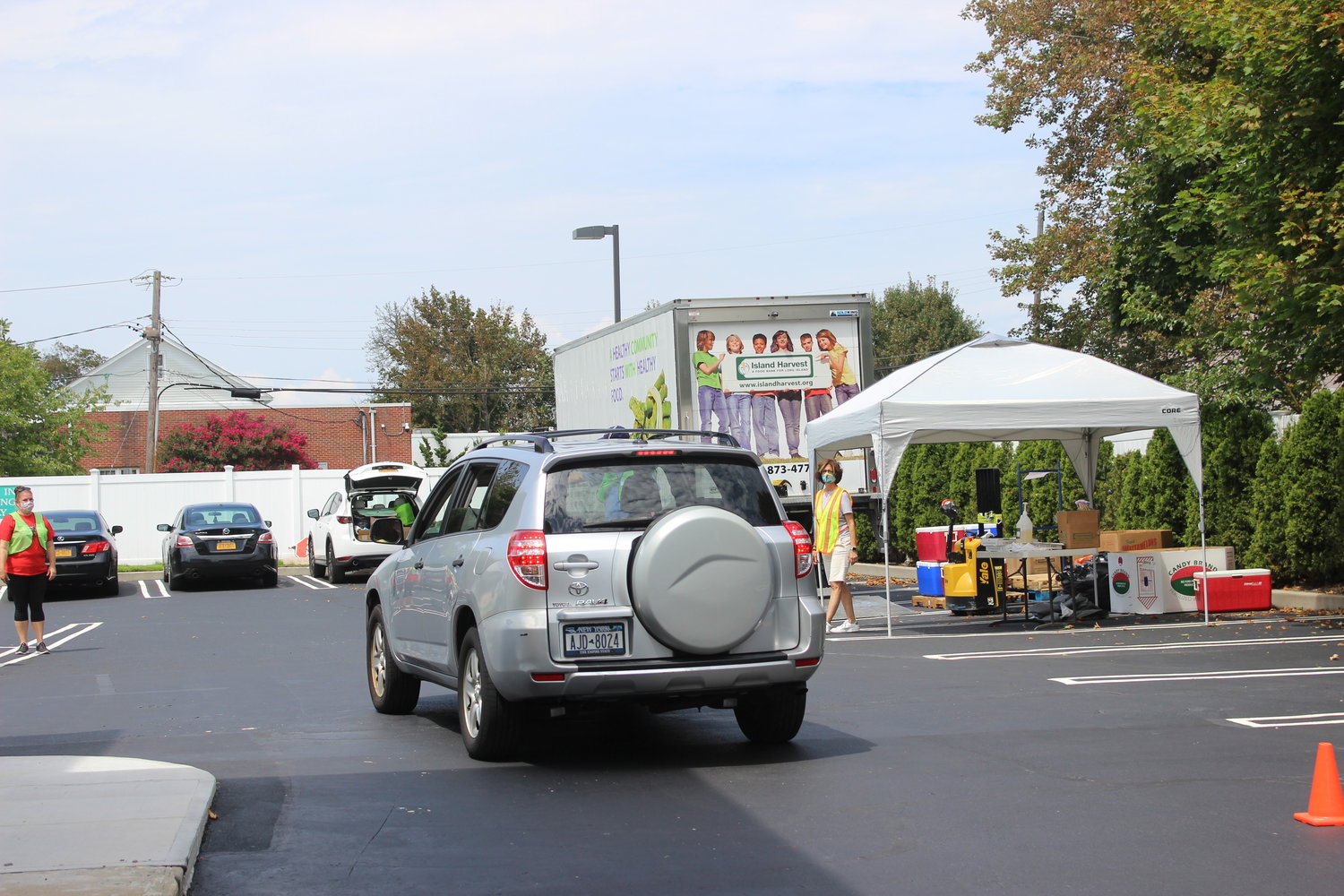 Randi Shubin Dresner, the president and chief executive officer of Island Harvest, lives in East Meadow, and said she was thrilled to join the mosque to help her neighbors.
BRIAN STIEGLITZ/HERALD 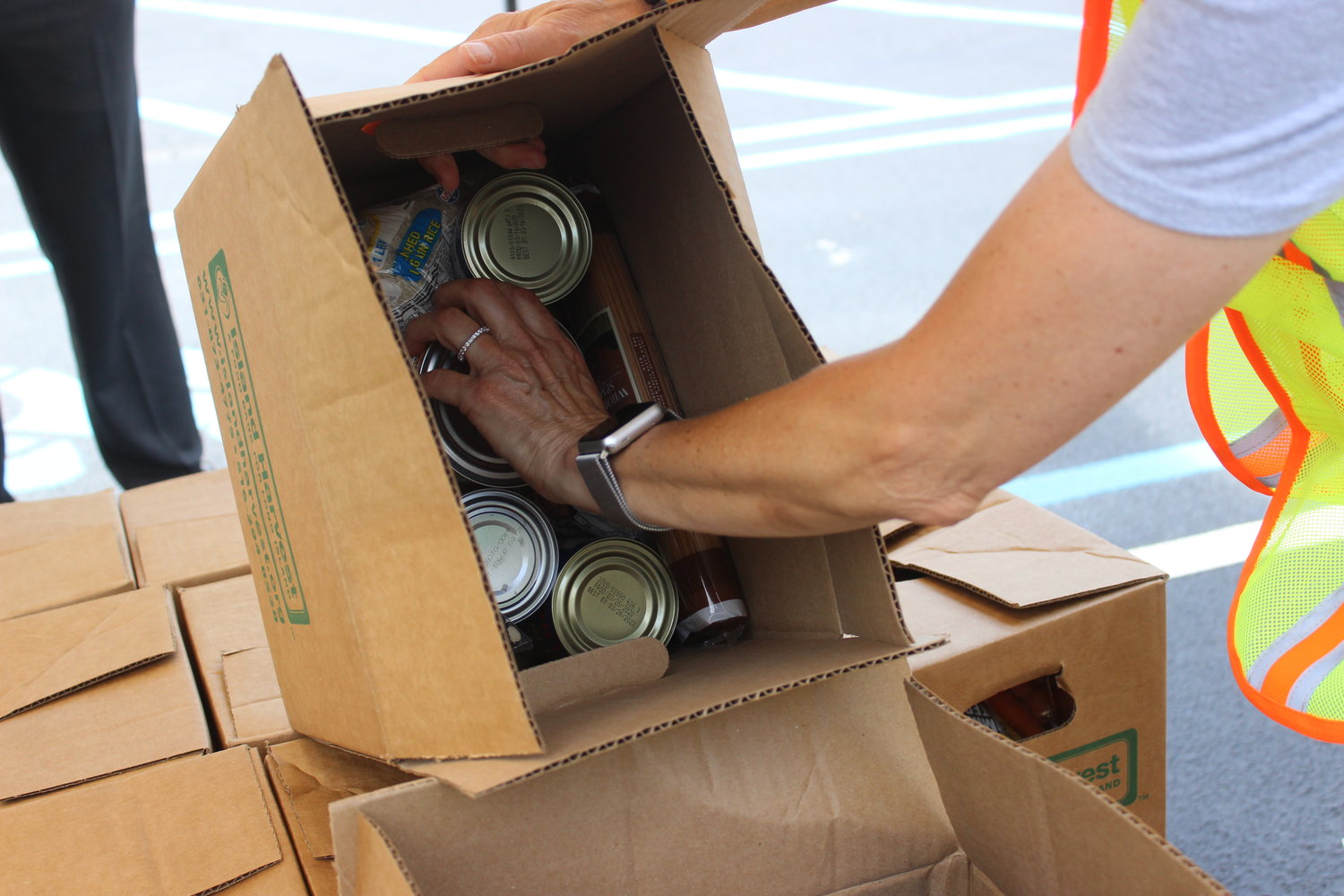 Each family was given two boxes of non-perishable items and packages of meat and cheese — enough food to last four days.
BRIAN STIEGLITZ/HERALD
Previous Next
A role model in worship during pandemic

The Long Island Muslim Society, in East Meadow, was the first of many institutions to shut down because of the coronavirus pandemic: It stopped offering in-person services in mid-February, before Gov. Andrew Cuomo’s mandatory shutdowns in March.

According to Rahat Hossain, a board member, Islamic worshippers at the LIMS typically maintain contact while praying by standing shoulder to shoulder. They also kneel on a carpet, which would have had to be shampooed after each use — five times a day.

All services were held on Zoom and live-streamed on YouTube. The LIMS reopened on July 20, having installed a tarp over the carpet that members sprayed with disinfectant in between prayers. It also hired a cleaning company called Enviroshield to disinfect the entire building twice a month.

When they enter the mosque, worshippers are required to fill out contact tracing surveys, have their temperature taken and sanitize their hands. They stand on markers six feet apart. Capacity has been reduced from 126 to 60. Women, children and those over 65 are advised to stay home and worship over Zoom or a YouTube live-stream. No parishioners have been diagnosed with Covid-19 to date, Hossain said.

According to LIMS President Hussein Ahmed, over the past three years, Muslim families from across Long Island, Queens, Brooklyn and the Bronx have moved to East Meadow and the surrounding area to join the mosque. He attributed the spike in membership to its educational programs for children and adults, which it continues to offer via Zoom. Over the past three months, a series of courses have focused on the coronavirus, women’s health and breast cancer awareness.

Before the pandemic, the mosque offered “open-door visits” geared toward non-Muslims in the community, including classes in the East Meadow School District.

“People have misconceptions about Islam,” Ahmed said. “They think it’s about fighting and war … we want to give them the bigger picture of what Islam really is.”

Volunteers spent a sunny afternoon at the Long Island Muslim Society in East Meadow last Saturday, as Island Harvest and State Sen. Kevin Thomas, a Democrat from Levittown, joined the mosque in handing out boxes of food to roughly 150 local families.

Each family was given two boxes of non-perishable items and packages of meat and cheese — enough food to last four days. Also on hand were representatives of the U.S. Census Bureau to ensure that residents are counted in this year’s census.

Rahat Hossain, an LIMS board member, said that Thomas had reached out to the mosque with the idea of holding the food drive. Randi Shubin Dresner, the president and chief executive officer of Island Harvest, lives in East Meadow, and said she was thrilled to join the mosque to help their neighbors.

A number of congregants and their loved ones are immigrants, Hossain said, explaining that immigrant families in need of assistance may not always know where to find it because of factors like language barriers and the dietary restrictions of their religion. “They might just be shy about seeking resources, too,” she said. “This is what we do to help them.”

The event was one of many community food distributions that Island Harvest has offered throughout the coronavirus pandemic, which forced the food bank to “completely transform” its operations beginning March 9, Shubin Dresner said. It was receiving fewer donations than usual, and stores had less food on the shelves, but there was also a greater need for its services. “So it was very difficult at first,” she added.

So Island Harvest changed its model by using its funds to purchase food and create emergency meal boxes like the ones it delivered last Saturday. Each box has enough food to feed a family of four for four days and, so far, the food bank has assembled roughly 75,000 boxes.

Island Harvest has also called roughly 12,000 residents to help them sign up for benefits from the Supplemental Nutritional Assistance Program. The number of Nassau County residents seeking such benefits climbed steadily during the pandemic, with 3,786 applying in April — more than tripling the 1,095 who applied in April 2019.

“We’ve done distributions helping anywhere from 150 people to the 4,000 people we helped at Nassau Coliseum,” Shubin Dresner said, referring to an event the food bank hosted jointly with Nassau County on July 2. Deemed Nassau’s largest food distribution event, according to County Executive Laura Curran, it was made possible by a $1 million county investment in local food banks.

In addition to assistance from the county, Island Harvest has also received funding from federal and state programs like the U.S. Department of Agriculture’s Commodity Supplemental Food Program, which provides low-income seniors with 32 pounds of food each month for three years.

In another USDA program, dubbed the Coronavirus Food Assistance Program, Island Harvest partnered with dairy farmers who lost school districts as customers this spring, and had to dump all the milk they collected.

“We never stopped working,” Shubin Dresner said. “Up until a month ago, our staff was coming in five to seven days a week. We’re just catching our breath now.”

The number of staffers at the food bank increased to 80, in contrast to the 47 who were working before the pandemic.

Many philanthropic agencies, including Island Harvest, began the pandemic by losing volunteers who had their own personal and financial struggles, Shubin Dresner said. But Island Harvest, she said, gained volunteers, and finished July with some 1,300.

“To see people lining up for food at these distributions is always difficult,” she said. Before the start of each event, there is an orientation during which she tells the volunteers that they may see a lot of people whom they wouldn’t expect to see seeking help. They may pull up in expensive cars and look wealthy, Shubin Dresner explained, but they may have lost their jobs or had to close their businesses.

“This is a no-judgment zone,” she said. “We treat them all with the same respect, greet them the same way and thank them for coming.”

She said she hoped to continue some of the food bank’s recent efforts beyond the pandemic, hosting more community distribution events, doing more fieldwork and donating more boxes of food.