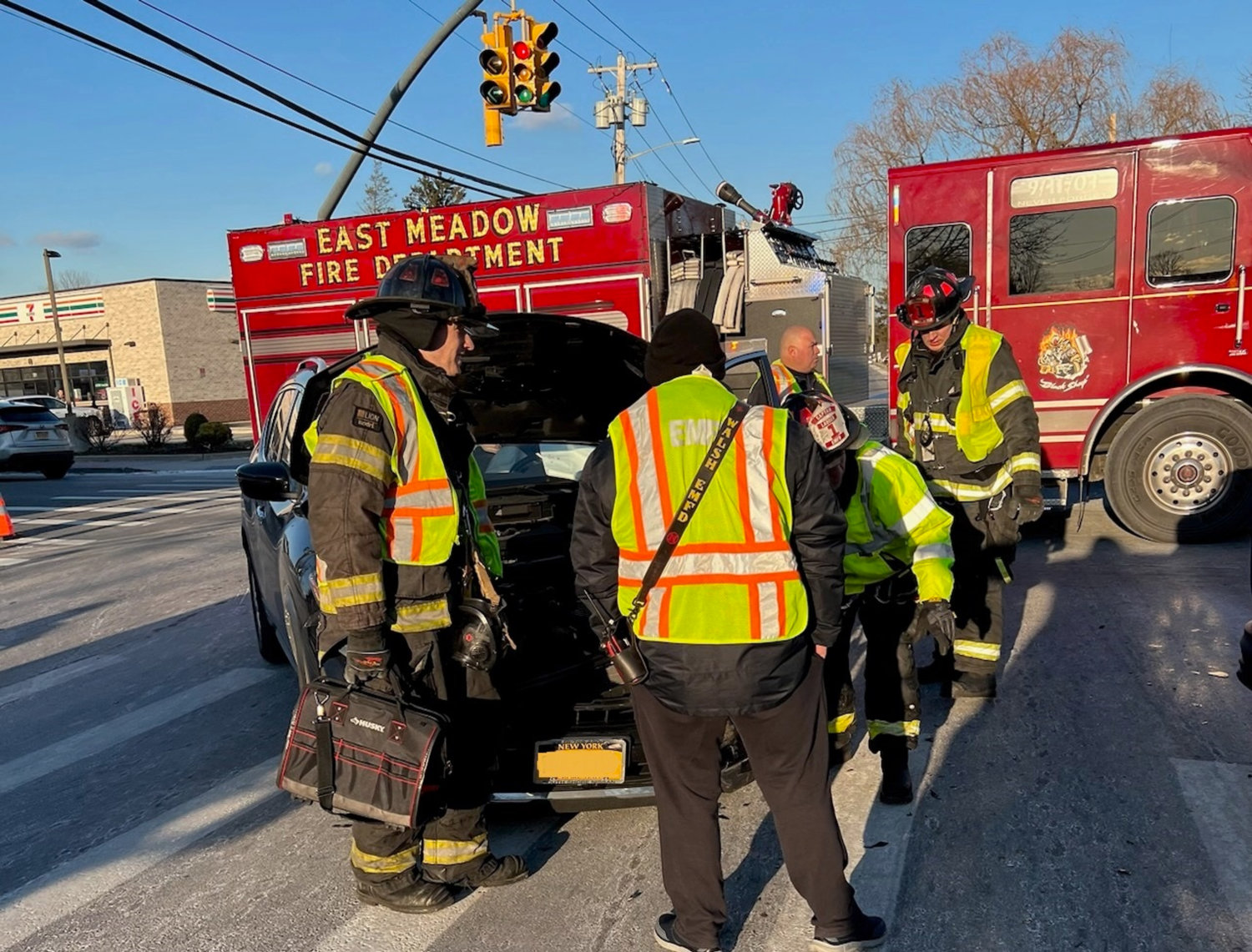 East Meadow Volunteers operated on a motor vehicle during the bitter blast of frigid temperatures during the holiday season.
Courtesy John O'Brien
A message of thanks from Chief Cheswick

I need to take a moment to let you know how proud I am of the assistant chiefs, officers, and members of the East Meadow Fire Department as this holiday weekend comes to a close.

I’m very proud of our FD everyday, but this past weekend truly emphasizes the sacrifices, that our volunteers make everyday. You see, this Christmas Eve and Christmas Day, turned out to be one of the busiest weekends our department has had in years. Our volunteer firefighters and EMS members were called away from their families, friends, and loved ones, to serve the residents of the East Meadow Fire District numerous times. There was roughly one call every two and a half hours for two days straight, equalling 18 calls in total.

As Chief of Department, I am so humbled by their dedication to helping others in need.  Our EMFD members responded to help the residents of East Meadow, parts of Westbury, and Levittown.

In the 48 hours making up Christmas Eve, Christmas Day, and Hanukkah, there were seven automatic fire alarm activations, one call for a strong odor of natural gas, one oil burner fire, two broken water pipes — one of which our members stayed to coordinate with the Red Cross, as this family could not remain in the structure, and now needed shelter. There was also one motor vehicle accident and six calls for our ambulances for emergency medical events.

So, 18 times our members were taken away from their warm houses or warm beds, during the extreme cold weather, taken away from opening presents with their families, or taken from a holiday meal with family and loved ones. Eighteen times that these selfless volunteers, put the needs of the residents of the East Meadow Fire District above their own.

They swore an oath to help their neighbors when they joined the EMFD, and to do so 24/7 to the best of their ability. I have to say they proved that they stand by that oath this weekend for sure. I am incredibly proud of the volunteers of the EMFD, and I wanted to express that pride publicly. These men and women are really “A Cut Above” and I hope you, the residents of our district, are proud of them too.

During the holiday season, while everyone was enjoying family time, a break from work, and some good food, the East Meadow Fire Department rushed to answer a record number of calls. The volunteer fire department received 18 calls in two days, and the members didn’t hesitate to leave their holiday plans to make sure others were safe.

That’s what being part of a volunteer organization is all about, and once you get the itch to help someone, you might not be able to stop.

Chief Peter Cheswick first got involved with the EMFD when he was 15-years-old as a member of the EMFD’s Junior Fire Company. He then joined officially at the age of 18, in June 1993.

“My cousin’s husband was a city fireman and the love that he had for it made me join the juniors,” Cheswick said. “After I joined the juniors, I was hooked.”

Cheswick joined East Meadow Ladder Company 2, which he said that not having a fear of heights definitely helped in his decision. Ladder Company 2 is just one of two ladder companies that the fire department has. There are also four engine companies, and one rescue company.

Engine companies typically bring water to the fire, Cheswick explained. Ladder companies are responsible for more of the search and rescue aspect of a call. The rescue company performs medical emergencies.

“A lot of the times we go in there before there is a hose line to find the fire and help lead the engine company to where the fire is,” Cheswick explained of ladder companies. “We’ll do ventilation to make the conditions better for the firefighters.”

Anyone can join the East Meadow Fire Department, and right now their enrollment is at an all time low. This isn’t a unique issue, it’s country-wide.

“The amount of people that are volunteer right now, we are at a low,” the chief explained. “And it’s getting harder and harder to get people to volunteer. Economically, people need to support their families, so how much can they really give back to the community.

“A lot of our members including myself are working two jobs, I have a full time job and a part time job — it’s a lot more of a struggle to balance than it was 20, 30, 40 years ago.”

There are a lot of benefits to joining the fire department, especially for young people just starting out. For kids under 18, there is a whole juniors fire department that shows them the ropes of all the different companies. They can even earn the opportunity to attend Camp Fahrenheit 516, a week-long camp held at the Nassau County Fire Service Academy in Old Bethpage during the summer that trains them on a variety of practices they need to know to be a firefighter.

“I wish we had that when I was younger,” Cheswick said of Camp Fahrenheit. “When we’re looking for people, what a better way than showing them when they’re young and giving them good quality training.”

Through Nassau BOCES, there are EMT training courses for high school students. For college-aged kids, free tuition at Nassau Community College is available for those who volunteer at their local fire departments. All that is needed is a signed letter from the chief showing involvement within the fire district.

“Both my son and daughter took advantage of that,” Cheswick said. “And now my daughter is an EMT for New York State at Jones Beach.”

There is no experience needed, and the fire department covers any training that is needed. Other benefits to becoming a member are a small tax reduction after five years of satisfactory service available to all East Meadow firefighters and medical technicians who own a home, as well as a “Length of Service Award Program” which builds a pension-like fund for all members maturing at the age of 55.

“We’re here for people to get careers,” Cheswick said. “We have a lot of members who joined the fire department and got their careers through their experiences. City EMS, NYPD, FDNY, EMT’s are all careers people can do from their experience here.”

If you find yourself caring for others more than yourself, then the EMFD might be the right fit for you, Cheswick said. To volunteer call (516)542-4565, or visit, eastmeadowfd.com/JoinUs.php.