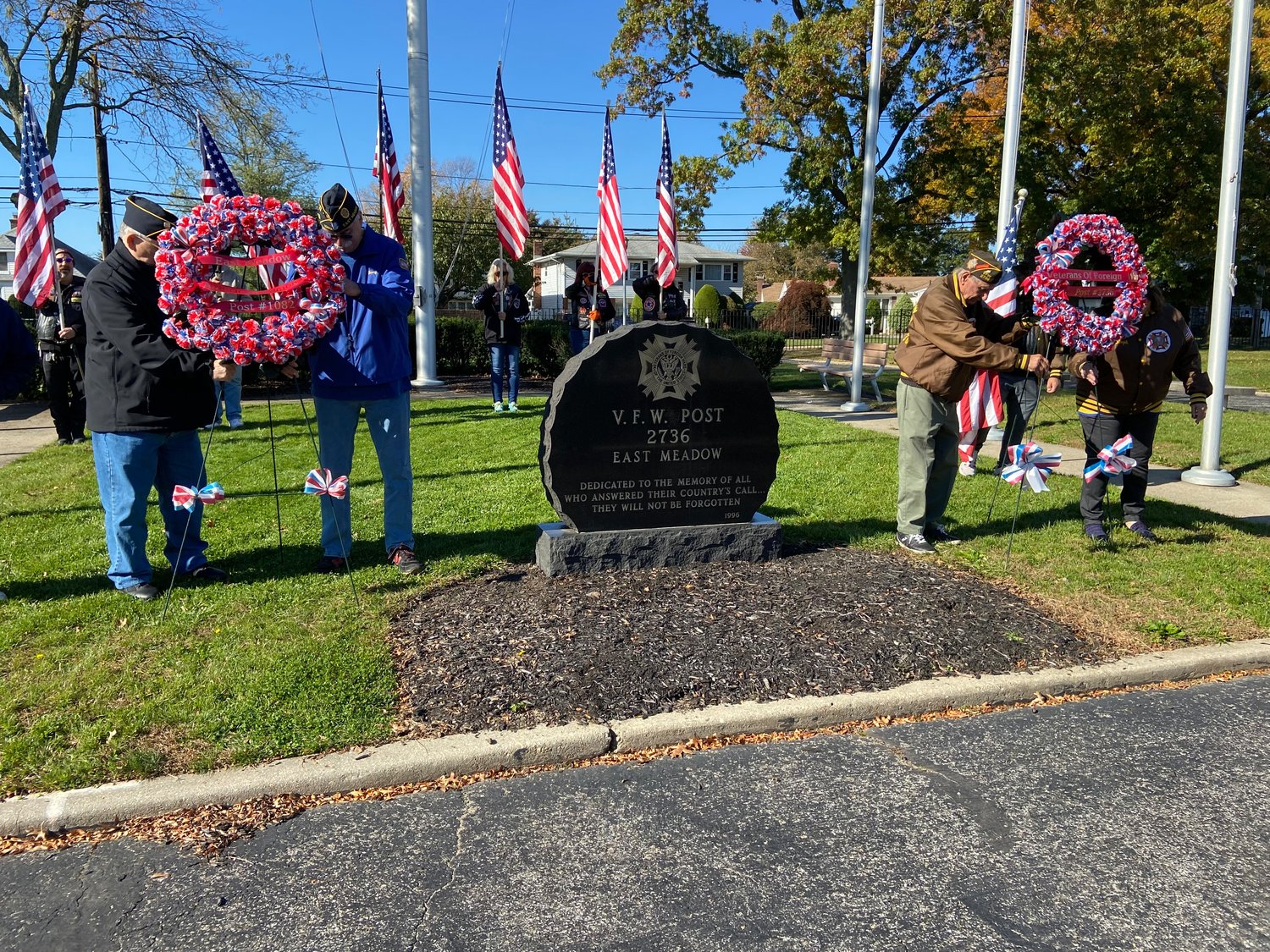 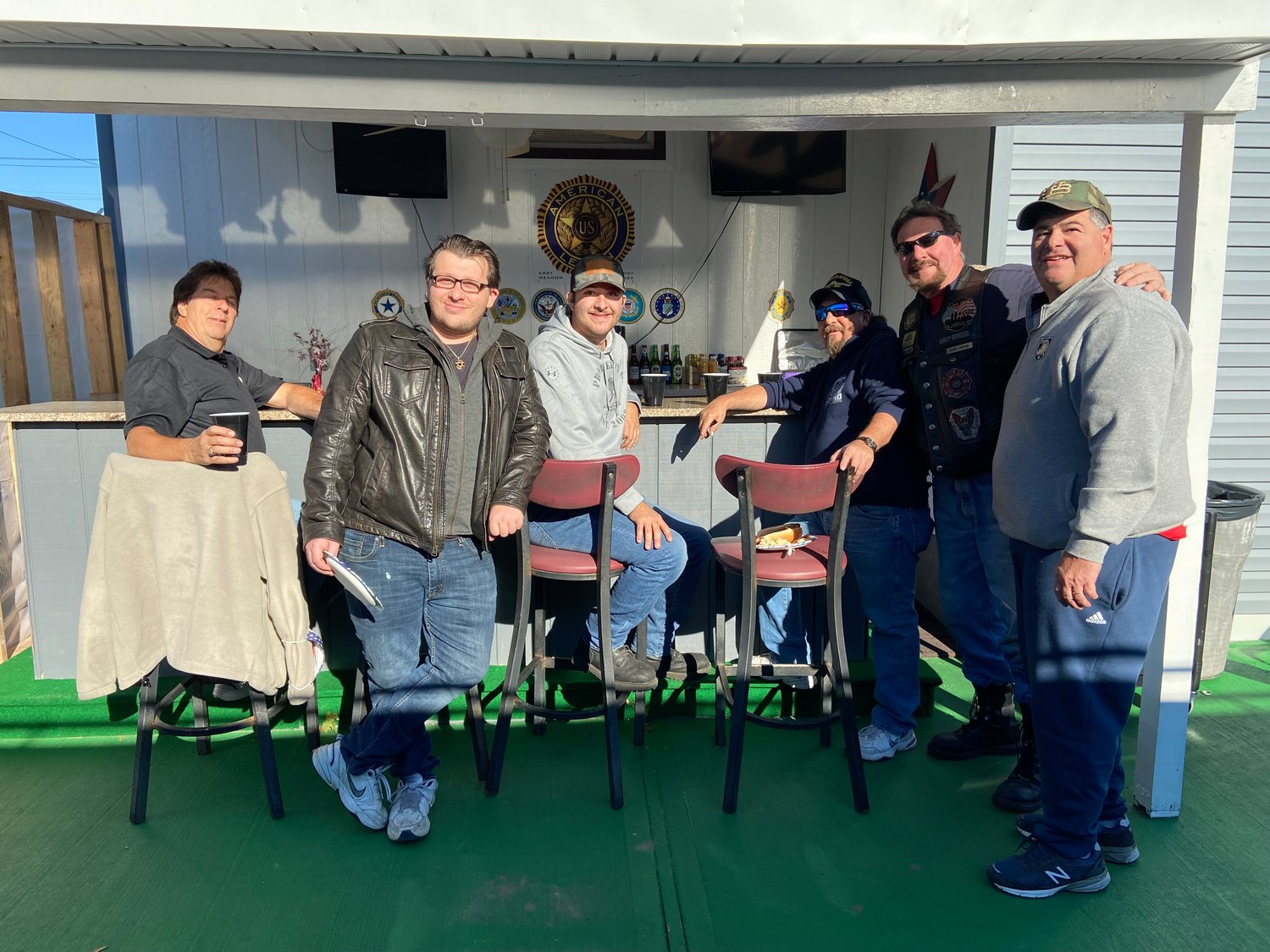 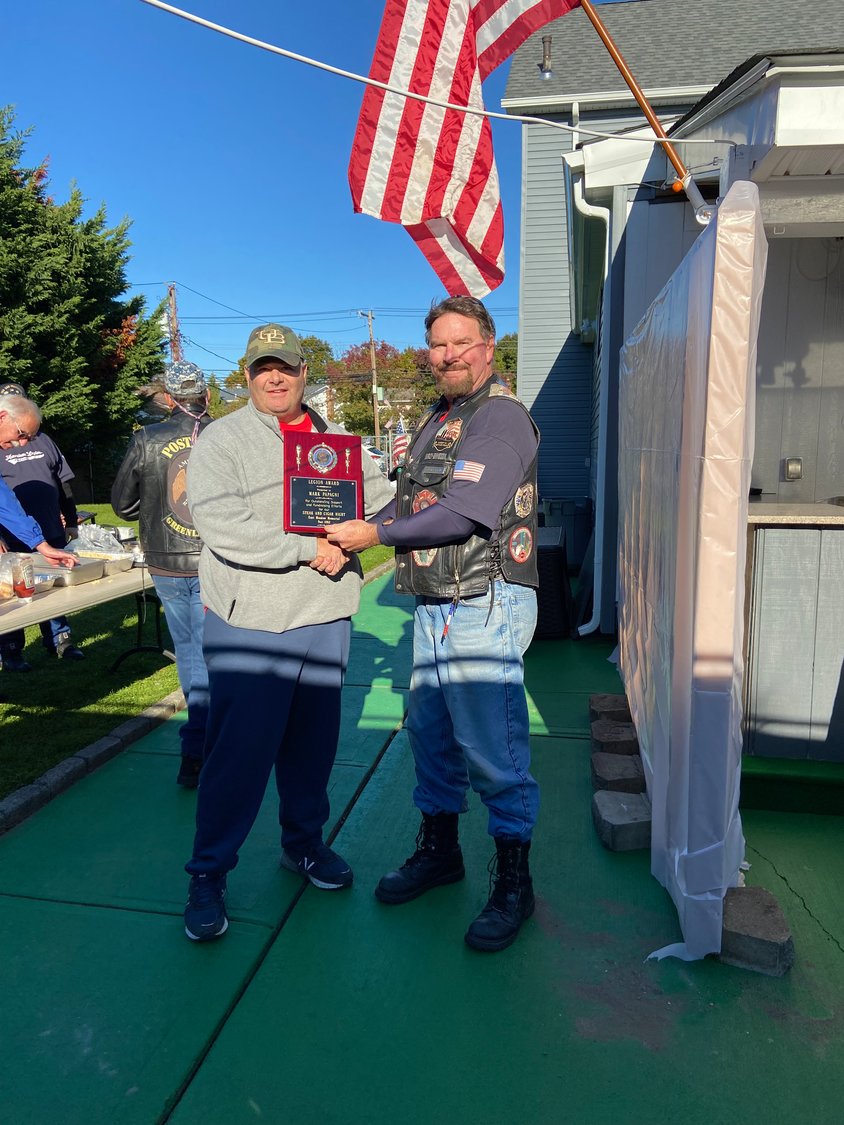 Mark Papagni was the American Legion Member of the Year.
Mallory Wilson/Herald
Previous Next
By Mallory Wilson

“On this day, pre-Veterans Day, we are commemorating the service of veterans of all wars,” Wenninger said in front of the Veterans of Foreign Wars monument in the park. “We remember how men and women set aside their civilian pursuits to serve the nation’s cause, defending the freedom of mankind and preserving our precious American heritage.”

Wenninger, who served in the Navy for six years after graduating from East Meadow High School, reminded people that there are many wars, and they are all painful.

“If there are no veterans, then you have no freedoms, and that is what is important to remember,” he said. “A country that forgets its defenders has soon forgotten itself.”

Legion members held American flags behind the monument as onlookers stood respectfully while listening to Wenninger.

Honorary Chaplain Rob Pav, an officer in the New York City chapter of the Fire Riders, spoke to the crowd. The Fire Riders is a non-profit motorcycle organization that raises money and supports organizations within the Fire Department of New York, the U.S. military and other charities.

“We beseech thee to bring blessings of understanding to the family and friends on this and other lands,” Pav said. “...Grant oh God that those closest to the fallen may mingle the pain of their losses with ennobling light of sacrifice for civilization and sacrifice for a better world for this and other generations yet born.”

Wenninger spoke to the importance of remembering veterans because of their contributions to the nation. “We believe our determination made us better warriors,” he said. “We fought with our minds and our hearts as well as our bodies.”

Members of the American Legion and East Meadow Veterans of Foreign Wars moved wreaths to place them beside the existing memorial in the park.

“Thanks to our veterans that we are free to enjoy this day,” Wenninger said, ending the ceremony. “And thanks to those who gave all and God bless us all.”

After, the car parade started at 1900 Hempstead Turnpike, across from Eisenhower Park in East Meadow. Nassau County police escorted the cars and motorcycles back to the American Legion Hall in East Meadow.

Back at the American Legion Hall, the festivities continued with food, drink, games and conversation.

Belardo served in Korea in 1999. He encourages veterans to join a VFW or American Legion post. “The camaraderie is so helpful among veterans,” Belardo said. “It’s good to talk things out, and a lot of veterans stay home. It’s good to get out and talk.”

Frank Salamino, quartermaster for the VFW Post 2736, agreed. “We need veterans because our post is dying,” he said. “Veterans are still attached to the military mentally, and it’s important to talk to others who were also in the military.” Salamino was drafted into the Army in 1965 and served in Vietnam.

In conjunction with the afternoon festivities, Wenninger had a special award for an unsuspecting legion member. “There’s something special about this hall, this post and the people here,” Wenninger said. “Every once in a while we’re blessed that someone steps out of the crowd and makes a huge difference.”

Wenninger announced that East Meadow resident Mark Papagni is Member of the Year. “He came to us this year,” Wenninger said, “and has been kicking butt for us.”

Wenninger thanked Papagni for joining and for his efforts to better the post. Because of fundraising efforts by Papagni, the post was able to pay off many of its bills, Wenninger said. “I’m kind of a humble guy. I don’t really like being in the forefront,” Papagni said. “I appreciate the opportunity to give back to the community and give back to the veterans.”

After the applause settled, the afternoon continued with hotdogs, hamburgers and music.