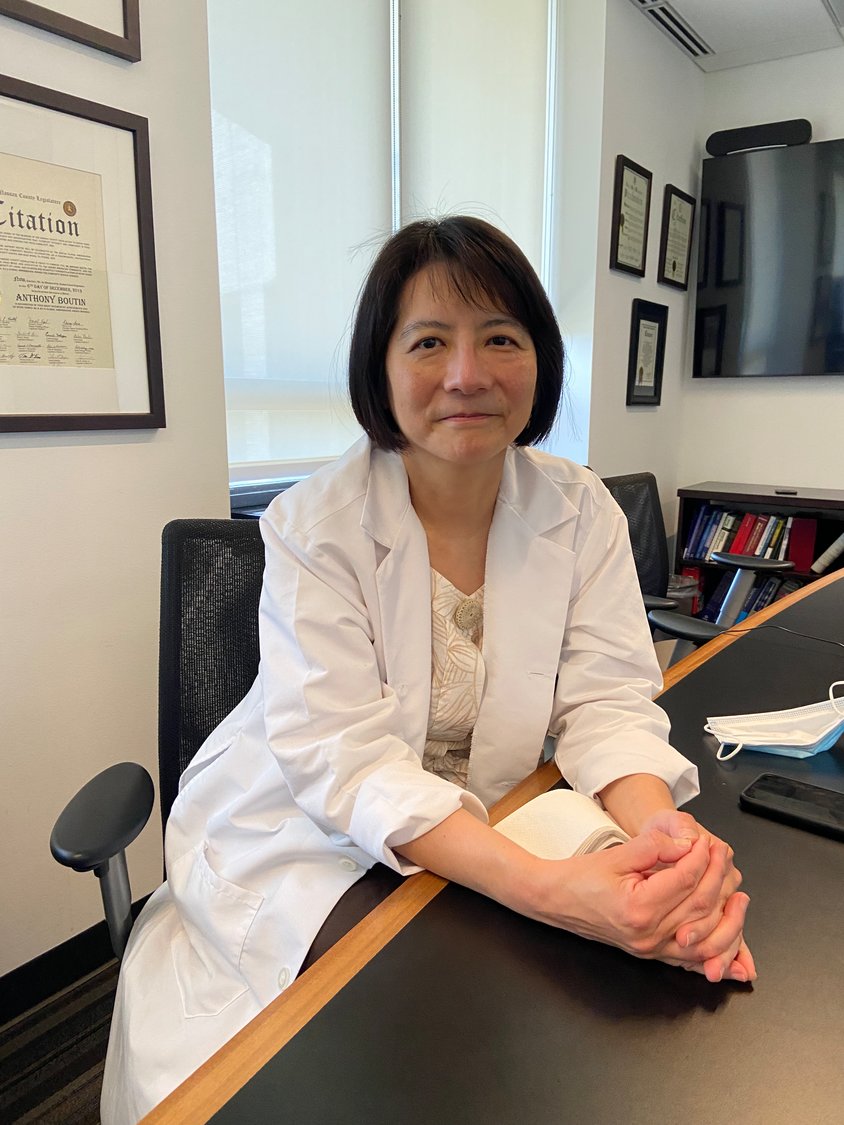 To me it’s not a gender or racial thing. It’s about being the best person for the position.”
Grace Ting, Interim Chief, NUMC
By Mallory Wilson

The Nassau University Medical Center is about to have a new chief medical officer, and she will break new ground for the hospital as its first female CMO. Grace Ting was appointed interim chief at the end of May, and is awaiting approval from the board before formally being named chief.

Ting was selected by the hospital’s CEO, Anthony Boutin, and its chairman, Matthew Bruderman. Boutin said there was no way she would not be approved by the board. “We picked a great person,” he said. “The decision is a no-brainer.”

“To me it’s not a gender or racial thing,” Ting said. “It’s about being the best person for the position.”

“She’s been the best person for a long time,” Boutin added. “She’s completely transformed after taking on this role, and she’s really stepped up.”

Ting, 61, started at NUMC in 1989 after completing her bachelor’s and medical degrees at the State University of New York Buffalo, and her residency at Manhattan’s St. Luke’s Roosevelt Hospital in internal medicine. She joined NUMC as an attending physician in emergency medicine.

She has served as the associate director for the department of emergency medicine, and during the coronavirus pandemic, she led NUMC’s hospital-wide vaccine program, which administered more than 55,000 vaccinations.

About a year ago, after Boutin moved up to be CEO and CMO, Ting went with him, as deputy CMO. “I wanted her to come with me and help me,” Boutin said. “She knows how I work.”

Ting said she was a bit nervous about taking on the new role, despite Boutin’s encouragement. “I like being incognito,” she said. “I think Dr. Boutin has a vision for this hospital, and he has his heart in it.

“We serve the community here and we have a purpose,” she added, “and that makes it hard to say no.”

Boutin called Ting the hardest-working person in this building. The two have been working together for the past 15 years.

As CMO, Ting will be responsible for overseeing all of the doctors in the hospital and anything medical-related. She checks incoming medical staffers’ credentials and makes sure they are qualified. She also receives the quality reports for the staff in the building.

Ting said that her goal is not to tell people what to do, but to help them do their jobs better. “So a lot of times, if there’s something that needs to be done, I’ll say, ‘Let me try it first,’” she said. “I’ll see how it goes, and then I’ll hand it off to someone to do what they know.”

“Dr. Grace Ting doesn’t just understand hospital operations and how to ensure we provide the best patient service, she understands and cares about our communities,” Bruderman wrote in a statement. “She was originally drawn to NUMC because of the communities we serve.”

Ting said that she was drawn to NUMC because it looks just like the upstate Erie County Medical Center, where she did her training. Ultimately, though, she chose NUMC because “public hospitals attract me — NUMC being a safety-net hospital attracted me.”

It’s no wonder she chose the career she did: Her father was an orthopedic surgeon, and her mother was a nurse. “My father had gone to Africa for a mission,” she recalled, “and he would tell me all about delivering babies — because he was sent there as a surgeon — and he would tell us all about his cases, and he seemed so excited about it.

“I can’t say it was ever my childhood goal to be a doctor,” Ting added, “but I wanted to try it out and see how far I made it.”

Despite her nervousness about her new responsibilities, she said she was grateful that Boutin was there to guide her, and added, “I’m excited to see what we can do for the hospital.”