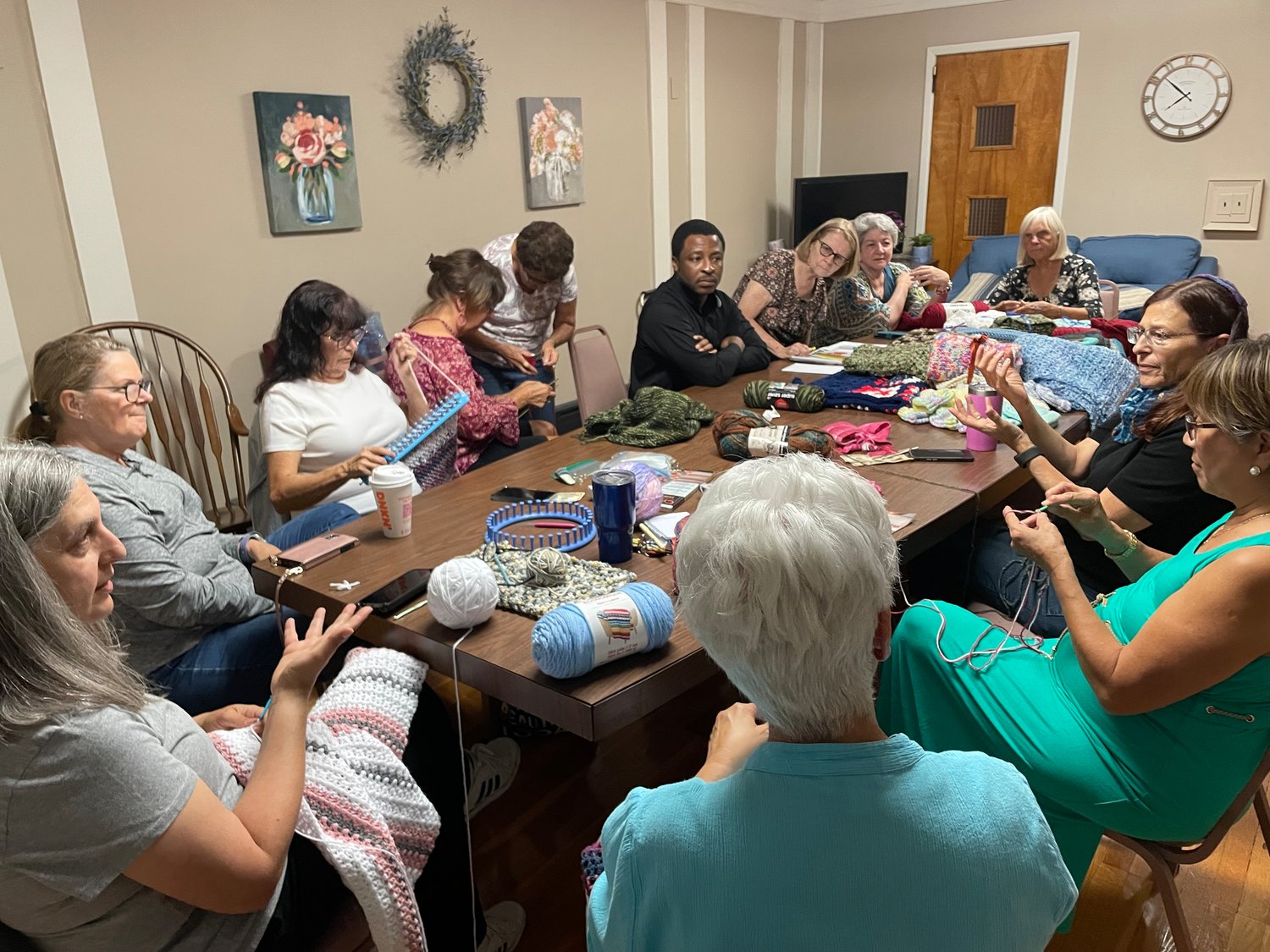 The Prayer Shawl Ministry knitting group gathered at Our Lady of Lourdes parish center on Sept. 22 to crochet for the needy, in addition to sharing stories and advice on technique.
Kyle Chin/Herald 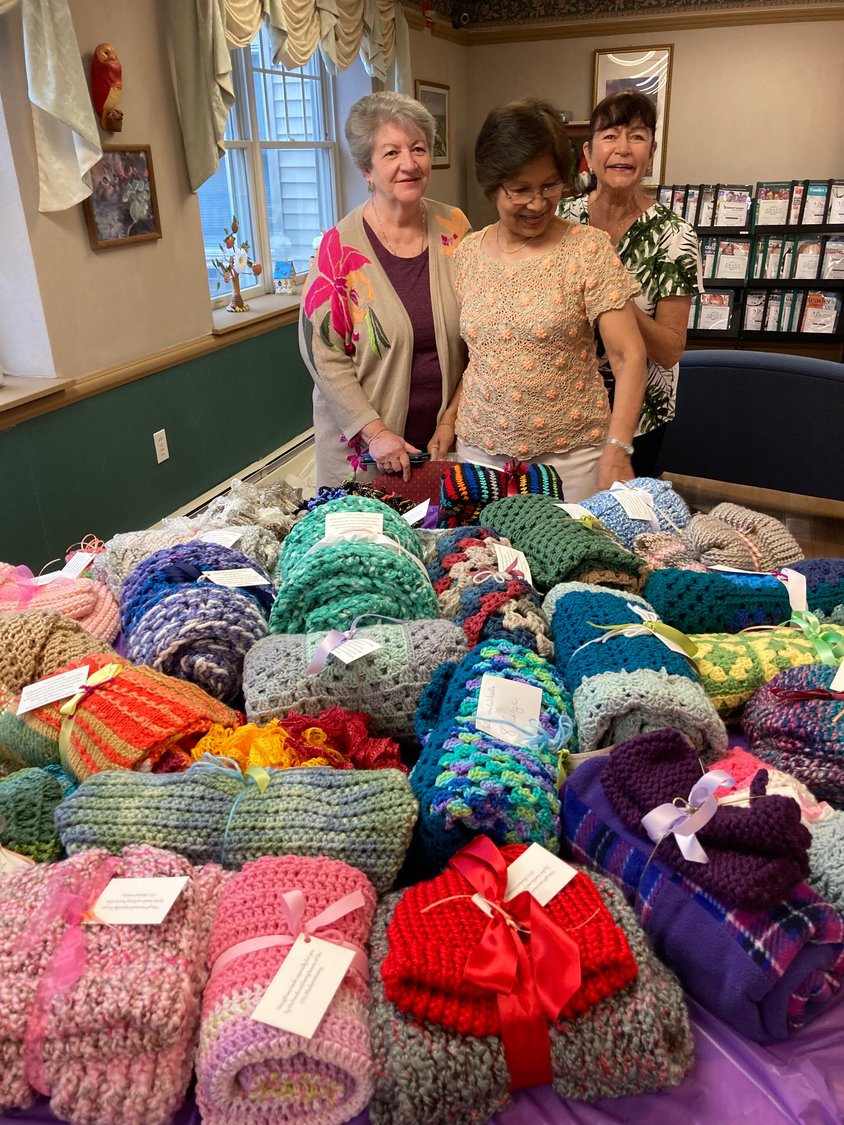 Rosemary Hoffmann, Emmy Santiago and Lynn Hellers, of the Prayer Shawl Ministry, with a pile of their knitted wares, which they donated to seniors at Saint Anne’s Garden apartment complex in Brentwood.
Courtesy Anne Seccia
Previous Next
By Kyle Chin

Members of Our Lady of Lourdes parish gather at 7 p.m. on the second and fourth Thursday of the month to create shawls, blankets, hats, scarves and much more while trading stories, tips and tricks with one another.

Four months ago, Ann Seccia and her daughter, Beth, put out a call in the church bulletin for anyone interested in knitting or crocheting for charity.

Beth Seccia initially came up with the idea, and during the pandemic, she reached out to a number of larger charity knitting groups, looking to participate or start a new chapter. Not finding much luck there, the mother and daughter decided to branch out on their own.

The Seccias have assembled a group of about 20 women who now contribute their work. Members of the group bring their own wool, yarn, needles and other materials to the parish center twice a month to work together. While the group was originally envisioned as a “prayer shawl ministry,” they have expanded to create a variety of articles of clothing that people might need.

The group’s creations go to a number of charity groups, particularly those serving the elderly and newborns.

“We first got in touch with a nursing home, and then Momma’s House,” Beth Seccia said. “Now it’s kind of gone word of mouth, and charities like Meals on Wheels are reaching out to us.”

Meals on Wheels of Nassau and Suffolk County recently hosted a lunch for seniors at Saint Anne’s Garden apartment complex in Brentwood, and invited the Prayer Shawl Ministry to bring some of their knitted wares to give to the participants.

“It was really, really great,” Ann Seccia said. “We enjoyed it more (than) they did, probably. They were trying on things that they selected. They were modeling and getting pictures taken. And they said, ‘Come back another time. You don’t even need to bring anything, just come back to talk.’”

The knitting group also has contacts with the Highfield Garden Care Center in Great Neck, another senior center that takes some of the group’s work.

The knitting circle’s creations also go to Momma’s House in Levittown, which offers housing and support for homeless and economically vulnerable young mothers and their children. The group from Our Lady of Lourdes contributes small knitted caps and gloves for newborns and infants who live in the center.

While these organizations benefit from the knitting group’s efforts, the program has been rewarding for its members as well.

“It’s such a good project, and it goes to so many people,” Rosemary Hoffmann, one of the knitters, said. “It let’s them know that they’re not alone. They’re remembered. Somebody cares about them. But what’s nice, too, is that we really like coming here. You know it’s a social activity for us, too. You give, you get.”

The knitting program has brought together members from across religious denominations. Rabbi Susan Elkodsi of the Malverne Jewish Center has come to call the knitting group home as well after finding out about it through a mutual friend with Beth Seccia.

“Once in a while, when I don’t have anything, it’s nice to get out and see people and make something for a good cause, whatever it is,” Elkodsi said. “We’ve gotten into some interesting theological discussions. But we’re all here ‘cause we’re having fun. We’re doing something with our hands. It’s holy work and we’re doing it together. The idea of helping out those who are in need is a value that Judaism and Christianity share.”

Father Michael Numekevor of Our Lady of Lourdes Church said he sometimes drops in on the knitting group’s meetings as well.

“I’ve come to love these women who have come together in their own small way to do something to benefit others,” he said. “They use their gifts, their talents that God has given to them to bless other people.”