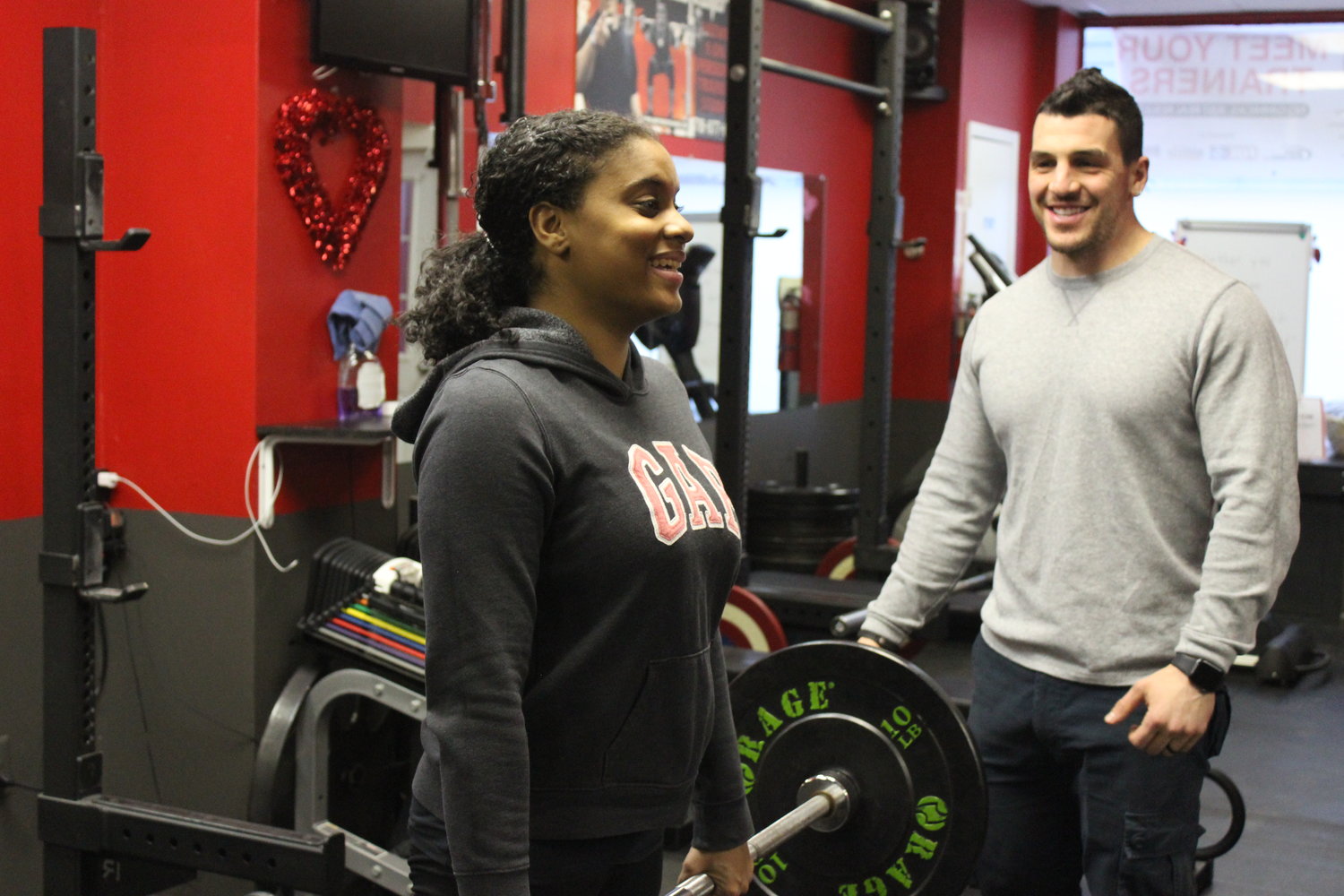 Yanelin Gonzalez, 23, of Copiague, left, began working out with Anthony Bevilacqua at AB Fitness Center, in East Meadow, after recovering from a series of health complications related to her kidneys, including cancer, which she survived as a baby.
BRIAN STIEGLITZ/HERALD 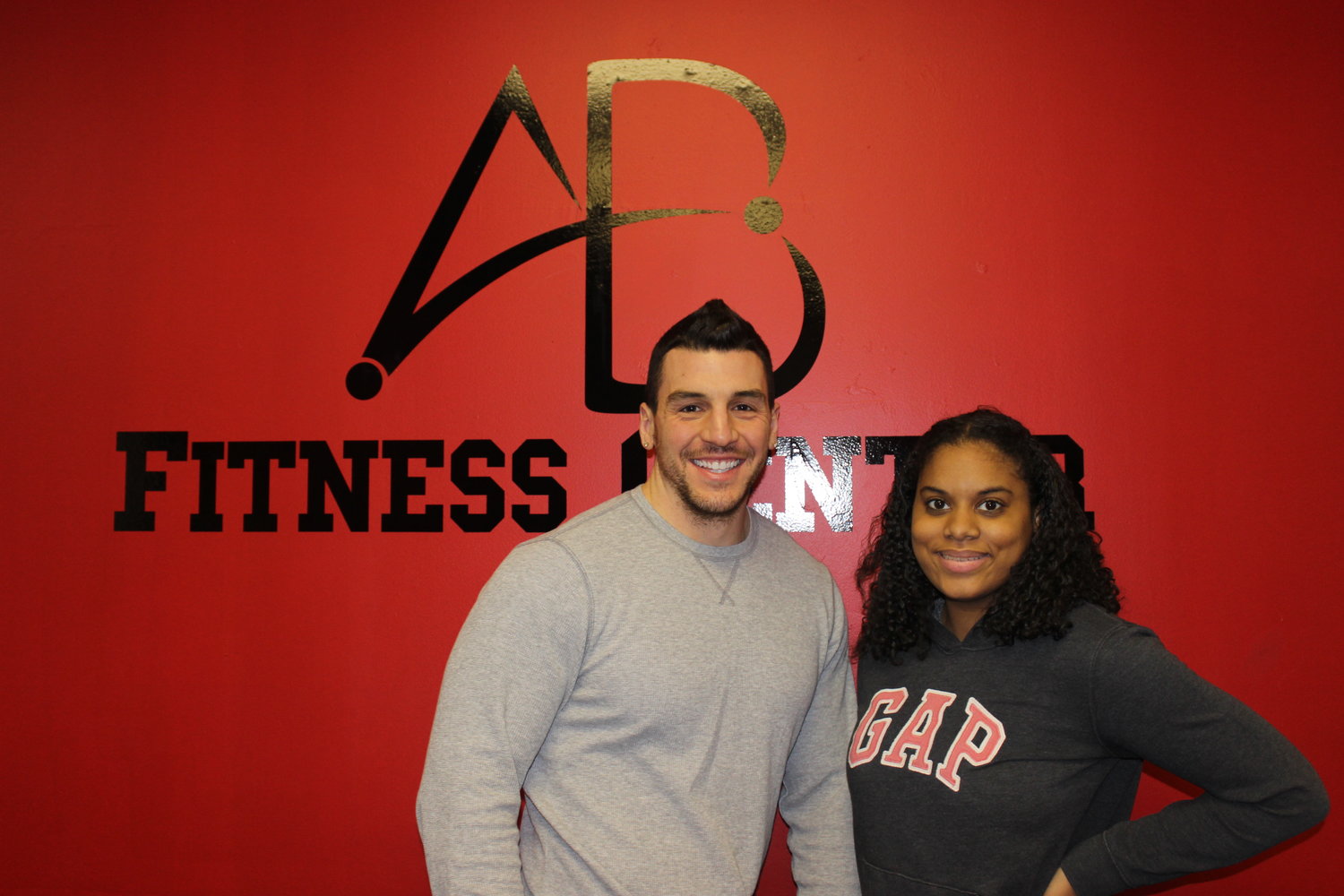 Now, Bevilacqua, left, is training Gonzalez to become a personal trainer at his East Meadow gym.
BRIAN STIEGLITZ/HERALD
Previous Next
By Brian Stieglitz

Before Yanelin Gonzalez began working out at AB Fitness Center in East Meadow, she was worried that she wouldn’t be able to lift heavy weights. The 23-year old Copiague resident, who is on her way to becoming a personal trainer, underwent a kidney transplant in December 2017, and had heard that intense exercise could cause internal damage.

Growing up, Gonzalez had a series of health complications related to her kidneys that led to the transplant. After her surgery, she had high blood pressure and high cholesterol, and began gaining weight. She recalled wanting to work with a personal trainer because “I needed that push,” she said. “I didn’t have any motivation.”

Anthony Bevilacqua, a personal trainer for 15 years, began working with clients in his East Meadow garage five years ago before opening a storefront gym on East Meadow Avenue. Working with him at AB Fitness, Gonzalez soon discovered that heavy lifting wasn’t a problem for her, and now, she said, she is healthier than she has ever been. “Your body is capable of so much, it’s insane,” she said.

When Gonzalez was an infant, a tumor was detected on her left kidney. She was diagnosed with cancer and had the kidney removed, clearing her body of the disease after she underwent chemotherapy. Then, at age 7, she was diagnosed with focal segmental glomerulosclerosis, a disease that affected her other kidney’s filtering process and caused the excretion of protein in her urine.

She was put on medication to treat the disorder, but years later, when she was 21, she developed a urinary tract infection, and doctors determined that she was on the verge of kidney failure and needed a transplant. After receiving a kidney from her brother, Gonzalez faced another health risk: The medications she was taking to help her body accept the new organ risked severely decreasing her levels of insulin, which helps regulate blood sugar.

Six months after her transplant, Gonzalez was diagnosed with Type 2 diabetes. “I’m usually really in tune with my body and knowing when something is wrong,” she said, recalling a day last July when she was excessively thirsty no matter how much water she drank. The next day, her vision grew blurry, and the day after that, she woke up and vomited.

Despite the diabetes, Gonzalez views the surgery as having giving her a second chance at life, she said. When her health was declining, she stopped pursuing a college career and thinking about her future plans. She knew that she wanted to work out, however, and recalled searching for personal trainers online before finding Bevilacqua, who she said had the best reviews.

From there, Gonzalez began working with Bevilacqua and two other trainers — Anthony’s sister, Laura, 25, of Wantagh, and Pete Khatcherian, 29, of Valley Stream. They not only work out with her, but also help Gonzalez plan her meals to offset the effects of her diabetes and improve her overall health. “Our main goal was to give her her life back,” Bevilacqua said.

Gonzalez has come so far in six months of training that Bevilacqua now wants her to join his team at AB Fitness. “People say it’s easy for me because I’ve been [training] for so long,” he told her. “You can show anybody that they could do it, too.”

Gonzalez takes insulin four times a day, which keeps her blood sugar levels normal. If it weren’t for working out, she said, she would not have made so much progress in such a short time. “Exercise has literally saved my life,” she said, “and I can never stop working out.”

She is now taking an online class to become a certified personal trainer, and says that her next goal is to inspire others, especially when it comes to donating organs. “I really want people to know that you could live with just one kidney,” she said. “Now I’m living a perfectly normal life.”

“You’re definitely going to be a big asset to the team,” Bevilacqua said to her. “I can’t wait for you to start.”