Attorney general files suit against Shake A Paw in Lynbrook 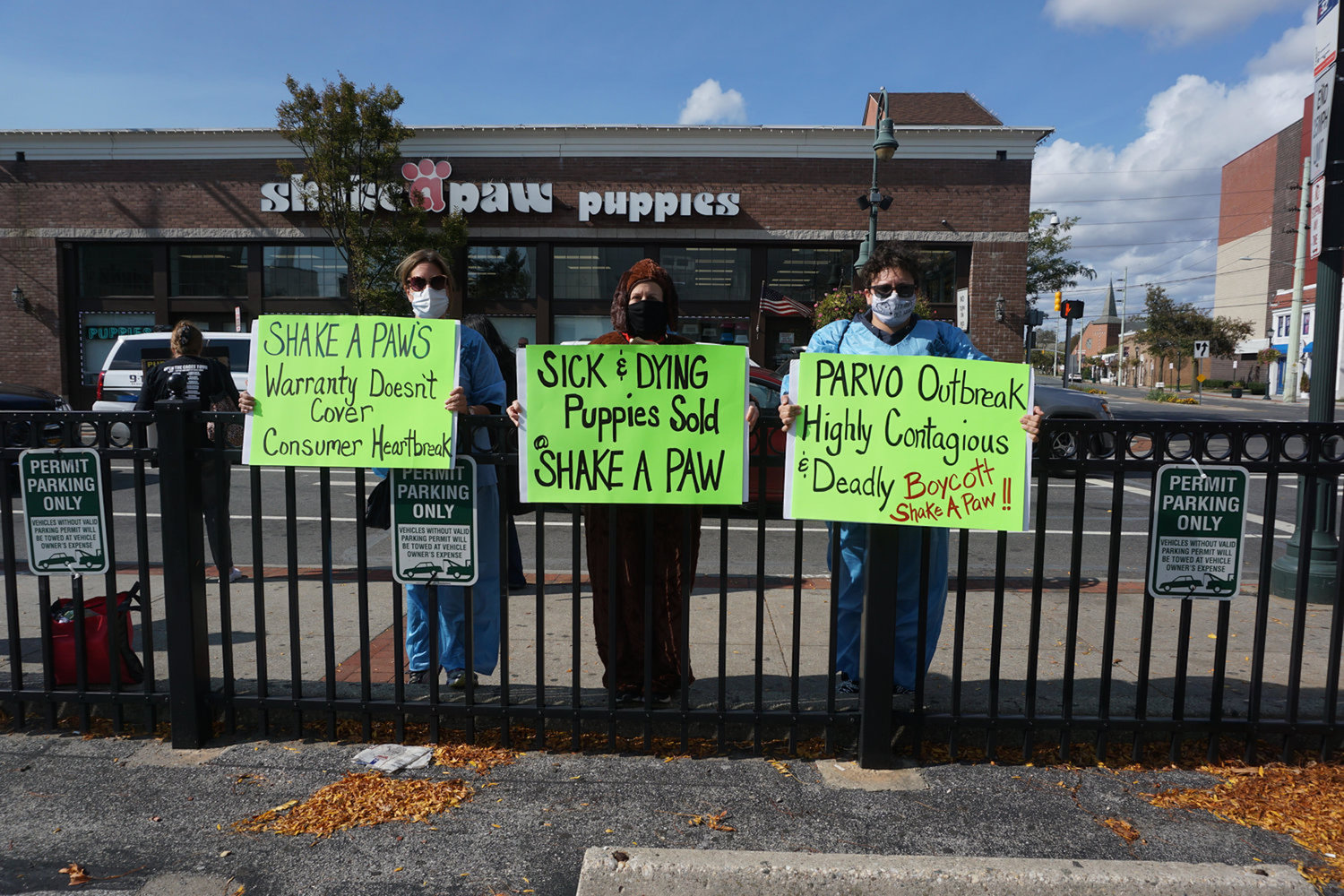 The state attorney general’s office has filed suit against Shake a Paw stores in Lynbrook and Hicksville, after many customers alleged that they purchased dogs from the businesses that later died. Protesters demonstrated outside the Lynbrook store in October 2020.
Herald file photo
By Mike Smollins

After years of customers alleging that Shake a Paw stores in Lynbrook and Hicksville sold them sick puppies that eventually died, and following rallies against the businesses, the New York state attorney general’s office has filed suit against the establishments.

Shake a Paw — at both of its locations — sold dogs that came from puppy mills while telling customers they were from legitimate breeders, alleged a lawsuit filed in Nassau County Supreme Court by Attorney General Letitia James’s office Dec. 16.

Many of the puppies had serious illnesses, including pneumonia, breathing problems, infections and congenital defects, and several had parasites, according to the suit. Customers allege that certain issues were kept hidden from them, and the stores are accused of doctoring health certificates, advertising healthy dogs for sale and lying about the breeds, according to the filing.

“When New Yorkers purchased puppies from Shake A Paw, they did not expect to bring home dogs in such heartbreaking and horrifying conditions,” James said in a statement. “Today, we are holding Shake A Paw accountable for their unlawful and inhumane actions by filing a lawsuit to permanently ban the company from selling puppies any longer, as well as to recoup what consumers paid. Animal mistreatment is despicable and will not be tolerated.”

When a Herald reporter called to seek comment about the suit Monday, a Shake a Paw employee hung up, and further requests for comment from the storeowner were not returned directly at press time.

Richard Hamburger, a lawyer representing Shake A Paw, emailed the Herald a statement on behalf of the business, denying all allegations, noting that the businesses are cooperating with the state’s investigation.

“Shake a Paw has never knowingly sold a sick puppy, or knowingly misrepresented the pedigree, or breeder from whom the puppy was acquired,” the statement said. “On the rare occasion when a sold puppy has taken ill, Shake A Paw has reimbursed veterinary bills up to the sales price, given a full refund or exchanged the puppy for another.”

The statement also said that the store does not purchase dogs from puppy mills, and noted that the state Department of Agriculture and Markets found the stores to be in compliance after “numerous unannounced inspections.”

Hamburger called the suit “reckless,” and said it “threatens to destroy the good will and reputation of a good and decent small business that has, over the past 28 years, brought joy to 80,000 loyal and highly satisfied Long Island pet owners and their families.”

According to the claim, at least nine dogs that Shake A Paw sold “died soon after sale” from various ailments, and many customers paid “hundreds of dollars of unnecessary additional goods and services,” and sometimes thousands of dollars. Many owners also had to quickly take their new dogs to the vet, racking up bills that Shake A Paw did not reimburse them for.

Since 2016, the attorney general’s office has received 99 complaints about the stores, while the Better Business Bureau received another 33 complaints, leading to investigations into the establishment’s practices.

In a probe into veterinary records for 408 dogs sold at Shake A Paw, James’s office found that about half of them had infections, coughing, sneezing or breathing problems, more than half were infected with parasites, and 10 percent suffered from pneumonia.

James is seeking restitution and civil penalties from the shops.

Complaints against the stores have occurred for years. In 2018, Oceanside resident Heidi Cohen said that she purchased a male French mastiff named Izzy as a gift for her boyfriend, Michael Thompson, and the puppy immediately developed health problems. Cohen said she purchased the dog at the Lynbrook location, at 1 Atlantic Ave., and just hours later it was coughing uncontrollably. She added that when she called Shake A Paw, employees there would not put the owner on the phone.

The family took the dog to the veterinarian about six times over four weeks, Thompson said, adding that Izzy had to be hooked up to breathing machines at home. He said Shake A Paw covered the veterinary expenses, but would not pay any bills above the amount Cohen paid for the dog. Thompson said that Izzy eventually got better, but the ordeal was hard for her boys to deal with.

Around the same time, Jessica Tagliarino said that a few of her relatives had had problems with puppies purchased at Shake A Paw. “I know three dogs purchased there by my family members,” she said. “All needed surgeries, all were different breeds and had different reasons. One died too young, at 2 years old.”

Last year, Marisa Soto, of Staten Island, said she purchased two dogs at the Lynbrook location, and each of them died. The first, an 8-week-old Chiweenie — a cross between a Chihuahua and a dachshund, which the family named Betty — developed a cough and died three days later. The replacement, an 8-week-old dachshund, which they named Dottie, got sick, developed diarrhea and had to be euthanized.

In October 2020, dozens of people gathered outside of the Lynbrook store for a rally against the businesses’ practices. Chants of “Adopt, don’t shop!” and “There’s no excuse for animal abuse!” echoed outside from protesters who gathered after a number of customers reported buying puppies there that got sick and died.