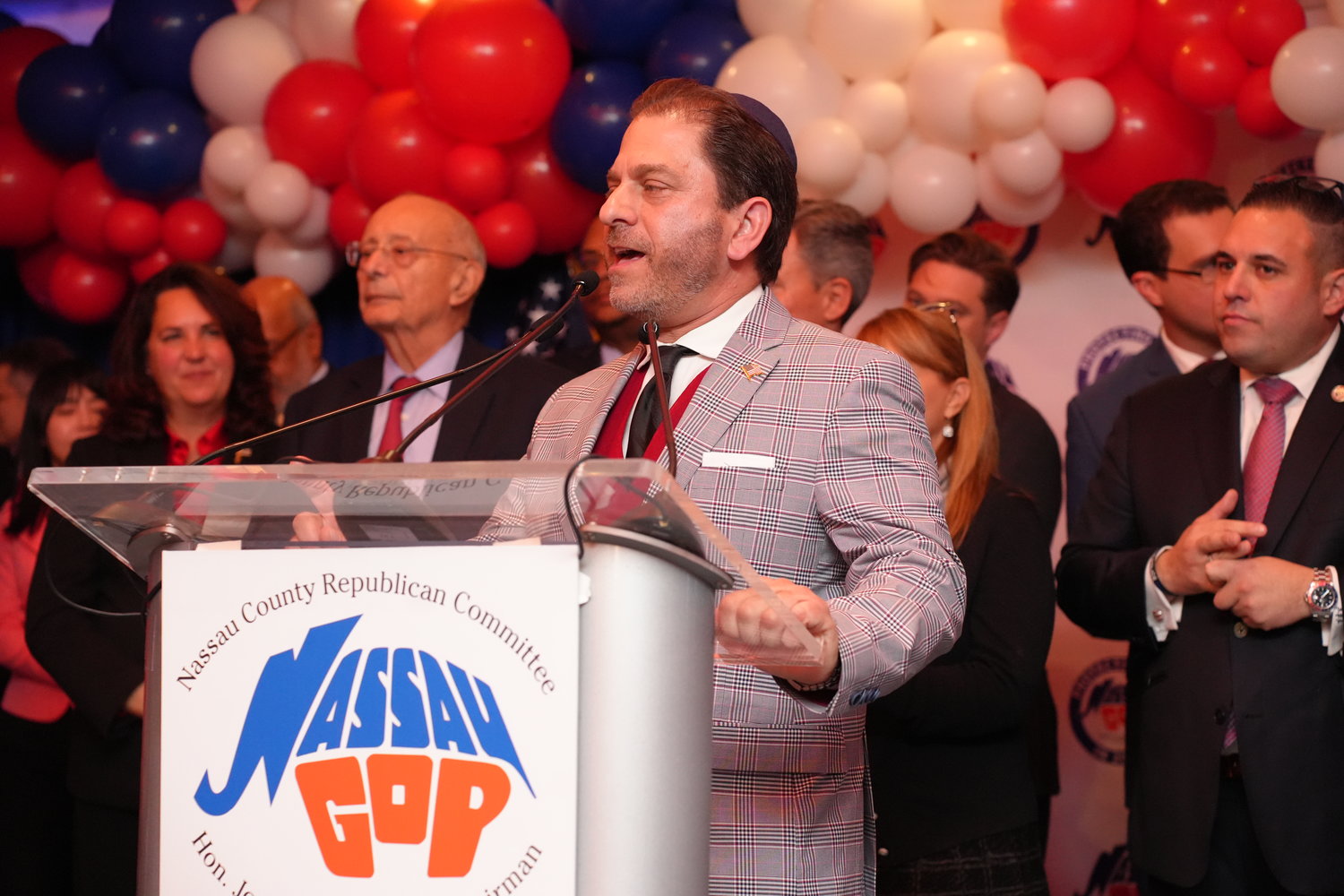 Ari Brown spoke at Republican headquarters on election night in November, after defeating Democrat Mike Delury for the seat in the 20th Assembly District.
Tim Baker/Herald
By James Bernstein

During his campaign in November to represent the 20th Assembly District, which encompasses Long Beach and the Five Towns, Republican Ari Brown, a builder, frequently used a slogan to show how strong he also was politically.

Even before he takes his seat in Albany, Brown is already taking a rhetorical  hammer to what he characterized as Democratic Gov. Kathy Hochul’s plan to increase tolls on the New York State Thruway.

The spokesman said the decision to raise the tolls was made by the board of the authority — not by the governor. He added that the authority would hold public hearings on the tolls.

The Thruway Authority said that tolls have not been raised since 2010, and the additional money is needed “to ensure the Authority will meet its growing capital and infrastructure needs for a system that is approaching 70 years in age.”

Brown — and some Democrats — are having none of it.

In a news release last week, Brown stated, “New York has already ditched toll booths, laying off thousands of workers to lighten their books, and now they want more from our already cashed-strapped families. It was just this year that the governor gloated about New York’s rich coffers, and now she’s raising taxes — unconscionable.”

Asked how wise it is for a relative newcomer to the Legislature to take on the governor, who in November was elected by a wide margin to her first full term, Brown responded, “Why not? I’m one of the older state legislators.” He is 55. “I’m not a politician. I’m doing this to serve. I’m not looking to make this a career.”

Jim Moriarty, a spokesman for Long Beach Republicans, said that speaking out politically always involves risk. But, he added, “Any legislator has the opportunity to voice his opinion. Being a legislator is not just about passing legislation. It’s about digging into things and speaking out on the things that are wrong.”

Brown, who lives in Cedarhurst. won a special election last April to succeed Melissa  Miller, a Republican who was appointed to the Hempstead Town Board. She replaced Bruce Blakeman, who is now Nassau County executive. In November, Brown swamped Mike Delury, a former Long Beach City Council member, in the Assembly election. Brown was previously the deputy mayor of the Village of Cedarhurst.

Brown is coming to Albany with a suitcase full of proposals:

He wants all electric auto charging machines in the state to be built with parts made in America.

Occupational therapists, he said, should be paid on a par with teachers in New York state.

Firefighters should have two special license plates, front and back — not just the single one they have now — to provide them more access on the road.

Senior citizens should have access to home aides who can treat them for psychological issues.

Children with special needs should be on school buses for no longer than an hour and a half.

Brown said he would continue to fight cashless bail and those calling to “defund the police.” Both were flashpoints in the November elections. Hochul and state lawmakers have clarified New York’s bail laws, making more crimes eligible for bail and giving judges more discretion when setting bail.

Brown is far from convinced that Hochul has gone far enough. He wants to eliminate cashless bail entirely, and says the bail system is “a mess” that was created by Democrats.

Lawrence Levy, executive dean of the National Center for Suburban Studies at Hofstra, said that Brown’s success may depend on his ability to be a moderate.

“Does he want to align with the right wing of his party, or take a more nonpartisan approach?” Levy said. “The latter would give him more of an advantage.”

Levy added that Brown could work with Democrats on two key issues — improving the Metropolitan Transportation Authority and the Long Island Rail Road, and health care. “These are the things people care about,” Levy said.

Whatever political path he chooses, Brown said he is always mindful that he is at heart a builder. Will he be swinging that hammer? “Of course,” he said. “I always do.”