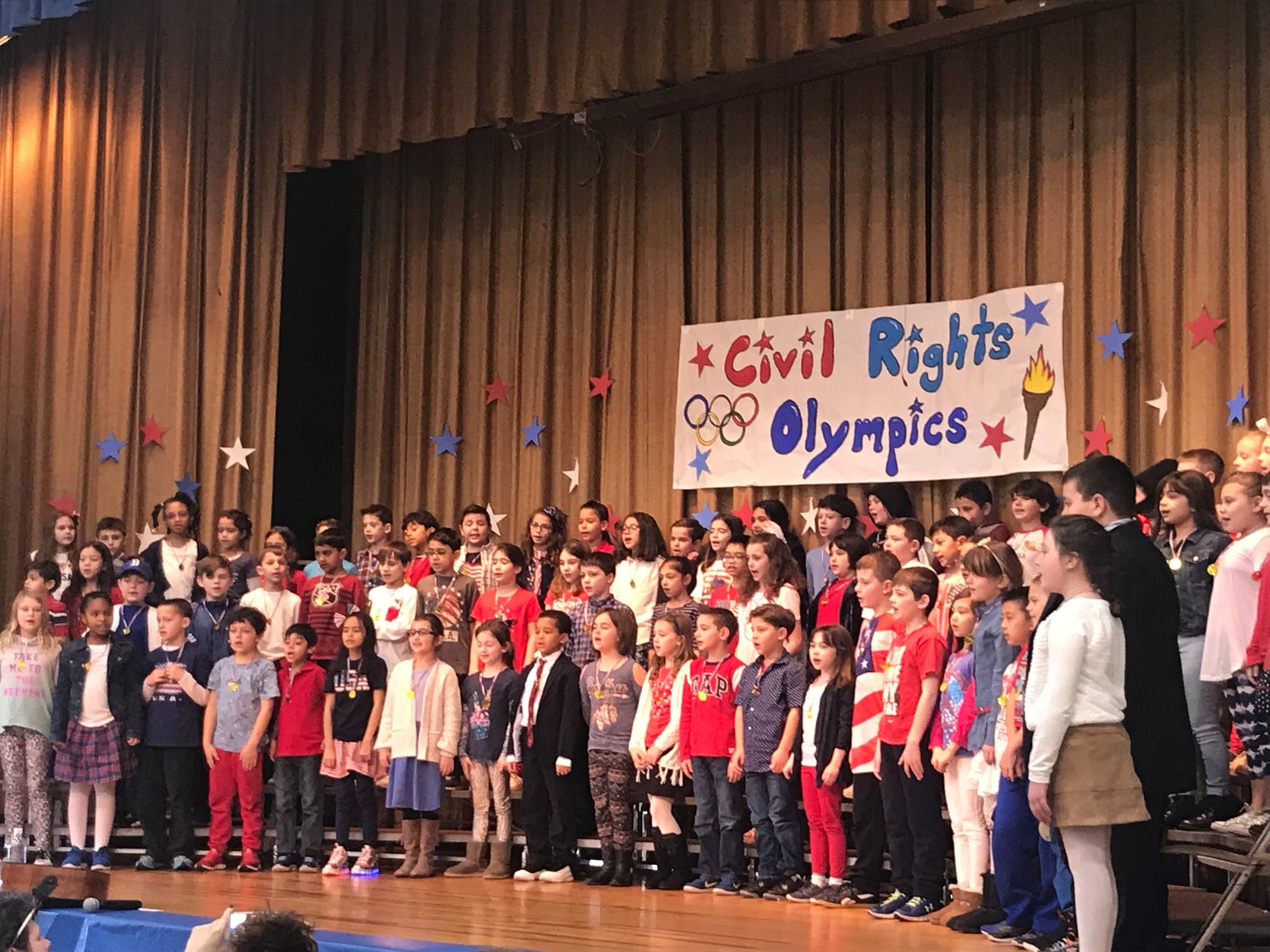 Marion Street School third-graders performed songs and skits in the Civil Rights Olympics, and presented visitor Joseph McNeil with a gold medal at the end of their performance. McNeil was part of the Greensboro, N.C. sit-ins at Woolworth’s, in protest of segregation in 1960
Mike Smollins/Herald 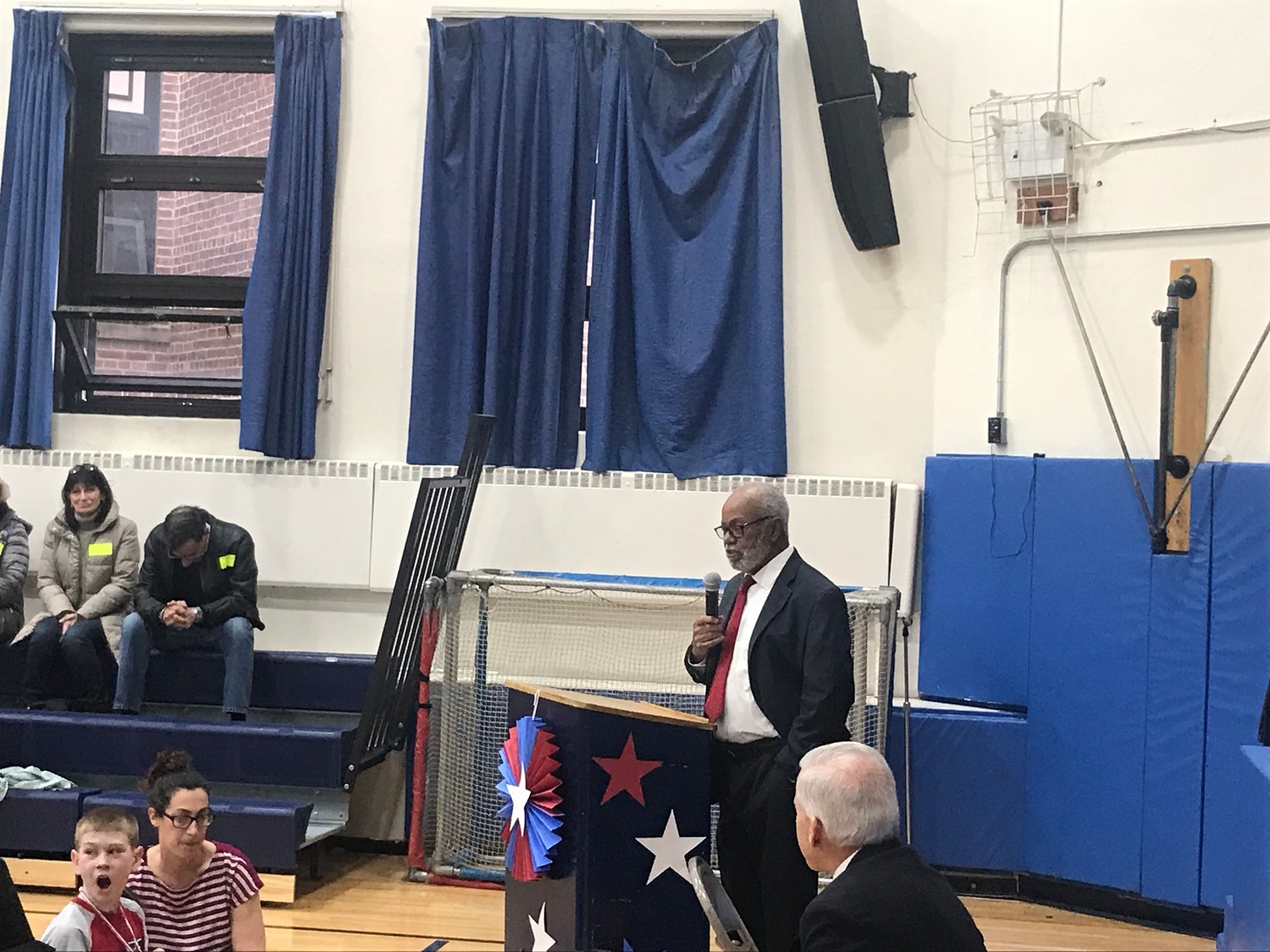 McNeil shared his story and fielded questions from students on Feb. 16.
Mike Smollins/Herald 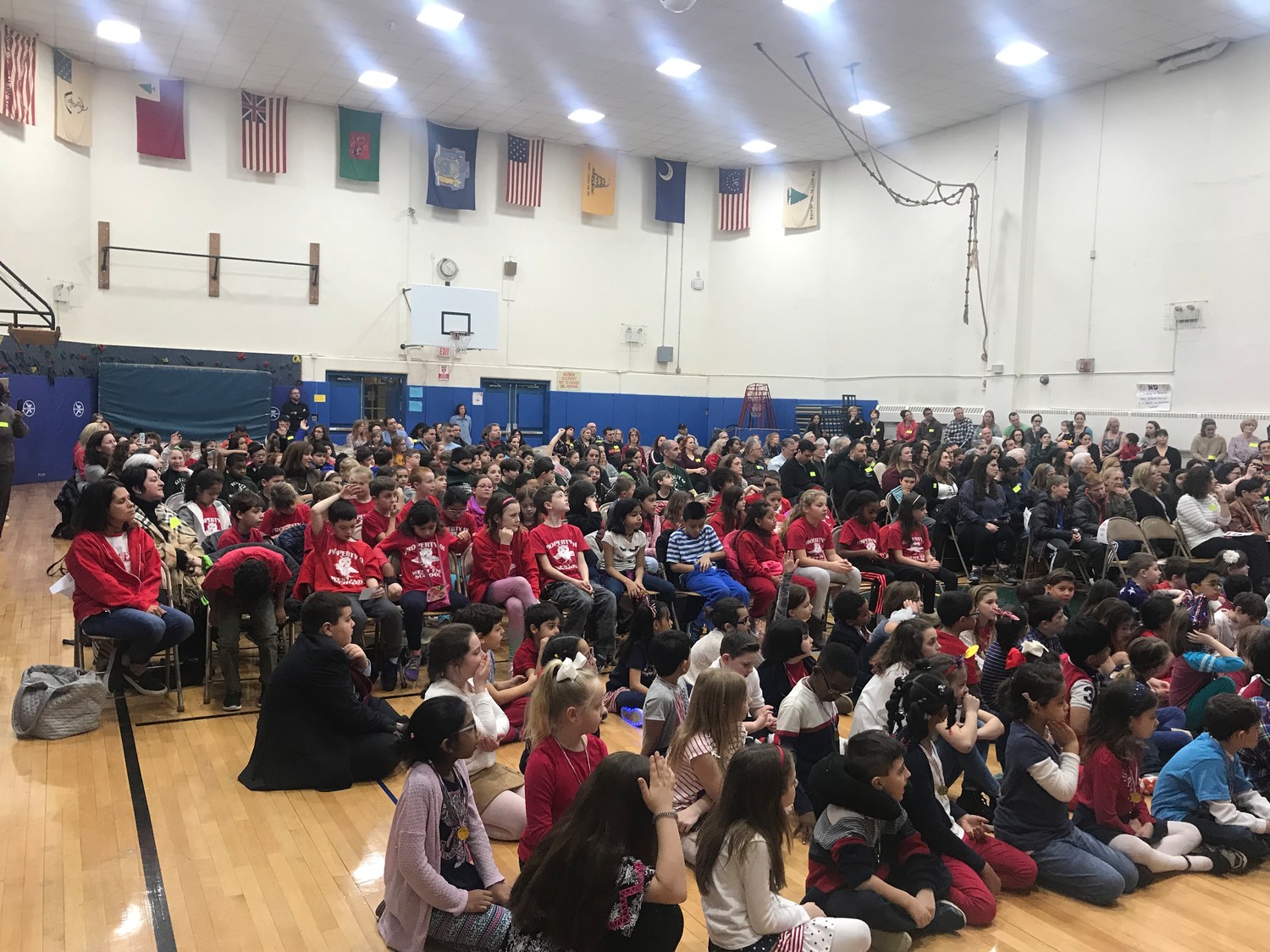 Dozens of students, faculty members and parents attended the assembly to listen to McNeil’s story.
Mike Smollins/Herald
Previous Next
By Mike Smollins

Third-grade students at Marion Street Elementary School honored Joseph McNeil, an activist who helped lead nonviolent protests against segregation in Greensboro, N.C. in 1960, with a gold medal as the star of their Civil Rights Olympics on Feb. 16.

From Feb. 1 to July 20, 1960, McNeil was one of four freshman attending North Carolina Agricultural and Technical College to sit at Woolworth’s “whites only” lunch counter in Greensboro. The group, which came to be known as the Greensboro Four, came to Woolworth’s every day and refused to leave until they were served.

“It stays with you forever, particularly when people you first met 30 years ago come up to you and say, ‘I’m so happy that you’re still doing this,’” McNeil said about sharing his story. “It’s part of a legacy that we all help build.”

McNeil and his friends’ nonviolent sit-ins influenced people from 54 other cities across eight states to follow suit. McNeil went on to graduate from the school with a degree in engineering physics in 1963, and spent 37 years in the Air Force Reserves, retiring as a major general in 1996 after earning many accolades. McNeil, who will turn 76 on March 25, now resides in Hempstead. He has visited the school every year since 1991 as part of its Black History Month festivities.

Third-graders from each building in the Lynbrook School District gathered in the Marion Street gymnasium to hear McNeil’s story and ask him questions. One student asked McNeil if he ever met Martin Luther King Jr., and he said he did in South Carolina at the height of the protests, and that King was very supportive of his actions.

After the Q&A, third-graders performed the Civil Rights Olympics, comprised of a series of skits and songs. Some of the students dressed up as important figures, including King, Rosa Parks, Gandhi and Jackie Robinson, and recited lines based on the life experiences they learned about those influential people.

Steven Freifeld, a third-grade teacher at Marion Street, shared an example of how McNeil’s visits have influenced students over the years. He read an email from Kathy Vito, who wrote that her son, Nicky, a student at the school, recently found himself in a situation with her daughter that would usually lead to an argument.

“Yesterday, however, Nicky took a different approach,” the email to Freifeld read. “He sprawled himself on the living room floor and declared, ‘I am protesting peacefully!’ … This turned a usually explosive situation into a funny one. So thanks to you and Joseph McNeil, we had one afternoon of peace.”

McNeil said he was happy to hear that his story influences students, and was thrilled to watch them perform.

“It’s important to me, because I learn from these events,” he said. “It gives me hope that the future is in good hands when I see these young kids taking on very difficult concepts and making things work.”