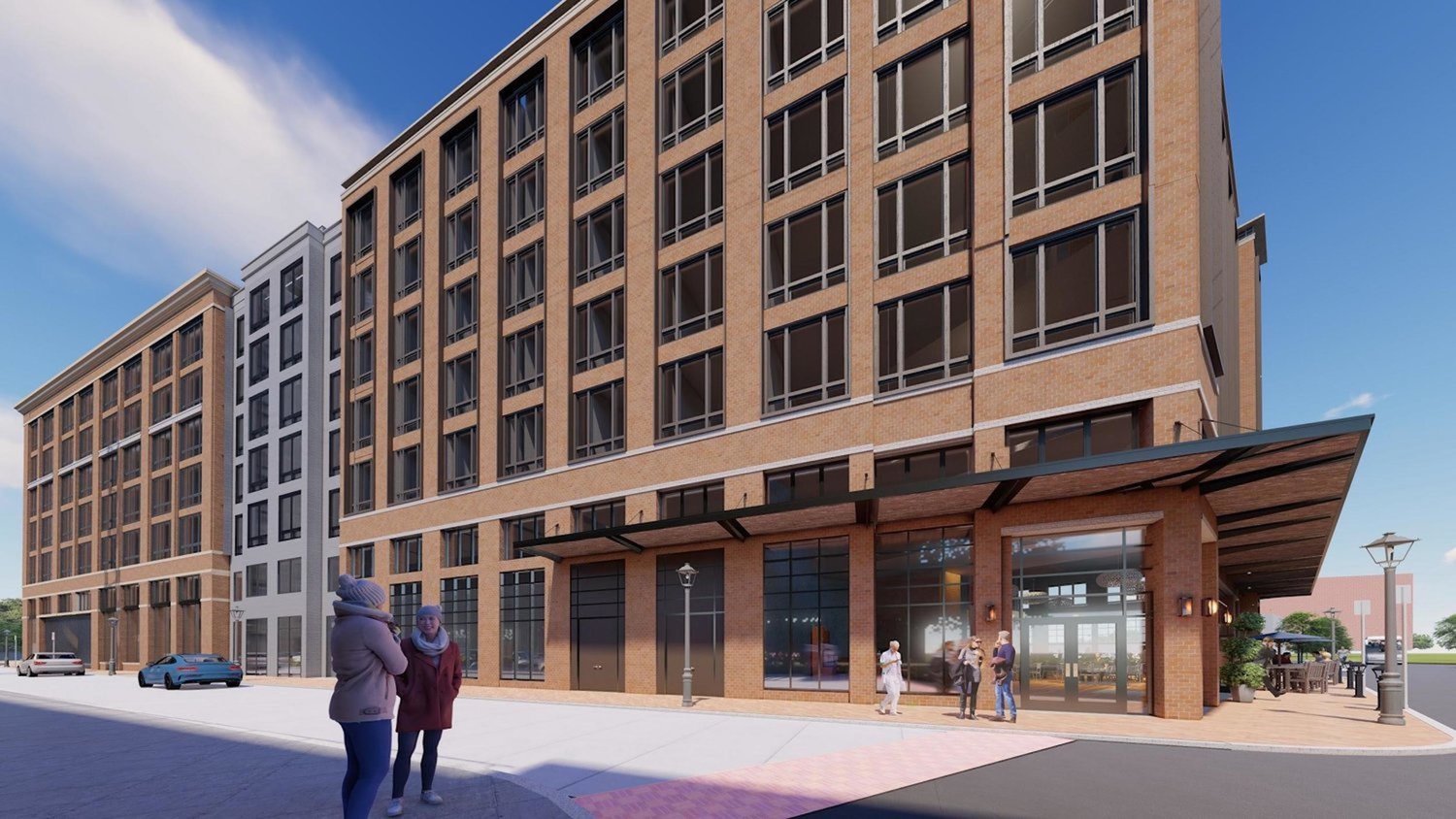 Variances have been approved for the roughly $95 million, 201-unit apartment complex slated for the site of the former Mangrove Feather factory.
Courtesy Breslin Realty 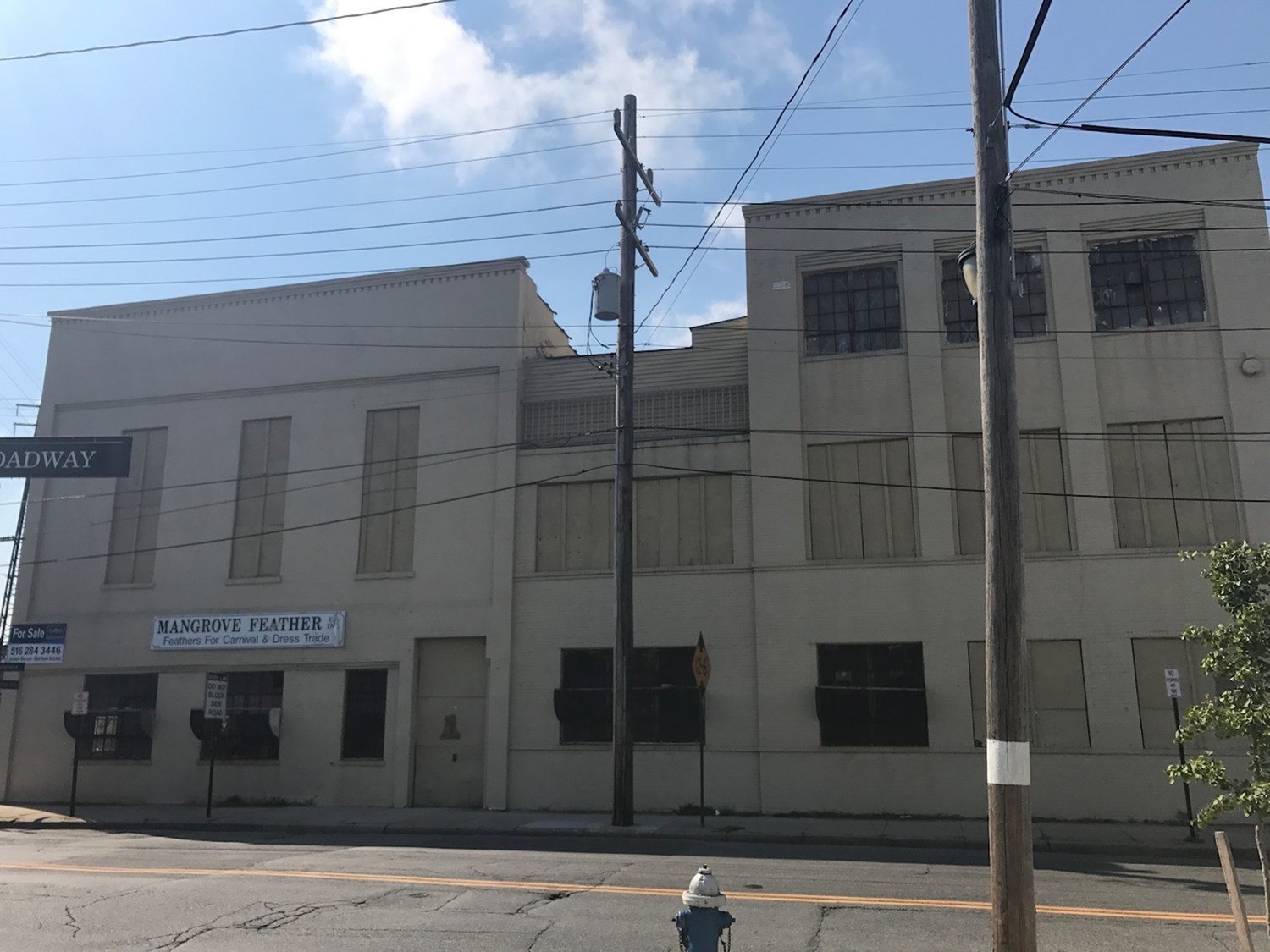 The building at 4347 Broadway has been a fixture in Lynbrook since the early 1900s. Village historian Art Mattson noted in his book, “The History of Lynbrook,” that it was originally known as the Bates Opera House and owned by Ed Bates.

According to Mattson, the opera house was sold to Max Strassner and Jesse Bettmann in 1916, and they converted the building into a knitting factory. By 1917, the Atlantic Knitting Mills became Lynbrook’s largest employer, employing 60 men and 60 women.

The property remained a source for development for many years, and eventually the Mangrove Feather Company moved into the ground floor. It produced feathers for the carnival and apparel industries.

In 1982, Reuben Marin purchased the 35,000 square-foot, three-story building and manufactured men’s sportswear for his company, English Sportswear. He distributed his products to well-known outlets such as Brooks Brothers, Saks Fifth Avenue and others.

In 2005, Marin was looking to close his business when he received what he described to a Herald reporter in a 2018 story as “a very compelling offer” from Barry Singer and sold him the property. Singer subsequently clashed with village officials, who did not approve his plans to redevelop the building.

In 2017, David Orwasher, the chief development officer for Breslin Realty, began negotiating with Singer, and they reached an agreement to build an apartment complex there.

The board approved the project last November. After a PILOT and variances were approved, developers announced they aimed to start the project in mid-April.

Developers have set a target date of mid-April to begin work on the $95 million, 201-unit transit-oriented apartment complex at the site of the former Mangrove Feather factory.

On March 10, a state review board approved a variance for the development to be built by the Garden City-based Breslin Realty. A 278,014-square-foot development with 55 studio, 111 one-bedroom and 35 two-bedroom apartments is planned for the site, which has been vacant since 2008. Lynbrook officials approved the project last June, after developers hosted public hearings. It is intended to be a transit-oriented development, geared for young professionals who commute to Manhattan because of its proximity to the Long Island Rail Road station.

Lynbrook Mayor Alan Beach said he was “clicking his heels” with excitement at the news, because village officials have been attempting to redevelop the site for several years. He cautioned, however, that there could be some traffic issues associated with the project’s construction.

“I think we all should be very happy that the project is moving forward,” Beach said. “Even though it’s going to be a wonderful project, it’s going to take time, so everyone’s going to have to be very patient with the inconveniences that will take place, and the village will be very responsive to the needs of village residents to make it as painless as possible.”

With the variance approved, the former factory building will soon be demolished. In addition to razing the building at 4347 Broadway, developers will also tear down a two-family home nearby on Langdon Place and a warehouse on Saperstein Plaza to make way for the new structure.

The new development will be seven stories high, with two floors of parking — comprising 205 spaces — and five residential floors. Amenities will include a retail café, clubroom, concierge, rooftop terrace with grill, lounge, party room, a spa, a run for dogs and a gym.

Experts have estimated that the complex will add six to 19 children to the school district — a figure that is relatively low because most of the apartments are studios and one-bedrooms, without sufficient room for families.

“We’re happy and proud to be a contributor to the revitalization of the walking downtown in the Village of Lynbrook,” Breslin Chief Development Officer David Orwasher said. “We do think that this is a noble project that will add value across the board to the residents of Lynbrook by developing a quality project and replacing a derelict structure for nearly a dozen years that is an eyesore and a practical drag on the current downtown environment.”

While mid-April is the target date, Orwasher said that there could be construction delays and higher costs in the wake of the global pandemic and because of inflation. He also noted that building permits need to be approved before the project can move forward.

“I’ll reserve any jubilation until the ink is dry and the shovel’s in the ground,” he said.

In November, the Town of Hempstead Industrial Development Agency approved a 30-year payment in lieu of taxes, or PILOT, agreement. Under the PILOT, the annual tax rate will be frozen at about $185,000 for each of the first three years, then jump to $200,000 in year four and to more than $1 million by the 16th year. After 30 years, taxes will rise to $1.8 million.

Orwasher said developers did not seek any discounted taxes, and that the complex would fill a need for affordable housing on Long Island while getting rid of “a sore thumb that is front and center” in the village.

Fred Parola, the chief executive of the Town of Hempstead IDA, said he believed that the project would help the village in many ways and lauded the developers for not seeking a diminishment in taxes.

“It’s a positive from all standpoints, I think,” he said.  “I know the village is very much in favor of it, cleaning up a particular area and bringing new people into the area, so it’s a win-win as far as we can see.”