Love, water and some encouraging words 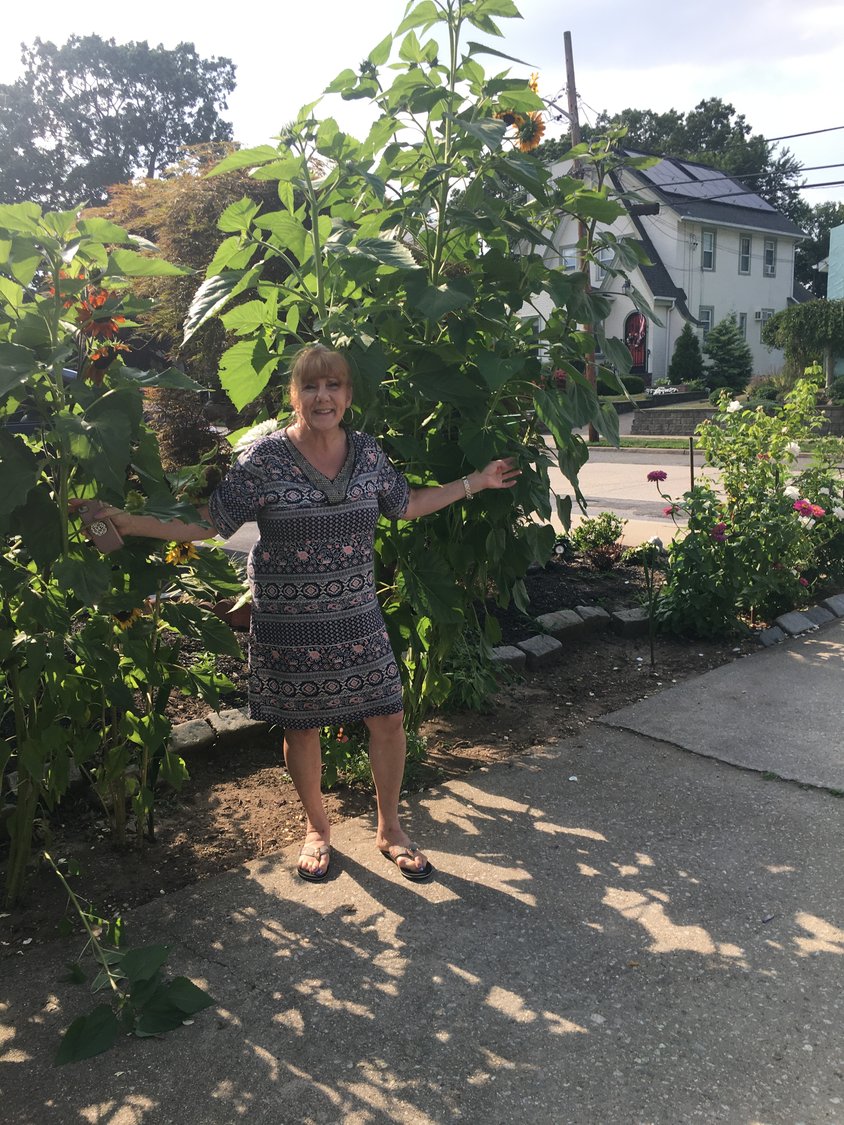 Geraldine Moccia-King is just 5-foot-3, which doesn’t give her a chance next to the giant sunflower she planted in her yard last spring. It was just nine feet here, but has since grown to more than 11 feet, with a chance to get even taller.
Photos courtesy Geraldine Moccia-King 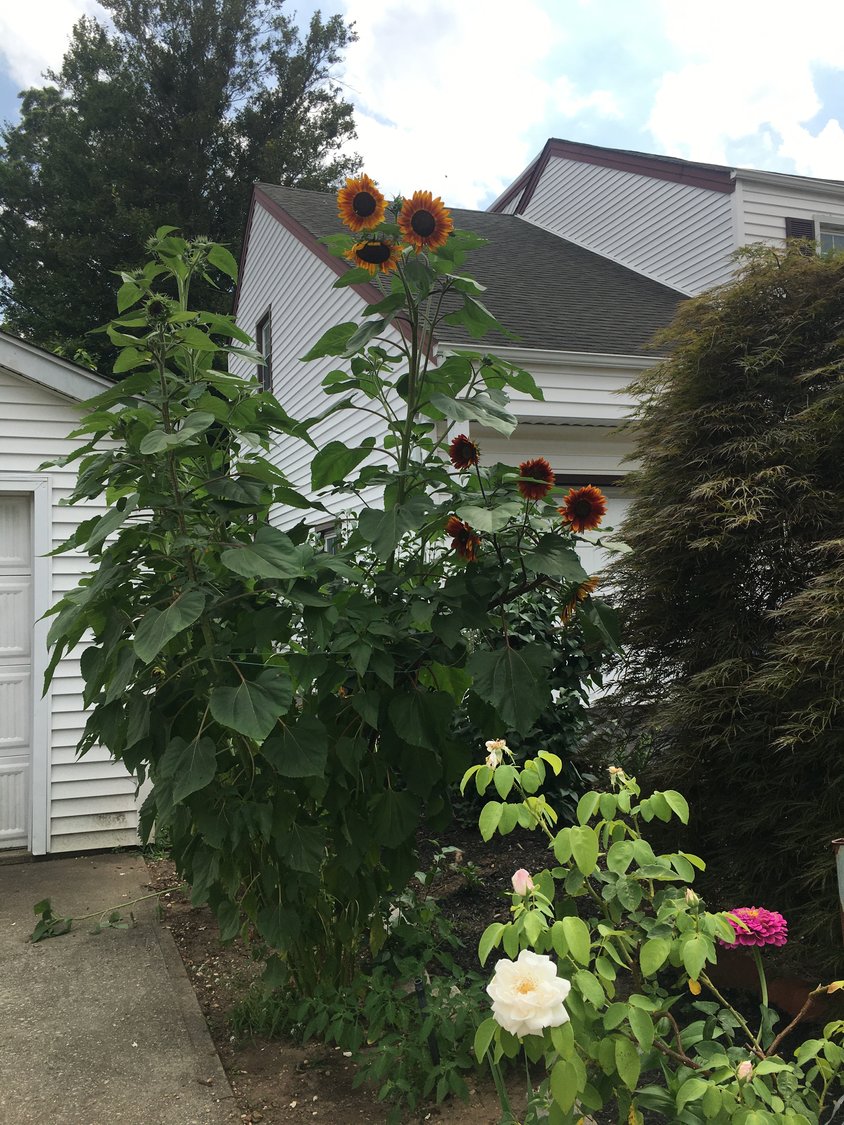 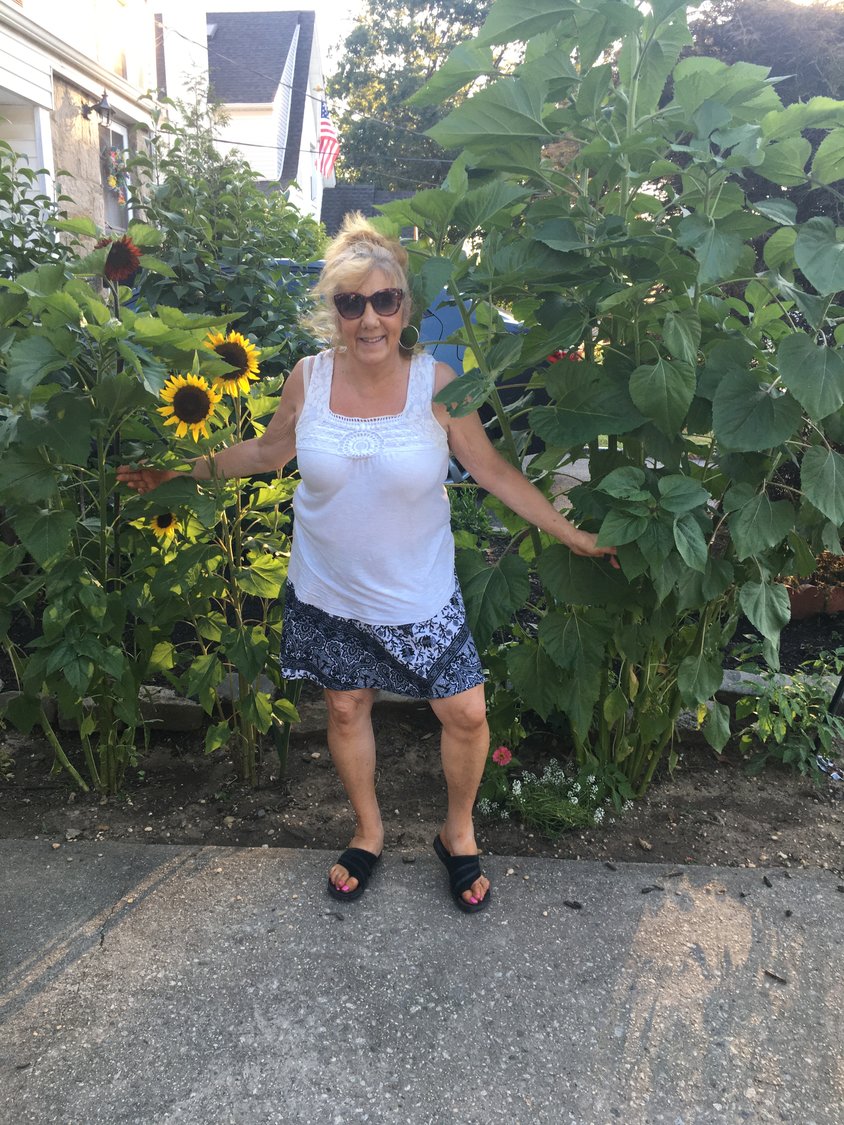 The record for the tallest sunflower ever grown — at least according to the “Guinness Book of World Records” — is 30 feet, 1 inch. It was grown in 2014 by Hans-Peter Schiffer in Germany.

Geraldine Moccia-King won’t be calling up the people at Guinness anytime soon, but the East Rockaway gardener has a sunflower of her own she can be proud of. And — at least, as of last weekend — it’s grown to more than 11 feet.

And it hasn’t stopped climbing quite yet. From the time Moccia-King first talked to the Herald more than a week ago to now, the perennial flowering plant added 24 inches.

Maybe Hans-Peter should be nervous. “Every year I plant a garden,” Moccia-King said. “This year, it came out phenomenal. I never thought it would grow that big.”

The average sunflower will tower over people, but typically only grows to about six feet. The bright yellow plants — probably better known for its seeds than the flower itself — is a favorite of Moccia-King, who has lived in the same house her whole life on the corner of Carman Avenue and Sachem Street.

By day — at least during the academic year — she’s a registered school nurse. During the summer break, she needed a hobby. So why not beautify her home with a garden.

Today, this garden is home to a variety of plants ranging from pea pods to morning glories. But the star of the plot is Moccia-King’s prized sunflower. While most of her garden is in her backyard, her sunflower has a much more prominent position — on the side of her driveway.

The sunflower soars over the six-foot, less extraordinary, plant beside it. The stalk is four inches thick, and it is topped with three bright yellow flowers.

Neighbors have taken notice, too, many walking by, stopping to marvel at what’s clearly become the queen of Moccia-King’s garden.

The genesis of this sunflower was not some crazy lab Moccia-King has hidden away in the basement. In fact, she simply bought the seeds from a store last April. She planted them, and by June, her flowers were blooming.

And as if it wasn’t tall enough already, Moccia-King expects her plant to grow even bigger as it enjoys the summer for at least another month.

So, what’s her secret? Moccia-King says it’s her dedicated gardening regime. Before planting the seeds, she double-dug the soil, which loosened the dirt. This allows more nutrients, water and air to break through to the plant.

Once the seed was planted, Moccia-King doused it in water, adding a touch of Miracle-Gro. And after that, it was all about the watering, something Moccia-King did twice daily — once in the day, and another at night.

When she did water during the day, Moccia-King made sure to pull out the crabgrass next to the flower, which would otherwise suck the nutrients from around the flower and deprive it of the nourishment it needs to grow.

But then there was one more element Moccia-King was sure to shower it with: love and care. She even whispered words of encouragement to them to help them grow. To the outsider, that might seem strange. But then again, who could argue with the results?

“Gardening has been something I’ve always enjoyed,” Moccia-King said. “I’m a nurse, so I love caring for people and living things. I think that is what inspired me.”