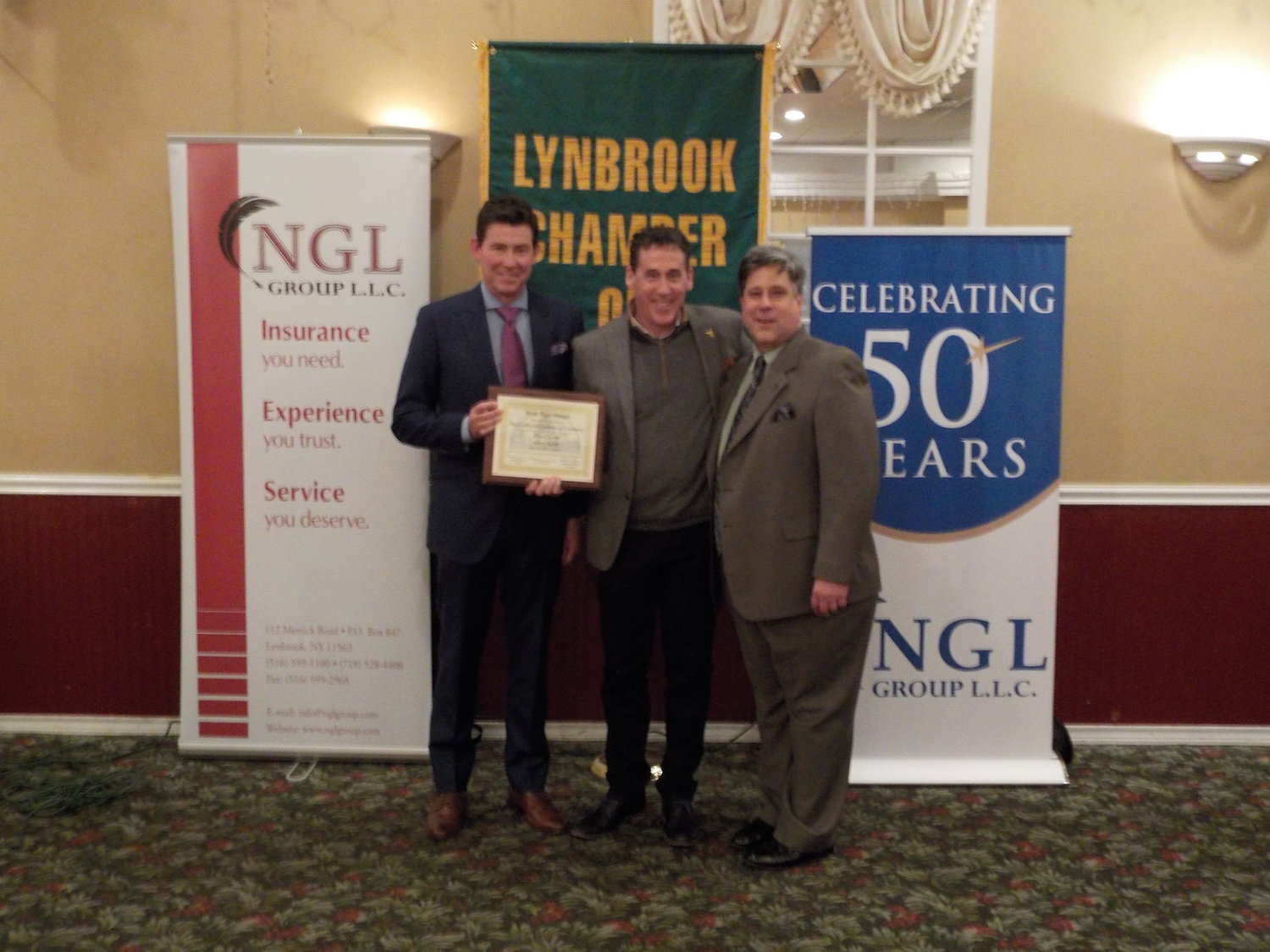 Bruce Levitt, left, and his brother, Harry, center, were honored when their business celebrated 70 years in 2017. With them was former Lynbrook Chamber of Commerce President Stephen Wangel.
Mike Smollins/Herald
By Madeline Armstrong

Mur-Lee’s Men’s and Boys’ Shop in Lynbrook recently celebrated 75 years in business. Started in 1946 by brothers Murray and Lee Levitt, the store has remained a family business, becoming an “institution in the neighborhood,” said Bruce Levitt, who is Murray’s son and co-owned the store with his brother, Harry. until the latter moved to Florida at the beginning of the Covid-19 pandemic.

“We just kind of grew up working in the family business as kids,” Bruce Levitt said. “I remember Saturday mornings my father throwing a cold washcloth on me to wake me up to get up and go to work.”

The business has been a part of the Lynbrook community since brothers Murray and Lee went into business together after World War II, opening the shop on Atlantic Avenue. Murray’s sons, Harry and Bruce, helped him run the business after Lee retired in 1979. Murray, a former president of the Lynbrook Chamber of Commerce, retired in 2000 and left the business to his sons, who helped it reach the more than seven-decade mark. He died in 2006.

When he graduated from high school, Bruce Levitt worked as an actor and a model for a few years in California before returning to Long Island to run the family business. Now, years later, the store is celebrating its 75th anniversary.

“It’s kind of amazing that we’ve survived so many ups and downs and pitfalls,” Bruce Levitt said. “We’ve always seemed to persevere … It’s kind of an amazing story.”

One of the pitfalls that Mur-Lee’s experienced was a drastic decrease in customers during the peak of the Covid--19 pandemic, during which many people stopped patronizing the business. During this time, Bruce started an eCommerce site and made accommodations for customers by making appointments for them to come in.

In this way, Bruce said, the business continued to push forward and was able to come out on the other side better than before.

“In the last five or six months, it’s been the best that we’ve ever had business because people are just hungry for product,” he said. “There’s been a tremendous amount of weddings and parties. They need clothes, so they come to us.”

The pandemic wasn’t the only challenge that the business faced over the years.

“We’ve endured wars, fires, recessions and an onslaught of many different outlets we all compete with that take away customers in a small village like Lynbrook,” Bruce Levitt said, “but through it all, we’ve managed to survive.”

When they were honored by the Lynbrook Chamber of Commerce in 2017 for 70 years in business, Harry Levitt said their father would be proud.

“My father loved the Village of Lynbrook,” he said at the time. “He gave all of his heart to it — in fact, sometimes he gave more of his time to the village than he gave to his family, as my brother will attest. He would have been very proud of this moment, and we wish he was here to see it.”

Bruce Levitt said he truly enjoys his job outfitting people at Mur-Lee’s and is thrilled that they are back in business, busy as ever. He said his favorite part of running the store is helping people find outfits that make them feel good. He added that he has enjoyed watching his family business thrive and grow, and he hopes to continue clothing people from Lynbrook and beyond.

“It’s just really heartwarming,” Levitt said, “the amount of support [from] our customers . . . because we’re here for them as well.”