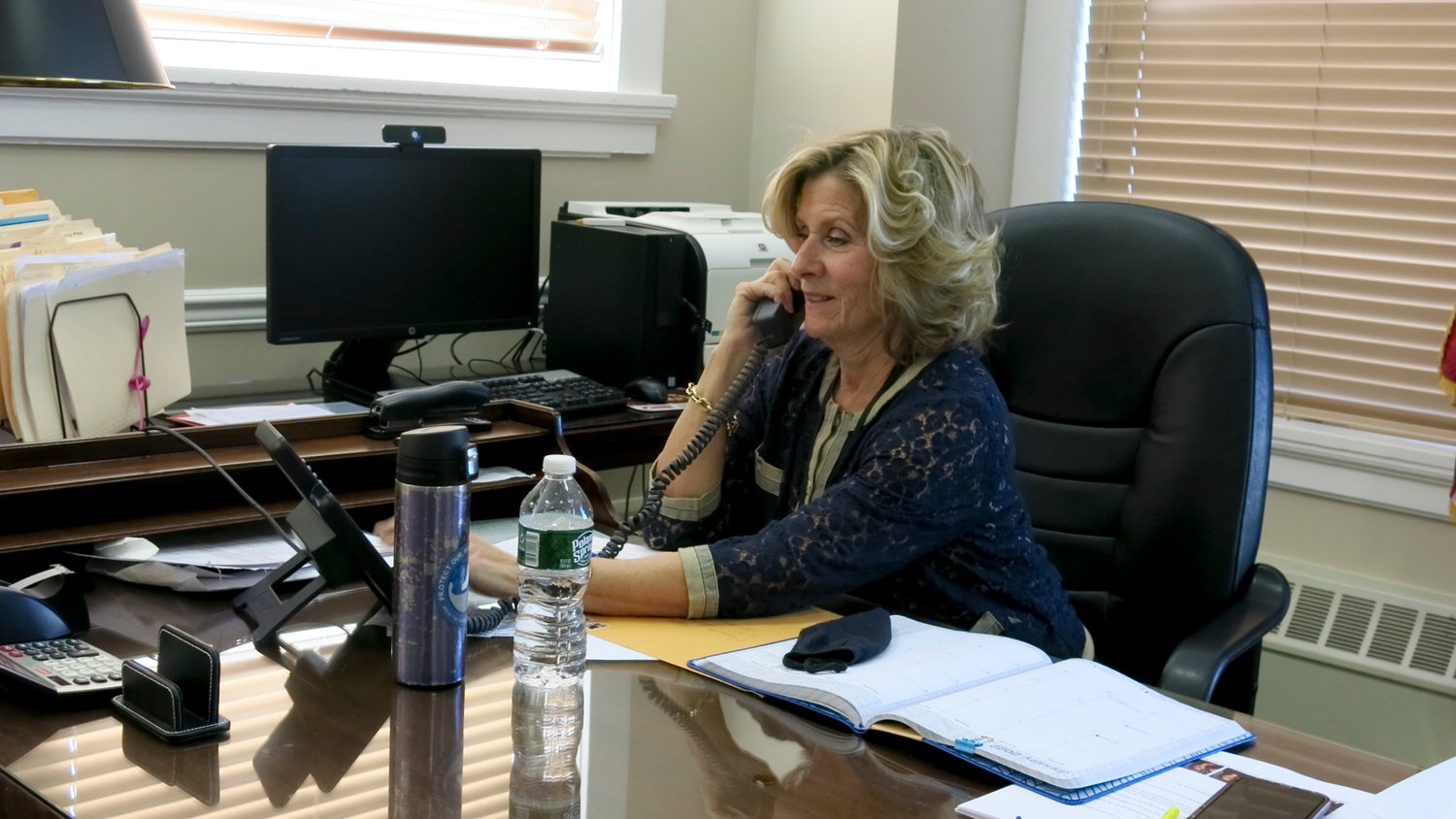 Mayor Pam Panzenbeck said she would like to slow the pace of the $1.25 billion Garvies Point project, bring new retail businesses to Glen Street and serve as an advocate for the city's schools.
Laura Lane/Herald
By Laura Lane

Glen Cove's new mayor, Republican Pam Panzenbeck, says she isn't particularly political, and plans to take a different approach to governing — one that just might work.

"My goal is to work in a bipartisan way with my City Council," said the lifelong Glen Cover. "You don't look at people's parties, you look for people who are good people with a like mind and you all work together. I like for everyone to be involved, because it builds enthusiasm and makes for success in the end."

Other elected leaders have touted their devotion to bipartisanship, but Panzenbeck says she is also committed to being kind, humble and amenable, and plans to bring those trust-building attributes to Glen Cove.

She is the "sweetest thing," but also firm in her beliefs, said newly elected Councilwoman Barbara Peebles, who has known Panzenbeck for roughly 10 years. Both attend St. Patrick's Church, and Peebles was the city's deputy mayor from 2014 to 2017, when Panzenbeck was a councilwoman.

"The number one reason why I know she will be a great mayor is her fairness and integrity," Peebles said. "In my opinion, that is key, especially now more than ever."

Panzenbeck, a business and computer education teacher at Levittown Central School District for 34 years, retired in 2008. "I never expected to be in politics," she said. "Since I retired, my life has been a life of volunteerism. But I don't like to talk about it, because talking about it cheapens it."

She was a member of the Glen Cove Hospital Auxiliary, and is active at St. Patrick's, where she serves as a lector, was the liaison to the Glen Cove Youth and Senior Advisory boards, and once sat on the fundraising boards.

"Everyone in Glen Cove knows and loves Pam," McNaughton said. "I've never met anyone like her. She cares about people."

Panzenbeck first ran for the City Council in 2009, and lost, but ran again in 2013, and won. She was re-elected twice, but lost in a blue wave in 2019 that ended the Republican majority in the city government. She never planned to run for mayor, deciding to at the relative last minute, in March.

Panzenbeck described herself as a young 68-year-old who doesn't take the elevator. She and her husband of 41 years, Bob, have two sons, 39 and 37, a daughter, 34, and four grandchildren.

Growing up in Glen Cove made her who she is today, she said. She lived in the Landing, and her neighbors were her extended family. They taught her to love God and her country, to cherish and respect the flag and to respect and honor veterans, she said.

"You could never get into trouble, because everyone knew your aunt or your uncle," she said with a smile. "We had double jump ropes at the end of my driveway going all the time, and when a mom jumped in, it was the highlight of our day. My childhood was magical."

She still keeps in touch with her fourth-grade class from Landing Elementary School, and catches up with them at reunions.

Although she loves Glen Cove, Panzenbeck said she wishes it were more like the city of her youth. "I would like everything to return to what it had been," she said. "Being kind, doing good deeds. I think people need to care about other people."

Her children were raised to be good neighbors. When it snowed, they shoveled their neighbors' sidewalks and driveways, Panzenbeck said — free of charge. It was hard for a 10-year-old to turn down $10, but as far as she was concerned, it would have been wrong to accept it.

When she spoke with the Herald, Panzenbeck had been mayor for six days. Although she said she wouldn't be making any major changes yet, she was considering a few.

One of her top priorities is to renovate the city golf course. It's one of the features that lead people to buy a home here, she said. The main building, referred to simply as the "golf house," is being razed. An avid golfer, Panzenbeck said she knows firsthand how bad the conditions are. For starters, she'd like to overhaul the driving range, which she said is "pretty much nonexistent."

The parks need improvements too — especially Morgan Park, which has deteriorated. The sea wall needs work, as do the crumbling cement steps that ascend from the shore to the park. And residents have requested another set of restrooms.

She would like to slow the pace of work at the $1.25 billion Garvies Point project. Developers are currently set to meet with the city planning board, seeking approval for the construction of another building.

"We just want it to go step by step, and have a little bit of breathing time in between [projects]," Panzenbeck explained. "Let's see who moves in and what's being utilized before we jump onto the next thing."

She is focused on bringing retail shops to the section of Glen Street near City Hall, and plans to form a business advisory board.

Glen Cove's comptroller under Tenke, Michael Piccirillo, will remain in the job. Panzenbeck is working with him to put the city in a strong financial position. She expects to adhere to Tenke's budget and reduce  spending, without laying off city workers. People spend what they're given, she said. She will encourage them to spend less.

Panzenbeck said she wants to forge a positive relationship with Schools Superintendent Dr. Maria Rianna, and be an advocate for the schools. She plans to visit them and share what she sees with the community. She wants to encourage kindness among young people, and to challenge them to do acts of kindness, perhaps with a mayoral award for good service.

And in the next few weeks, a city facility will open where residents can receive Covid vaccines and boosters.

"My talent is getting people together," the new mayor said. "I'm not a 'me' person. "I'm a 'we' person. This is a thankless job. You do it because you love your community."