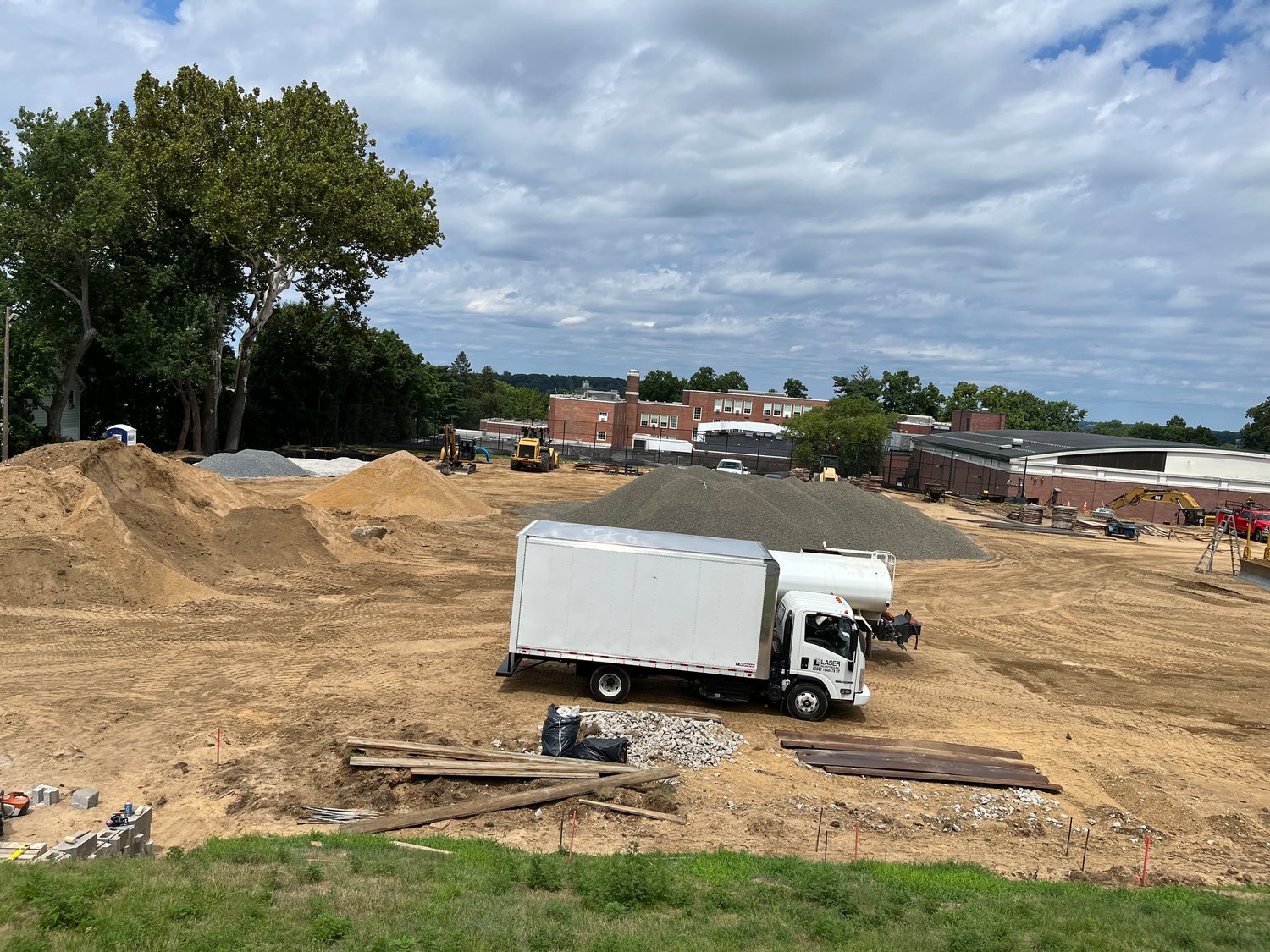 The new turf field will replace the old upper athletic field at the Oyster Bay High School.
Will Sheeline/Herald
By Will Sheeline

People driving past Oyster Bay High School will probably notice the large mounds of stone and debris piled high in the attached parking lot. While at first glance they may merely look like an eyesore, they are an important part of the Oyster Bay Central School District’s current construction of a new turf field for the high school.
Earlier this year, the school district passed a $30 million bond to help pay for a wide range of new features and improvements. One of the most popular of these is the replacement of the high school’s old grass field with a modern turf field.
Turf has many benefits over grass fields, not the least of which is providing a better playing surface for young athletes. Turf is more forgiving, allowing players to move more freely and with a reduced chance of rolling their ankles in high grass.
Since it doesn’t grow, maintenance costs are also reduced in the long-term. The stone and debris that are piled in the parking lot will be used to provide a base to put the turf on so that no grass shoots can break through, according to Board of Education President Laurie Kowalsky.
“As part of the construction, they put stone underneath and then they kind of lay the carpet over the stone and make sure there’s adequate drainage,” Kowalsky said. “So, we’re using the parking lot as a storage area to store the things we need for construction.”


The project was begun in early July, and the updates are expected to be done by Labor Day of this year. The bill for the turf installation is roughly $2.5 million and includes some other features for the space.
Most notably, the money will also cover the cost of adding new stands for parents, teachers and students to sit in while they enjoy watching student-athletes play a wide range of sports on the new field. The turf will be designed so that nearly every type of sport, excluding baseball, will be able to be played on it, from soccer to football to both men and women’s lacrosse.
Francesco Ianni, the Superintendent of Schools for the district since 2021, explained that getting a better field for the high school has been one of his top priorities since he began working here over a year and a half ago.
“One of the things I noticed was that the upper field where the turf is going to be installed was pretty much barely used and not great in terms of surface,” he said. “Around the northeastern and southeastern corner, it was kind of overgrown and it didn’t really look up to par.”
Another important aspect of the new field is that it will allow for better drainage than a traditional grass field. Rather than soaking up the field and making it muddy, the rainwater will percolate through the turf and then the rocks, allowing Oyster Bay High School’s athletes to play their games in rain or shine.
Although the turf field will not be quite ready by the time training starts for sports this fall, the high school has planned for this. Most teams will be practicing and playing on the district’s other turf field at James H. Vernon School, while the football team will continue to practice on the one at Theodore Roosevelt Memorial Park.
Sharon Lasher, Oyster Bay High School’s principal, said she was excited the school will finally have a turf field of their own. Numerous parents in the district had given their support to the project, she said, which was a significant reason why the $30 million bond ended up passing, and people can’t wait to see their local teams playing on the new turf.
“We’re super excited to have another turf field for our students to enjoy,” Lasher said. “Athletics is a big part of Oyster Bay High School so we’re very happy.”
Report an inappropriate comment