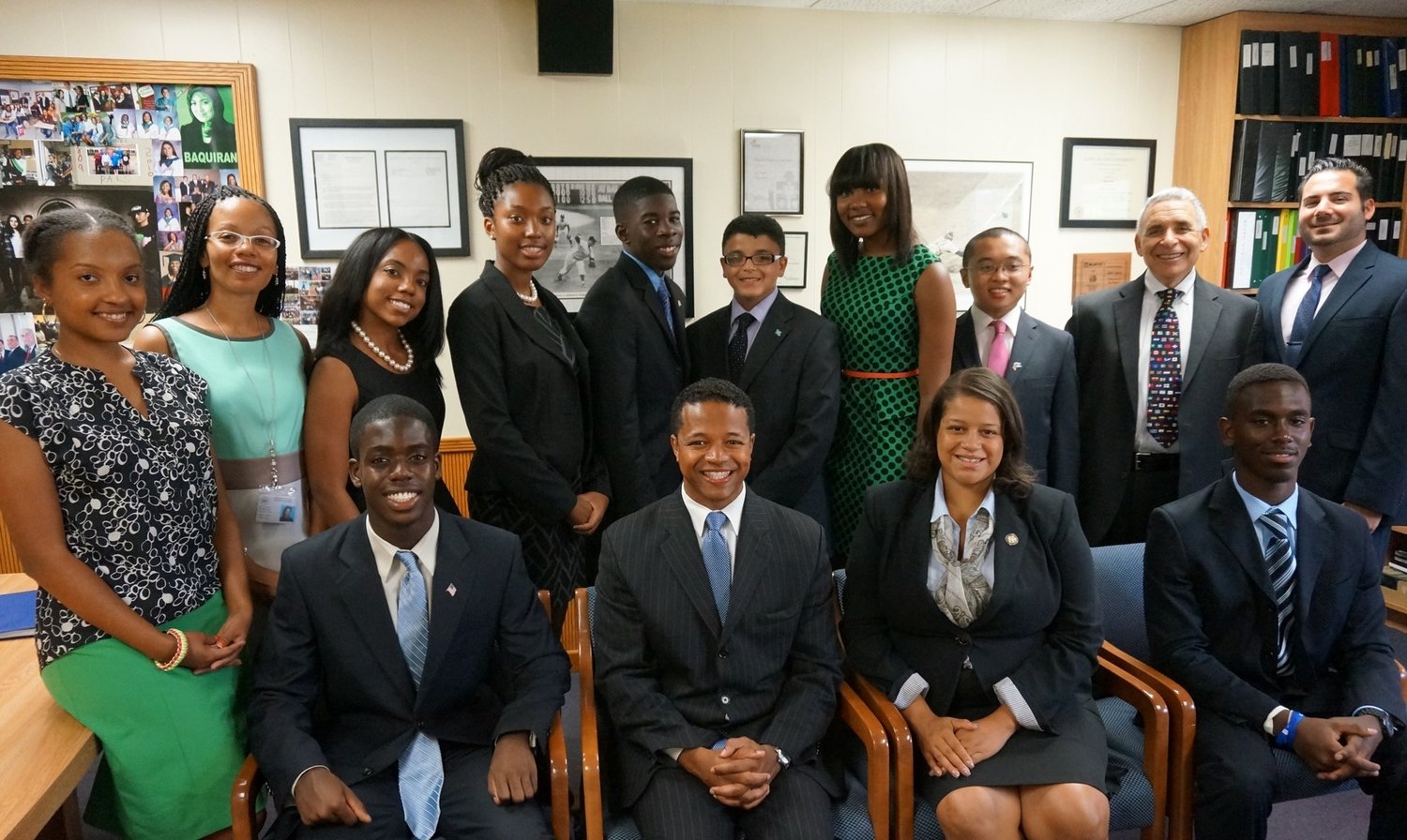 Frank Nuara, back right, the chair of the social studies department at the high school, said students are fond of the African diaspora course.
Courtesy Consuelo Butron 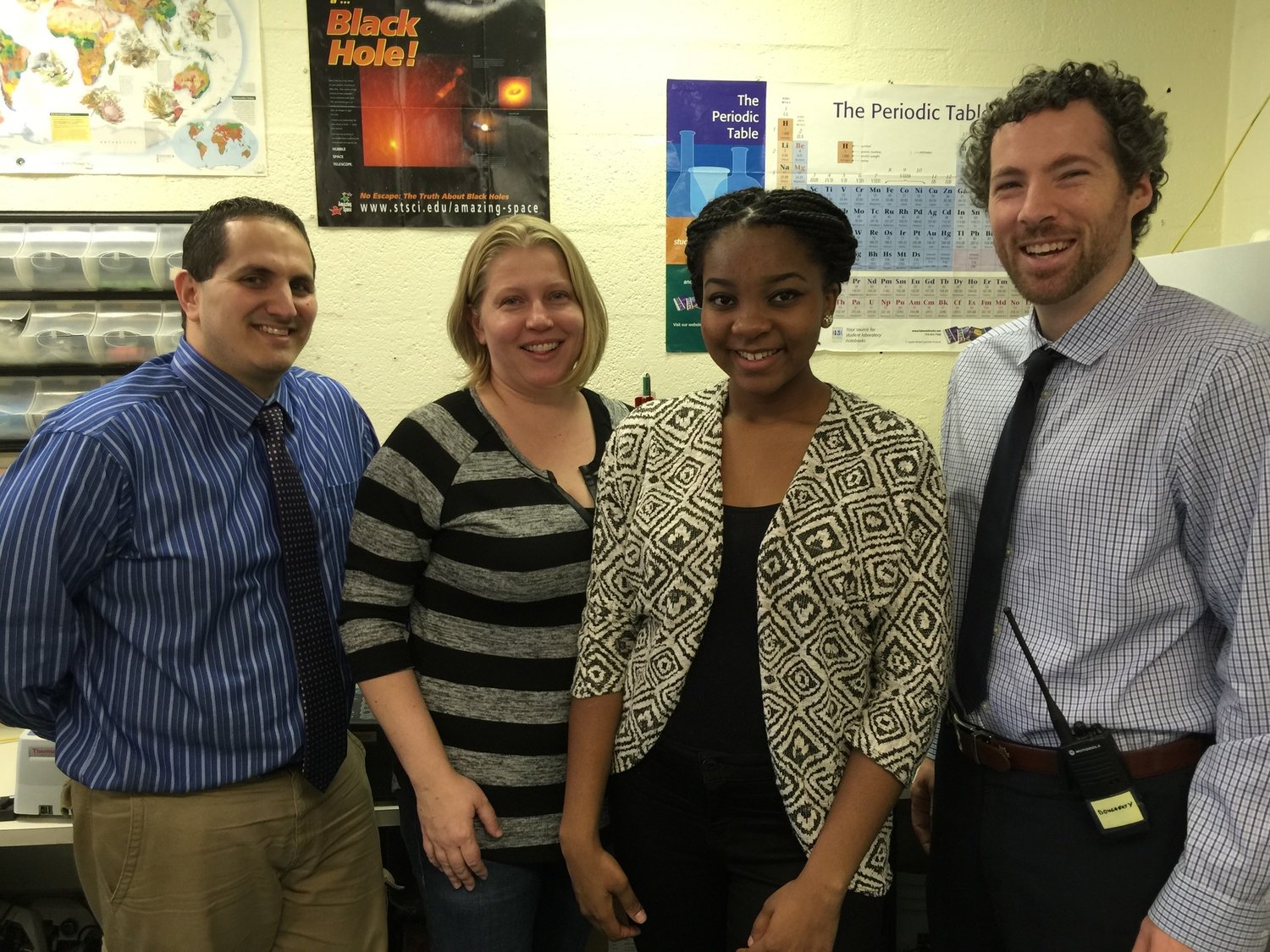 African “greatness,” as Agoro put it, was on display at Elmont Memorial in 2015 and 2016, when students Augusta Uwamanzu-Nna and Harold Ekeh, both of Nigerian descent, were accepted by all eight Ivy League schools.
Herald file photo
Previous Next

The history of African empires that thrived between the 14th and 19th centuries, African culture and its diffusion with European and Asian culture, and the contributions of Black Americans to U.S. society are the topics of a course offered at Elmont Memorial High School that focuses on the African diaspora, or the mass movement of Africans throughout the world.

During the first half of a semester when the class is offered, it focuses on the development of Africa and the culture of African empires of the past, as well as how African culture has spread throughout the world through trade, migration and, of course, slavery, eventually combining with other cultures. Later in the semester, African-American culture, and how Black Americans “have added to American society,” become the focal point of the class, said Frank Nuara, chair of the social studies department at the high school.

The districtwide elective was first offered during the 2020-21 school year, when it was taught virtually because of the pandemic.

Nuara said that students who sign up for the class are often eager to discover what it focuses on. “A lot of students don’t know what to expect when signing up for it,” he said, “and throughout the course they really get an in-depth understanding of African culture, which they like.” Nuara said that the class is popular among students, which has become more evident recently with the return to in-person classes. “Having the students back in the building, you really see the enjoyment level of being in that course,” he said.

The district began creating the class before the social justice movement sparked by the killing of George Floyd in May 2020, Nuara explained, because it wanted to offer a course about the overall history of Africa. “We felt it was needed just to have an understanding of African culture,” he said, adding that alumni who visit the high school often say they wished they had learned more about the subject.

While another elective focuses on social issues facing the Black community in America today, Nuara said that students enjoy the African diaspora class because of its focus on the less pressing aspects of African and Black experience. “They are enjoying looking at the positive aspects of the African experience also,” he said.

Kareem Agoro, who taught the class last year, said the history of African empires is largely forgotten in today’s society. While the course focuses primarily on the African diaspora throughout the world, he said, the history of African “greatness” in antiquity is detailed extensively through a focus on African empires that dominated the continent long before the rise of the Western world and Africa’s colonization. “Africa featured thriving civilizations,” Agoro said, adding that African nations established trade relations early with Asia and Europe, a topic that is discussed in the class.

Agoro said he focused on the changes that took place in Africa when European colonization began, as well as the eventual mingling of African cultures and the “sharing of ideas” with those of the Western world.

Ultimately, however, he said, “The class focuses on how Africans thrive in other parts of the world.”

The class wraps up nicely, Agoro said, with discussion of the “positive impacts” of African Americans to U.S. society. Students learn about their musical and culinary contributions, he said, and key individuals throughout African-American history.

The class is important because it offers students the opportunity to understand themselves — and one other — better, Agoro said. “So we all know about each other and the origins of Africa,” he said, summarizing the course’s purpose. “We forget about Africa’s impact.”