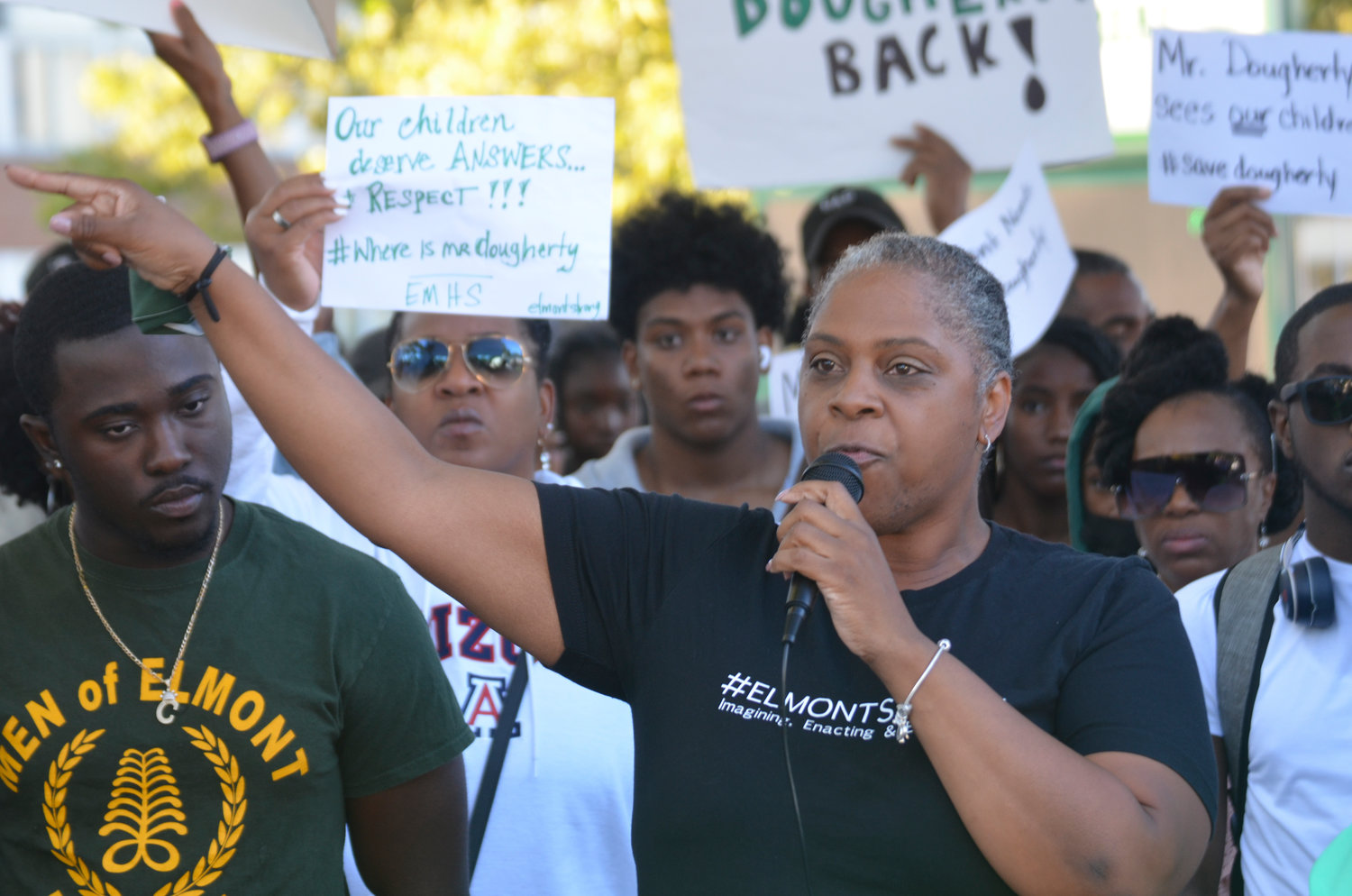 Protests erupted at Elmont Memorial High School after Principal Kevin Dougherty was placed on administrative leave on Aug. 31 and Sept. 1. The reasons for Dougherty’s leave were still unknown at press time.

District Superintendent James Grossane stated in an Aug. 30 release that Dougherty was “taking a sabbatical leave of absence for the 2022-2023 school year.” Grossane added, “The district will be appointing an acting principal for the coming year.”

The lack of an explanation from the district left many wondering about its intentions, because Men of Elmont advisers Jon Johnson and Ray Ramos, both close colleagues of Dougherty’s, were banned from school premises, according to both men. All three are advisers to Men of Elmont, a mentoring program for boys at the high school that Dougherty created in 2016. The program helps prepares them for life after high school with activities ranging from college visits to discussions of social issues to networking with graduates.

“He’s more than a principal, especially to me,” senior Terrell Lewis said of Dougherty. “He’s been a father figure since I got to high school.”

Lewis added that Dougherty had played an important role in his development. “He’s probably waking up at 4 o’clock just to work out,” said Lewis. “He’s involved in so many other things — helping clubs, helping other people, families. He helps people. He’s just such a genuine guy, and he’s more than a principal. He makes me feel like I’m his son, and I knew that from the bottom of my heart.”

Dougherty, Lewis said, taught him to be like a father figure for others in the Men of Elmont program. “They’re trying to instill in you that you can start from wherever [and you] can still succeed in life,” he said, adding, “There’s no good reason they could possibly give to take him away.”

Dougherty is a former resident of Harlem. He has two children, and was known for taking part in a food donation effort every Wednesday.

A petition opposing his leave on change.org had gathered more than 1,000 signatures as of last Friday, and Elmont High students and parents said they planned to continue protesting until their voices were heard.

Assemblywoman Michaelle Solages, who spoke at a protest on Sept. 2, said she had worked with Dougherty many times, and that she was “truly grateful for his leadership.”

“He’s a great individual, personally and professionally,” Solages said. “It feels like a loss not having him at the school.”

She urged the district to explain its decision, saying, “It’s only right for us to at least just find out the reasoning behind the situation.”

Johnson told the Herald, “We were told by hearsay, myself and Ray [Ramos], that the district has deemed that we cannot be a part of the Men of Elmont program.” Johnson said that neither he nor Ramos could enter school buildings or grounds.

Men of Elmont works with several dozen Black students from the high school. Johnson said that it has never received support from the district, despite the fact that it has been in existence for six years. Last year, the Board of Education instituted My Brother’s Keeper, the mentorship program founded by former President Barack Obama. The program will provide oversight for Men of Elmont.

Ramos echoed that sentiment, saying, “Nobody’s going to get the care and concern and time to have the expertise to” run the program like Dougherty.

“The program is an incredible program,” Johnson said. “We’ve made many strides. But like I said, we’ve never gotten the backing of the district.”

“The school district has not contacted me to say anything,” he added. “It’s been through word of mouth, and that right there isn’t fair.”

“Where is the transparency with regards to the community?” asked Ramos. “Is this the first beginnings of undoing the work that this man has done?”

“What have I done to be banned from a public building?” Johnson. “They feel they don’t have to give any answers.”

For the past 20 years, Johnson has been the president of Elmont Cardinal Sports Club, a youth-based organization that is over 50 years old. The school’s actions, he said, are an attack on his character and a “real injustice.”

“Where did it all go wrong?” asked Ramos. “Where did the disconnect happen? Was this the plan all along, to put this under another, bigger umbrella program, My Brother’s Keeper?”

Both men said they believed the school’s silence was unfair and disrespectful to the Elmont community, which they strongly believe has progressed so much under Dougherty and the Men of Elmont program.

On Sept. 2, after the protests, Grossane announced that Taryn Johnson, the district’s superintendent, would serve as acting principal of the high school until further notice.