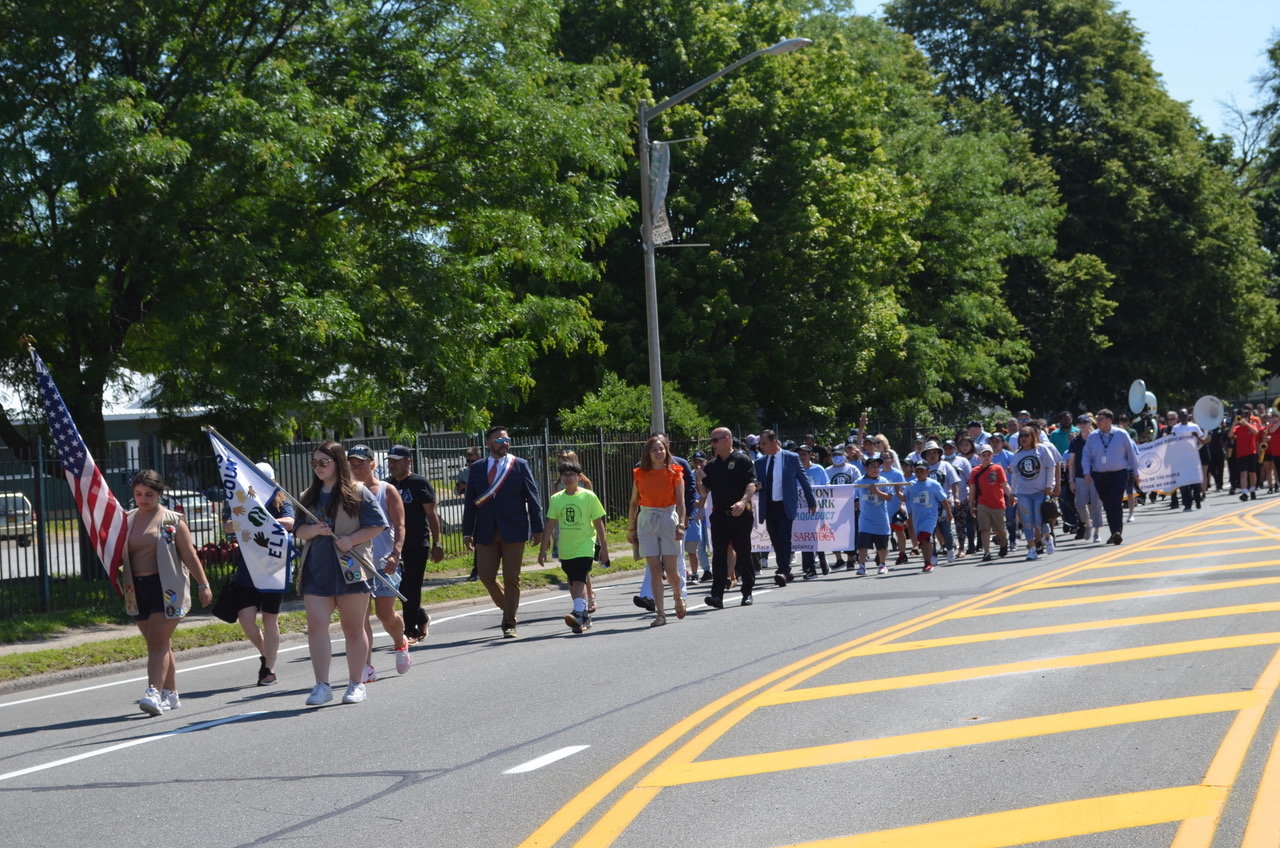 It's a sign of what's to come”
Claudine Hall, Elmont community leader
By Robert Traverso

The 14th annual Elmont Belmont Paul Sapienza Parade was held outdoors and without restrictions on June 4 for the first time since 2020, signaling a return to pre-pandemic norms for Elmont.

The parade is named after the late Sapienza’s Bake Shop owner and Elmont leader and serves as the traditional kickoff to the Belmont Stakes.

The event was cancelled in 2020 because of the onset of the pandemic and was held indoors last year at the Floral Park Memorial High School auditorium with COVID-19-related adjustments.

This year, the parade returned to its traditional route down Hempstead Turnpike before culminating at Belmont Park in Elmont. After the parade, a community celebration was held at Belmont Park for the first time since 2019.

One constant of the parade is that it was named in honor of Sapienza, a former president of the Elmont Chamber of Commerce who died unexpectedly in December 2020.

"Paul was just one of a kind, a fixture in this community," said Pat Boyle, executive director of Gateway Youth Outreach, which serves the students of Elmont. "He was the kind of guy who would step in and do anything for Elmont. It's altogether fitting that we honor his memory as a community every year.”

One of the marchers at the parade, which draws hundreds of participants each year, was Sapienza’s son, Andrew, who continues to operate the bakeshop in Elmont.

“He’s just like his dad — he jumped in and did everything his dad would have done — he was so instrumental,” said Claudine Hall, a community leader who proposed naming the parade in Sapienza’s honor. “The way that his son became such an active part of helping out the parade this year was awesome.”

Next year, Hall said she plans to meet with the Elmont Chamber of Commerce and shopkeepers along the parade route to ensure a more robust business presence at the parade and to boost overall turnout now that COVID-19 restrictions are lessening.

The parade kicked off from the parking lot of the Alva T. Stanforth Sports Complex at 10 a.m. and headed west down Hempstead Turnpike before ending at Belmont Park. New York Racing Association workers offered lunch to parade participants inside the Belmont Café for the first time since 2019 and, for the first time ever, distributed free tickets to residents to the June 11 Belmont Stakes.

The parade’s return to its original one-and-one-quarter-mile route culminating in the community celebration was heralded by community leaders and residents as a sign that the Elmont community has entered a new normal with the worst of the pandemic in the past.

“It was nice to get out and see the community,” said Romello Williams, a sophomore at Sewanhaka High School, who performed at the parade with the dance studio Tip Tap Toe on Meacham Avenue in Elmont.

“With us being locked up and locked down and not being able to do anything, it was so needed,” Hall said. “We let people know that we’re back. It’s a sign of what’s to come.”