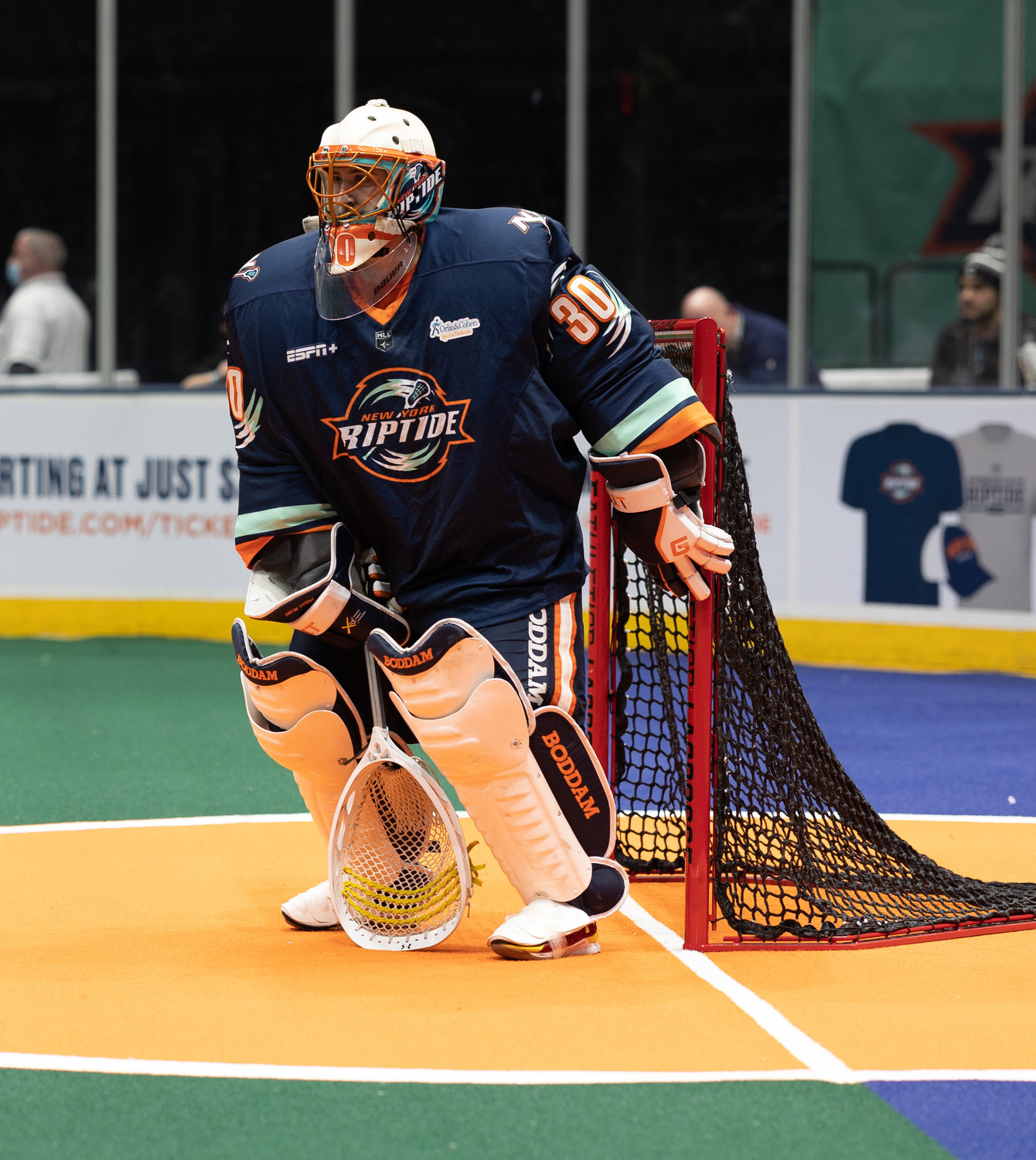 Steven Orleman played strong between the pipes for the Riptide after entering Saturday's game late in the first half.
Courtesy New York Riptide/Stacey Salter Moore
By Tony Bellissimo

Itching to get into the win column after dropping its first three games of the 2021-22 National Lacrosse League campaign by a total of 7 goals, the New York Riptide started slow Saturday night following a 33-day layoff due to two bye weeks and a pair of postponements.

The Riptide was unable to break a season-long trend of digging an early hole and spotted expansion Panther City Lacrosse Club the first four goals and never led in a heartbreaking 13-12 overtime defeat at Nassau Coliseum. The victory was the first in franchise history for Panther City, which entered the matchup 0-4. Now New York is saddled with that record and will try to get off the snide when it travels to Philadelphia on Sunday for a 4 p.m. faceoff.

“The second half was amazing and I think that’s the kind of lacrosse we can play,” Riptide head coach Dan Ladouceur said. “These guys haven’t quit since the day they came together. It’s the elusive 60-minute game that we’re after.”

It was a frantic final seven minutes of regulation and nearly 11 minutes of overtime. Both teams had potential game-winning OT goals negated by a matter of inches. Patrick Dodds finally won it for Panther City, which squandered a 9-3 second-half lead, when he completed a hat trick at 10:50 of the extra session.

Panther City goaltender Kevin Orleman, the brother of Riptide goalie Steven Orleman, was stellar most of the night and finished with 41 saves in the win. The Orlemans were teammates on the Georgia Storm last season. Steven Orleman entered the game in relief of Gowah Abrams with about two minutes remaining in the first half and was outstanding in making 16 stops.

“Steven came in and did a really good job,” Ladouceur said.

It was also a family affair for the Teats. Jeff’s father Dan serves as Panther City’s offensive coordinator. According to the Riptide’s 24-year-old star rookie, it was the first time in his life that his father was on the opposing bench.

The Riptide donned custom-designed Every Child Matters warm-up shirts during the pregame to raise awareness and funds to honor the indigenous children who attend residential schools across North America. Replica shirts can be purchased online at NLLShop.com

The next home game at Nassau Coliseum is Saturday, Jan. 29 against Buffalo features a unique theme. It’s Superhero Night and the Riptide unveiled a special edition “Healthcare Heroes Jersey” to honor the unwavering commitment and heroic care given by healthcare workers nationwide to individuals impacted by COVID-19. A limited quantity of the jerseys are available for purchase on NewYorkRiptide.com. Fans who purchase a jersey will have the ability to customize it with their name on the back or the name of their personal healthcare hero. All proceeds ($50) from every jersey sold will benefit St. Jude Children’s Research Hospital.

Fans can take advantage of the Riptide’s “Holiday Pack” and get a pair of seats and a team hoodie for $72. Until further notice, all guests ages 2 and up must wear a mask while inside the arena except when eating or drinking.