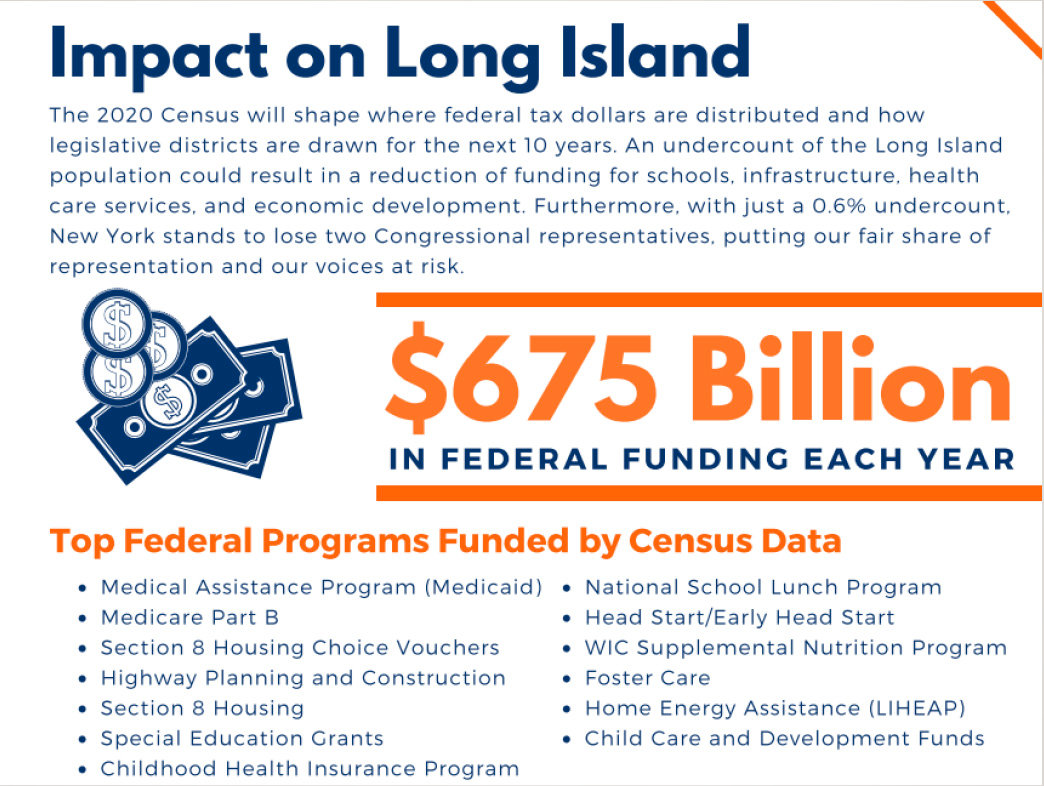 The 2020 Census will impact how federal money is distributed for programs and services and how legislative districts are developed.
Nassau County
By Jeff Bessen

It is stand up and be counted time. April 1 is Census Day, and it is no joke that responding to the federal government’s questionnaire — no matter how you do it — is important, according to officials.

Jordan Carmon, a senior adviser to Nassau County Executive Laura Curran, and Gabriela Castillo, a government affairs liaison in the county executive’s office, stumped for the census at the Five Towns Democratic Club meeting at the Hewlett-Woodmere Public Library on Jan. 14.

The census was considered so critical by the Founding Fathers that it was included in the Constitution. It ensures that every community receives the appropriate number of government representatives. “Under counts make or break communities,” Carmon said, explaining why it is vital that everyone participates.

Census numbers impact distribution of federal money for the next 10 years, development of legislative districts, and programs and services ranging from highway construction to Medicaid and the national school lunch program.

More than 316,000 people, roughly 23 percent of Nassau’s population, live in what Carmon and Castillo described as “hard-to-count” communities where the primary language is not English and/or there is a dominant immigrant population that might fear federal government agencies such as Immigration and Customs Enforcement, known as ICE. Elmont, Freeport, Glen Cove, Long Beach and Valley Stream are a few of those hard-to-count communities. Homeless, people who move frequently, renters and students are also considered difficult to count, along with disabled people, migrant workers, refugees and seniors.

“We looked to bring community partners to the table to discuss plans with leaders of diverse communities from chambers of commerce to religious leaders to have effective outreach,” Castillo said.

To help ensure the accuracy of the census, thousands of people are expected to be hired through offices in Garden City and Melville to collect the information on Long Island. Most households will receive what the census officials are called “an invitation” in March to take part and responses can be submitted by mail, phone and online.

“We need to put our heads together to strategize and use every resource available to us to ensure that every resident, no matter their race, immigration status or neighborhood know that they count and that they need to be counted in order to make sure that Nassau counts in 2020,” Curran has said.

From May to August, census canvassers follow up with non-responding households. By August the responding and counting process finishes. In December, the final count is due to the federal government.

For more information, go to https://bit.ly/2RqwW5l.