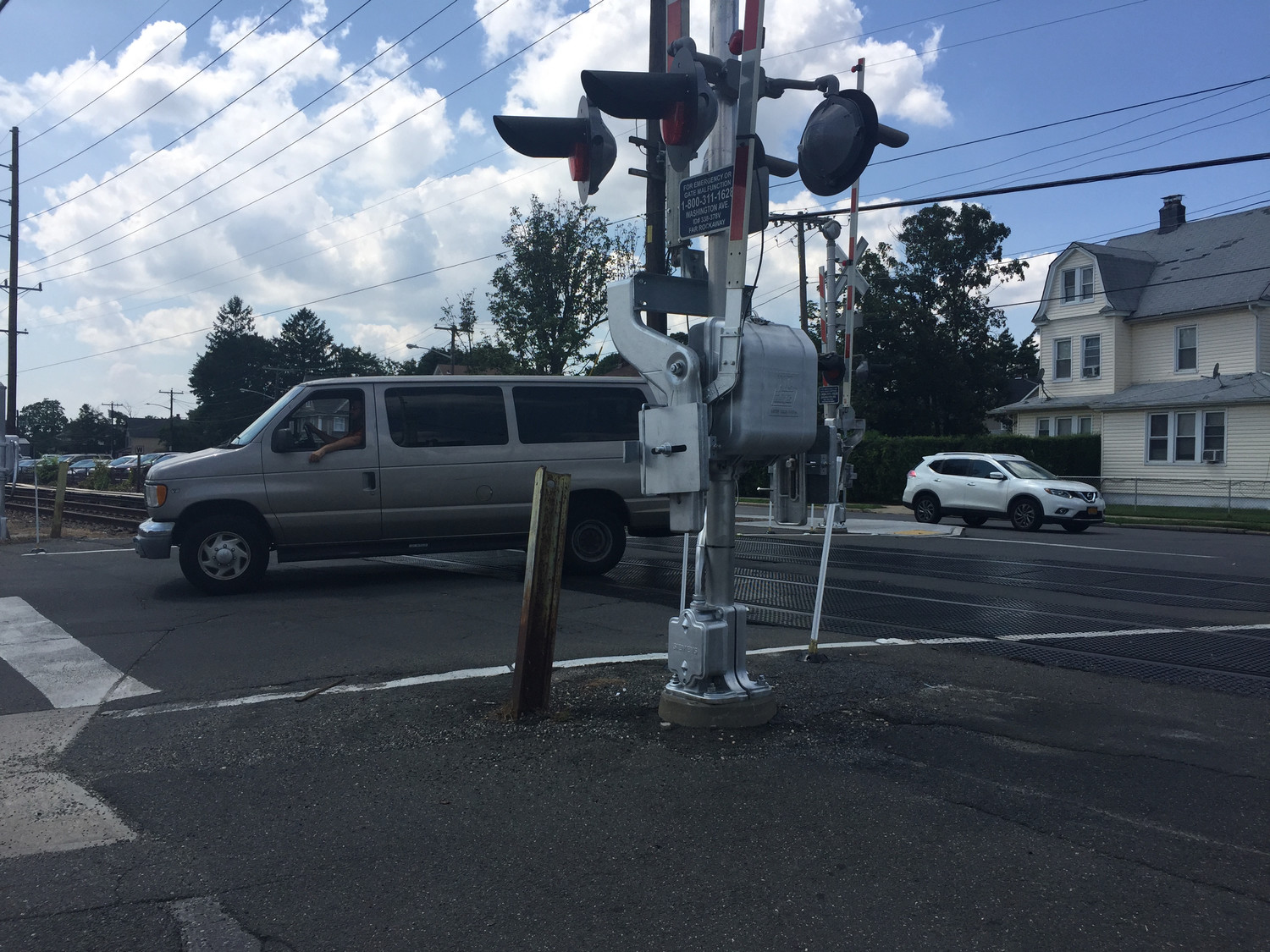 The Washington Avenue Long Island Rail Road crossing is equipped with the Waze app that alerts motorists that they are approaching a LIRR crossing.
Jeffrey Bessen/Herald
Key railroad safety reminders:

Vehicles and pedestrians, must stop when trains approach grade crossings.

It is illegal not to stop a vehicle in front of a railroad grade crossing when auditory and mechanical signals indicate that a train is approaching. Violators can be fined up to $150, face a 15-day imprisonment or both. Second-time violators can face stricter penalties.

It is illegal to drive through, around or under a crossing gate or barrier at a railroad crossing. Violators can be fined $250 to $400, face a 30-day imprisonment or both. Subsequent violations could yield higher penalties.

Never stop in the middle of a railroad crossing. Always finish crossing to the other side.

Cedarhurst at Washington Avenue and Hewlett at Broadway are two of the 30 Long Island Rail Road crossings that now have the Waze app that alerts motorists that they are approaching a LIRR railroad crossing.

This initiative was launched using Waze’s Connected Citizens Program — a free, two-way data share of publicly available traffic information. Metro-North has also since announced its own similar partnership with Waze. All 296 crossings are expected to be on the app by the end of this year.

As part of an overall increased safety initiative, Metropolitan Transportation Authority officials said they have completed its visible railroad crossing safety initiative — five months ahead of schedule as of July 28. The MTA oversees the LIRR.

The safety enhancements on all of the LIRR’s crossings come after an extensive MTA review that found that people following GPS navigation were turning onto tracks instead of parallel roadways. The improvements include flexible, four-feet high reflective delineators, extended roadway markings and reflective devices to alert drivers

“Keeping our customers and our employees safe is at the forefront of our minds in everything that we do at the Long Island Rail Road,” LIRR President Phillip Eng said. “We are consistently implementing innovative approaches — both high-tech and low-tech — to ensure safety, including when it comes to those locations where motorists may encounter our railroad crossings.”

The safety enhancements appear to be having a positive impact. Since the project began in May, the LIRR recorded only three incidents of vehicles on tracks. In contrast to the 29 reports of cars on tracks and 17 grade crossing accidents the LIRR reported in 2017.

“I am pleased to say that it appears that these efforts are paying off,” Eng said. “I want to thank the hardworking LIRR staff who ensured this was done quickly and efficiently.”